What Should the Packers Do with Kurt Benkert? 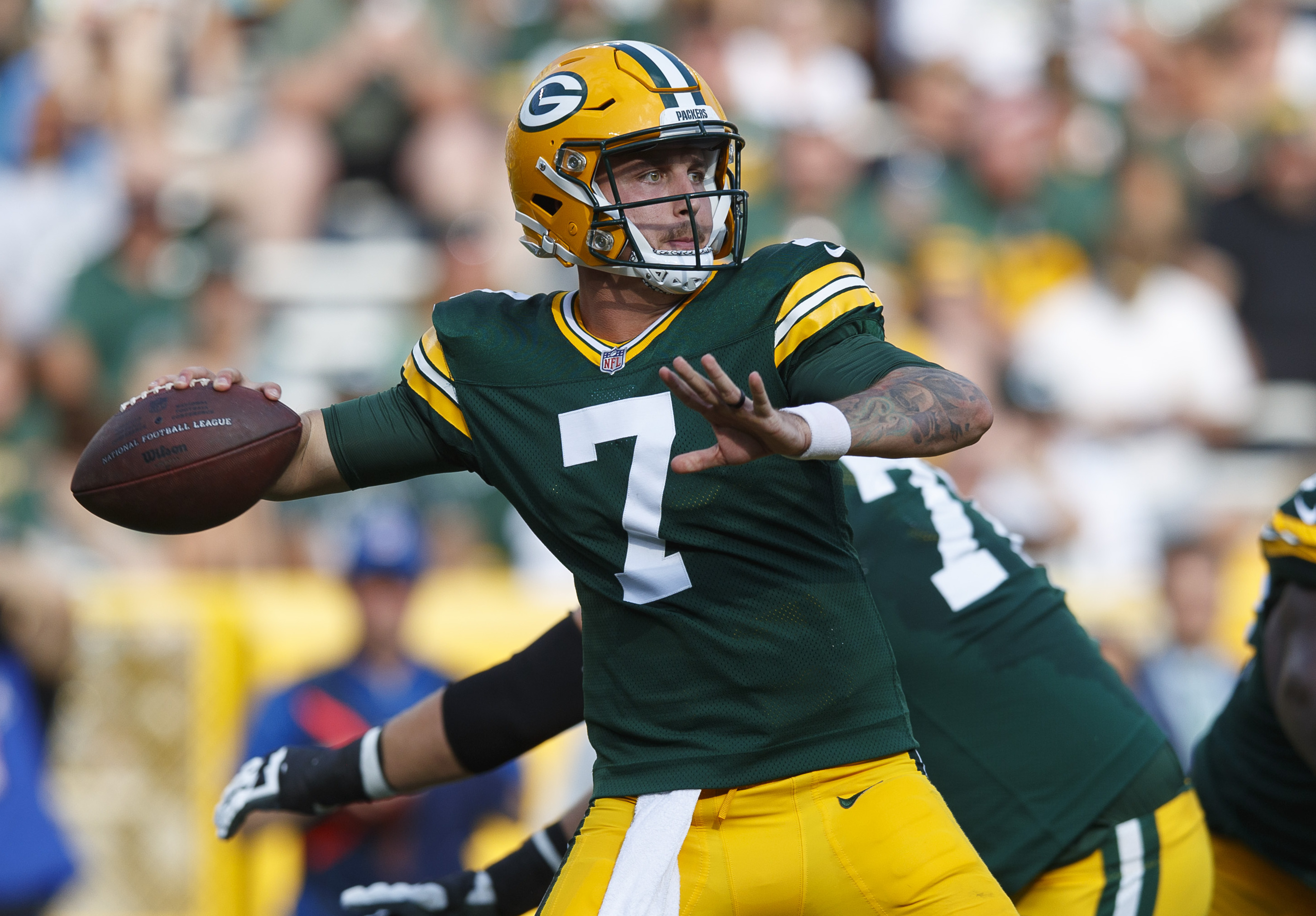 What Should the Packers Do with Kurt Benkert?

The Green Bay Packers have a problem on their hands. It’s a good problem, but a problem, nonetheless. They know Aaron Rodgers is their starting quarterback and that Jordan Love is the backup. But after two preseason games, third stringer Kurt Benkert has showed enough on the field to make a case that the Packers should keep three quarterbacks on their 53-man roster this season.

With Love injured and the Packers unwilling to risk Rodgers in a meaningless preseason game, Benkert got the start against the Jets. He faced many of the Jets starters on defense early in the game and did well in the first half despite playing with mostly with second and third string players on offense.

Benkert finished the game by completing 18-of-25 passes for 151 yards, one touchdown and one interception.

But Benkert’s performance was about more than numbers. He showed a lot of moxie and kept his cool in difficult situations. For example, on consecutive plays, Benkert was stepped on by an offensive lineman shortly after the snap of the ball. On the second of those plays, he was able to get up and run for a five-yard gain because he didn’t panic when the play broke down.

The former Virginia star also led the Packers on an impressive 19-play, 81-yard drive that saw the Packers hold on to the ball for 10:19. On that drive, Benkert helped the Packers convert a 3rd and 5, a 3rd and 8, a 4th and 2, another 3rd and 5, a third and 12 and a 3rd down and 4. Benkert’s ability to come through in the clutch and keep the drive alive was impressive.

“The thing that I’m most proud of is that drive that could have gone to crap, and it didn’t, and we ended up rolling with it,” Benkert said after the game. “I think that’s kind of a testament to how I like to play. Just keep on going. I threw a pick and just got out the next drive and kept it going. Don’t be gun-shy because something went wrong. I just let them know that’s how I play and I’m going to do my best to take care of the football and make plays.”

Benkert was far from perfect. There were clearly some throws he would like to have back including the interception he threw in the second half. When he was on the field with players further down on the depth chart, he did struggle at times.

What is clear is that Benkert has an NFL-caliber arm and has shown some ability to inspire his teammates and overcome adversity. That is a far cry from being ready to start a regular-season NFL game, but he’s certainly making his case for a roster spot.

The Packers typically keep two quarterbacks on the active roster. Last season, they kept three but that was due to the specific circumstances surrounding Covid-19. Green Bay had drafted Love in the first round but because of the pandemic, the rookie had no preseason games and no OTAs to help prepare him for being the backup let alone to step in if anything happened to Rodgers. Last year’s incumbent backup, Tim Boyle, had experience in the system and was at least ready to serve as the team’s top reserve quarterback.

Benkert is not an NFL rookie. He was undrafted after coming out of college in 2018 and spent that season on the Atlanta Falcons practice squad. In 2019, Benkert injured his toe in the preseason and was placed on the season-ending injured reserve. Last year, he again spent the season on the practice squad but was activated for one game in which he did not play.

That’s three training camps and no regular-season snaps for Benkert. Clearly, he has tools that intrigue NFL coaches and scouts but he has yet to play in a regular season game for a reason.

This preseason, Benkert has taken advantage of the opportunity presented to him by Rodgers’ absence from OTAs and Love’s injury during preseason. He has made the most of those chances and showed the coaching staff what he can do.

So, Matt LaFleur and Brian Gutekunst have some tough decisions to make. If they attempt to place Benkert on the practice squad, he will have to pass through waivers and the Packers would run the risk of losing him to another team. If the Packers keep Benkert on the 53-man roster, however, they will have to sacrifice another player who will likely be able to contribute more to the team this season whether it’s at wide receiver, cornerback, safety, tight end or along the offensive line.

One thing is certain, Benkert did his job which is to make the decision a difficult one. “I think Kurt has done a really nice job and [is] definitely going to make it tough on us to decide which way we want to go,” LaFleur admitted.