A 2-11 Stream of Consciousness

A 2-11 Stream of Consciousness

I’m too lazy to organize these thoughts in a meaningful manner. Not after another soul crushing one run loss. So it’s a stream of consciousness for you tonight …

The Mets are 2-11 against the best two teams in the National League. Seven of those games were one run losses. Some people will probably tell you that they were at least in every game, but there are plenty of instances where one run losses show how far you really are from the best teams in the league. Seven of them in a 2-11 stretch, you’re not in anything. You’re far away.

I wanted 6-7 in the last 13. 6-7, even with the Braves going gonzo with a nine game winning streak, would have put them 3.5 back in the East. Not optimal, but making that up would not have been impossible. But 2-11? The math might still work, but anyone who has seen the Mets in that time frame will tell you that the execution just isn’t there.

The Mets can get back into this by taking advantage of a favorable schedule. The next 18 games are against the Nationals and the Marlins. But before you go touting this easy schedule (which I have, but that was before this terrible stretch), think about how many seasons where you, the Met fan, looked at the schedule and saw a ton of games against the Marlins and said “we have an easy schedule”, and then wondered what the hell went wrong after the Mets dropped three out of four, four out of six, five out of eight, to them. If the Mets had gone 6-7 against that California gauntlet, I would have believed that they could have leaned on the Marlins and beat them seven out of eight.

When Carlos Carrasco gave up the home run the Kris Bryant to put the Mets down 2-0 after five pitches, I thought “well here we go again”. But Carrasco was excellent after that, going seven innings and only giving up those two runs. Of all the pitchers that have remained with the Mets all season (meaning the ones that have primarily been with the big club as opposed to the minors, and the ones that haven’t spent too much time on the IL), Carrasco is probably the only one that hasn’t overachieved from their expectations. That goes for starters and relievers. There are extenuating circumstances regarding Carrasco, as missing the first three months with the hamstring injury probably wrecked his season. But Thursday night was a very good sign. 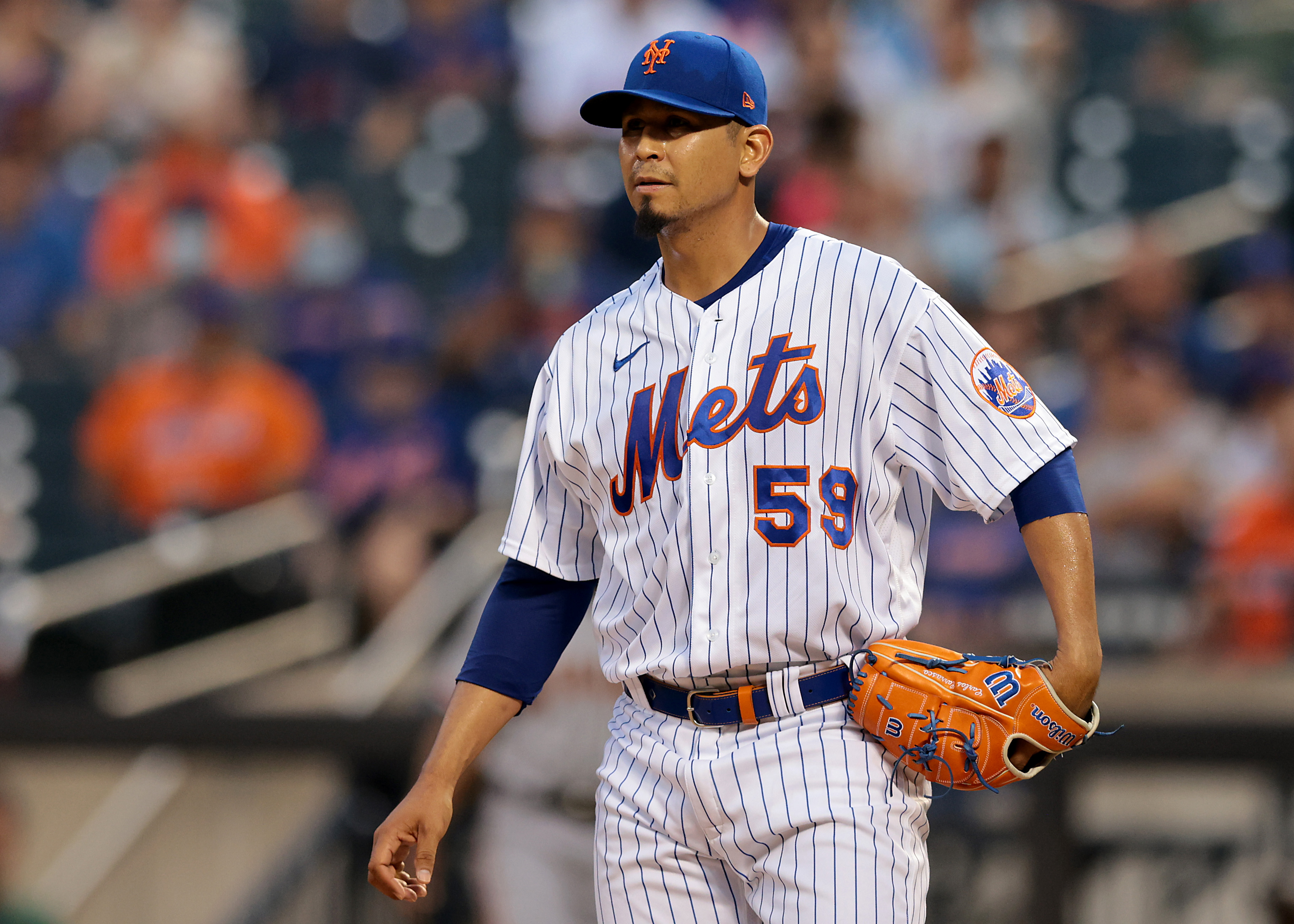 It could have been argued that you could have kept Carrasco in for another inning at 78 pitches, but I understand getting Drury an at-bat as you’re trying desperately to concoct some offense. But that brings in another thought of mine:

With a short bench, Rojas can’t fool around with the righty lineup the rest of the season. For one, the righty lineup doesn’t produce against lefties any more than the regular lineup does. And also, Rojas boxes himself in because he pulls at least one of those righties for a lefty hitter in the middle of the game, like he did by putting Conforto in for Pillar tonight. Then after he uses Drury to pinch hit for Carrasco, he pinch hits McNeil for Patrick Mazeika in the 8th with the bases loaded, which means you have to put in Cisco to catch. But now, with only J.D. Davis left on the bench the rest of the way, Gabe Kapler was able to put in a lefty to face McNeil, and Rojas can’t counter with Davis because Davis has to pinch hit for the pitcher’s spot in the 9th. If you have another player on the bench (which he would have had if he would just play Conforto against a lefty), he could have countered with Davis to face Jose Alvarez. But starting the game with the dumb righty lineup boxed him in for the late innings. Just start Conforto or let Pillar play the whole game.

Also, when you’re talking about the Mets’ offense, they should all watch Darin Ruf’s at bat in the 7th when he drove in the winning run. Shortened his swing, went through the vacated hole. Hugh Quattlebaum should tell them that it’s okay to do this once in a while.

Noah Syndergaard pitched in Brooklyn tonight, and the most notable thing to come out of that was Syndergaard saying after the game that he’s been advised by Dr. Altchek to not throw his slider the rest of the season, and that he made the decision to also not throw his curveball the rest of the season as well. On the one hand, Noah Syndergaard without his slider just isn’t Noah Syndergaard. So why pitch him? But if he’s coming out of the bullpen, being stritcly a fastball/changeup guy might not be the worst thing in the world for a month … as long as he finds Trevor Hoffman for some advice.

Last thing: Gary Cohen is great at shooting clowns, but this might be an all-timer. Gare mentioned during the broadcast that Jose Martinez (remember him?) was playing in a rehab game tonight. It wasn’t even two minutes after Gare mentioned the rehab game that he announced that this happened:

Today is Day 19 of a maximum 20 days on rehab for Martínez. That can be extended if a new injury occurs. pic.twitter.com/L8WQ90OCHb

This almost looks like the injury that Conforto suffered against Arizona when he swung and missed and immediately went down in a heap.

I had forgotten that he existed, then not two minutes after Gare gave me hope that he could help in September, Gare shoots another clown.