Packers Need to Determine How Good Jordan Love Can Be 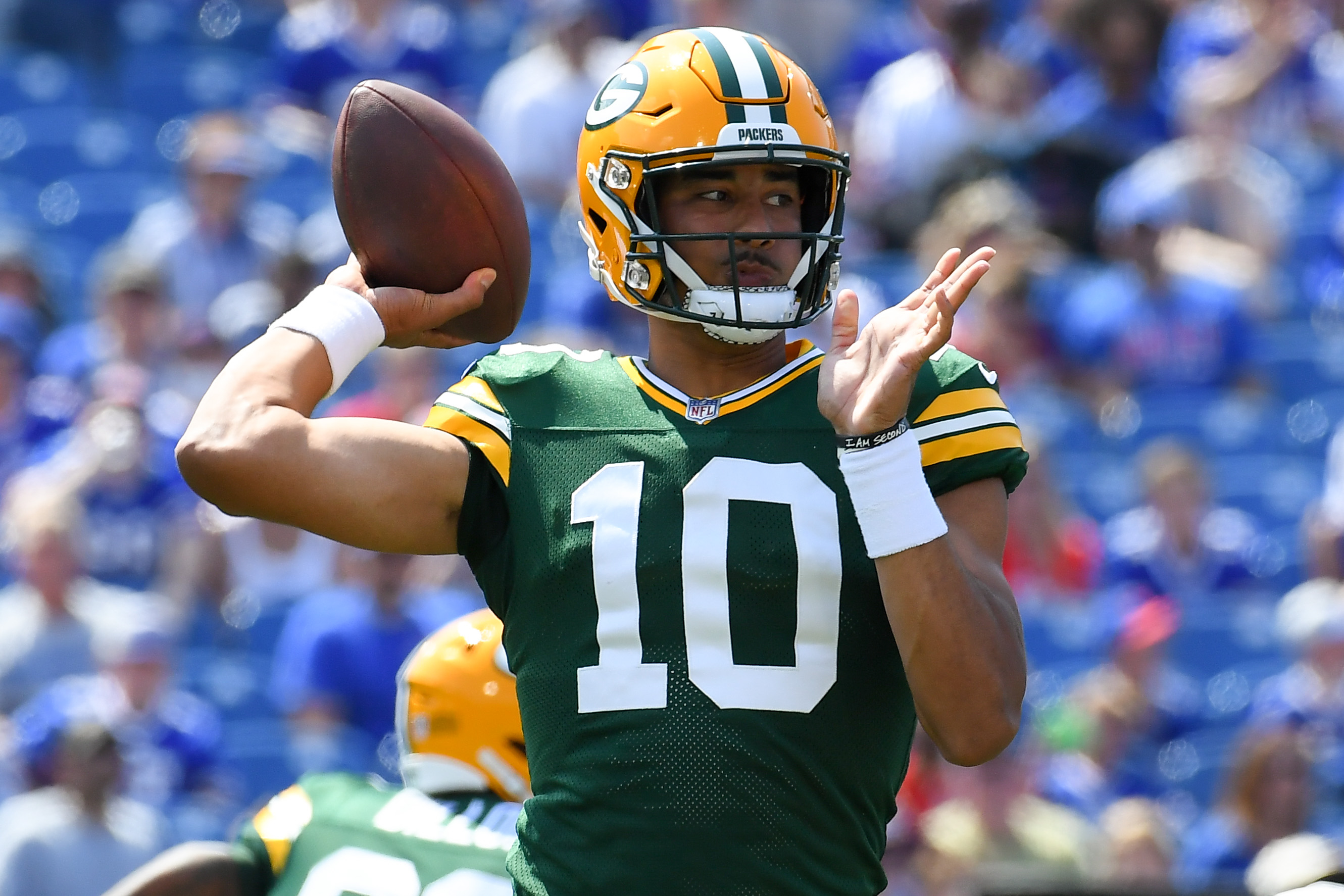 Packers Need to Determine How Good Jordan Love Can Be

With the preseason over, the Packers have finally gotten a longer look at 2020 first-round pick Jordan Love. The former Utah State star played in two of the team’s three games this month and showed some real potential and athletic ability in both games. But he also made his share of mistakes due to inexperience.

The coaching staff, lead by head coach Matt LaFleur and the front office, led by GM Brian Gutekunst, may not have any more meaningful game action to judge Love by before they determine Aaron Rodgers’ future after the 2021 season ends. How ready Love is will be a part of that decision.

Here are some key observations about Love’s performance during the preseason:

One thing that quickly became apparent when watching Love on the field is that he has a strong NFL-caliber arm. The second-year man was able to make several throws against both the Texans and the Bills that showed off his arm strength.

Love can throw deep, can get the ball to the sideline on out routes and make all the throws required of an NFL quarterback.

He still needs some work in other areas, but arm strength is not a concern when discussing Love.

One thing Love showed definitively against the Bills was his ability to use a hard count to draw defenders offsides. He made the defense jump three times against Buffalo and even caused his own offensive linemen to move before the snap on one occasion.

It’s good to see Love acquiring this skill. He obviously learned by observing Rodgers and that means he learned from one of the best at drawing opponents offsides and getting a free play.

Once his teammates get more familiar with his cadence, there should be fewer instances of the offense moving before the snap.

The encouraging thing about seeing Love do this in a preseason game is that it shows he is paying attention to what Rodgers does so well and learning from it. If he can apply this to other areas over the course of this season, it can help speed up his development before the 2022 season when he may be called upon to start.

Love was able to move the ball well in both games he played this preseason. For example, while the Packers didn’t score any points against Buffalo, Love led Green Bay on a 12-play, 74-yard drive, a nine-play, 54-yard drive and a 12-play, 65-yard drive.

Love was able to lead the offense on some lengthy drives, but they ended with a stop on fourth down at the Buffalo one-yard line, an interception and a missed chip shot field goal.

Another thing to remember regarding Love’s performances was that he had a handful of starting offensive players in the lineup when he was on the field. Center Josh Myers and guards Royce Newman and Lucas Patrick were the only likely starters playing with Love in the two preseason games. The Packers did not have Aaron Jones, Davante Adams, Robert Tonyan, Allen Lazard, Marquez Valdes-Scantling, Billy Turner, Elgton Jenkins and David Bakhtiari in the lineup.

Against Buffalo, Love was facing the Bills first string defense for much of the first half and he was still able to move the football despite playing mostly with backups himself. That is also an encouraging sign. You wonder how much better Love could have done with starting players around him against Buffalo.

While there were positive takeaways from the first two games, there were also some struggles. Clearly, Love made some throws he shouldn’t have made and the results were predictably problematic.

For example, Love threw an interception against Buffalo and it came on a play where he threw off his back foot and off balance and into double coverage. Former Packers DB Micah Hyde picked off what was at best a 50-50 ball. Love should have either thrown the ball away or taken a sack but throwing a prayer into the end zone was a definite mistake and it cost him.

He also threw another ball that easily could have been picked off but fortunately, it hit the ground and was incomplete.

These are things that Love can only learn by playing in games so it was a missed opportunity that he was unable to play against the Jets.

Throwing in the red zone is more difficult than passing in the rest of the field. There is less room to work with and therefore more players in less space. It changes the angles and makes it tougher for receivers to get open.

Love looked strong until he got into the red zone and this is an area he needs to work on. The Packers got no points in the first three drives against Buffalo despite reaching the Bills one-yard line, 21-yard line and 10-yard line.

On those three drives, Love completed just one of four passes for seven yards and one interception once the Packers got inside the Buffalo 25.

Overall, Love showed signs of potential and that he still has a lot to learn before becoming a starter in the NFL. It’s not clear how he would do if anything happened to Rodgers and he had to enter a regular-season game and lead his team to victory.

For now, the coaching staff had this to say about their backup quarterback’s performance in the preseason.

“I think for the most part he’s done a nice job,” LaFleur told reporters after the Bills game when asked about Love’s performance. “Certainly, these are teachable moments, and I think you have to experience those and go through those in a game setting to really learn from them. I’m pretty certain that he will learn from those mistakes, and hopefully he doesn’t repeat them.”

If all goes according to plan, Love will not take another meaningful snap during the 2021 regular season. That means the Packers will have to decide on his future based largely on what they’ve seen in the preseason and how he does in practice this season.