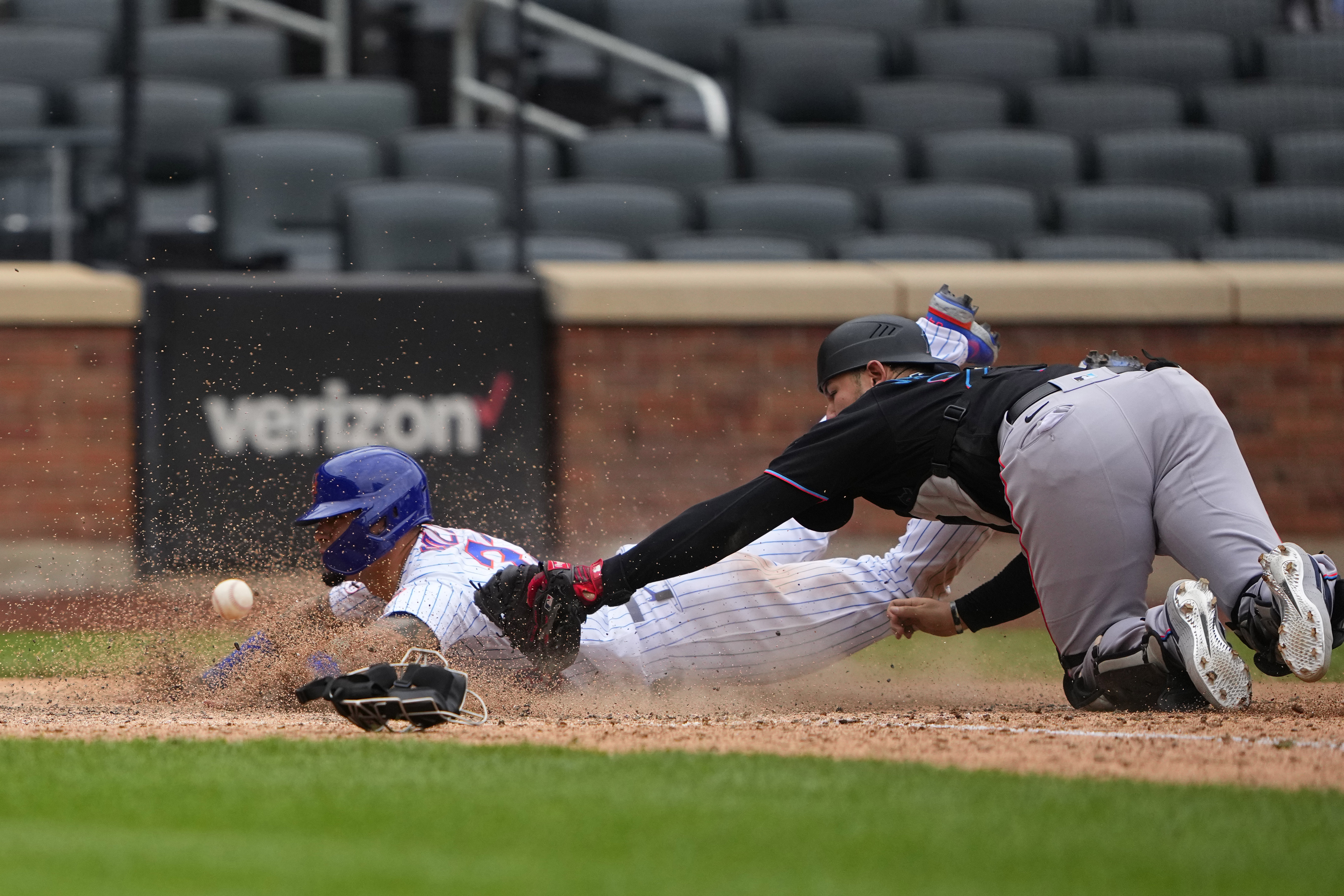 There were eight innings of frustration during a game that actually started on April 11th. Taijuan Walker gave up three runs in four and 2/3’s relief innings and got into a screaming match with Jesus Aguilar. Michael Conforto slammed his bat and helmet down after a foul out in the 8th. (For the “Mets are showing no fire” crowd.) And Jeff McNeil got slammed into by Conforto in the 6th on a Texas League two run double by Aguilar that looked like it was straight out of the spring training scene from Major League.

Jeff was shaken up on the play but stayed in the game, but would later be pinch hit for by Javy Báez. Earlier in the game, Gary Cohen eloquently opined on all of the aspects of the entire situation:

Gare on the Mets battling the media and the fans. pic.twitter.com/OnZ2qAVnW7

Then when Báez strode up to the plate, the reaction was about what you thought it would be:

Here is how Citi Field greeted Javier Báez in his first plate appearance of the day. pic.twitter.com/O362RNV4GL

Báez was hit by the pitch, which strangely seemed to turn the crowd in his favor. Maybe they were wishing he was hit a little harder. Who knows. But perhaps it was the start of the close of the circle.

The Mets were dead in the water headed to the 9th down 5-1, and Brandon Drury struck out the start the inning. Anyone who has watched the Mets all season was resigned to the fact that this game was cooked, even if we were technically sent back to April 11th when the Mets were still 3-3, Báez was a Cub, Starling Marte was the Marlins’ center fielder, milk was still selling at $16.15 per hundredweight, Eddie George had just signed to be the head coach at East Tennessee State, and pre-game apologies weren’t necessary. All Mets fans could do at this point was pretend that August never happened, because in the world of baseball, it actually hadn’t.

People will forget that Chance Sisco started all of this with a walk. Poor Chance, by next February people might forget that he was ever on the team. But the rest of the club made sure that Sisco’s walk would not die in vain. Brandon Nimmo lifted a 2-0 pitch through the humidity and out to cut the Marlins’ lead to 5-3 and knock Anthony Bass out of the game. Dylan Floro came in and got Francisco Lindor to fly out right center to leave the Mets with one out to play with. Dom Smith hit an inside out single to third base, and Pete Alonso doubled to put runners on second and third for Báez. 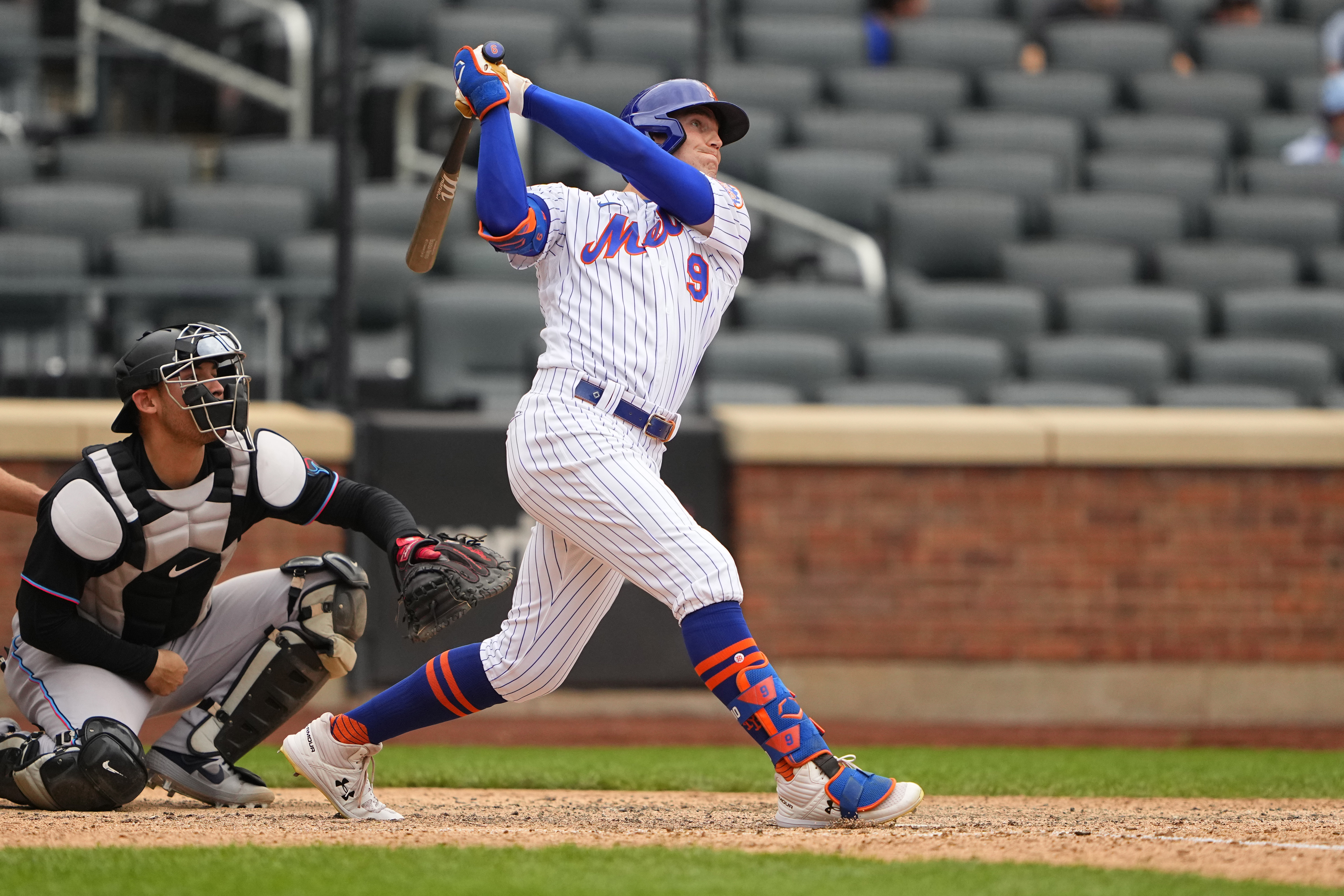 The fans, perhaps understanding the situation while at the same time realizing that in the pantheon of LOL Mets moments that giving a thumbs down is nowhere near the pinnacle of controversies which include but are not exclusive to: getting arrested at Cooter’s, throwing firecrackers at kids, throwing bleach at reporters, running an illegal gambling ring and selling the memorabilia that you’re in charge of, commenting on a pregnant woman’s marital status, texting photos of male anatomy to a reporter, texting a picture of yourself looking like the Village People, or falling victim to a ponzi scheme … and that’s just off the top of my head … started chanting “Ja-vy Ba-ez” as an olive branch and as a polite request. Please do something.

Báez fouled off the high fastball for strike one. Then you saw Alex Jackson set up outside. Uh-oh, here comes the outside slider that Báez is going to flail at for strike two. You saw the break on the ball, and I’m sure you cringed as I did.

Big difference between a 1-1 count and an 0-2 count. And with the pivot coming on a ball that Báez took that he normally swings at was a huge turning point in the game, and we pray in this season. Báez got a much better pitch at 1-1 than he would have seen at 0-2, and grounded it in the hole to drive in Smith to make the game 5-4. Then Conforto, who just one inning earlier was attempting to turn his bat to dust, did this …

You know there were odd circumstances because it took SNY about 3-5 minutes to show a replay of Conforto’s reaction. It was all about Báez, his mad dash to the plate as a catcher playing left field booted Conforto’s single, and his earring which at this time is still lying somewhere near home plate. His day started with an apology, and his afternoon ended with a 6-5 victory that seemed impossible after Drury’s strikeout. Perhaps it also ended with an understanding on both sides that all things can be forgiven and even forgotten when you produce and when you win.

Just think, we get to do this all over again in about a half hour