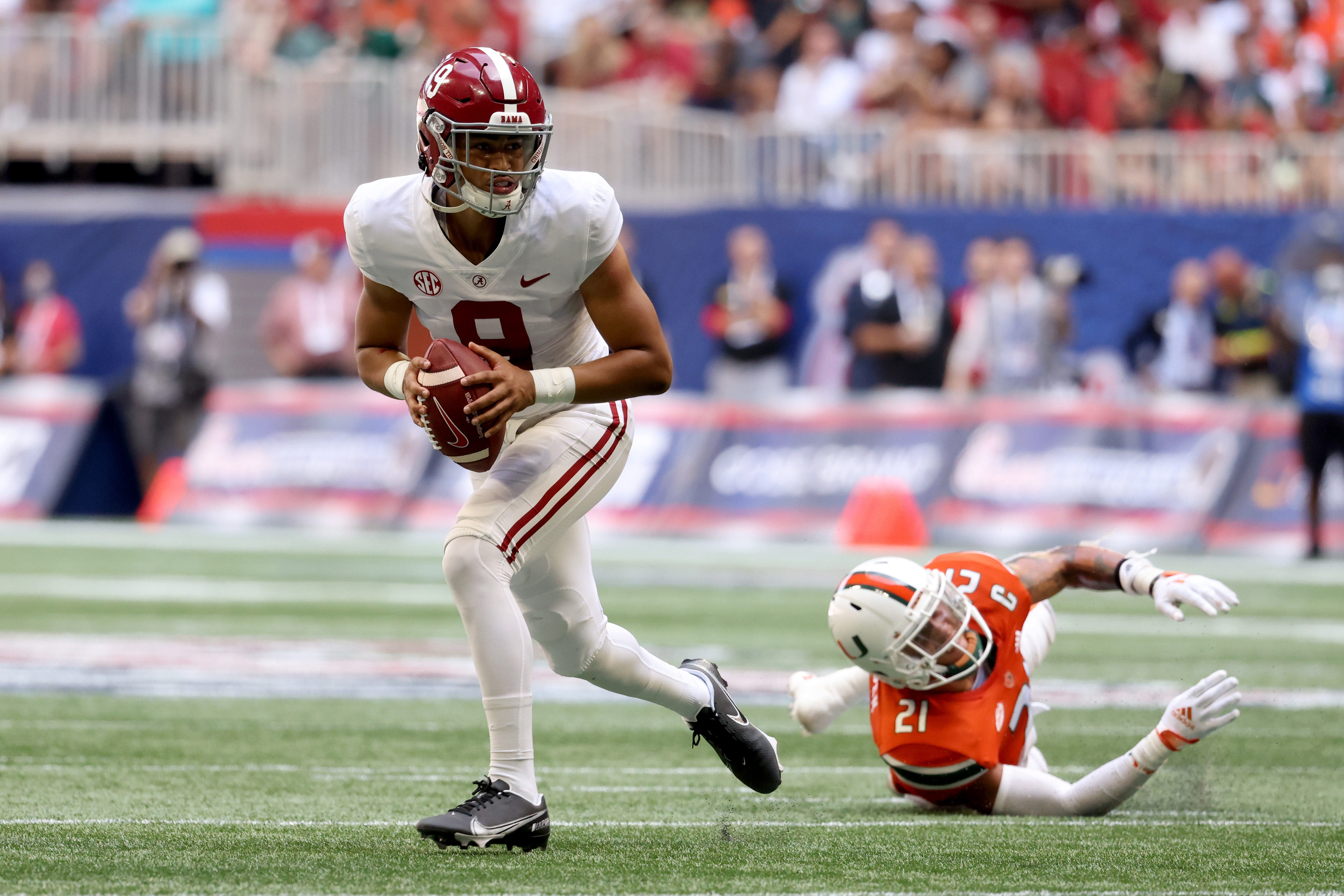 After getting an appetizer of college football games last weekend, we kicked off Week 1 of the regular season Saturday. There were a lot of good games that featured exciting performances across the country.

The action started Friday night with the Virginia Tech Hokies upsetting the No. 10-ranked UNC Tar Heels in Blacksburg, Va. Then, we saw the No. 1-ranked Alabama Crimson Tide dominate the No. 14-ranked Miami Hurricanes 44-13 in Atlanta, Ga.

Crimson Tide quarterback Bryce Young put his stamp on Saturday’s game and could be the next good quarterback to come out of Alabama. We’ll discuss Young’s performance and other notable things from Week 1 in our first of many college football notebooks.

This weekly notebook will focus on some of the big performances from the weekend in college football, players you need to watch as we move towards draft season, and random tidbits of info. With that being said, let’s talk about some quarterbacks, shall we.

Slow starts for Howell, Rattler to begin the regular season

The projected top two quarterbacks in the 2022 NFL Draft did not play their best in their respective regular-season games. UNC quarterback Sam Howell was flustered by Virginia Tech Friday and had 3 interceptions in the team’s 17-10 defeat.

Sam Howell, what are you doin’ ? pic.twitter.com/sWnf67GW2u

The junior quarterback also completed 17-of-32 passes for 208 yards and a touchdown. Howell’s performance was shocking as he only threw seven interceptions last season. He also didn’t receive a ton of help from his offensive line, which looked overmatched by Tech’s defensive line.

But the good news is that Howell and North Carolina can bounce back next week against the Georgia State Panthers. As for Spencer Rattler, his stats were better than Howell’s, but he did not play his best against the Tulane Green Wave.

He completed 30-of-39 passes for 309 yards, 1 touchdown, and 2 interceptions. One of those interceptions came on the Sooners’ first offensive possession of the game.

Tulane quarterback Michael Pratt battled and outplayed Rattler, according to the broadcasters. The Sooners ultimately defeated the Green Wave 40-35 in a game that should not have been close.

You could not tell that sophomore quarterback Bryce Young was making his first collegiate start on Saturday afternoon against Miami. Young torched the Hurricanes’ defense to the tune of an efficient 27-of-38 passing on 344 yards and 4 touchdowns.

The 6-foot quarterback became the first Crimson Tide quarterback to throw four touchdown passes in his first start. Alabama head coach Nick Saban thought his young quarterback did everything he was supposed to on Saturday afternoon.

“I thought Bryce did really, really well,” he said (h/t ESPN). “The poise he played with, the command he had. He kind of took what the defense gave him and really directed the offense in a positive way.”

Young is off to a great start this season and should be one of the more exciting players to watch this season under center.

Speaking of exciting players, Cincinnati senior quarterback Desmond Ridder picked up where he left off on Saturday against Miami (OH). The Redhawks’ defense struggled to contain Ridder, who threw an 81-yard touchdown pass to Tyler Scott on Cincinnati’s second offensive play.

It’s not too late to put down that Ridder Heisman bet. pic.twitter.com/y8XaH9rj7q

The dual-threat signal-caller completed 20-of-25 passes for 295 yards, 4 touchdowns, and an interception. Ridder also picked up 31 rushing yards and a touchdown. For the Bearcats to crash the party and get into the CFP, it will fall on the shoulders of the senior quarterback.

UConn is still in search of their first win

After getting crushed by Fresno State on the road last weekend, the UConn Huskies took on the Holy Cross Crusaders at home on Saturday afternoon.

The Huskies, who have not won a football game since 2019, lost to Holy Cross 38-28. UConn could not stop Crusaders quarterback Matt Sluka, who recorded 123 passing yards, 2 touchdowns, along with 112 rushing yards and a score.

It was Holy Cross’s first win over an FBS opponent since 2002. UConn will try to get into the win column next weekend against Purdue.

We have to give props to the Kansas Jayhawks, who won their first game in two seasons against the South Dakota Coyotes (FCS) on Friday night.

The Jayhawks defeated the Coyotes 17-14, thanks to a fourth-quarter touchdown pass by quarterback Jason Bean.

If that name sounds familiar, he was the starting quarterback at North Texas last season. Bean should bring excitement and stability to the quarterback position, which we haven’t seen since Todd Reesing.