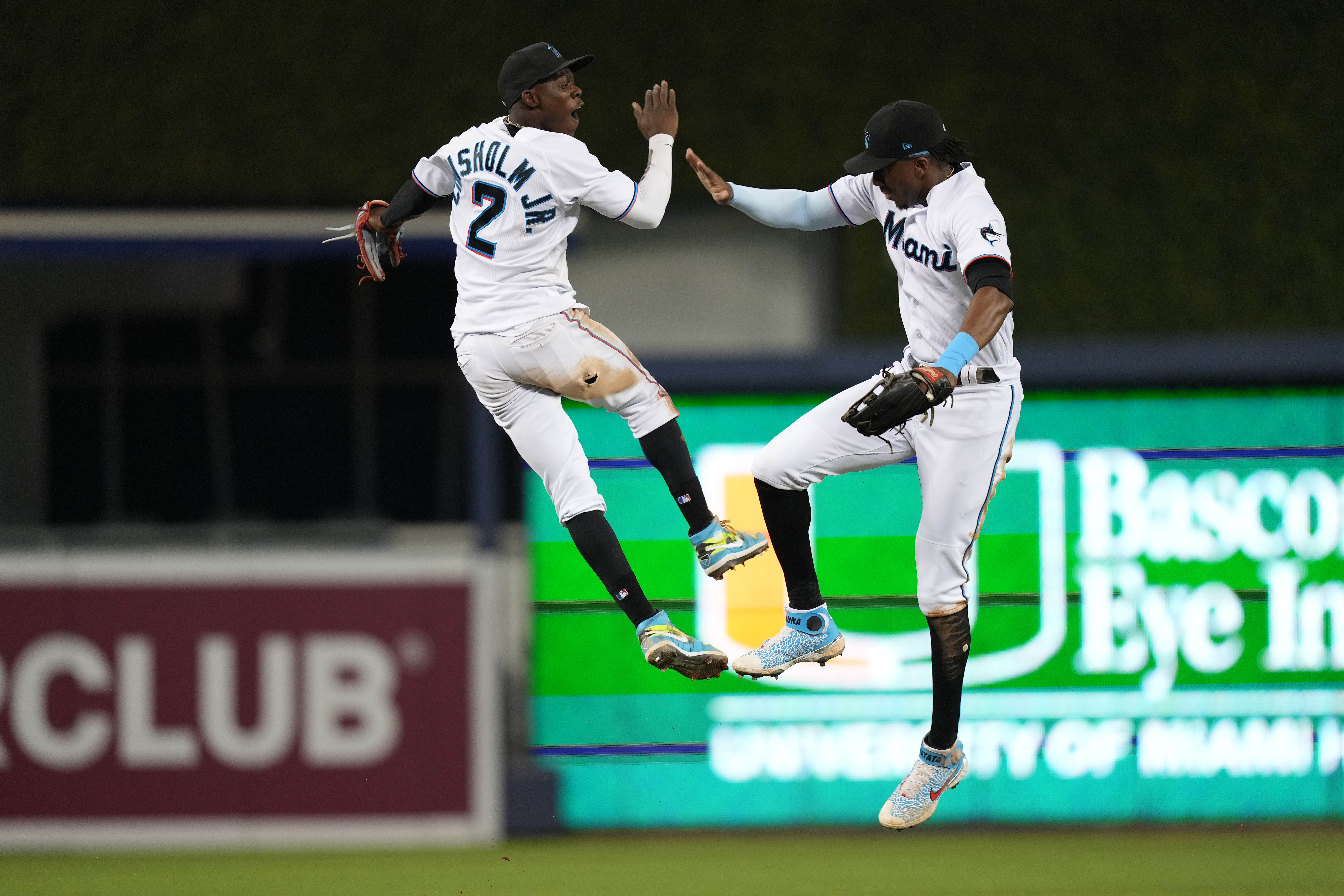 The first part of the season really held such promise. They survived a ton of injuries, we were introduced to the bench mob, Aaron Loup was a revelation. Marcus Stroman was in the midst of his best major league season. Edwin Diaz had long stretches of dominance. On and on and on.

But in the end, and make no mistake … tonight was the end … seemed like an all too familiar storyline. They looked good early. Stroman was hummin, Javy Báez was making things happen on the bases, stealing third base in the first which led directly to the first run as he scored on a wild pitch, and then hitting a missile in the third to make the score 2-0. Things were good.

Then Jake from State Farm showed up. And things did not go surprisingly great.

It started in the top of the 6th as Dom Smith had runners on first and second with a perilous two run lead, and looked at strikes two and three to end the inning. It was then that my sinking feeling started, and things didn’t get any better in the bottom of the inning. Stroman hit Eddy Alvarez and gave up a single to Miguel Rojas which sent the speed skater to third. Alvarez scored on a fielder’s choice to cut the lead to 2-1. Then with one out in the bottom of the 7th, Sandy Leon hit a chopper that landed in front of Stroman but spun behind him, and Leon reached first.

Smart Water then pulled Stroman from the game in favor of Brad Hand. When he was acquired, I knew that the final demise of the 2021 version of the Mets would involve Brad Hand. I believe it was foretold in the sea scrolls. After a wacky play in which Hand threw a wild pitch (and not just in the technical sense, I mean it was freaking wild) and James McCann threw out pinch runner and slightly faster catcher Alex Jackson at third on the carom, Hand fielded a dribbler and foolishly attempted to throw out Lewis Brinson at first. Instead, he threw it to Key West and Isan Diaz scored the tying run. That Brinson was thrown out trying to advance to second on the play was a mere footnote on the road to the inevitable. 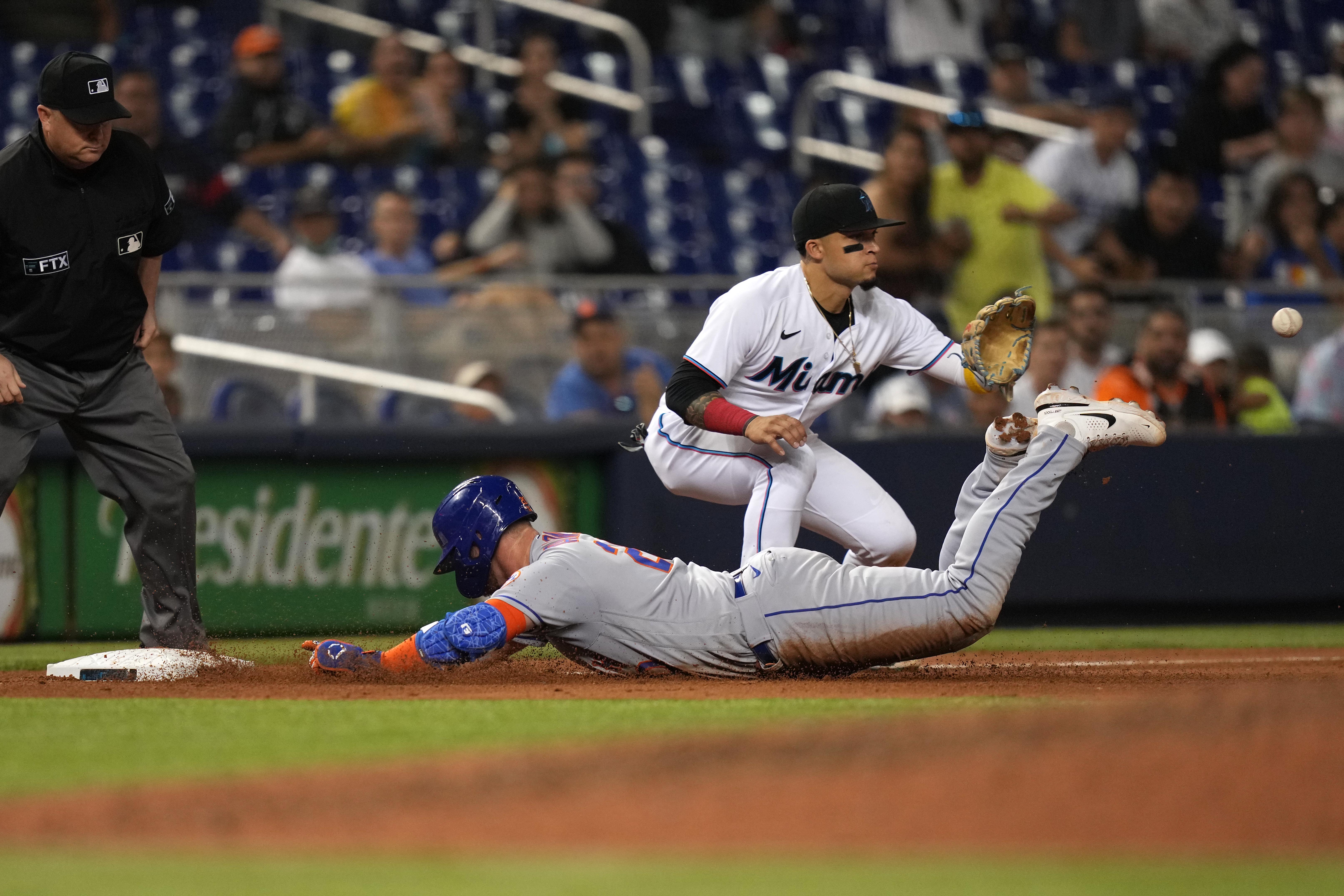 Pete Alonso led off the 8th with his third triple of the year. With all the Mets needing was a fly ball to get Alonso home, and with the right people up to do it: Báez and J.D. Davis, they instead got two meek grounders to the left side. After Michael Conforto was intentionally walked to set up some chess pieces flying, pinch hitter Jeff McNeil grounded out against situational lefty Richard Bleier to end the threat. Once again, you had a feeling that stranding a polar bear at third base would come back to bite them, and it only took three batters. With two outs in the bottom of the 8th, Jazz Chisholm did this:

Running out of things to say about @j_chisholm3 sooooo,,,,,

From the moment the Marlins tied the game in the 7th, and definitely after Chisholm’s go-ahead homer in the 8th, the look of defeat was palpable on the Mets’ faces. If they were always there, then it was just more noticeable tonight due to the directing of SNY’s John DeMarsico. For the first time, this team just looked defeated. They looked resigned to the fact that they blew a four game division lead and that they weren’t getting it back. They also looked like a team that was going to go down without a fight in the 9th, and that’s exactly what happened.

Sometimes I like to invoke the phrase “it never ends.” It can be used for a lot of situations when you just feel like you’ll never be able to wade through the monotony of life. I feel that way tonight. The disappointing endings? The ones where I’m resigned to the fact that I don’t have to set aside money for playoff tickets and rearrange my schedule in October around the baseball playoffs? That never ends. This season has the added knife twist of being in a division that was lovingly mediocre. And while there’s a lot of social media talk tonight about what the Mets need to do or who they need to fire or trade or release, I’m too busy wallowing about why this October is going to be like every other October. Monotonous. Wistful. Melancholy. Wonderment … of why it’s always the freakin’ Marlins.

It never ends … every year.