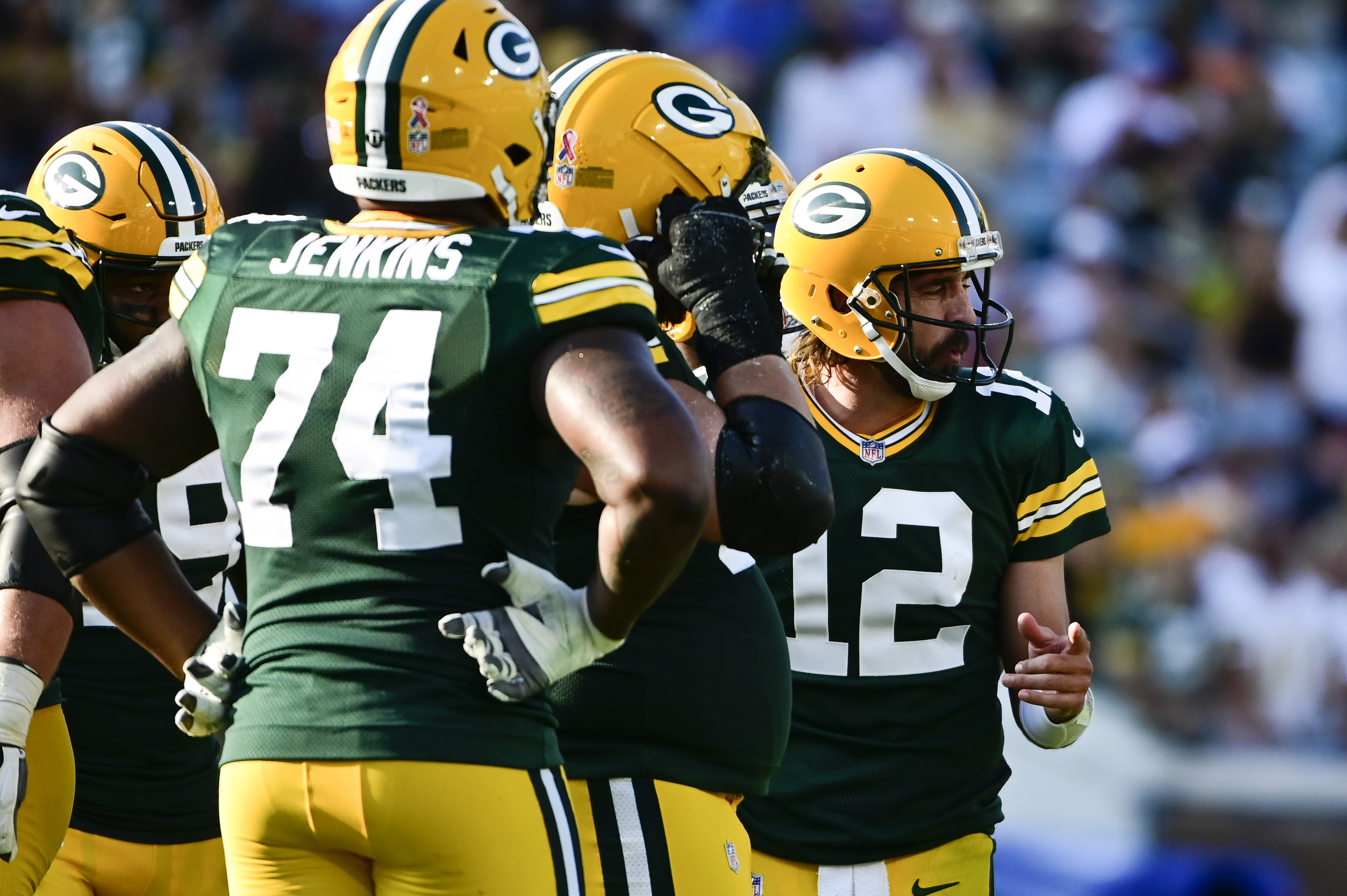 The Green Bay Packers opened the 2021 NFL season in embarrassing fashion with a 38-3 loss to the New Orleans Saints in Jacksonville, Florida.

The Packers were thoroughly outplayed in all three phases of the game and the outcome was never in doubt. It was a very disappointing way to start a season that is full of high expectations after an offseason full of controversy and turmoil.

Here is a look at 10 things we learned from the Packers 38-3 loss to the Saints:

The biggest concern the Packers offense had entering the game was how their revamped offensive line would perform. Unfortunately, the answer was not very well.

Aaron Rodgers was sacked twice but pressured throughout the game. The Saints totaled seven quarterback hits on Rodgers and forced him out of his comfort zone all afternoon.

The offensive line was not effective blocking for the run, either as the Pack averaged 2.9-yards per rush. Starting two rookies and moving Elgton Jenkins to left tackle did seem to cause a significant drop off in the offensive line’s performance and it showed throughout the game.

The Saints ran the ball against the Packers. That strategy was hardly a surprise as running the ball kept Rodgers off the field and kept the chains moving for the Saints.

By the end of the game, the Packers had allowed 171 yards on the ground and New Orleans averaged 4.4-yard per rushing attempt. The Saints held the ball for 34:36 in this game compared to just 25:24 for the Packers.

Alvin Kamara led the way with 83 yards on 20 carries but backup Tony Jones, Jr., was also extremely effective and averaged 4.5-yards per carry on his 11 attempts. When needed, quarterback Jameis Winston was effective running the ball, gaining 37 yards on six scrambles including some key first downs.

The change in defensive coordinators from Mike Pettine to Joe Barry did not seem to help the Packers run defense in Week 1.

It seems the Packers have a game or two each year when they just play sloppy football and don’t look ready to play. This was clearly one of those games.

From the beginning, the team looked out of sync and not ready mentally or physically. Sean Payton also outcoached Matt LaFleur as the Saints executed their game plan effectively while nothing the Packers tried seemed to work consistently at all.

The new defensive system relies less on blitzes and more on pressure from four pass rushers. Against the Saints, the Packers got almost no pressure on the opposing quarterback at all. Green Bay did not record a sack in this game and Winston was pressured on just four of his 20 drop backs in this game.

Rashan Gary had two quarterback hits and Preston Smith was credited with one, but that was about it. Winston had time to throw the football and he picked the defense apart, completing 14-of-20 passes for 148 yards. He threw five touchdown passes and did not throw an interception.

Overall, the Packers were unable to get any consistent pressure on the quarterback. When you can’t stop the run and can’t pressure the opposing passer, you won’t win too many football games.

The Packers were extremely confident Aaron Rodgers would be ready to play against the Saints despite not appearing in any preseason games at all. It wasn’t even close to the case.

Rodgers looked “off” and he was not sharp. He finished the game by completing just 15-of-28 passes for 133 yards and two interceptions.

The pressure from the Saints defense and the lack of a running game didn’t help, but Rodgers didn’t provide the offense with any spark or consistency except for a desperation drive just before the half that led to Green Bay’s only points of the day.

Falling behind quickly didn’t help, but the Packers abandoned the running game too quickly in this game and never established it at all. As a team, the Pack attempted 15 runs and five of them were by rookie Kylin Hill after the game was already out of reach.

A.J. Dillon was effective, gaining 19 yards on just four carries, but the Packers didn’t give him the ball much. Aaron Jones was stopped early and gained just nine yards on five attempts with a long gain of three yards on the day.

The lack of a running game allowed the Saints defense to concentrate on pressuring Rodgers which they did quite effectively throughout the game.

Jordan Love got his first taste of regular season NFL action when he played the final 10 minutes of the game. He finished the day by completing 5-of-7 passes for 68 yards for a quarterback rating of 102.1.

There were some good signs to be sure including a pretty, 32-yard pass to Randall Cobb that was the Packers biggest gain of the game. He also found Amari Rodgers for a 19-yard pickup and was able to go through his progressions and find secondary receivers.

On the downside, Love fumbled the ball at the Saints five-yard line, something that happened too often in the preseason and cannot become a habit for the young signal caller.

Overall, anything Love did in this game happened in garbage time and should be taken with a grain of salt, but there were some encouraging signs.

Under Mike Pettine, the Packers defense was bend but don’t break and placed an emphasis on forcing opponents to go on long drives and not make mistakes to score points. Well, in Week 1 against the Saints, New Orleans went on several long drives including back-to-back 15-play marches that both resulted in touchdowns in the first half.

In fact, the Saints scored on six of their first seven possessions in this game. By the time the Packers defense stopped New Orleans, the game was already out of reach.

The defense also forced no turnovers and just seemed passive and ineffective throughout the game.

We expected some growing pains because the team is playing a new defensive system under Barry and hopefully things will get better over time, but this was hardly an encouraging start for the 2021 Green Bay defense and adjustments will have to be made.

The Packers did force one turnover in the game although it didn’t count. In the third quarter, Darnell Savage intercepted a pass by Winston deep in Green Bay territory and returned it 31 yards to the Green Bay 37. Unfortunately, the play was called back because Za’Darius Smith was called for roughing the passer.

The call was a questionable one at best. It clearly was not a late hit and there was no contact with the head or any other body part that the league tries to ban. It looked like a hard, clean hit just a half second after Winston released the ball.

The Packers were already trailing 24-3 at the time and the drive ended in a touchdown for the Saints which made it 31-3. The way the Packers were playing, the penalty wouldn’t have changed the ultimate outcome, but it was a bad call and it snuffed out whatever remote chance the Packers had of mounting a comeback in this game.

The Packers must realize that as poorly as they played in all facets of this game, they are just 0-1 and this was just one of 17 games on the schedule this season. It’s far too soon to panic or write off the season.

The other three teams in the NFC North also lost, so the Pack is still technically tied for first place. How they respond to this abysmal performance will be a key to the season. This was just one game, but the Packers need to make this an isolated incident or the Pack’s last dance will be over before it begins.