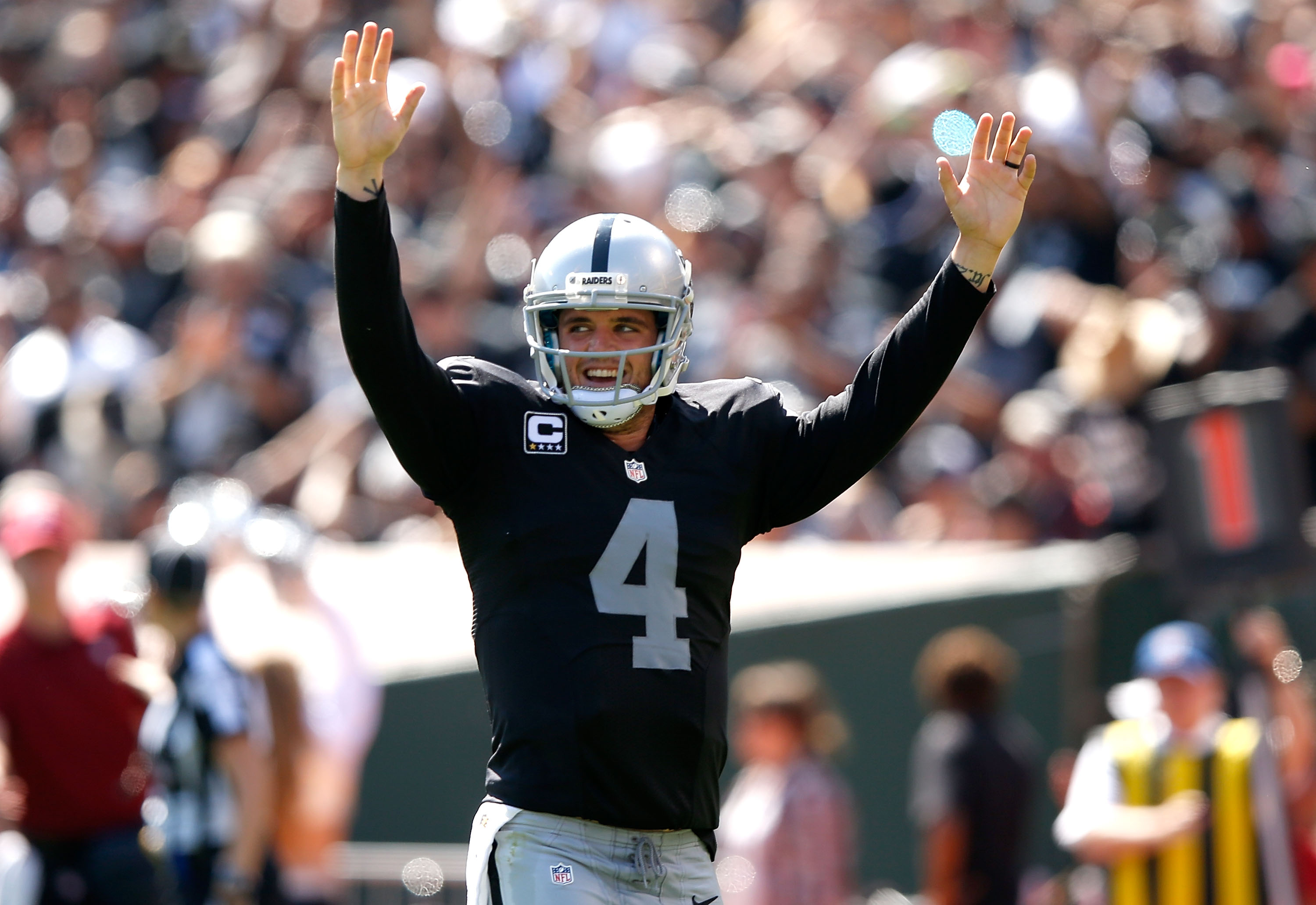 You can run from key preseason injuries, activity-limiting illness and a porous offensive line, but you can’t hide.  The Ravens looked disjointed in most phases of their offense and defense, yet still had a chance to put away the Raiders, even getting a lucky break near the end of overtime. But the attempted heroics of Lamar Jackson resulted in two big turnovers and the Raiders ultimately cashed in on both.

Derek Carr threw a 31-yard TD pass to Zay Jones after the Raiders squandered their first possession of overtime, beating the Baltimore Ravens 33-27 on Monday night in the team’s first game with fans in Las Vegas.

Carr’s second TD pass of the game came after Carl Nassib‘s strip sack of Lamar Jackson at the Ravens 27. Nassib made big news this offseason when he became the first active NFL player to come out as gay.

The Raiders had thrown an interception after driving to the 1 on the opening possession of overtime and made another blunder with a delay of game before a field goal try.

Coach Jon Gruden then sent the offense back on the field and Carr hit Jones on the next play for the game-winner.

The Raiders trailed 14-0 early, ending a 98-game, regular-season win streak for the Ravens when leading by at least 14 points dating to 2004.

The loss capped a rough stretch for the Ravens, who have had a run of injuries that sidelined top three running backs J.K. Dobbins, Gus Edwards and Justice Hill, as well as cornerback Marcus Peters, for the season.

They had won the past five openers by a margin of 177-26, but came up short in this nail-biter thanks to a strong game from Carr, who threw for 435 yards.

The overtime came after a wild back-and-forth fourth quarter that featured the Raiders rallying to tie the game on three separate occasions, with Carr driving Las Vegas to a tying 55-yard field goal in the final 37 seconds.

The Ravens had taken the lead when Jackson scrambled 28 yards to help set up Justin Tucker‘s 47-yard field goal.

The Raiders earlier got a forced fumble by Quinton Jefferson against Jackson to set up Josh Jacobs‘ 15-yard TD run, tying the game at 17. The Ravens answered when former Raider Latavius Murray ran it in from 8 yards one play after Jackson found Sammy Watkins on a mismatch for a 49-yard pass.

Carr then connected on a 37-yard pass to Henry Ruggs III that set up a tying 10-yard TD to Darren Waller with 3:44 to play.

Jackson’s TD pass to Marquise Brown in the first half was a spectacular individual effort. He escaped pressure from Maxx Crosby and Yannick Ngakoue and scrambled before finding Brown in the back of the end zone for a 10-yard score.

According to NFL NextGen stats, Jackson took 7.84 seconds to throw for the fifth longest on a TD pass in the past five seasons and scrambled 27 yards for his most ever on a TD.

The Ravens went for it twice on fourth down in the first half, getting a 35-yard TD run from Ty’Son Williams on one of the first. Murray got stuffed by K.J. Wright on the second.

The Raiders got stopped on a fourth-and-1 run by Jacobs at the Ravens 13 in the third quarter.

The Raiders got off to a sluggish start offensively after sitting most of their starters in the preseason. A holding penalty and botched snap spoiled a promising first drive that reached the Ravens 21 before going backwards and ending in a punt.

They found a groove late in the half with a 75-yard drive capped by Jacobs’ 2-yard run and then getting a 34-yard field goal from Daniel Carlson to make it 14-10 at the break.

Ravens: G Tyre Phillips was taken off the field on a cart late in the first half after injuring his leg and didn’t return.

Jamison Hensley’s reaction at ESPN was mostly about the inept protection and schematic execution provided by the Baltimore offense:

“In the end, the pressure got to Lamar Jackson and the Baltimore Ravens.

“Jackson’s second fumble of the game set up the Las Vegas Raiders‘ winning score in overtime during a 33-27 season-opening loss.

“On third-and-7, Jackson got hit from his right side and coughed up the ball. That led to Derek Carr‘s winning 31-yard touchdown pass to Zay Jones.

“The Ravens struggled to protect Jackson all game, especially offensive tackles Ronnie Stanley and Alejandro Villanueva. Jackson was buying time with his scrambling, but he lost the ball twice trying to extend drives.”

Jackson has now fumbled 33 times in his career.

Describe the game in two words: Very unusual. The Ravens lost after jumping out to a 14-point lead. How unusual is that? Ravens coach John Harbaugh was 81-0 in the regular season when holding a 14-point lead. The last time Baltimore lost a regular-season game with a 14-point lead was in 2004 against the Cincinnati Bengals.

Buy on a breakout performance: Running back Ty’Son Williams. In his first start, Williams totaled 94 yards (65 yards rushing, 29 yards receiving) and scored a 35-yard touchdown. He went from Baltimore’s No. 3 back to atop the depth chart because of season-ending injuries to J.K. Dobbins (knee) and Gus Edwards (knee) over the past two weeks. But Williams’ failure to pick up the blitz proved costly on Baltimore’s final offensive play.