As my buddy Bam Bam and I pulled up to Fed Ex field last Sunday, I tried to explain my position on this year’s Chargers:

“At this point, as long as they don’t beat themselves in all the usual ways I’ll be able to accept it.” 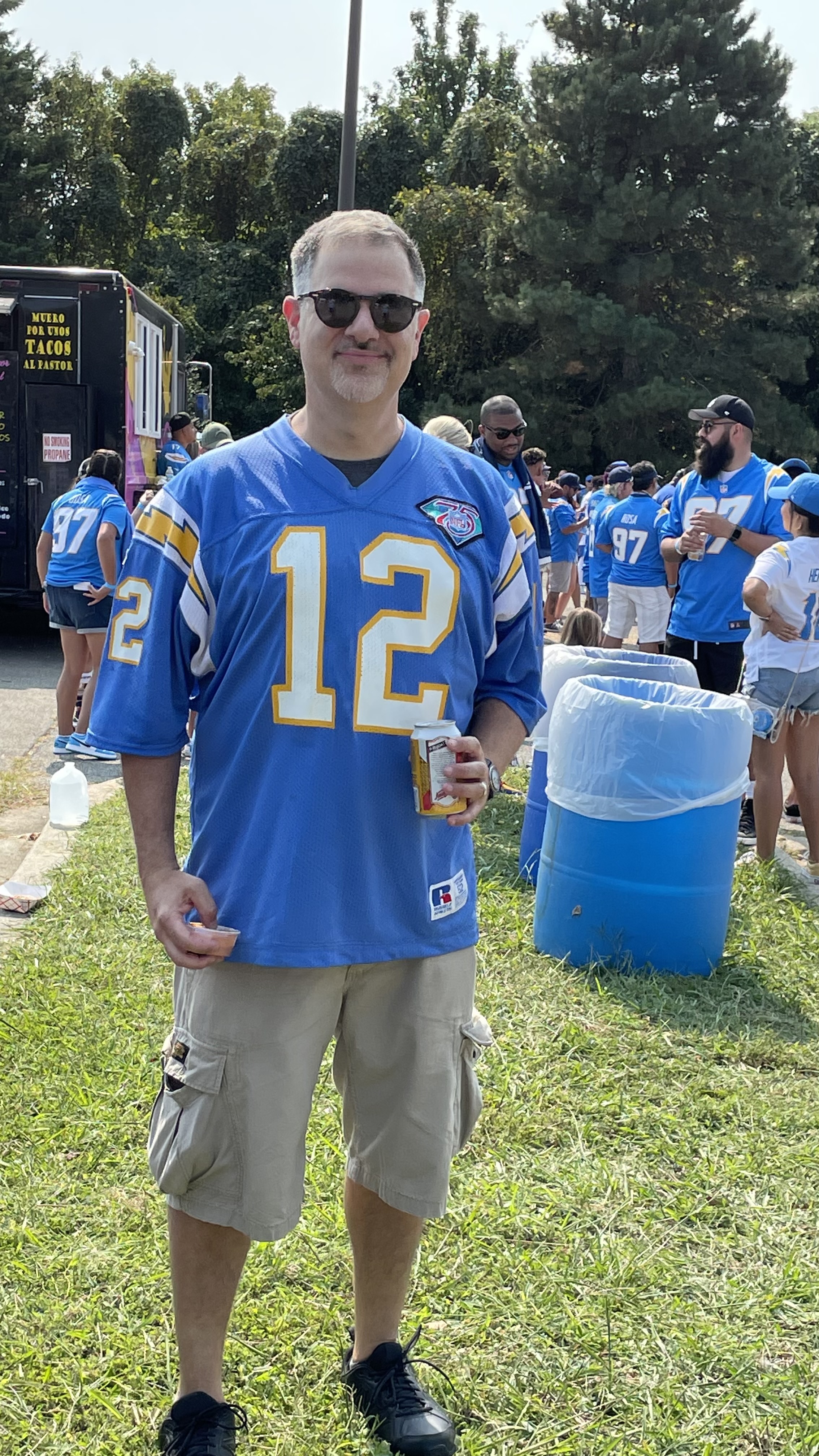 I barely got to talk to many Chargers fans because I was clearly so starved for the ability to do so that I spent about 30 minutes each with the first five I saw.  As you may have seen on TV, FAITHFUL READER, there were tons in attendance.  I know since the move to LA, fans “taking over the stadium” has been big topic on social media.  If you go to the games, it’s really the only sign your attendance has any impact on the game itself.  Sadly, I know my being at the game has no bearing on how the team plays.  But I am always amazed at how many Boltheads there are out there.  Especially when you factor in how much heartbreak we have suffered and how much we’ve all been told we don’t exist, it’s amazing.  For the eight millionth time, these things were all true when the team was in San Diego, however they are really exacerbated now.  Yes, I was the only one in a Stan Humphries jersey.  There were a bunch of fans who were “on the bus” back then, even if they weren’t in Pittsburgh or Miami in 1995.  I am sure there are tons of fans who joined up more recently.  If the team starts to really contend, there will be even more.  I think it’s great.  At age 50, I think I am done proving how long or how intensely I root for this team.  Everyone who shows up or tunes in wants the same thing, a Super Bowl title. 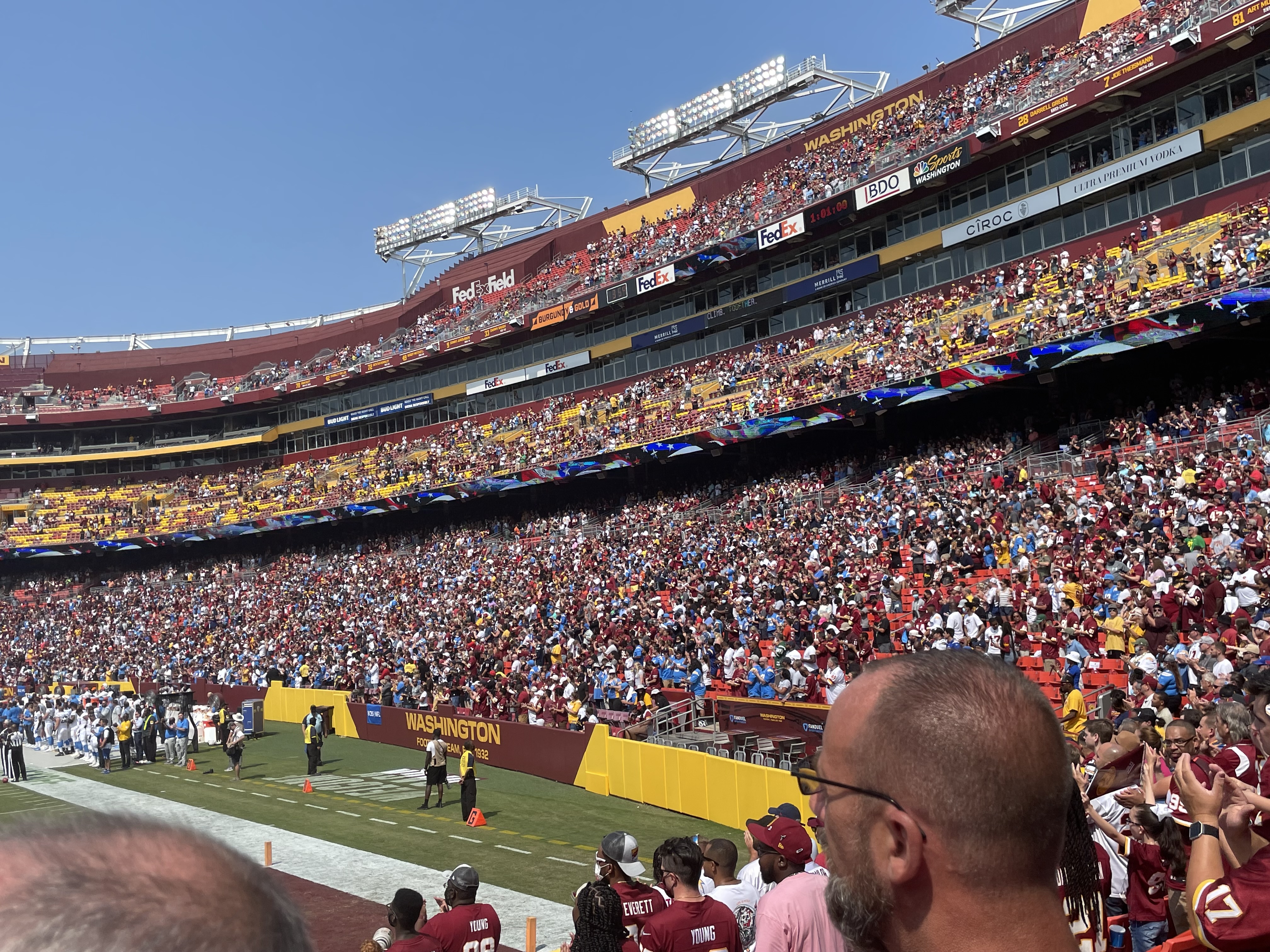 I don’t know if this picture really emphasizes it, but there were a lot of Charger fans in the stands and particularly in the end zone I sat in.  I have to give a huge shout out to “Swooping D” and the tailgate crew.  They’ve been at since the first game after the move.  If I wasn’t driving home to Long Island after the game I am sure I would have put a much bigger dent in the extra beers you guys had.  But it’s actually better that I didn’t for a lot of reasons.  For one, I don’t know if I would have been able to keep my positivity up for 4 quarters.  Obviously, the team looked as good as possible on that first drive.  Even though they fell behind, Herbert was fantastic throughout.  I don’t want to jinx him, but the better he plays the more hype he’ll get anyway.  It was amazing how much trust Staley and Lombardi put in him against a top defense on the road.  Remember when critics suggested that he’d be rusty since he didn’t play a snap in August?

Herbert didn’t throw long much, but that was clearly the plan.  He was fucking surgical all day.  There were more than a few drops, including ones by Keenan and Mike Williams.  But when we had to have completions, both guys came up huge.  The biggest knock on the Chargers is of course their inability to perform in the clutch.  Staley has spent all summer trying to prep these guys for those big moments by stressing preparation and giving their bodies rest when needed.  It worked perfectly last Sunday.

Slater was the big story, as he should be.  Watching the game from the stands all you could see is that Herbert had time to throw.  Chase Young wasn’t disrupting things in the pocket.  Slater was the reason.  Bulaga, who will be on IR for at least 3 weeks, wasn’t on the field very long.  I don’t think Telesco or Staley was counting on Bulaga to be healthy.  How could they?  He was treated as gingerly as possible and he still only made it through one half.  Storm Norton did a pretty decent job and I have to believe that the team is truly comfortable with him in there.  Schofield was brought back today.  He was with Carolina last year, so it’s not as if the Chargers are the only ones stupid enough to sign him.  Then again, the Panthers did sign Trent Scott.  Of course, we all think Indy has the best line in football and they signed Sam Fucking Tevi before he went out for the year.  Sorry, I clearly write these things before I decide where I want the conversation to go.

My point before I meandered is that the line looked great. Besides the pass protection, there were running lanes available.  It also helped that the playcalling wasn’t so predictable that we handed off on obvious running situations.  Between plays to Ekeler, Nabers, and the sneak to Herbert, it seemed like the Chargers were consciously not putting themselves in situations where negative yardage was likely.  The biggest surprise was the contributions of Jared Cook.  It wasn’t just the catches, or how open he was, but it was clutch nature of the receptions.  He came up huge when it was needed most.

There were some missteps, obviously.  In his miked up footage, Chris Harris (also out this week), is shown trying to warn the rest of the defense about the mobility of  incoming QB after Fitzpatrick’s injury.  In the past, a new QB would beat the Chargers without question.  He may very well be their starter (or should have been the starter to begin with), but that’s not the point.  The Chargers stumbled, but it didn’t seem like it was due to typical passivity or stupidity. 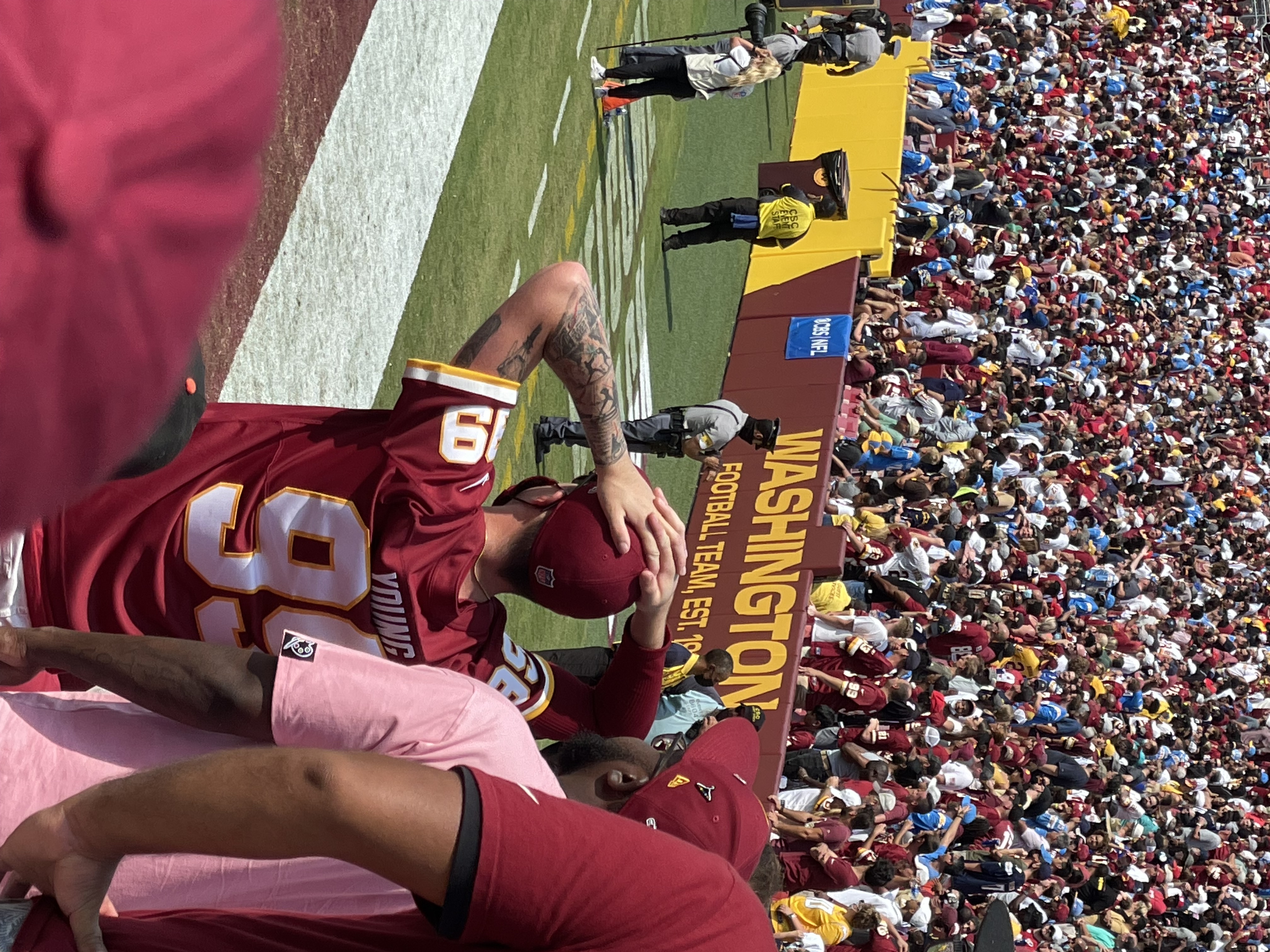 Neither of our field goals were particularly long, but they were good.  Viz will be needed to knock those 50-yarders in soon enough.  As the game wore on, he started reaching the end zone regularly.  It was a sight to behold.

There were some extremely shady calls against us.  Bosa’s second penalty seemed especially iffy.  I guess the rule technically states that you can’t hit the quarterback below the waist, but I can’t fault Bosa for anything in that play.  The “fumble” was the worst.  At the game, there wasn’t a person in the stadium that expected it to be called a fumble.  Obviously, the players didn’t either since not a single one moved towards the ball as if it was live.  It was reminiscent of the call against him in the Panther game last year, but worse.  His arm was clearly moving forward, which helped account for the fact that the ball traveled 20 fucking yards.  But what was most impressive was that the team, especially Herbert, wasn’t derailed by it.

The interception in the red zone was a typical Charger mistake, but it wasn’t of the old “chuck and suck” variety.  I don’t know if it was a miscommunication, but the guy made a play on it.  I wasn’t psyched about it, but Herbert came right undeterred.  He wasn’t making stupid throws at all.  The winning touchdown to Williams was particularly impressive not only because it was on a third down, but because Staley had all the receivers lined up to one side and Williams to the other.  These are the kind of plays that usually happen against us.  Williams couldn’t grab the touchdown earlier, but he held onto this one.

But the most impressive drive of all was the one that iced the game.  So many times we’ve seen the team go conservative, only to give the ball right back.  Watching the telecast during the week, I noticed that even Spero Dedes in the booth thought we wouldn’t throw on 3rd and long deep in our own side of the field.  Not with Herbert.  With a second and 1, Ekeler got tackled for a a loss.  We’ve so often seen the Chargers run the ball up the middle, even though everyone on earth is expecting it.  Not with Herbert.  Like Williams, Keenan Allen, made up for an earlier drop in a big way.  Game over. 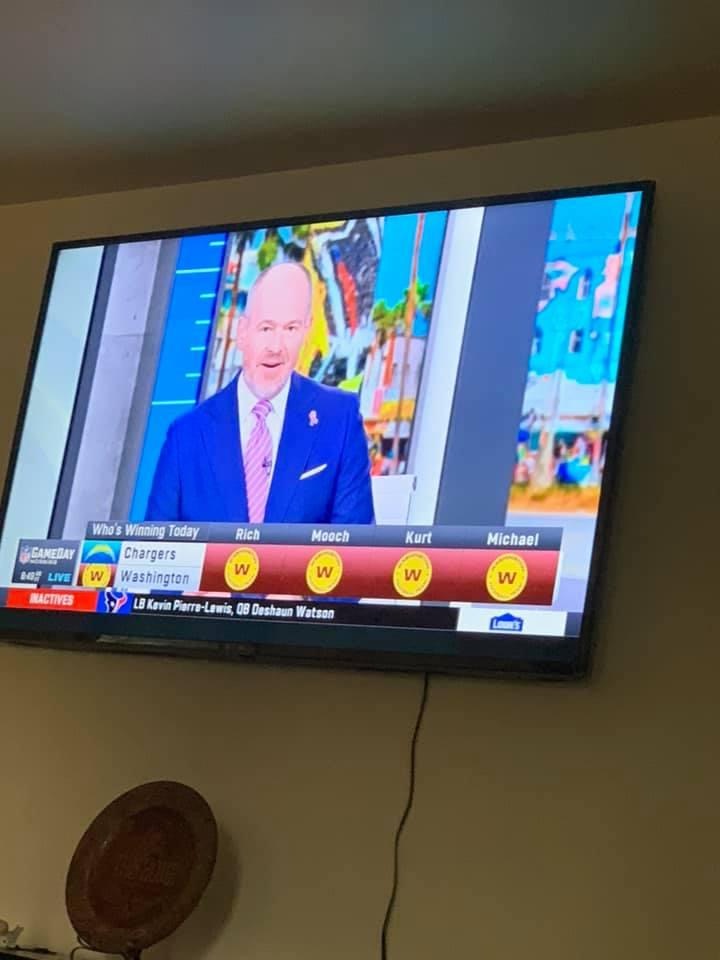 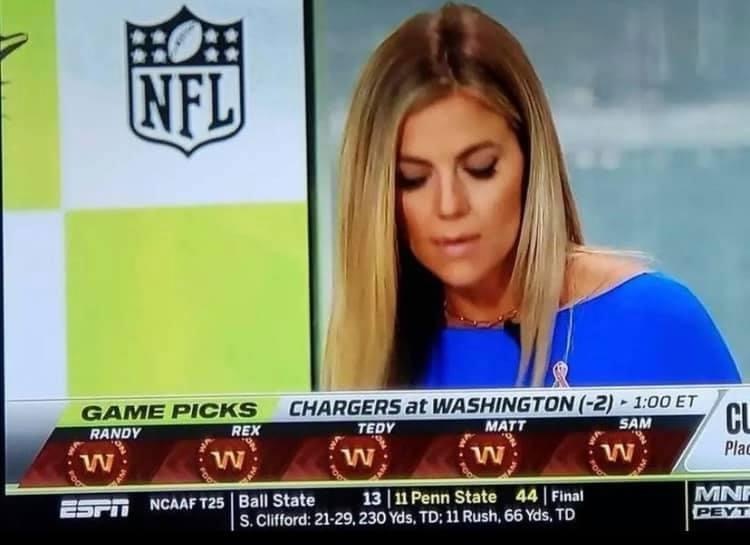 Thanks to the Bolt fam on Twitter for the screen shots.  I can’t blame the “experts” for picking against us.  All we’ve known is this team making the same mistakes over and over again.  But Justin Herbert…

It was like watching Brady or Mahomes drive down the field and you know how much I hate saying that.  But maybe we have a guy who just makes all the difference when it counts.  That isn’t enough to win every week, or guarantee a championship.  But it makes those things possible.  Herbert delivered every time he needed last week and in every spot we are so used to seeing guys not do so.

Now they’ve got Dallas coming in, fresh off a loss at Tampa.  They’ve got guys hurt, for sure.  Their offense looked very good against the Bucs.  I am sure that there will be tons of Cowboy fans at SoFi, just like there were a lot of Boltheads in DC last week.  I also know that it won’t make a fucking difference if we win.  If you watch the post the team Tweeted out today, I think it’s clear the players know they have support.  I hope that the fans are loud, but it’s really only important what happens between the lines.  I don’t remember the crowd being such an issue when we were blowing out the Raiders in 2017 or winning any number of big home games the following season.  It only becomes a story when we lose.  Let’s hope that doesn’t happen.  It’s been a while since this team has come out strong.  They know they are going to Arrowhead the following week, which makes this one even more crucial.  I’ve never suggested that I know what is going to happen each and every Sunday.  But like you, I’ll be watching and hoping it’s something good.