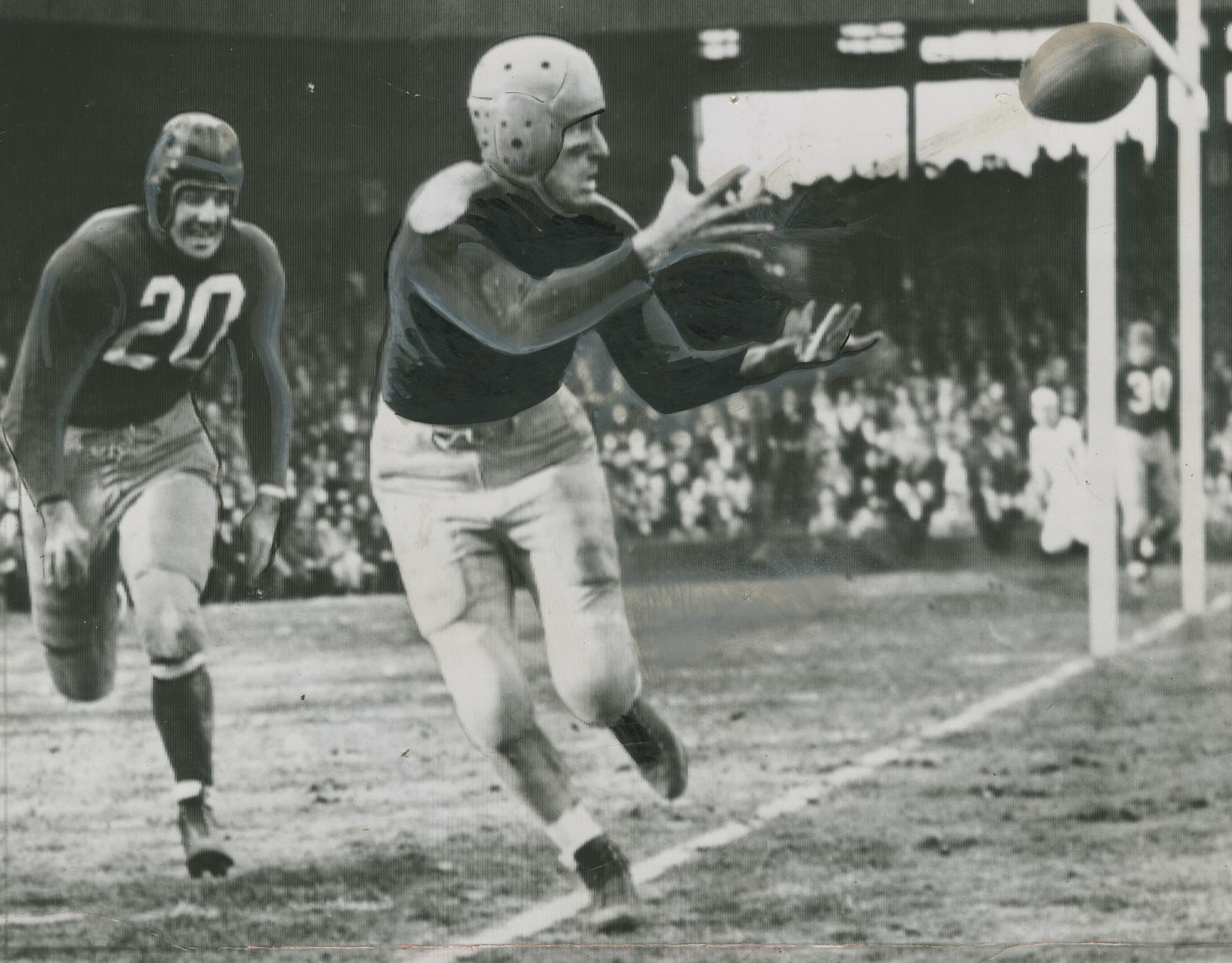 The Green Bay Packers set an NFL record that still stands on October 7, 1945, when they scored 41 points in the second quarter en route to a 57-21 win over the Detroit Lions in Milwaukee.

Hall of Famer Don Hutson also set an NFL record by scoring 29 points in the second quarter on four touchdown catches and five extra points. Had he made the sixth extra point he tried in the quarter, he could have scored an even 30 points in just 15 minutes.

The Lions got on the board first in the second quarter after both teams were held scoreless in the first 15 minutes on an eight-yard run by Chuck Fenenbock, but the lead didn’t last very long. On the first play from scrimmage by the Packers after the ensuing kickoff, halfback Roy McKay found Hutson on a 56-yard scoring pass. Hutson caught the ball at the Detroit 38 and beat three Lions defenders to reach the end zone. The game was tied 7-7.

The Packers just kept scoring throughout the second quarter. Irv Comp found Clyde Goodnight on a 41-yard scoring play to give the Packers a 14-7 lead. Then, McKay found Hutson twice more for scoring plays, one from 46 yards out while the second covered “only” 17 yards. The missed PAT kept the score at 27-7 Packers.

The Packers defense got involved in the scoring on the next Detroit possession. Ted Fritsch intercepted a pass by Detroit’s Cotton Price and returned it 69 yards for a Green Bay touchdown. The Packers now led 34-7 and had scored five unanswered touchdowns.

McKay found Hutson one more time late in the quarter on a six-yard touchdown pass and the Packers led 41-7 at halftime.

In the second half, the Packers scored two more touchdowns, one coming on a 50-yard pass from Lou Brock to Irv Comp and the second on a 33-yard interception return by Charley Brock. Green Bay added a safety in the third quarter to win the game 57-21.

When you look at the final statistics, the Lions seemed to be the dominant team. They had 15 first downs to seven for the Packers and outgained the home team 385 to 293. The Lions gained 141 yards on the ground to only 51 for Green Bay. The big play was the difference as six of the Packers eight touchdowns were scored on plays of 30 yards or more.

The other key factor was turnovers. The Packers intercepted six Detroit passes while the Packers had only one turnover all game long.

Hutson finished the game with six catches for 144 yards and four touchdowns. After the game was over, Lions head coach Gus Dorais summed up the game by simply saying, “Too much Hutson.”

Hutson was typically modest after the game. He told Richard Whittingham, author of the book “What a Game They Played,” that the wind was the reason for the big scoring output by the Packers.

“It all happened because of the wind. I remember vividly how it was blowing straight down the field, like maybe 30 or 35 miles an hour. It was all a matter of judging the ball in the air and we were much better at it that day than the Lions,” Hutson recalled.

“With the wind with us, we’d throw these long passes and I was able to get down there under them,” Hutson continued. “I think their defensive backs didn’t think the ball would travel as far as it did. And sometimes, when we were throwing into the wind, I’d have to circle back like I was going for a lazy fly ball just as I did when I played center field. There was never another game quite like that, at least one that I played in.”

The Packers win improved their record to 2-0 while the Lions dropped to 1-1.

Hutson was in the final season of his 11-year NFL career. The Hall of Famer led the league that season 47 catches in 10 games, the eighth and final time he led the league in catches.

Amazingly, the 41 points the Packers scored in the second quarter remain an NFL record 76 years later. It also remains the most dominant quarter in NFL history after all this time.