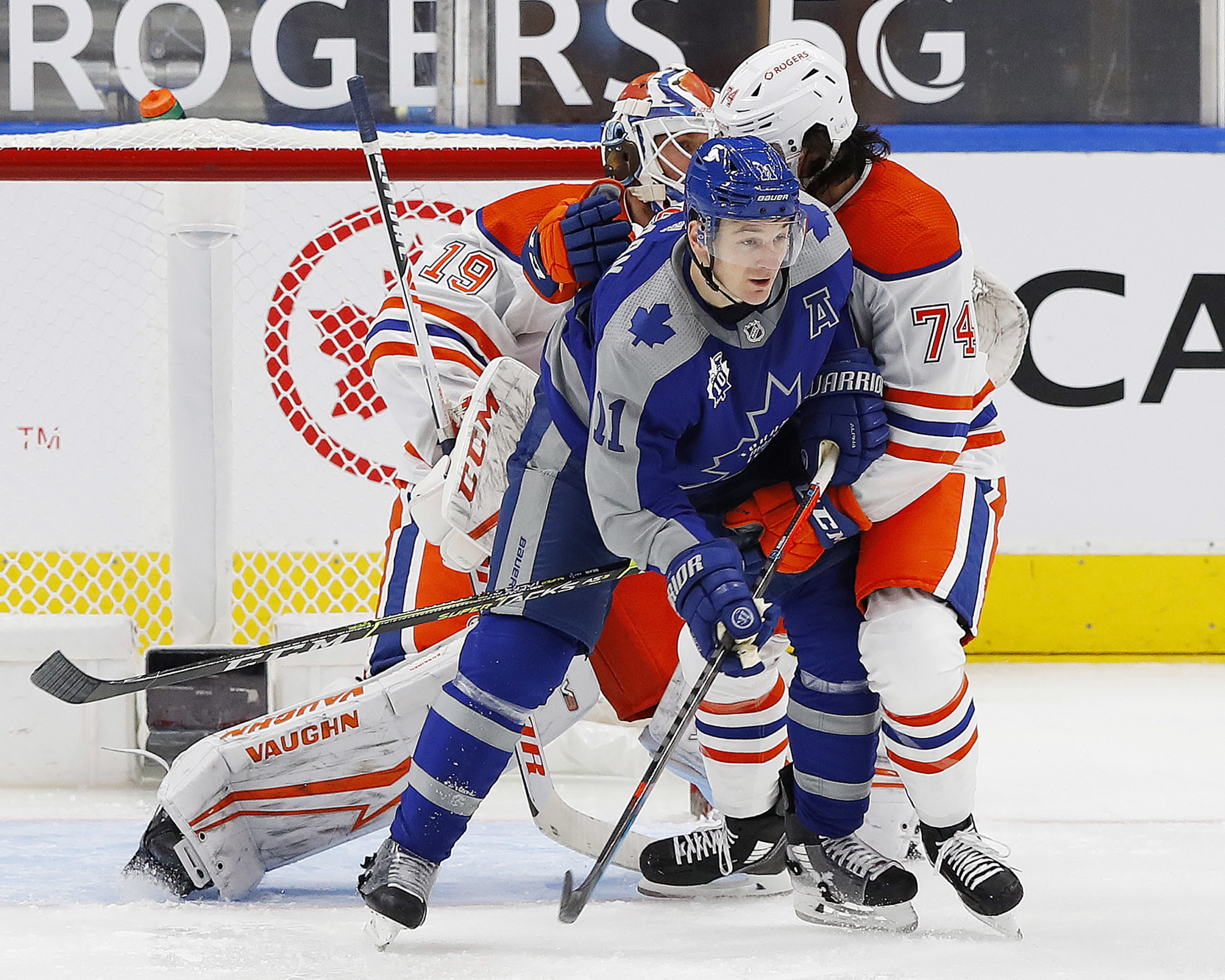 The most lucrative signing of the offseason, Hyman will be looking to avoid the fate of the last winger to sign a long UFA deal to play beside McDavid. There are some concerns regarding some leg injuries he has suffered through recent years but there is plenty of reason for optimism when it comes to his addition to the roster. His game is similar to Gallagher or Marchand in that the foundation of his game is his insatiable intensity. From there he’s been able to add to his game, most notably offensive skills like high level puck handling in tight areas. Regardless of him playing with Matthews, Tavares, McDavid, or Drasaitl it would not be too much to expect him to post career highs in goals and points over the next 3 years or so.

Hyman fills a huge need for a fourth high end forward Tippet can rely on for quality top 6 minutes, and can be trusted in all situations. This solidifies the ability to keep McDavid and Drasaitl separated and takes a lot of pressure off the need for both Puljujarvi and Yamamoto to take steps forward (development is not a straight line). If anything, Hyman’s arrival will help the young duo do exactly that.

In one of the most contested deals across the league this offseason, Keith was acquired at a high cost, both in terms of trade assets and cap space considering how long it’s been since he has been recognized as a strong defender. What Keith does bring to the table is experience and intensity. The rationale is almost certainly that the 3 time champion will strengthen the emotional backbone of the group, which is evidently part of GM Holland’s assessment of what went wrong in the playoff loss to Winnipeg.

Chicago’s poor performances in recent years certainly hasn’t helped Keith look good, but the hope for the Oilers will be for the veteran to have a bounce back season on the 2nd or 3rd pair. Forming chemistry with a defensively minded partner like Ceci or even Russell would go a long way to that effect. A riskier proposition would be to pair Keith with Evan Bouchard and to deploy them as a sheltered offensive pairing.

After stops in Toronto and Pittsburgh in recent years, Ceci has been the subject of more than his fair share of public evaluation. Although many stat metrics disagree on his effectiveness as a defensive player, it’s reasonable to expect him to live up to his role as a 4/5 defenceman over the course of his 3 year deal. He excels a lot of visible aspects of defending, he’s big, skates well, uses his stick to win puck battles in the d zone, has some breakout pass ability, and can play the penalty kill. He should be able to gain the trust of Coach Tippett.

Because the Oilers’ blueline includes the likes of Barrie, Bouchard, and Keith, Ceci’s skillset will be appropriated. In general the timeline of his contract aligns well with when Broberg or Samorukov might be supplanting him on the depth chart. The 4th year on his deal might be a bit more than ideal from the team’s perspective, but as a late 1993 birthday it’s not absurd to think Ceci could be effective until the end of the deal at 32 years of age.

If it were up to me, Ethan Bear might still be starting beside Nurse on the top pair, but I’ve got to move on at some point. The Oilers moved on from Bear, but nonetheless Warren Foegele should be a valued piece of the roster this season. Although he should not be in consideration for a top 6 role (Connor could make it work tbh) he does bring a tenacity that would be appreciated on a checking line.

I do think that establishing a reliable checking line, or at least 3rd line, is paramount to the Oilers’ path forward. If Foegele can replicate the results he’s had alongside Jordan Staal in the past, Edmonton will be in good shape.

In terms of raw numbers, Stalock profiles quite similarly to Koskinen. They are 34 and 33 respectively, and have had their fair share of ups and downs throughout their time in the NHL. Stalock is coming off a strong season in Minnesota, but it is important to keep in mind how defensively strong the Wild were last season. That is to say, if the Oilers play well defensively it’s reasonable to expect the duo of Koskinen and Stalock will be able to provide solid backup play. The 2 of them need to be strong enough to avoid rushing either Konovalov or Skinner into games they aren’t ready for, all the while Stalock should be unheralded enough to clear waivers should that be necessary at some point.

The former 1st round pick had his best season in 16/17 under then Coyotes Coach Tippett, ranking second on the team with 17 goals in a 3rd line role with power play time. Although the last few seasons have been rough for Perlini there is hope that he can rekindle some strong bottom 6 play. With a fully buriable cap hit there isn’t much risk involved, but it wouldn’t be the first time Tippett would be able to get something out of a player that no one else was quite able to (see Smith, Mike). He is big and fast and has a decent shot, and he will be most effective when he’s using those skills to forecheck and backcheck with a plan and when driving the net.

Ryan has been centring bottom 6 lines with strong results since the pre-Brind’Amour coached Hurricanes. He is good at faceoffs and can contribute at both ends, which will help him form chemistry with many different types of linemates. He hasn’t shown many signs of slowing down, meaning he should be able to continue such results this season. Having four strong lines will be crucial should the Oilers wish to contend, especially given their slim margins for error in net and on the back end.