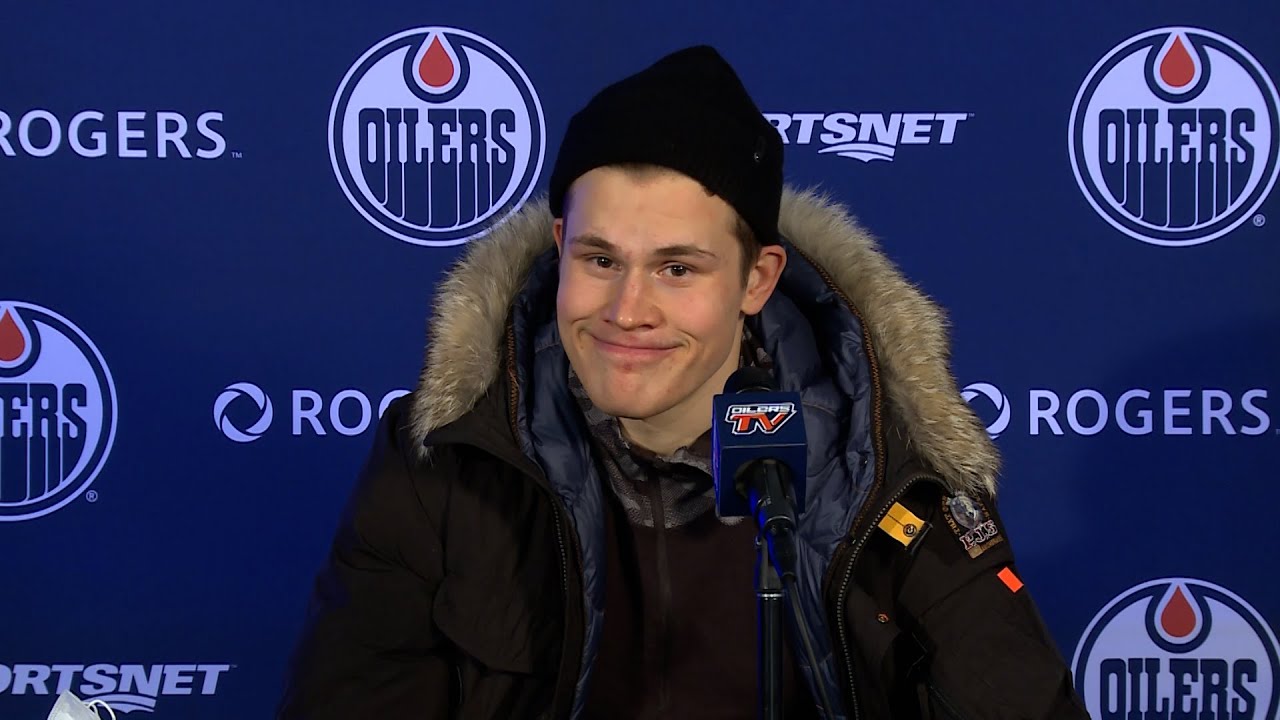 It’s been a journey full of ups and downs for the Finnish winger since being selected 4th overall in 2016, but as it stands now the young forward is poised to have his best season yet in 21/22. Let’s take a look back on how we’ve got to this point and what Puljujarvi brings to the table.

As was too common for the Oilers of the 2010s, Puljujarvi was thrown into NHL action too early, right after being drafted. Even at the time, as a teenager, he had NHL size, could skate well, played a 200ft game, and was a huge part of one of the best World Junior lines of all time (winning gold alongside Aho and Laine). Because of his size, style of play, and experience playing pro in Finland the thought was he would be able to excel in the NHL right away. 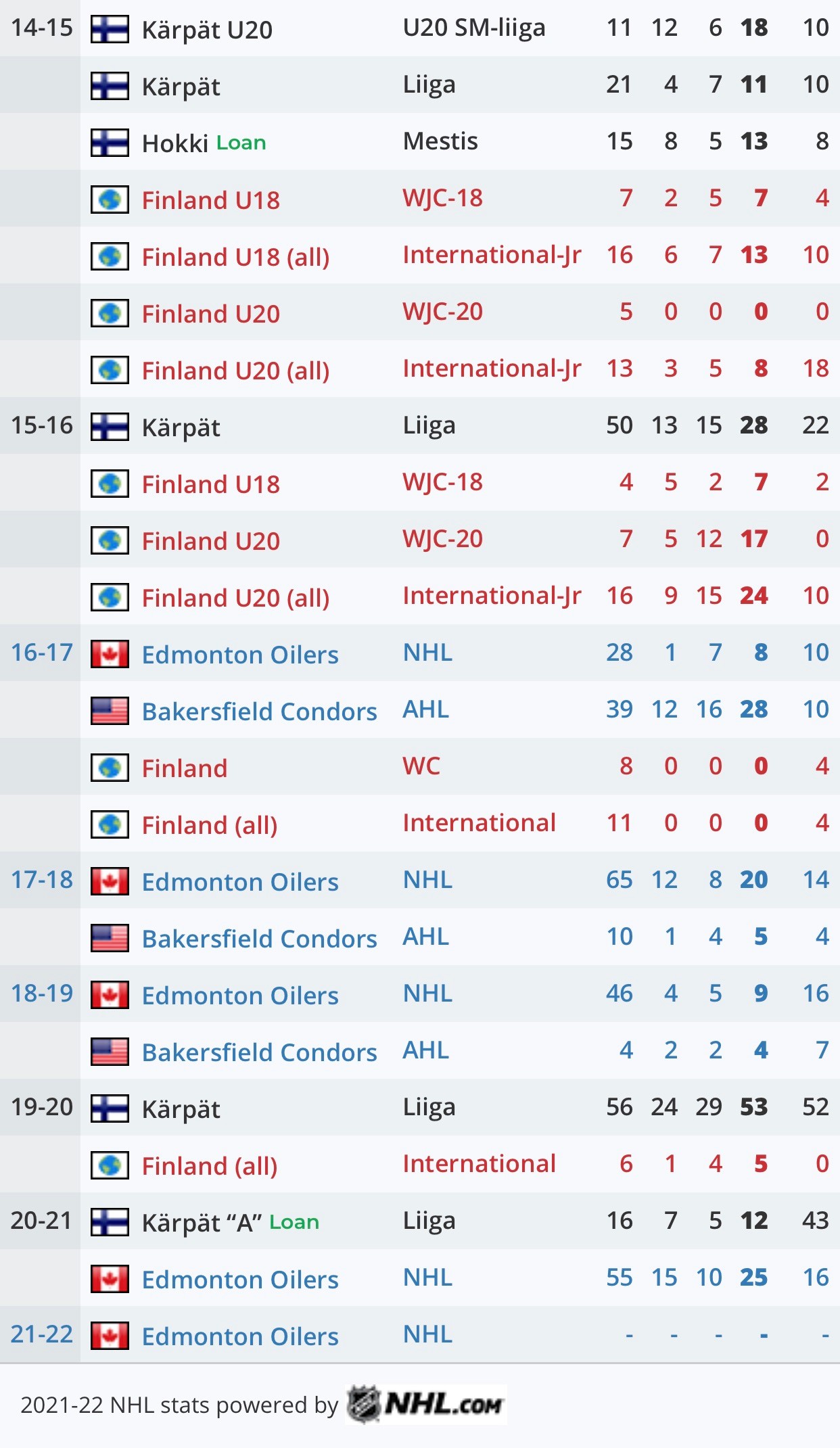 During his initial 28 game stint with the Oilers Puljujarvi underwhelmed next to those lofty expectations, despite posting encouraging underlying numbers when on a line with McDavid, who would go on to win his first MVP that season, taking the Oilers to the 2nd round of the playoffs. Another big bodied forward who was rushed into the NHL, Leon Drasaitl, had a breakout season and was every bit as good as McDavid in the post season. Puljujarvi would end the season in the AHL, posting really good numbers for an underage rookie.

It was the next season, 17/18, where things started to go wrong for both Puljujarvi and the Oilers. Whether it was regression to the mean for Cam Talbot, the defence not playing well enough in front of him, or something else, the Oilers would disappoint and miss the playoffs, plummeting to 6th in the division in 17/18 followed by finishing 7th in the division the next season in 18/19. Puljujarvi would battle injuries and see his production stagnate during this time and would see time in the AHL in both seasons.

This was of course a stressful and disappointing time for everyone in the Edmonton organization. GM Cirelli, Coach McClellan, and goalie Talbot, among others would be moved on from, and this lack of confidence seemed to befall the young Finn as well, who went back to Finland for a year.

Ultimately, GM Holland’s best work was in settling things down upon his arrival in Edmonton. Young players like Nurse and Bear had enough experience to seize the opportunities before them which helped return the franchise to the postseason. Puljujarvi’s game mirrored this positive motion, regaining lost confidence and offensive flair while dominating in Finland. With both team and player free from the toxicity of last place and AHL demotions, the 2 sides were able to salvage a relationship, which brings us to his return last season.

From the start of the season Puljujarvi began playing his way up the lineup, and it wasn’t long before he was able to win back his old job flanking McDavid. Given the pace he was on, his growing confidence, and the Oilers’ talent up front there is every reason to believe he will eclipse 20 goals and 45 points this coming campaign, if not more.

When everything comes together for Jesse it’s a sight to behold, a truly special blend of size and skills. He skates quite well and at his best is able to use his speed to apply defensive pressure and hound the puck. He’s got great hands and agility to make creative moves off the rush as well.

To compare his game stylistically to some great players of yesteryear there are moments where he reminds me of 2 other big skilled wingers, Rick Nash and Marian Hossa. Although he has a long way to go before being considered as good as those 2, I think he would do well to continue to emulate some of the things that helped them excel. Nash was an excellent scorer, winning a Rocket Richard Trophy, and was able to score in more ways than Puljujarvi will be able to, but both can score highlight reel goals off the rush, dangling defenders with a combination of puck control, speed, and strength that few possess. Meanwhile, Marian Hossa was one of the premier 2-way wingers of the early 2000s, who, like Puljujarvi, had more playmaking abilities than Nash, as we see Jesse complete hard crisp seam passes in the offensive zone. What truly made Hossa special was his relentless defensive play, especially on the backcheck through the neutral zone, which is an area that would be really beneficial for Puljujarvi to make strides in.

Perhaps some of the newly signed Zach Hyman’s tenacity in this regard will rub off onto Puljujarvi. Regardless, a line of Hyman/McDavid/Puljujarvi could be a dominant force should they get a run together, and would free up RNH/Drasaitl/Yamamoto as a potential 2nd line that could be depended on to perform well enough to warrant keeping McDavid and Drasaitl separated. However the lineup falls, Puljujarvi figures to be a big factor in whatever heights this team can soar to in 21/22.