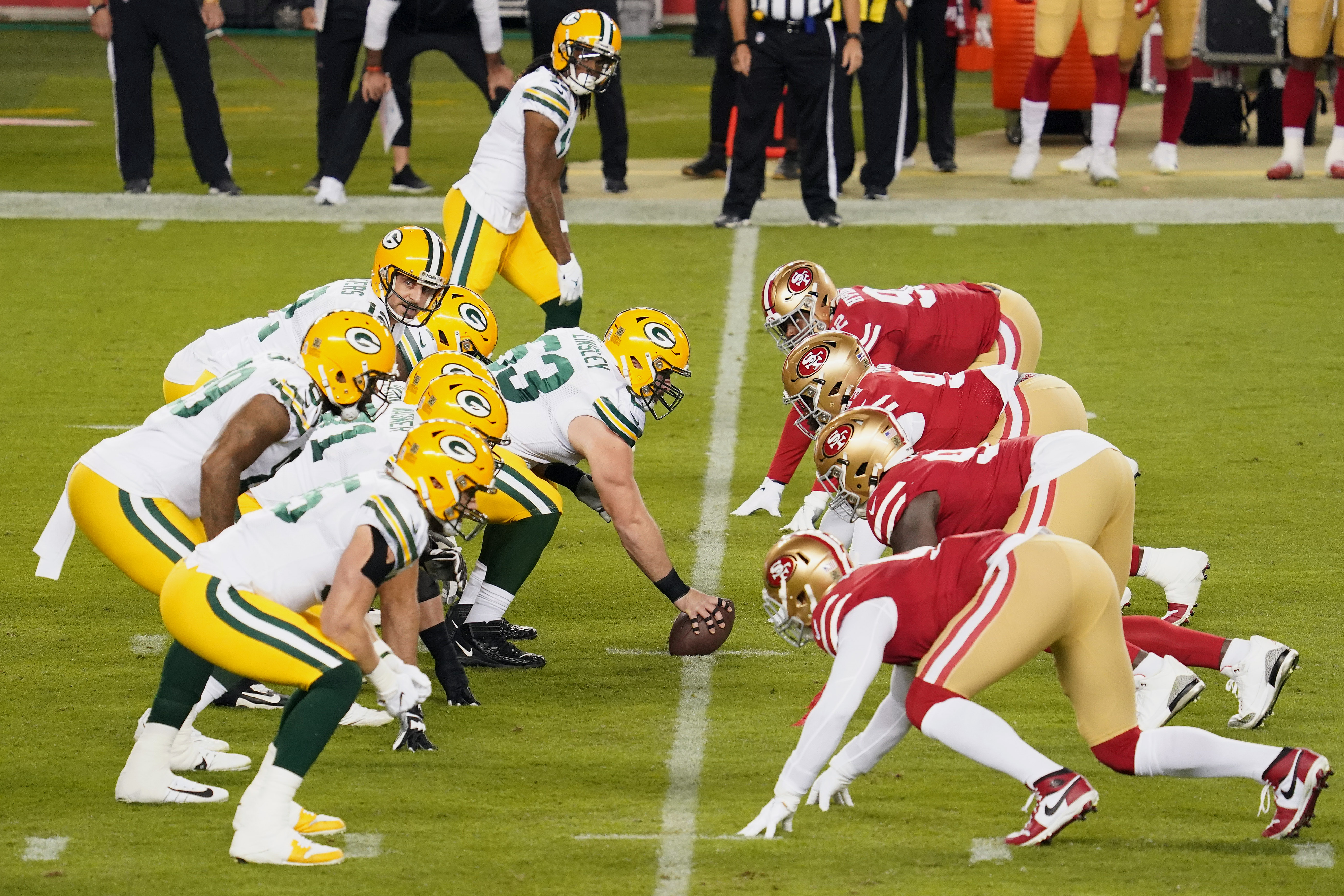 The Green Bay Packers hope to build on last week’s home win over Detroit when they head to the Bay Area to take on the San Francisco 49ers on Sunday night.

The Packers enter the game with a 1-1 record and are tied for first place in the NFC North after last week’s 35-17 win over the Lions. The 49ers are off to a 2-0 start after winning in Philadelphia last week 17-11. The game has the potential to have playoff tiebreaking implications by the end of the season.

The Packers hold a 33-28-1 advantage all-time while the teams have split their eight playoff meetings. Green Bay has won three of the last four regular-season games between these two clubs including a 34-17 win on the road last season.

Here is a look at six key factors that will determine who wins Sunday night’s contest:

The 49ers have a formidable front seven and can get after the passer. Nick Bosa is the leader of this group and he already has three sacks in two games. Arik Armstead and Dee Ford are also capable pass rushers although Armstead has missed practice time this week due to injury.

The Packers face a challenge here due to the health of their offensive line. Starting left tackle Elgton Jenkins missed practice midweek due to an ankle injury. He is already stepping in for David Bakhtiari who remains on the PUP list. If Jenkins can’t go, the Packers will either move right tackle Billy Turner to the left side or start Dennis Kelly at left tackle and keep Turner on the right side. Whoever starts at left tackle will have their hands full trying to keep Bosa away from Rodgers.

Left guard is also uncertain as the Packers started Lucas Patrick there in Week 1 and Jon Runyan, Jr. in Week 2.

The Packers are also starting two rookies on the offensive line in center Josh Myers and right guard Royce Newman.

Even when healthy the Packers offensive line is a work in progress. They will need to play well on Sunday to give Rodgers time to work his magic.

The running game came back to life in Week 2 against the Lions and the Packers will need to continue to run the football enough to keep the San Francisco defense guessing.

San Francisco’s run defense has struggled early in the season, allowing 133.5-yards per game (27th in the league) in their first two contests despite having a big lead against Detroit and a 2-0 record on the season. Last week, Philadelphia 151 yards rushing against the Niners although 82 of those yards came on scrambles by quarterback Jalen Hurts.

The Packers will need to get Aaron Jones and A.J. Dillon going in this game to keep the defense off-balance and keep the chains moving. Which running back will get most of the work should depend on who is more effective early and what kind of defense the 49ers run.

If the Packers can mix runs and passes, their play-action passing game will fall into place as well and that makes the offense even more effective.

The Packers defense has struggled to stop the run in recent seasons although they did a respectable job against a Lions team that isn’t known for running the ball well.

The 49ers are a much better ground game with Eli Mitchell and JaMycal Hasty leading the way after Raheem Mostert was lost for the season due to injury. Mitchell has gained 146 yards in the first two contests while Hasty is averaging a healthy 6.8-yards per rush in limited carries.

Mitchell is a fast, one cut, runner who can break long gains if given that initial hole. The Packers defensive line, led by Kenny Clark, will have to hold their own along the line of scrimmage to give linebackers like Krys Barnes and De’Vondre Campbell a chance to stop these runs before they get down field.

If the Packers can contain the running game and force the 49ers into obvious passing situations, they have a good chance of forcing some turnovers.

The Packers have a big challenge here as Garoppolo has only been sacked once in two games while the Green Bay defense has recorded only one sack in the opening two weeks of the season.

Last week, the Packers got no pressure on Jared Goff in the first half and he picked the defense apart. In the second half, LaFleur had defensive coordinator Joe Barry blitz more and the team at least hurried Goff more often and that helped the Packers keep the Lions off the scoreboard over the final 30 minutes.

The Packers clearly miss Za’Darius Smith who will miss at least the next two games with a bad back. It will be up to Rashan Gary and Preston Smith to get pressure on Garoppolo. Gary has four of the Packers nine quarterback hits this season according to pro-football-reference.com but he has yet to record a sack.

When you give Garoppolo time, he can be very accurate and he’s already completed 70.9 percent of his passes this season. Getting pressure on him will be crucial to slowing down the San Francisco offense.

The Packers offense needs to spread the ball around more on offense. Last week, the focal points of the passing game were Davante Adams and Aaron Jones.

The Packers second and third wide receivers both failed to catch a pass as neither Allen Lazard nor Marquez Valdes-Scantling had a reception.

Rodgers needs to involve his tight ends, running backs and secondary receivers in this game. The Packers wideouts will have a big size advantage over 5’9” K’Waun Williams while veteran Josh Norman and rookie Ambry Thomas are both listed at 6’0”. That means Lazard (6’5”) and Valdes-Scantling (6’4”) should be able to take advantage of these size mismatches.

Adams is always a reliable receiving threat and the Packers should again take what the defense gives them and use their pre-snap motion and play calling to scheme players open and then set up big plays downfield.

The Packers will have to find a way to slow down third-year receiver Deebo Samuel who is off to a great start this year for San Francisco. The matchup of Samuel against Jaire Alexander will be a great game within a game to watch on Sunday night if the Packers choose to keep their top corner on the Niners best wideout.

Samuel has great speed and already has 15 catches for 282 yards and a touchdown this season in just two games. That includes a 79-yard touchdown catch against the Lions in the season opener.

Samuel has great speed and is great at gaining yards after the catch with his downfield vision and anticipation.

Alexander is off to another strong start this season after earning Pro Bowl honors a year ago and proving he can be one of the league’s best cover corners.

The Packers will also have to contend with tight end George Kittle and De’Vondre Campbell and the Green Bay safeties may have their hands full trying to slow him down as well. Kittle is one of the elite tight ends in the NFL and he has hurt the Packers badly in the past.

The Packers looked better against the Lions last week, but the 49ers are a much more talented team than Detroit. LaFleur’s teams have struggled on road trips to California since he took over as head coach in 2019. In fact, the Packers are 1-3 in California under LaFleur and were beaten very badly in all three losses. The only win came last year against a depleted 49ers team.

Rodgers will have to be on his game and the Packers defense must play better than it did in the first two weeks. The injuries along the offensive line come at a bad time for Green Bay as Rodgers needs time to throw the football. If LaFleur is smart, he goes to quicker release, short passes this week.

The only way the Packers win this game is in a shootout against a team that runs a similar offense. The Packers will keep it close, but this won’t an easy matchup and the short week doesn’t help.