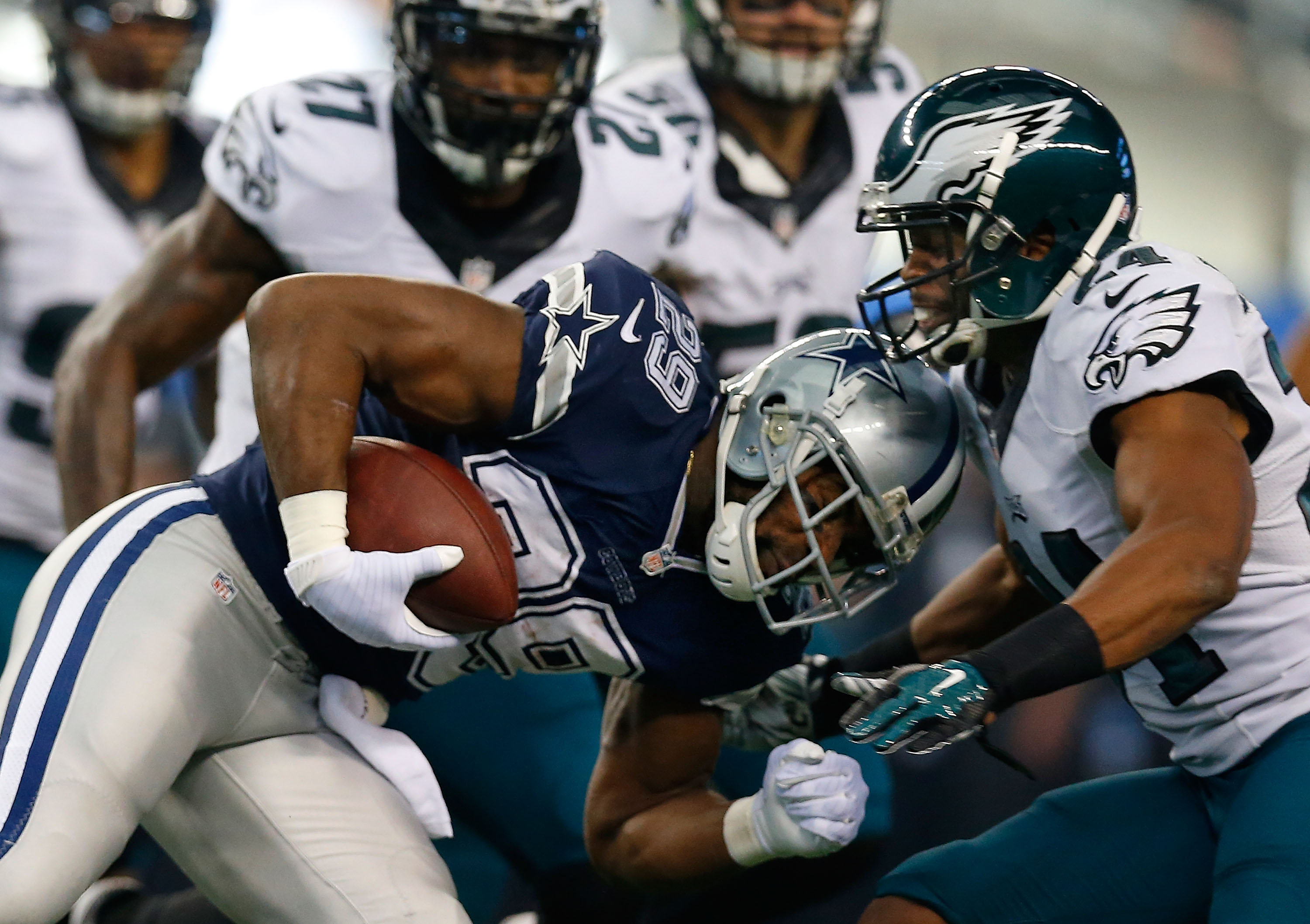 To start, keep an EYE on Jordan Mailata’s sprained knee (suffered in practice this week). Not good, except it possibly gives Andre Dillard a precious shot to prove he can hold down the left tackle position in a critical situation…which would be nice to see. This summer, Mailata and Dillard were in a position to battle for that job and Mailata won it cleanly. Then the Eagles handed the 6-foot-8 Australian a $64 million contract before the opener. Last week against the 49ers, Mailata had one of the best games of his career while going against former Pro Bowler Nick Bosa.

Dillard, 25, has been cross-training at left and right tackle for the past couple week since he’s been a backup. Offensive line coach Jeff Stoutland said Dillard has handled his new role well.

When the Eagles selected Landon Dickerson in the 2nd round, the immediate assumption would be this would be a red shirt season for him. He was coming of an ACL, and many thought he may not even be ready to play. But only 3 weeks in, he is ready to make his first start. He played a bit in week 2, but he did not go into the game as the starter. With Brandon Brooks now set to miss eight weeks with a pectoral injury, Dickerson has a chance to prove himself at this level.

His week 2 performance was shaky. In run protection he looked the part of a 2nd round pick. In pass protection, less so. He gave up 5 QB pressures in 20 snaps of pass protection. Many argued that it is unfair to criticize him for a game he never expected to play in, but Dickerson himself is not buying that excuse.

“I could sit here and give you excuses all day, but I believe excuses breed mediocrity,” Dickerson said. “Honestly, my play was not up to the standard that we’ve set here. I wasn’t happy with the way I played. That’s been the focus this week, correcting all the mistakes I had and what I need to work on.”

The Cowboys defensive line is not as formidable as the 49ers was. Outside Micah Parsons they have not generated much of a pass rush. And Dickerson is not likely to be blocking Parsons on many snaps. A full week of first team reps, and having former All pros Jason Kelce and Lane Johnson on either side, should be a big help for Dickerson going into his first start.

2) Will the Real Eagles Offense Please Stand Up?

The Eagles week 1 and week 2 offense was like watching a different team. The execution wasn’t the same, and the play calling was nowhere near the same.

The Cowboys likely do not have the personnel to take away the short game the way the 49ers did. But aside from Trevon Diggs they also don’t have the personnel to take away deep stuff. So a mix of both styles may be a possibility. It will also be interesting to see if Sirianni tries to get Hurts to throw more over the middle of the field, something he has not done so far this season.

The Eagles secondary has been very good early in the year. Avonte Maddox is allowing a pass rating of 65.8 so far this year. Darius Slay is allowing a pass rating of just 45.8. The Eagles as a whole have allowed only 162.5 passing yards per game. The Eagles are 2nd in opponent yards per pass attempt. They have allowed only one passing touchdown. Third in first downs allowed through the air. Second in yards allowed per completion. Through two games they have legitimately been one of the best secondaries in the league. Not bad for a group most thought would be the weakness of the team.

“But they have also not been truly tested yet. The Falcons have some weapons, but also have a declining QB in Matt Ryan. The 49ers have some good WRs, but Jimmy Garoppolo struggles in intermediate and deep routes. But now they will face the Cowboys, who have one of the better passing attacks in the league. This will be a good litmus test for how good this Eagles secondary really is. Though with Gallup out, and Amari Cooper hampered by an injury, a tough Dallas WR group could look average come Monday.”

“One of the Eagles biggest problems this year has been penalties. Through 2 games, they lead the league in penalties. 22 total. That ties the Eagles record for most penalties through 2 weeks. They are 8th in total yards penalized. Its a young team, with a new coach, so part of that is to be expected. But 11 penalties a game is unacceptable.”

Some of those penalties have hurt them at major moments, most notably the Derek Barnett and K’von Wallace penalties that negated big defensive plays vs the 49ers. Those two penalties took away what could have been momentum-swinging plays. The Wallace penalty even took away a turnover.  Many of the Eagles players disagreed with the penalty being called there, but it was, and it may have cost them a chance to win that game.

The Cowboys are really banged up and short on available personnel right now, so that adds to the storylines.

Starting safety Donovan Wilson has been nursing a sore groin and appears out for this game.

Their guy who was expected to be the backup swing tackle, Ty Nsekhe, was taken to the hospital last week for overnight observations after suffering an extreme case of heat exhaustion after practice a week ago Thursday and already has been ruled out for the Eagles game.

Leading wide receiver Amari Cooper has a small crack to a rib, limiting him in practice on Thursday but fully participating on Friday. Cooper insists he’s playing against the Eagles, though with the aid of a flak jacket.

Offensive tackle La’el Collins is one game into his five-game suspension for, from his agent’s point of view, a debatable violation of the NFL’s substance abuse policy.

Their best, most experienced defensive player, defensive end DeMarcus Lawrence, was pedaling down the practice field sideline Thursday on one of those kneel-down scooters wearing a huge rehab boot following surgery to repair a fractured fifth metatarsal of the right foot.

OK, now the third of their top three defensive ends, Dorance Armstrong, has a high ankle sprain and will miss the first of several games Monday.

If all that were not bad enough, RG Zack Martin already has missed the season opener landing on Reserve/COVID-19, and while he returned for the Chargers game,  Randy Gregory landed on Reserve/COVID-19 for that game and now starting nickel linebacker Keanu Neal is residing there for a close-contact protocol violation, leaving his status for this NFC East showdown questionable.

With Lawrence and now Armstrong and Anae out, there is a good chance the under-sized Micah Parsons gets snaps at defensive end again, along with rookie defensive end Chauncey Golston for the first time in his NFL career. Maybe even a few go to Azur Kamara. But with the possibility of Neal missing the game – he has a chance to play since his stay on COVID-19 reserve is for a close contact – Parsons is also needed at nickel linebacker.

In practice this week, Parsons has been with the linebackers during individual drills and then has moved over with the defensive ends. As special teams coordinator John Fassel playfully said of the kid’s enthusiasm and versatility, “He thinks he can do everything. He really wants to return kickoffs. He wants to be the backup punter. Probably wants to play quarterback.”

If ever the Eagles had an overall health advantage over the Cowboys in an early season game, this is the week to take advantage of it.