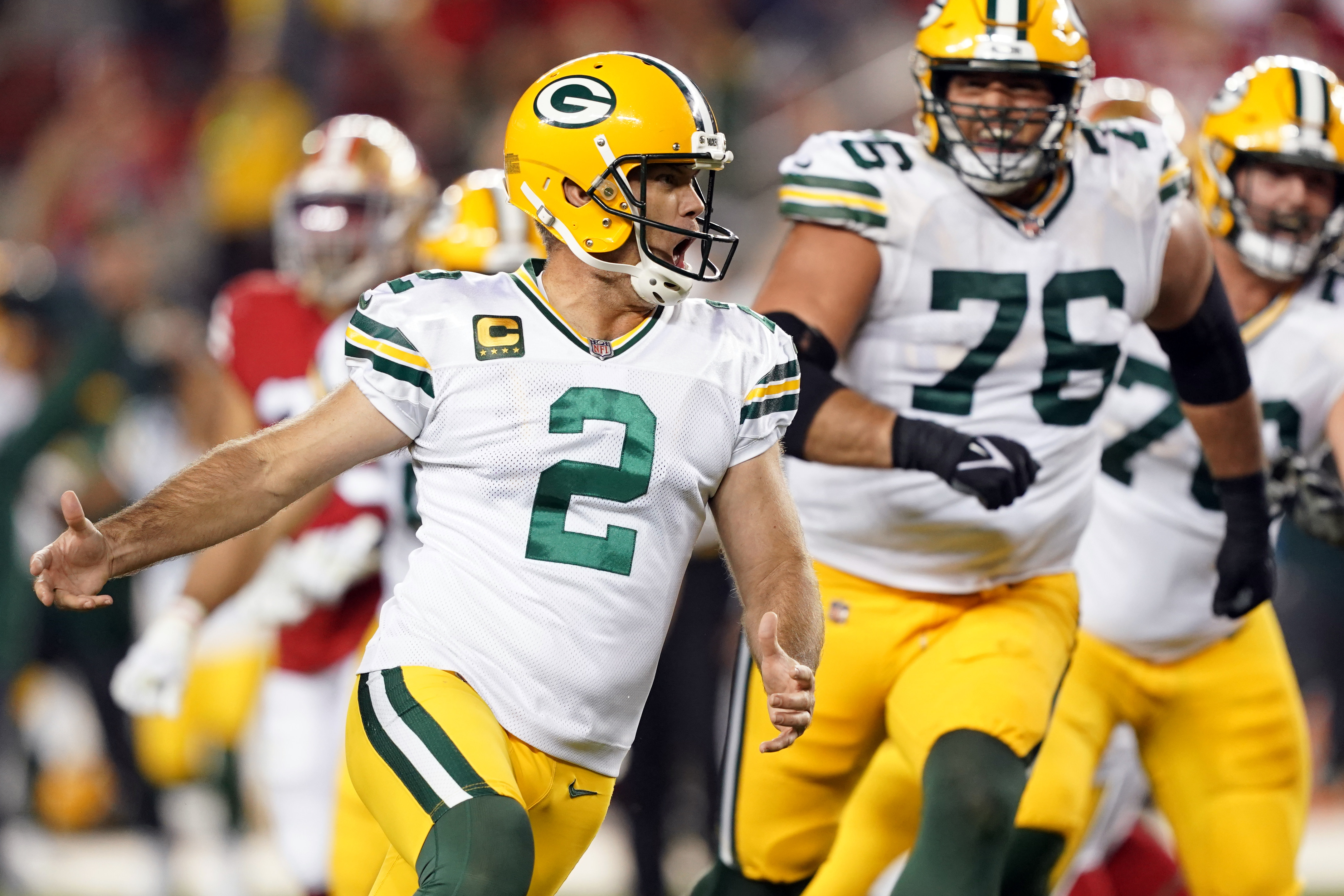 The Green Bay Packers overcame a last minute touchdown by the 49ers and defeated San Francisco 30-28 on a 51-yard field goal by Mason Crosby as time expired.

The Packers overcame injuries and a valiant comeback by San Francisco along with questionable officiating to eke out the win.

Aaron Rodgers finished the game with 261 yards passing and two touchdowns while Davante Adams had 12 catches for 132 yards and a touchdown.

The win improved the Packers record to 2-1 on the season and gave them sole possession of first place in the NFC North.

Here are 10 things we learned from the Packers victory over San Francisco:

The Packers all-time leading scorer has been with the team since 2007. The Packers needed him to kick a 51-yard field goal on the road, outdoors in front of a hostile crowd with the game on the line. No problem!

Crosby kept his cool and he delivered to clinch the win for the Packers. He hit on all three of his tries in this game including a 54-yarder early and the game winner from 51 yards away.

It is clear the Packers trust their veteran kicker and he has certainly earned that trust over time.

The Packers were hurting on the offensive line before the game even began. David Bakhtiari is still on the PUP list while Elgton Jenkins was held out of this game with an ankle injury. That left the Packers with their third left tackle, Yosh Nijman, who was making his first career NFL start, to face 49ers defensive end Nick Bosa.

Yes, Nijman struggled at times, but the Packers did give him help with running backs, tight ends and even wide receivers who helped keep Bosa at bay.

Amazingly enough, the Packers allowed only one sack and Rodgers was hit only twice according to the official score sheet.

The Packers offensive line in this game featured only one player who started last year (right tackle Billy Turner). This team gutted one out and was able to get the job done with a combination of toughness, smart play calls and design (for most of the game) and a group of skill players who came up with some big plays.

The win wouldn’t have been possible if not for the play of this unit.

Matt LaFleur’s game plan was smart early. He ran the ball frequently right from the start of the game and used short, quick passes to slow down the San Francisco pass rushers and to set up some shots downfield that paid off later in the game.

The one-yard touchdown pass to Adams was well schemed and almost impossible to defend.

In the second half when protecting a lead, LaFleur and Rodgers got away from the shorter passing game and it cost them as the team struggled to complete longer passes and had some ill-timed three-and-outs.

Still, the offense did its job, scoring 30 points on the road against a talented defense and coming up big in the final minute when all seemed lost.

Rodgers finished the game by completing 23-of-33 passes for 261 yards and two touchdowns. His passer rating was 113.3. Some of those incompletions were spikes designed to stop the clock late in the game.

Yes, Rodgers was shaky in Week 1 against the Saints, but the reigning MVP showed he can still play extremely well and all the off field distractions from the offseason do not appear to be affecting his game.

Rodgers cashed in on some long passes downfield including a 42-yarder to Allen Lazard and a 47-yard bomb to Marquez Valdes-Scantling.

Adams was back to his dominant self. He took a dirty head shot in the second half and was down on the field for more than two minutes. Tae passed the concussion protocols and managed to return to the game.

The 49ers defense had trouble staying with Adams who consistently caught short passes underneath and gained important yards after the catch and then set up the longer throws downfield for both himself and his teammates.

The Packers don’t want to lose Adams after this season. Right now, the former Fresno State star is doing everything he can to show he deserves another big contract after this year.

Any critics who claim the officials across the league favor the Packers certainly didn’t watch this game. In addition to the missed head shot (and a late hit on a defenseless receiver as well) against Adams in the second half, the referees gave the 49ers a lot of help in this game.

A dropped pass was not overturned against the Niners and San Francisco got a questionable roughing the passer call against Jaire Alexander and a call before the half that cost the Packers some points as well.

LaFleur was seen on the sidelines yelling at the officials far too often in this game and he usually had a good reason to be upset.

To their credit, the Packers overcame the officiating and a tough 49ers team to win the football game.

Joe Barry’s defense delivered more pressure in this game and kept Jimmy Garoppolo under duress. The Packers were credited with four sacks in this game.

Preston Smith and Rashan Gary did a good job getting after the quarterback and Jonathan Garvin and T.J. Slaton each had a half sack on a play set up by Tyler Lancaster’s inside charge.

As a team, the Packer defense was credited with 11 quarterback hits in this game. Smith had three while Gary and Garvin had two each. This was the kind of pressure the Packers need from their defensive line this season.

With Kevin King unavailable due to illness, rookie Eric Stokes stepped in and played well enough to earn more chances to start. Stokes was called for pass interference a couple of times and was beaten on a few other passes, but he never got discouraged and finished the game with five tackles and one pass broken up.

Stokes still has much to learn, but he showed potential and looks like he should be a solid CB2 sooner rather than later.

If the Packers can live with the inconsistency of King, they should be able to live with the growing pains of Stokes who has a much higher upside.

It’s no shame to by outcoached by Kyle Shanahan, one of the best play callers in the business. Down 17-0, Shanahan made some great play calls to get his team back into the game and eventually take the lead.

His ability to use the tight end and fullback effectively helped move the ball and despite not having his usual running backs available, Shanahan team ran the ball 21 times, enough to keep the Green Bay defense honest.

He also went for it on the final play of the first half and was rewarded with a touchdown run by rookie quarterback Trey Lance.

This game was a great chess match between two very similar play callers. The Packers had the advantage in the first half, the 49ers in the second but the Packers came through with just enough to win the game.

It would have been easy for a team that blew a 17-0 lead on the road to get discouraged and accept their defeat, but the Packers didn’t do that.

They also didn’t get discouraged when several questionable calls went against them throughout the game or when Krys Barnes was lost for the rest of the game due to injury or when they were playing with their third string left tackle.

The Packers kept their cool under pressure, overcame all obstacles and earned a gritty road victory. This game could have playoff tie-breaker implications at the end of the season and was a real test for this Packers team that has now officially bounced back from the disaster that was Week 1.