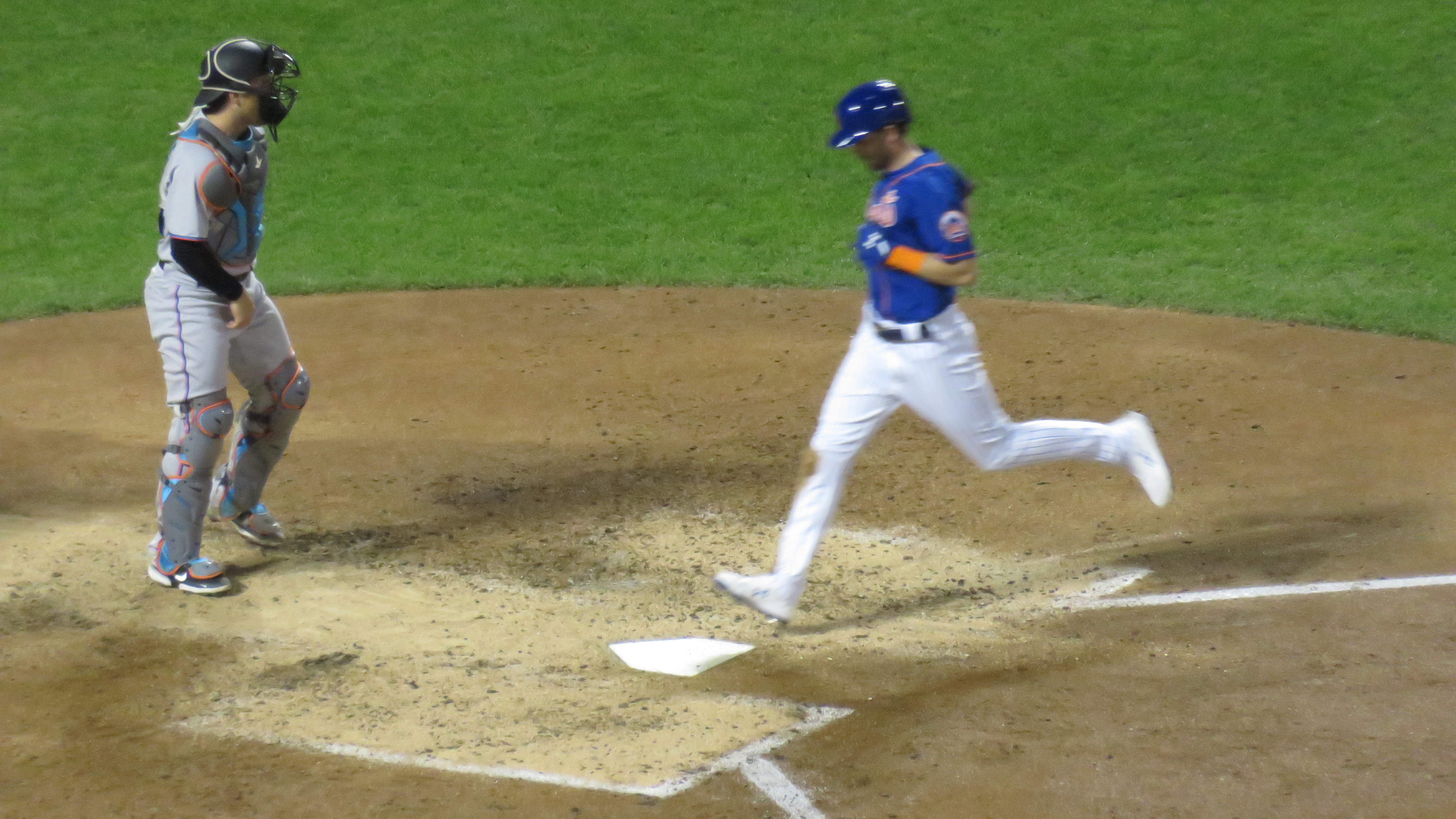 It occurred to me while I was on my way to Citi Field for “Closing Night” that I will had gone to three games during the 2021 season. Three is a far cry from the 10-15 games I normally see during a season. But considering everything going on, I feel lucky to have gone to three. Three games, in addition to being better than the zero attended in 2020, seemed much better than two games which is why I got a cheap ticket and attended last night.

The first game I went to featured the return of Matt Harvey, and the Mets shelling Matt Harvey. In other words, the ghost of Christmas past.

The second game was the start of their run against the Dodgers and Giants that ultimately foretold the collapse that we were about to see, starting with James McCann overthrowing a toss back to the pitcher which led directly to the fourth run and caused the game to go to extra innings. The ghost of Christmas present. 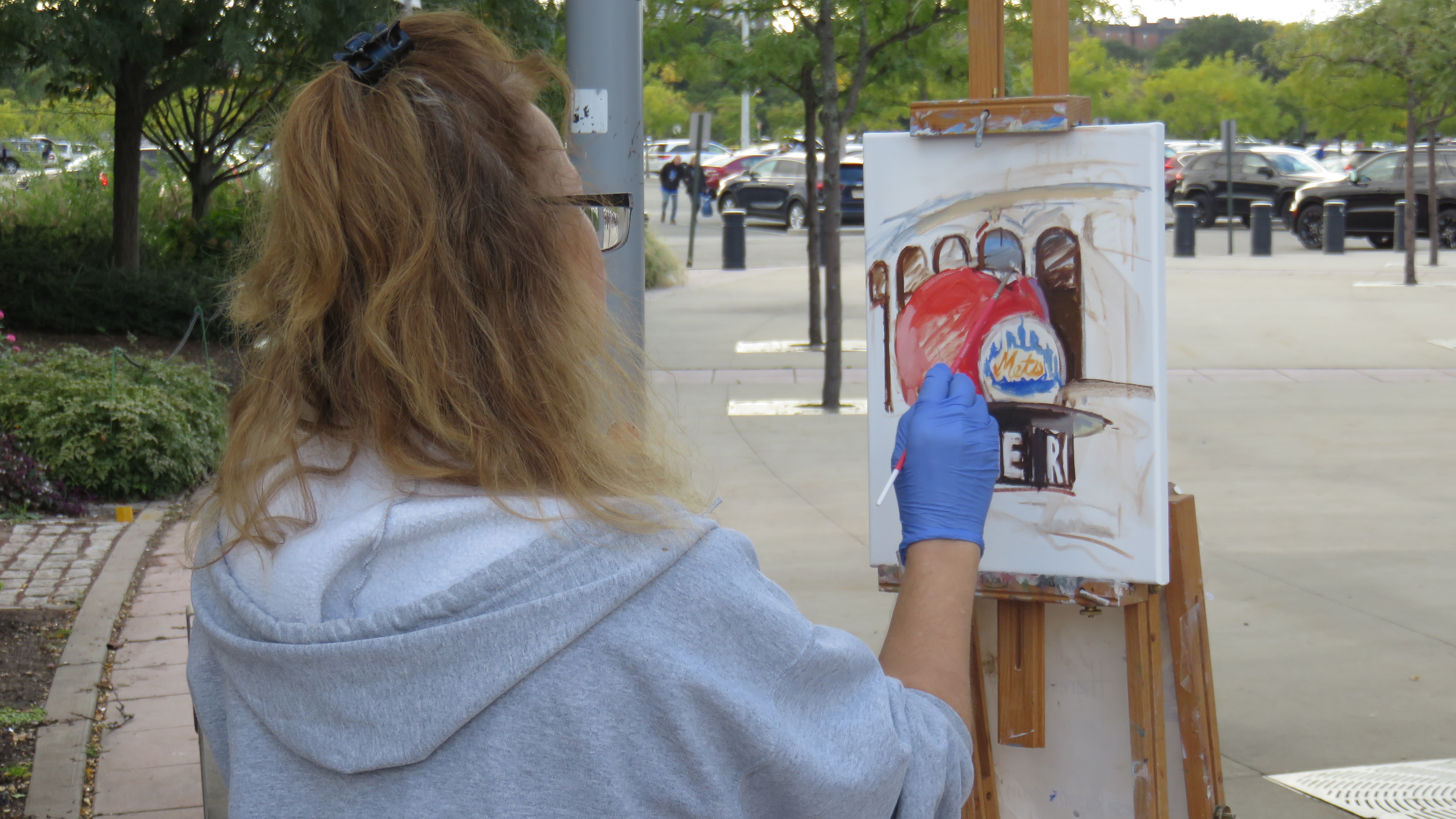 This lady was nice enough to consent me to take a picture of her painting a picture. (Metstradamus)

Then there was last night, which I hope was a visit from the ghost of Christmas yet to come in the form of 12 runs against the Marlins. I would hate to think that scoring 12 runs in a meaningless game would only amount to a cry of “great, now they freakin’ score”, and not be a taste of what’s yet to come. James McCann had his 600th career hit: a double which scored two runs in the 4th to put the Mets in the lead for good 5-3. (It was in this inning that somebody named Sean Guenther used the Mets for target practice, hitting both Javy Baez and Jeff McNeil to start the inning.)

Pete Alonso hit two home runs, and could have had three except for the fact that Magneuris Sierra made an unbelievable catch to rob him of a home run to end the 4th inning. But considering Pete hit his second home run in the 8th off catcher Sandy Leon, two is a fair number. 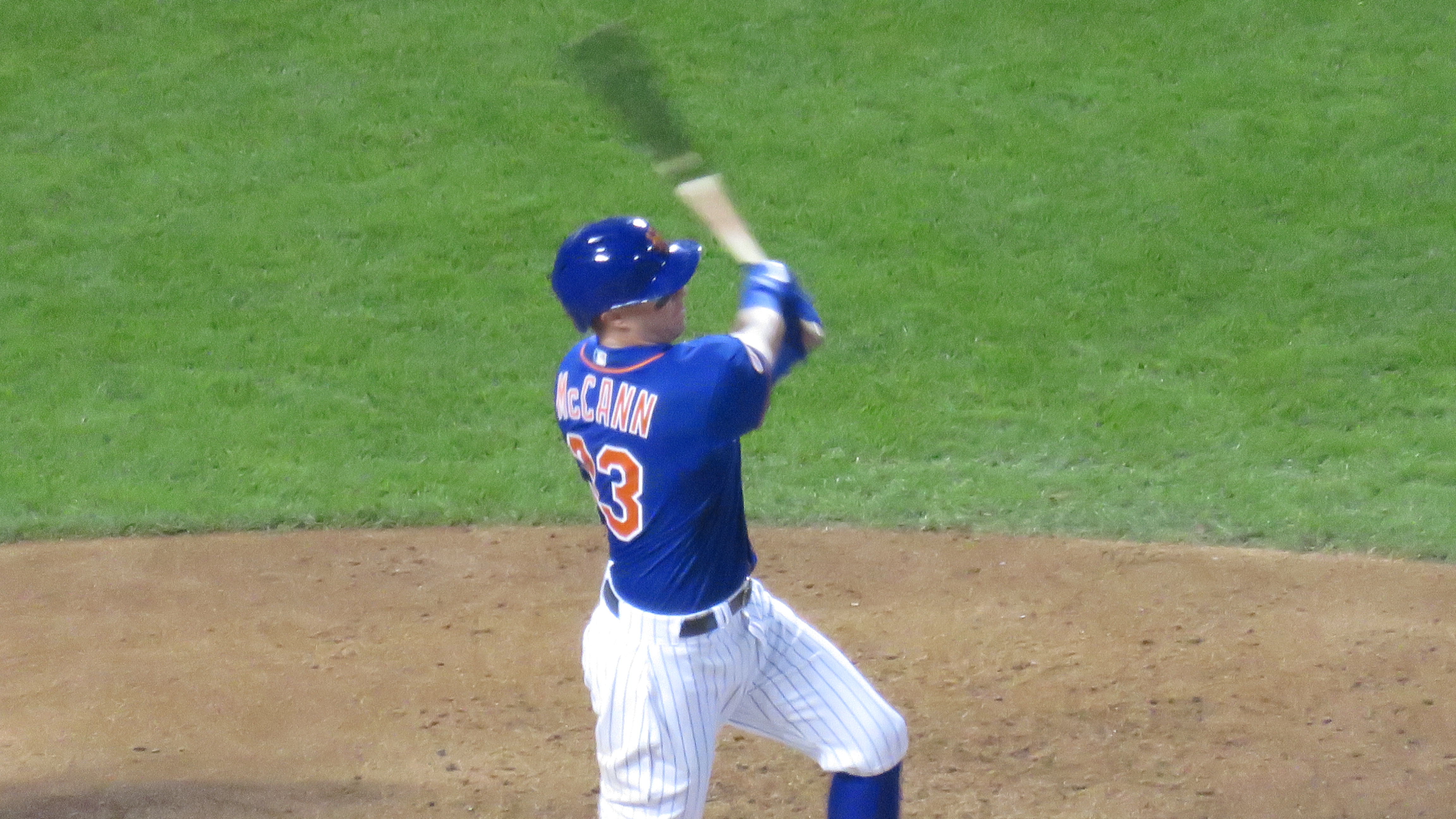 Then there was Francisco Lindor.

The Mets drew 1,511,926 fans to Citi Field this season. For reasons (mostly) pandemic (but also) performance-related, it's by far the lowest total in ballpark history.

The last time attendance was this low in Queens was the post-strike 1995 season at Shea Stadium.

The above tweet was the one that I was responding to on my phone when I heard one of the loudest cracks of the bat I might have ever heard. Sure enough, it was Lindor’s grand slam in the 8th which broke the game wide open. It was a shot which reverberated around the stadium, half due to the force in which Lindor hit that ball, and half because the sound bounced off the empty seats. No matter. It probably ruined any chance of a top ten draft pick, but I’ll always remember the sound.

Michael Conforto had himself a decent ballgame as well. He singled home a run in the 3rd, singled home a run in the 4th, had three hits total, and made a great rolling catch in the 9th. Fans in the stands, knowing that this could be it for him in a Mets blue alternate home uniform, chanted “Mike Con-for-to” in the 9th. Now my eyesight isn’t as good as it used to be, so I couldn’t see the tears well up in his eyes from section 326, either during the inning or in the handshake line. Certainly, being cognizant of the moment where the fans are being cognizant of the moment brought about some emotion. Perhaps enlisting the help of the true ghost of Christmas yet to come: Scott Boras, is certainly a sign that the emotion may have come from the fact that “yeah, I didn’t hire Scott Boras to resign at a hometown discount so I’m probably gone but my how time flies and oh my God this really might be it!” 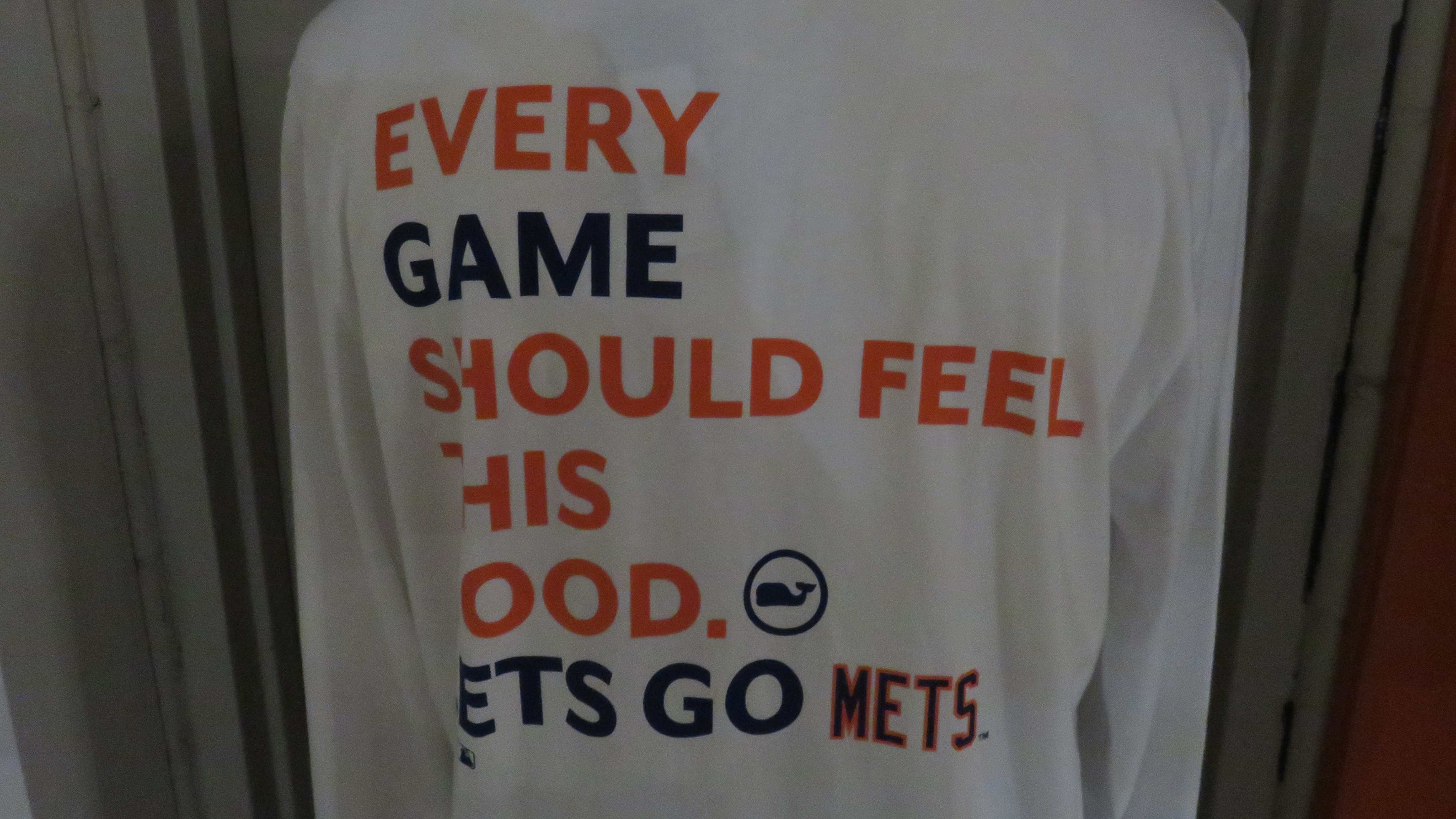 Yeah, every game should have felt as good as the 12-3 Closing Night victory. (Metstradamus/Vineyard Vines)

So that’s it. Another home season is in the books after a 12-3 victory over a Miami team that had nothing to play for since the Mets weren’t one game away from elimination, which as we know is when Miami does their best work. Colin Cosell’s P.A. announcement that the next Mets home game would be on March 31st against the Washington Nationals, “time to be determined”, was a jarring reminder that the closing of the home season begins the inevitable march towards Christmas in December, since there is no Christmas in October for Mets fans. So Santa, if you’re reading this, I want to let you know that the ghosts that visited me during the three games I went to didn’t teach me any damn lessons, except not to gorge on rice balls because there won’t be any until March. So I deserve something extra special for the holiday this season. I’m not picky. Just contracts for Marcus Stroman, Javy Báez, a decent designated hitter, another good starting pitcher, and a new CBA by December 1st.

I’ll leave cookies in the mailbox since I don’t have a chimney. Please don’t send any more ghosts.