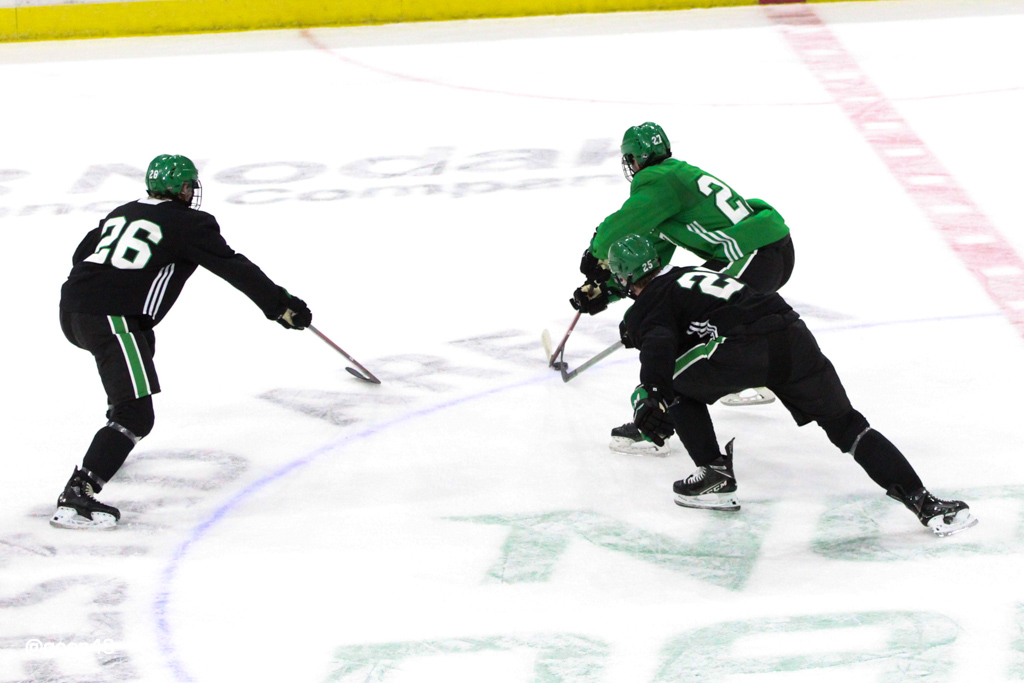 As we turn the page to the 2021-22 college hockey season, the UND hockey media once again had face-to-face access to the UND hockey players. Due to the Covid-19 virus, I had never met UND sophomore defenseman, Jake Sanderson during the 2020-21 season. Last week, I finally got to meet him. My first impression, Sanderson already carries himself like a professional.

Last Spring, after the 2020-21 college hockey season, the Ottawa Senators were interested in signing Sanderson (2020 NHL Entry Draft, 1st round, 5th overall) to an entry-level deal. Why wouldn’t they? Sanderson had a productive freshman season scoring (2g-13a—15pts) in 22 games and led all UND defensemen with a plus-20 rating

On Twitter, Senators fans have pontificated at the prospects of having Sanderson in the Senators lineup. They will have to wait. Sanderson has other plans. Sanderson is back with UND for another season.

How hard of a decision was it to come back?

“It was tempting,” Sanderson said. “That’s your dream, playing in the NHL. I think you have to go when you’re hundred percent ready. I felt like I had some stuff to improve on this upcoming year. I was very excited to come back, just with the coaching staff we have and my teammates. It was pretty easy to come back.”

If it weren’t already clear, this answer to me all but confirms Sanderson will turn pro following next season #NoDakSens https://t.co/z48aX2QkmV

If you watched last season’s five-overtime NCAA Midwest Regional final, you’ll know that the Fighting Hawks have some unfinished business.

“Even though we lost, I am never going to forget that game,” Sanderson said. “It was pretty special. I definitely have a chip on my shoulder. I think we’ll have that in the back of our minds this year. We’re going to be ready.”

Upfront, UND lost a lot of their offensive firepower, however, they’re going to have a very talented backend.

“I’m excited about our d-core,” Sanderson said. “I think everyone can play. We got eight guys that can skate and have the offensive ability. (We need to) be supportive of everyone and make everybody better in practice. I think our d-core is going to be a strength of this team this year.”