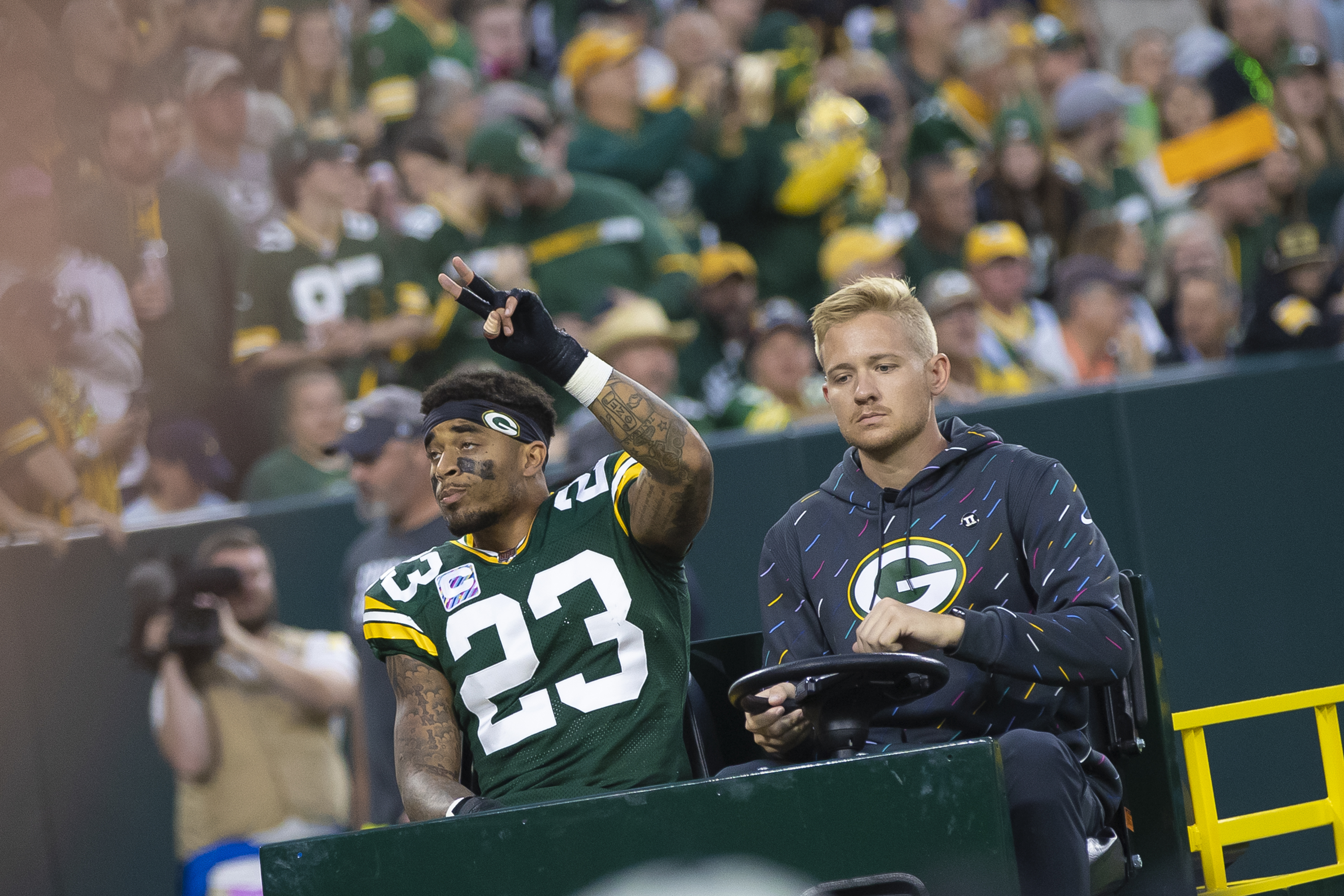 The Green Bay Packers have won four straight games and are alone in first place in the NFC North with a 4-1 record. The team is winning despite a rash of injuries that have devastated the roster.

These injuries have hurt the team’s ability to execute certain aspects of their game plan but the players and coaching staff have found a way to overcome them and to continue to win football games.

Here is a look at the injuries the Packers have dealt with and how they have affected the team thus far this season and how the team has overcome them by position group.

No position group has been hit harder than the offensive line this season and the injuries here have had the biggest affect on the team thus far.

All Pro left tackle David Bakhtiari has missed the entire season because of a knee injury he suffered late last season. He is still on the PUP list although he will be eligible to start practicing with the team after this week’s game with the Bears. Once he starts to practice, the Packers will have three weeks to either put him on the active roster or put him on season-ending IR.

The Packers initially moved Pro Bowl left guard Elgton Jenkins to left tackle and he played well there over the first two games. But Jenkins injured his ankle and has missed the last three contests as a result, leaving the Packers without their top two offensive linemen.

Yosh Nijman stepped in and started the last three games. Nijman has not been spectacular, but he’s been more than serviceable and Rodgers has been able to execute the offense even if head coach Matt LaFleur, offensive coordinator Nathaniel Hackett and quarterback Aaron Rodgers have had to adjust their play calling because of the injuries along the line. The Packers had to keep tight ends, running backs and even on occasion wide receivers in to help Nijman contain edge rushers on the left side.

Center Josh Myers missed the Week 5 game against Cincinnati with a finger injury and Lucas Patrick filled in and played a solid game. Patrick started at left guard in Week 1 but was injured and then lost his job to Jon Runyan, Jr.

Rookie Royce Newman and right tackle Billy Turner are the only Packers offensive linemen to start every game this season. Turner has truly been a leader and the glue that holds this group together.

Rodgers had praise for his makeshift offensive line. “There are some guys in that locker room and guys that played, they weren’t with this football team in August and weren’t with this football team in June,” Rodgers said. “A lot of big plays and high-volume play counts for guys who we didn’t count on being important. I said during the week that if you had told me it’d be Yosh (Nijman), (Jon) Runyan (Jr.), Lucas Patrick, Royce (Newman) and Billy (Turner) as the starting five (on the offensive line), I would have said, ‘Oof, I hope that turns out.’ But man, those guys have played (well). They really have. I’m proud of them.”

The lack of continuity on the offensive line has hurt the Packers in the red zone and changed their game plan, but the team is still 13th out of 32 teams in points scored this season.

The offensive line is not the only area that has been hurt by injuries. The defensive secondary has also been hit hard. Jaire Alexander, the Packers best cover corner has been placed on IR with a shoulder injury. We are still unsure if the injury will ultimately require surgery, but the Packers are hoping to get him back later in the season.

The other opening day starter at cornerback, Kevin King, missed two games due to a concussion and had to leave the Bengals game with a shoulder injury. His status for Sunday’s game in Chicago is uncertain.

Eric Stokes, the team’s first-round pick this year, has been pressed into starting duty and while he has made his share of rookie mistakes, he has played well under difficult circumstances. Stokes has made an interception and used his speed to prevent being beaten downfield. The Packers have forced to make him learn on the fly and have had to deal with his growing pains, but overall, Stokes has showed potential.

If King is unable to play Sunday against the Bears, Isaac Yiadom, rookie Shemar Jean-Charles and slot corner Chandon Sullivan will all be pressed into larger roles and defensive coordinator Joe Barry will have to adjust his strategy accordingly.

In addition, the Packers just signed veteran cornerback Quinton Dunbar although it’s not clear how soon he will be able to play.

The Packers have also played almost the entire season without their best pass rusher, Za’Darius Smith. He saw limited action in Week 1 against the Saints and then had surgery on his injured back. In his absence, Preston Smith and Rashan Gary have taken over as the team’s top two while Jonathan Garvin has gotten more reps as the team’s third edge rusher.

Barry has been able to get more pass rush from this team as the season has progressed but the lack of depth on the edge is a concern over the long haul. Barry has changed his schemes and pass rush packages to compensate for the loss of Za’Darius and thus far it has been effective.

The offense has also been without speedy wideout Marquez Valdes-Scantling as he nurses a hamstring injury. MVS is the Packers best deep threat and his ability to stretch the field is certainly missed.

Blocking tight end Dominique Dafney has also been placed on the IR with Josiah Deguara and Marcedes Lewis taking most of his snaps.

On defense, inside linebacker Krys Barnes missed a game and parts of others due to a concussion. Oren Burks and Ty Summers filled in while he was out of the lineup and the results have been mixed with Burks performing better than Summers right now. The Packers signed former Cowboys ILB Jaylon Smith who still needs to learn the playbook before he can take the field.

The Packers are still winning despite these injuries and the adjustments they’ve had to make. But the schedule is about to get much tougher and the challenges will continue. The players and the coaching staff will have to be up for this challenge if the team hopes to contend for a Super Bowl in what may be their “Last Dance” season.

Championship teams overcome injuries and still find a way to win. The Packers have done that so far, but there is still a long road ahead for this team.