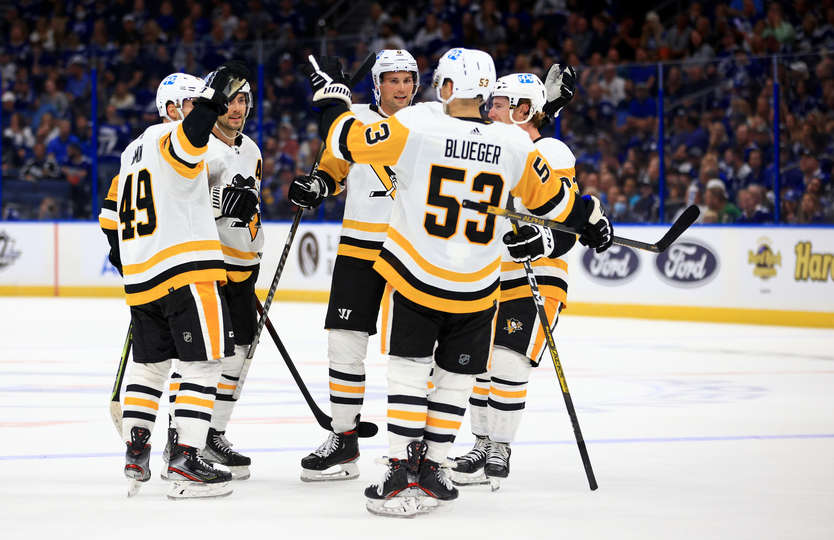 TAMPA, FLORIDA – OCTOBER 12: Dominik Simon #49 of the Pittsburgh Penguins celebrates a goal during the third period of a game against the Tampa Bay Lightning at Amalie Arena on October 12, 2021 in Tampa, Florida. (Photo by Mike Ehrmann/Getty Images)

It was a banner night for the Penguins.

On the road for the first game of the season against the two time defending Stanley Cup champions and they walked in to Amalie Arena on a mission.

That mission was to play suffocating, buzzkilling hockey that sucks the will and eventually life out of their opposition. 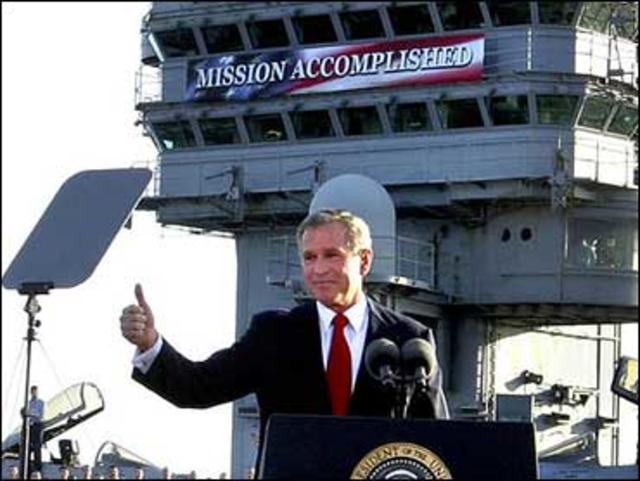 If there’s one word to describe the first period, it’s “art.”

It was a masterclass in bombarding your opponent with all of the hallmarks of a great Mike Sullivan coached team.

They did everything but score.

That big turning point came in the 2nd period when Danton Heinen scored just 12 seconds into the frame.

Perhaps nothing epitomized the Penguins rabid play more than this goal.

It’s a simple play all around, too.  Jeff Carter wins the draw and the Pens work it through the neutral zone with a little chip play from Heinen to Rust.  From there, it’s just one team working harder than the other, a staple the Pens hammered out all game long.

As the Lightning try to set up for a breakout, it’s Carter getting in on Vasilevskiy, who you have to say is left on an island here.  Only Point is in support.  Carter blocks down the clearing attempt and it’s all gravy for the new boy.

If you weren’t sold on it yet, the Penguins turned it on even more about 4 minutes later.

Again, it’s some rabid play that sets up the 2nd goal.  The Penguins remained heavy and determined on the forecheck, forcing Killorn to take the Erik Gudbranson style of defending: relieve pressure with a backhand dump to the neutral zone and hope it works out.

John Marino picks it up at center ice, holds it long enough for the 4th line forwards to get back onside, and recycles it to Drew O’Connor coming high in support.  The Lightning are reeling here and simply get caught with the Pens forwards in between their forward group and defensemen.  All Lafferty has to do is make a picture-perfect pass to Boyle sneaking in on the weak side and it’s game, set, and match.

Tampa, you have to say, never really did recover from this second goal.  They had a chance midway through the second on their lone powerplay of the night, but Jarry and the Pens PK really stood tall in shutting it down before Dom Simon added a third midway through the 3rd frame from yet another meaty forecheck.

Jon Cooper would go on to pull his goalie for the extra skater with about 6 minutes left in the period down 3.  It paid immediate dividends as Cirelli tipped one in to break the shutout, matched only by Blueger netting a gimme 30 seconds later.  Killorn would strike, but ERod and Rust would find the vacated twine to put the icing and cherry on top of a very professional performance. 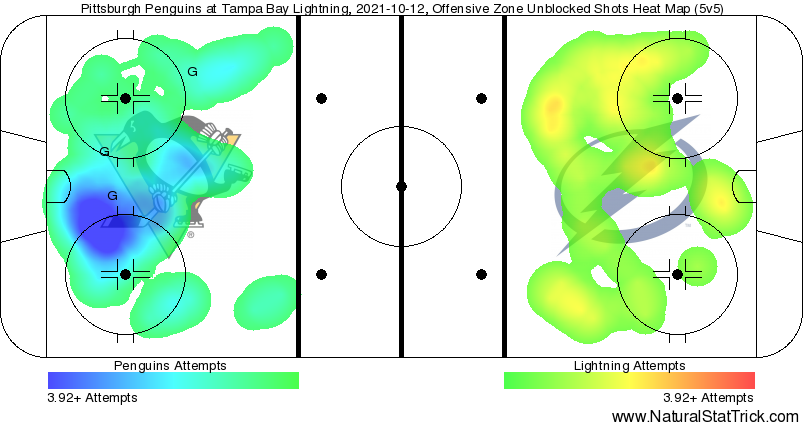 Brian Dumoulin is so good that he disrupts zone entries even when he isn't on the ice. pic.twitter.com/Rdv9xNAiZN

Pens are back at it on Thursday as they head to Sunrise to wrap up this mini 2 game Florida road trip to take on the Panthers.  Do it.

Note: All data provided via NaturalStatTrick.com