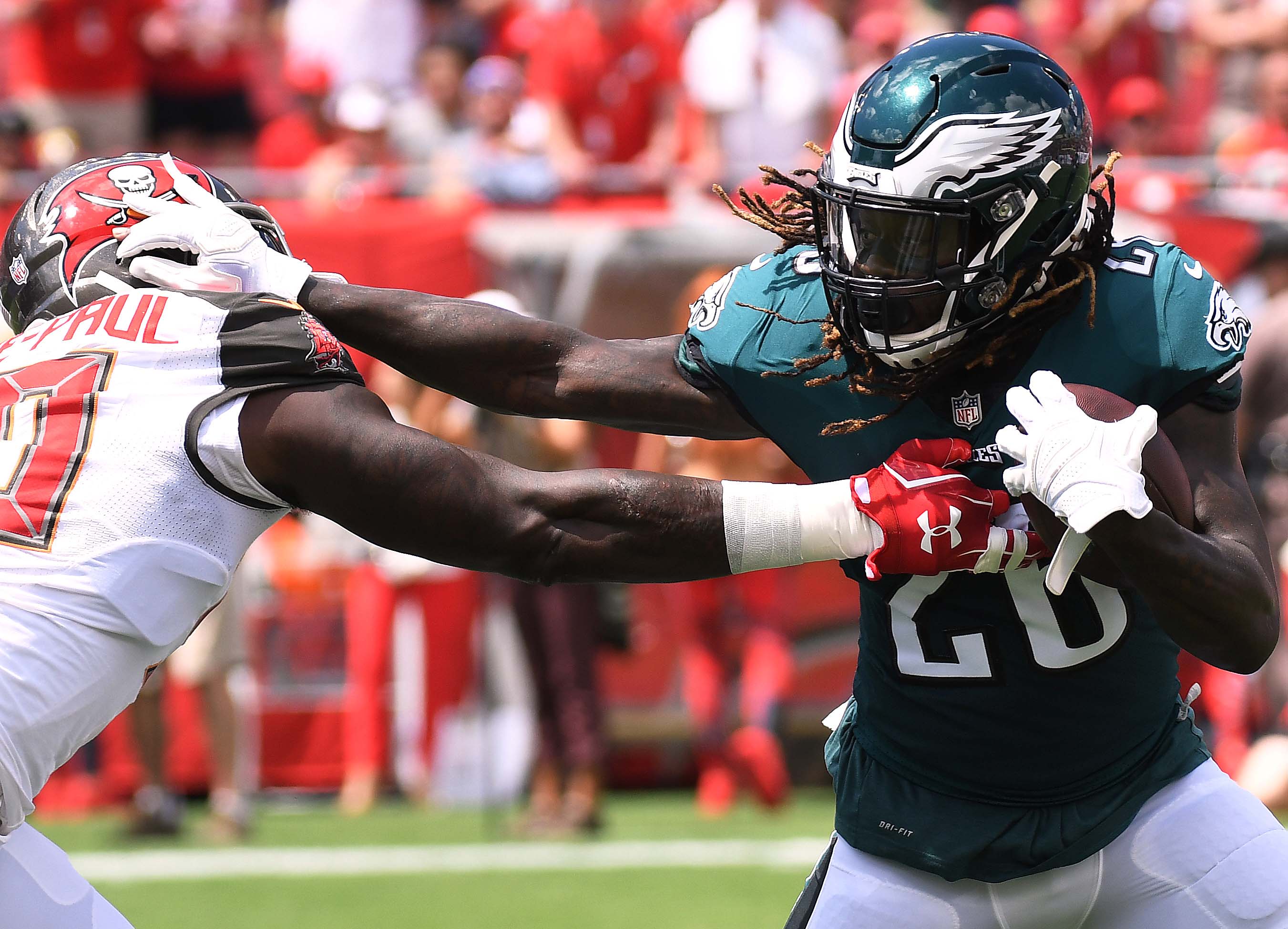 There were times in this game when absolutely nothing was working for the Birds in any phase of the game…  times when the Eagles (and their coaching calls) just seemed to evaporate in slow motion.  Give Bruce Arians and his staff along with Tom Brady most of the credit for that.  But the Eagles did not help their own cause until it was far too late, and even then the Bucs had already taken their foot off the gas.

The defending Super Bowl champion Buccaneers (5-1) lost another cornerback when three-time All-Pro Richard Sherman left in the first quarter with a hamstring injury, but their depleted defense held on after Jalen Hurts rallied the Eagles from a 28-7 deficit.

“It’s tough to win on the road,” Brady said. “Obviously, we didn’t play our best so we have to get back to work … We got to get better.”

His best play came after Hurts’ second TD run and a 2-point conversion pulled Philadelphia within six points with 3:05 left in the fourth quarter.

Facing a third-and-7 from Philadelphia’s 45, Brady rolled away from pressure and threw a perfect pass to Antonio Brown for a 27-yard gain to extend the drive and the Bucs ran out the clock.

“It was a great route, hell of a throw as Tom got out of the pocket,” Buccaneers coach Bruce Arians said. ″Couple times this year he slipped out of the pocket to the right and made a big play down the field.”

Brady finished 34 of 42 for 297 yards and an interception. He insisted his thumb, which was taped, is fine.

The Eagles (2-4) are winless in three home games under rookie coach Nick Sirianni. They heard boos at halftime but fought back to make it close.

“We were bad in the first half. Put that one on me,” Sirianni said. “There’s no doubt our offense needs to be better to give ourselves a chance to win.”

Brady’s 2-yard TD pass to O.J. Howard gave the Buccaneers a 7-0 lead. The Eagles answered on Hurts’ 5-yard scoring pass to Zach Ertz. Brady then hit Brown for a 23-yard TD pass to make it 14-7.

After two straight three-and-out series, Brady led the Bucs on another scoring drive with Fournette running in from the 2 to extend the lead to 21-7. Tampa increased its lead to 28-7 when Fournette walked in from the 1 in the third quarter.

Fournette ran for 81 yards and caught six passes for 46 yards.

“Having that year under my belt makes a big difference understanding it,” said Fournette, who signed with Tampa Bay shortly before last season after he was cut by Jacksonville. “The sky’s the limit for me.”

Brady was 19 of 22 before missing three straight passes late in the second quarter, including a deep ball intercepted by Anthony Harris that ended his streak of 227 passes without a pick.

The Buccaneers were already missing cornerbacks Carlton Davis and Sean Murphy-Bunting and safety Antoine Winfield before Sherman went down on Philadelphia’s first drive. Sherman was quickly ruled out. Arians wasn’t certain about the severity of the injury.

With all the misplays that the Eagles ran on offense, their defense would have had to have been airtight and ground-secure to give the team any realistic chance.  Brady and Fournette quickly destroyed that false hope.  It turned into a “no contest” clock game in the second half as far as the Bucs were concerned.

Tim McManus at ESPN blamed the playcalling on offense, although there were some open receivers whom Hurts just completely missed on a few key throws:

“Sirianni continues to ask too much of quarterback Jalen Hurts. Entering Week 6, Hurts had accounted for 87% of the Eagles’ offense by yardage, the highest of any team in the NFL. It was the same story against Tampa.  Eagles running backs received just one carry in the first half and nine total for the game.

“Running against this Bucs team is no easy task. They entered with the No. 1 rush defense, allowing just 46 yards per game. Leaning on the pass against Tampa is a must, but this wasn’t a one-week occurrence.

“Without any balance, the offense becomes predictable, and it falls to Hurts to claw and throw and scramble his way out of trouble. He’s proven to be a fighter. Hurts found his footing late, just as he did on Sunday in a comeback win over the Carolina Panthers. Hurts rushed for a pair of touchdowns against the Bucs to pull Philadelphia (2-4) within six with around six minutes to play. He became the first Eagles player with a pass touchdown and multiple rush touchdowns in a game since Michael Vick on Nov. 15, 2010 at Washington.

“But he is not consistent enough of a passer yet to go blow-for-blow with Tom Brady. And seeing as this was just his 10th career start, he shouldn’t be put in a position to shoulder such a load. That’s on Sirianni.”