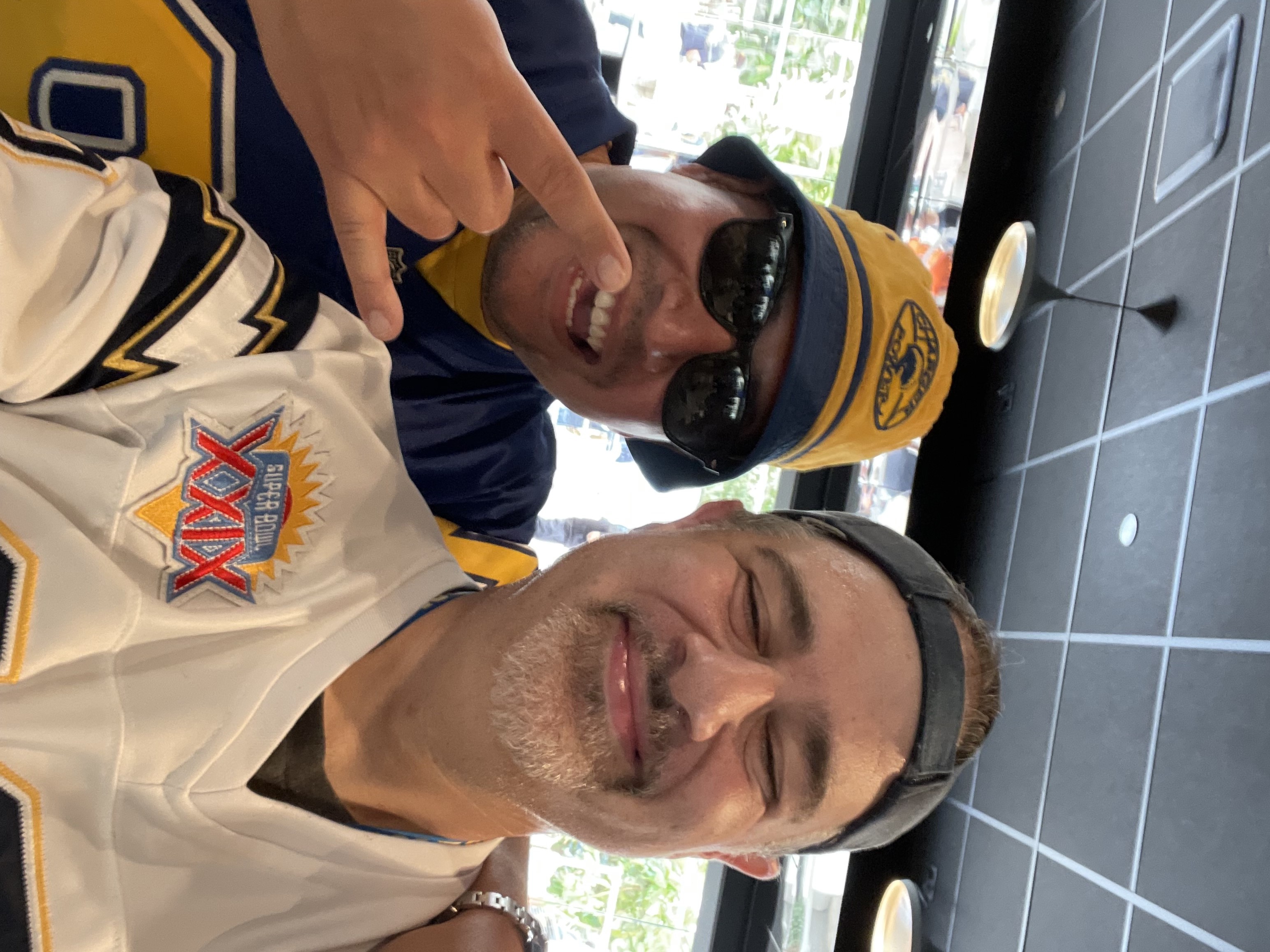 This is Victor. Thanks to Victor, I was able to be at the game on Sunday. That’s the short version. The long version, FAITHFUL READER, is a bit more involved. As I explained to a Browns fan at halftime, this is a role I chose–to be a Chargers fan. It is in Drunk On Sunday, that I saw Dan Fouts on TV and vowed to be a Chargers fan in 1979. That’s true. Since 1995, I have been writing a newsletter when there was no such thing as blog, called JUSTICE IS COMING.  Since then, many people have written back that they also love this team, are maddened by their inability to win a Super Bowl, and love many of the same songs, books, movies, and shows that I do.  I am thinking of Mike from Montana, DUKE KAHANAMOKU,Vladimir Favilukis ( I saw someone in an Olshansky jersey on Sunday, by the way, PJ Melnik………………….

Diego, Jon Mario from Miami, Kelly Hair, Mike Strange, Dennis Maloney, Colby (before the move), Scott (who went on to create Glorify the Past), Terry Moody, Shan Bone, Trish Keller, [email protected], Craig H, Damian Brennan, Daniel Chang, Derek Sandoz, Tom Twomey, Mike Armour, and Whit Watson.  If any of you didn’t want to be named in the OG Justice League, I apologize. It was also not listed in any order than my own crazy head could arrange. Some fans have gotten off the bus due to age, responsibility, and most notably the move to Los Angeles.

I have not been to a game in California since 2005. That’s a matter of public record. Victor is the latest person to find those shared interests through my writing. Having spent time with me, I think he would attest (as would anyone else I’ve met) that I am like the guy I describe in words. I hope I am more than my references and have battled that very problem in my own life.  I started my book around the same time I began writing about the Chargers. I used to send my Charger newsletter to the Bolt Backers edu news group via Eric Stangel.  Then Daniel Chang discovered my writing and it became a website.

But my book also came out after the passing of both my parents.  I think it’s clear how much I loved them and how much they shaped me.  I have also always identified with the Mexican people. I love tequila, old school Santana,

tacos (more Tex than Mex but I did spend that summer in Mexico in 98 so I know all about authentic cuisine), Cypress Hill and more.  More importantly, I identify with the values of family, fun, brotherhood, and using all of the above to navigate life’s ups and downs.  That’s as Jewish as Mexican, but not clearly as cool on the surface.  Anyway, Victor welcomed me into his family, and not just because of the Bolts. He, Frankie, and Danny joined me on a journey of three magical days in Los Angeles.  This story is dedicated to them, their loved ones, and anyone else who has been on the ride with us so far.

Also a shout out to my friend Dave, who appears in my book as “Rose.” 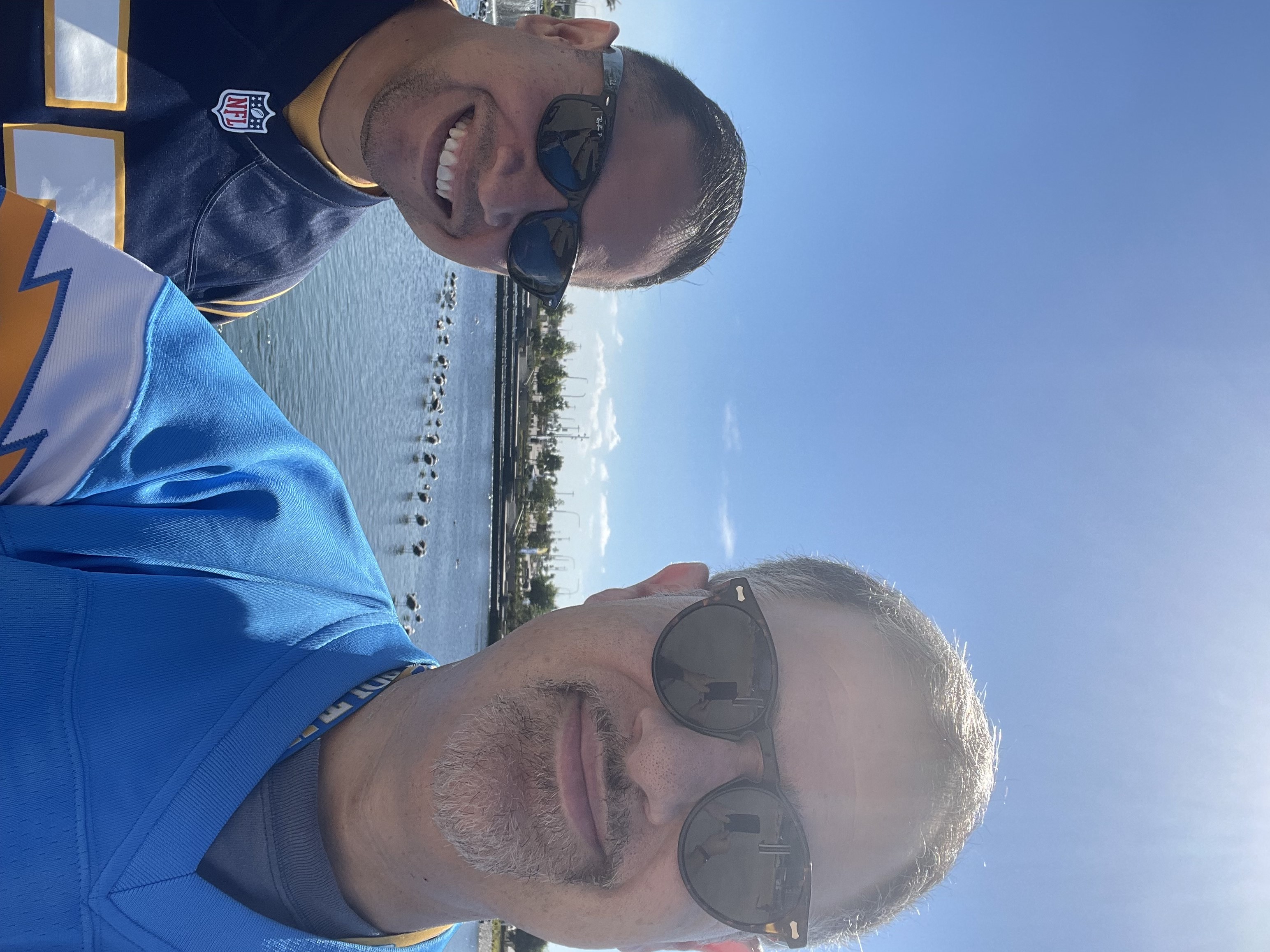 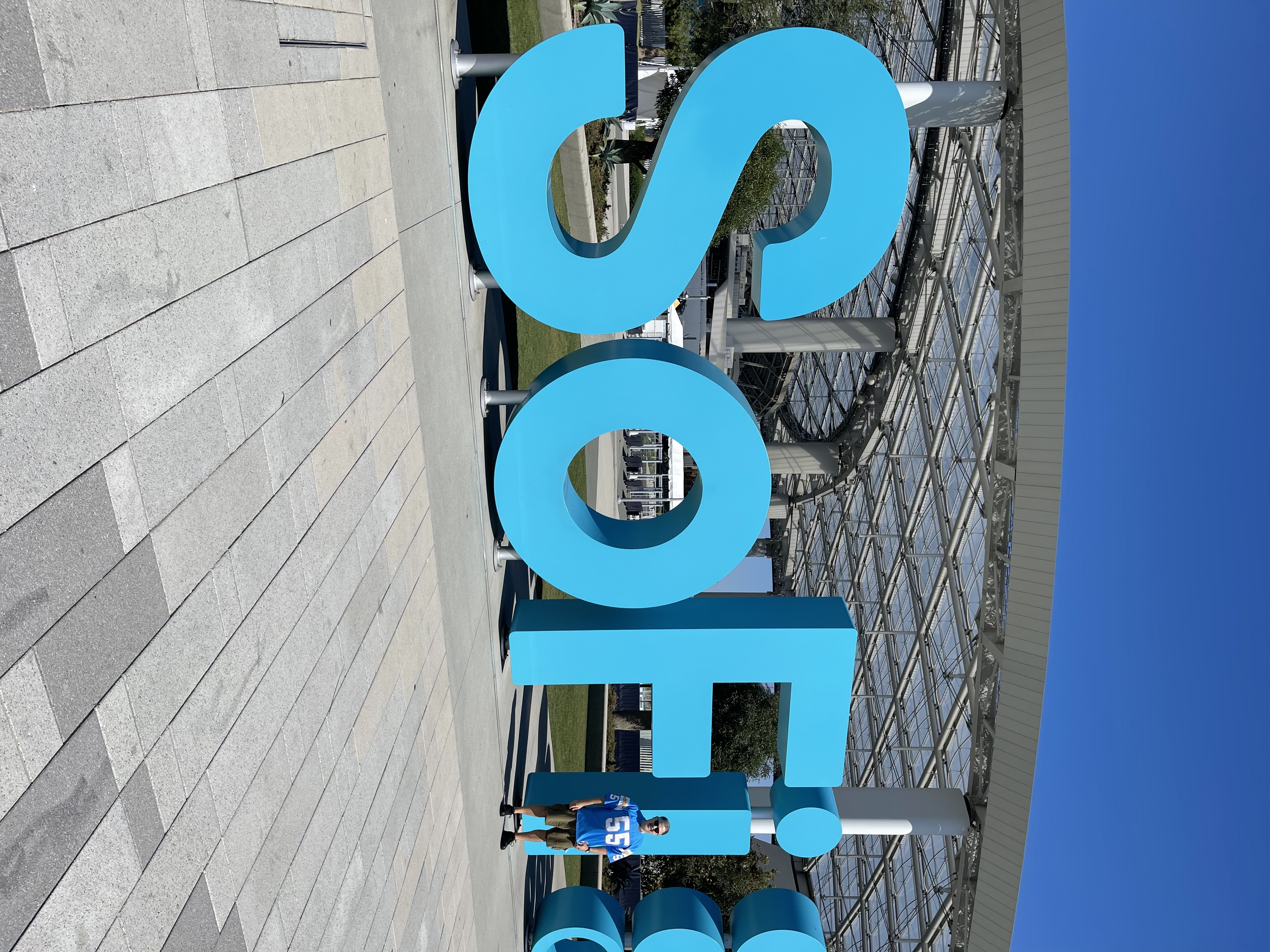 I know, it’s like Fletch going through his photos for Geena Davis. I don’t have shots of the Mormon Tabernacle choir. We went to the team store next, where I was like Rodney in Back to School.  Yes, I bought two pens. Then we found out we could take the tour of the stadium and field. 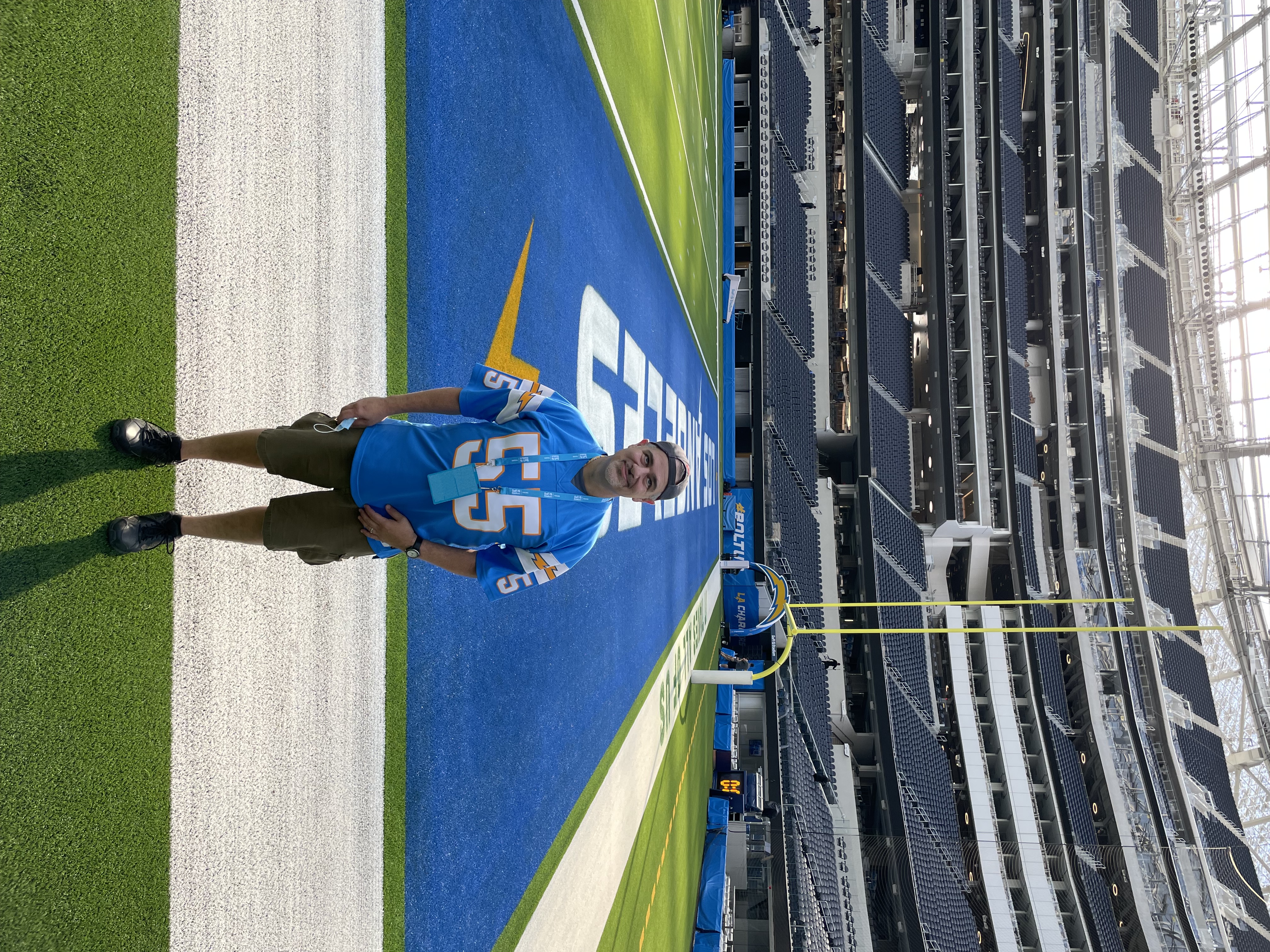 My friend Mike, who is “Money” in the book told me I could find myself banned from the stadium if I get too much access.  Don’t worry, I’m still in the sweet spot between accepted and established and outlaw. I’m too iconoclastic to be fully street legal.  Did I think about blessing the goalposts for our kicking game? Yes, and it didn’t work on Sunday. 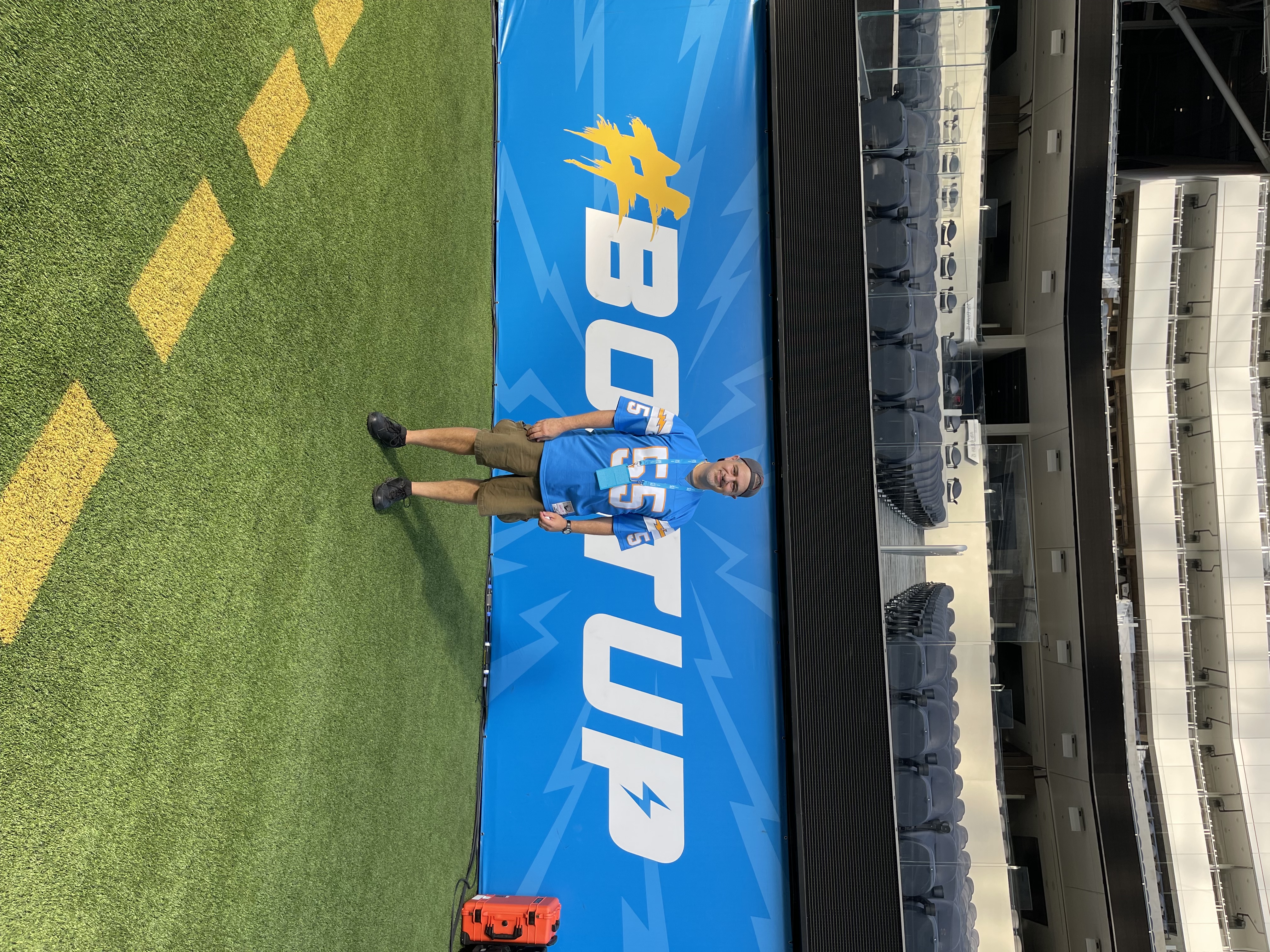 We also got to run out onto the field like the players.  I will post the video during the bye week.  I did put a Drunk On Sunday sticker in the stadium. 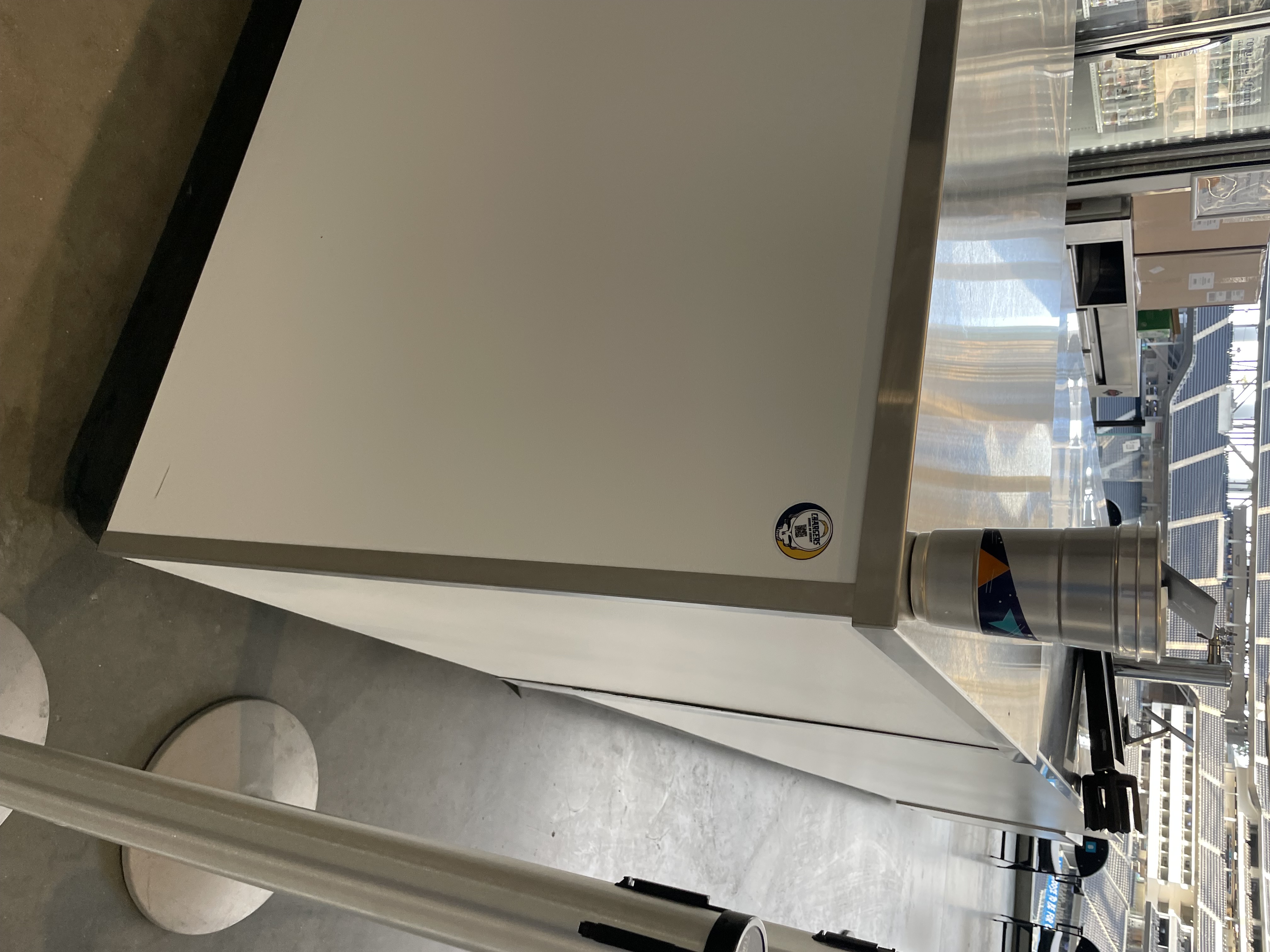 I resisted putting them everywhere.  The game itself was insane. The only thing I can compare it to was watching Game 6 of the 1986 World Series in my parents TV room. The only live events I can liken it to is the AFC Championship in Pittsburgh, which I attended with Fred Rosenberg. It’s Fred’s birthday today along with Bobby Fucking Weir, by the way. For the final play, I just sat in my seat dumbstruck.  Thunderstruck, more appropriately. 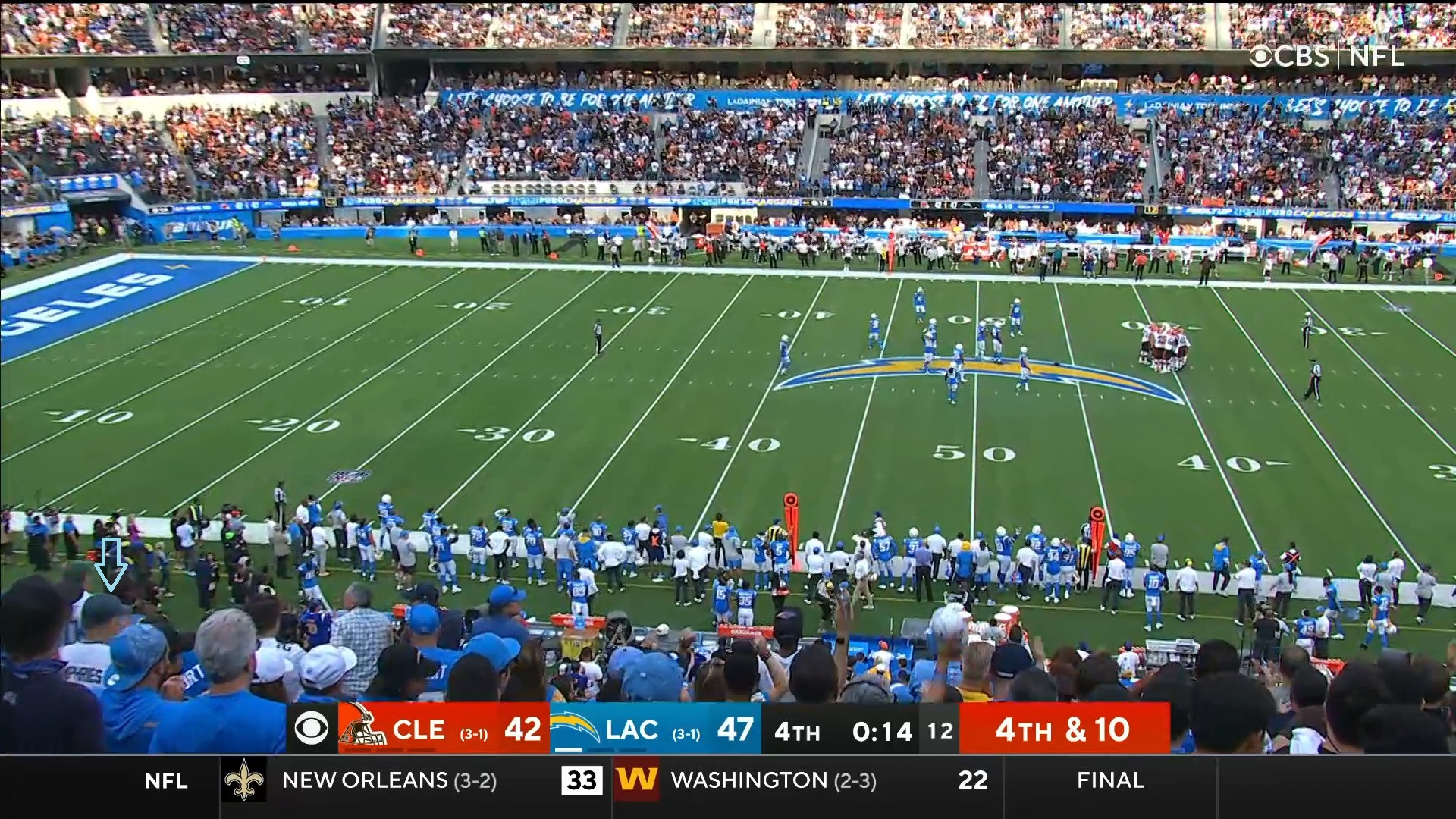 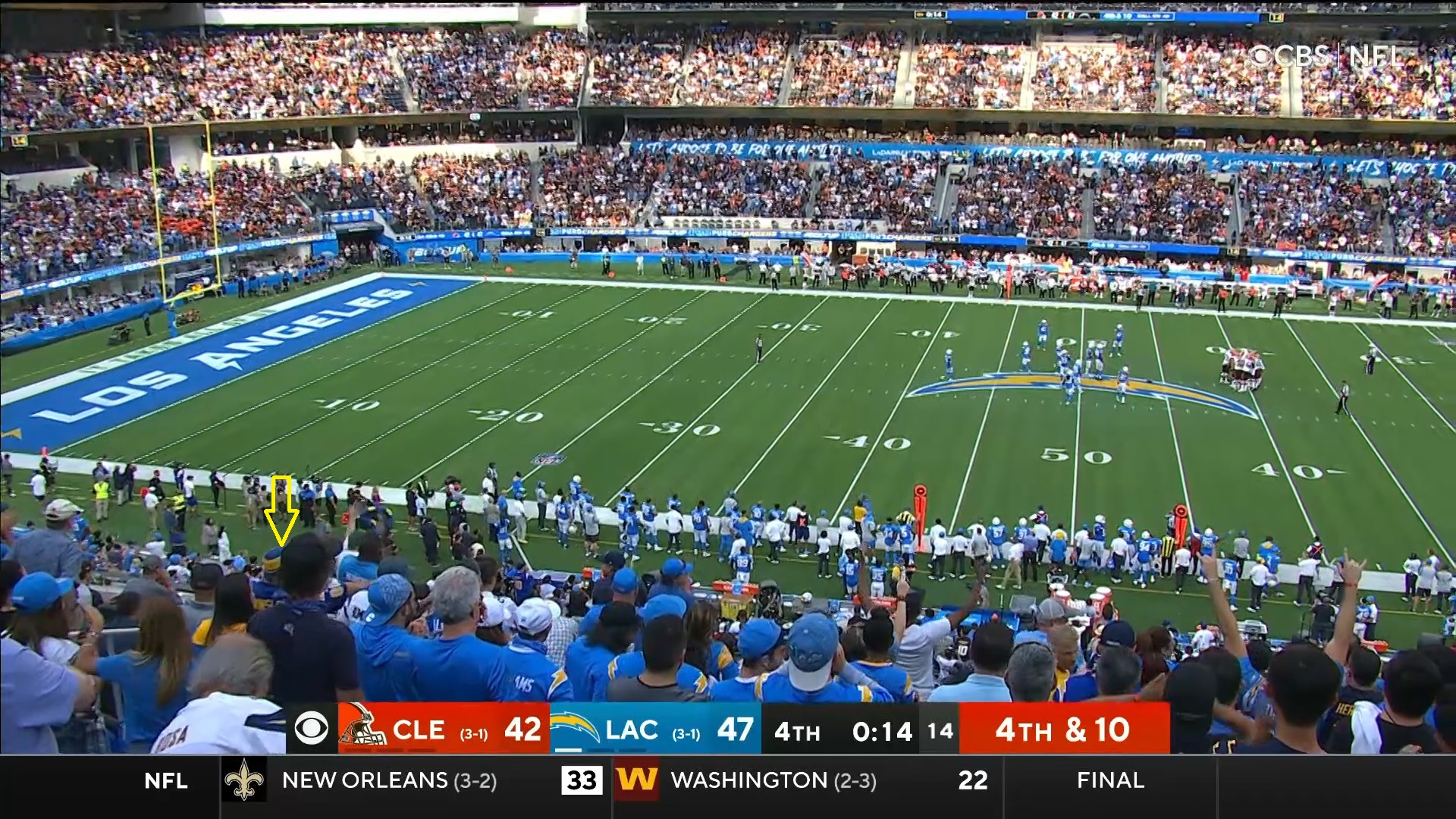 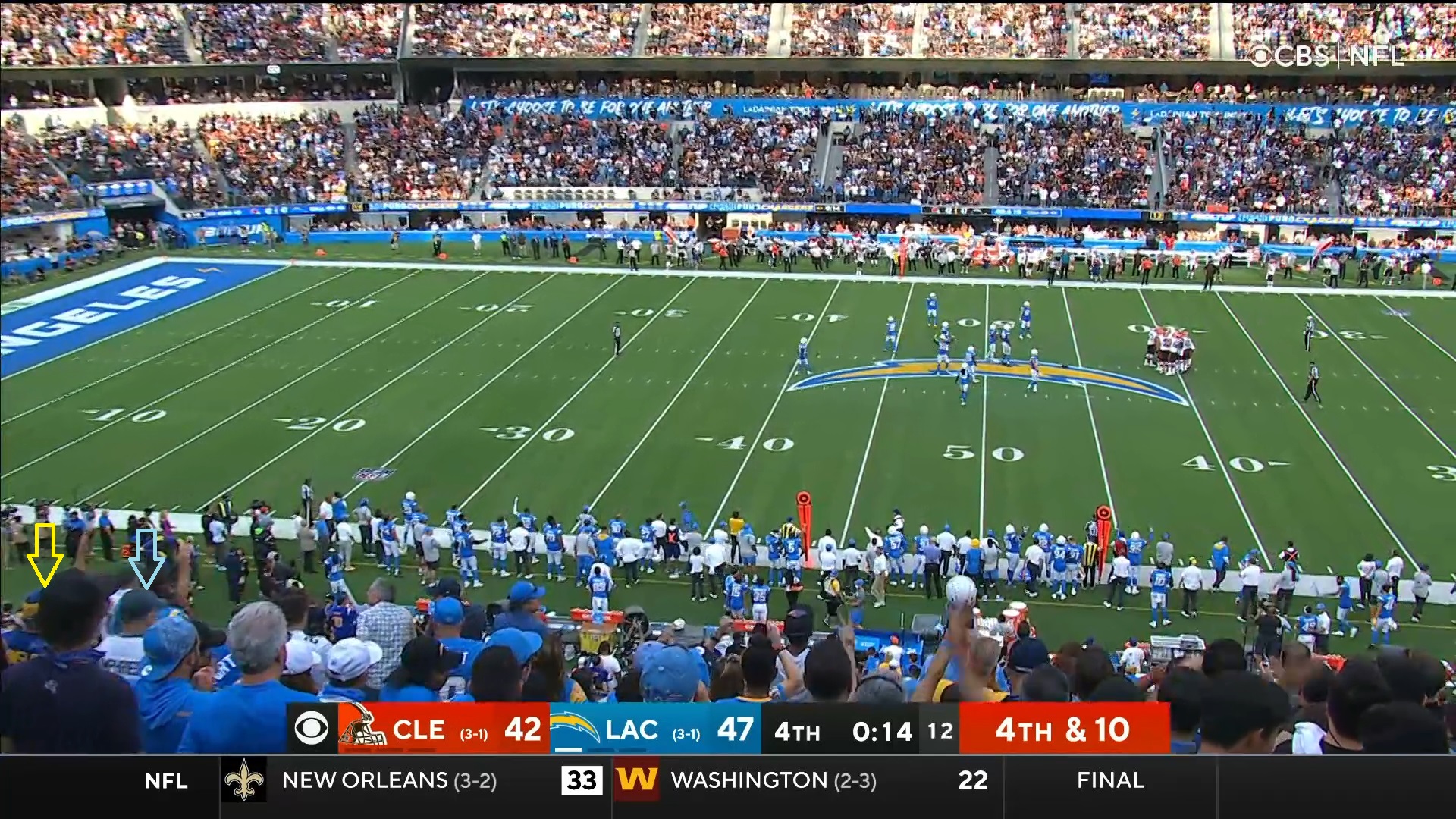 Here are my notes from rewatching the game after getting back to Long Island: Drue Tranquill played his ass off. He looked to get burned by Hicks, but that was probably a pass interference on him. Of course, people would say Mike Williams got the benefit in the biggest moment.  Tranquill, possible anti-vaxx stance and all, gave all he had and more on Sunday. The play that he hurt his pec on, he was desperately trying to tackle the guy in bounds.
Joey Bosa is probably playing on a sore ankle still.  Again, the magic of Staley is that these guys want to stay in and finish the job.  The roughing call on Bosa looked a little sketchy at best.  Thanks to Victor, our view was perfect on Sunday, but I had no idea about what was being replayed, etc.  The Occulus board at SoFi is insane.  I think they could use it to play Road House while the game is on, but that’s just me.  There was no replay of the Bosa call, so I have no idea if it was as bad as it seemed.  Baker Mayfield and his photo celebration…take a picture, it would have lasted longer than your lead. 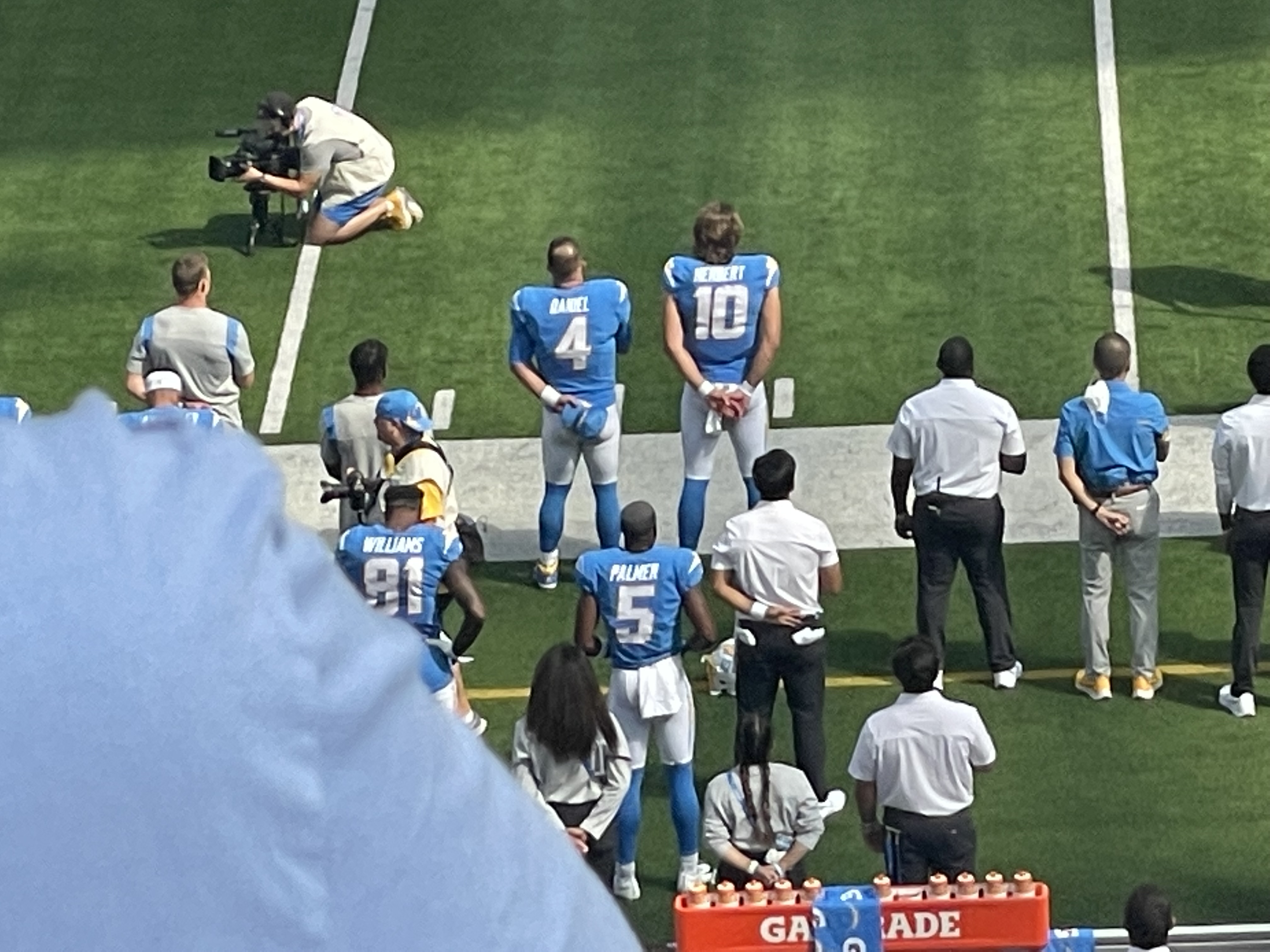 Ekeler’s fumble would have sunk this team with Lynn running it.  I didn’t know Lebron was in his box cheering for that.  He’s also a Cowboys, Yankees, Taco, and fan of anything that furthers the brand.  If he was a true Browns fan, I wouldn’t begrudge him. But if he gets Herbert on The Shop on HBO he’s not allowed to cut his hair or tell him he was pulling with him from the start.  There were so many moments in the game that should have been the end for this team. They gave up a touchdown after Ekeler’s fumble.  Ekeler was coming off his best game ever on Monday against the Raiders.  I don’t even have time to talk about how much I enjoy seeing them in the news for all the wrong reasons, by the way.
The Browns receive the kick in the second half, but it doesn’t look better.  Keenan Allen is dropping passes, but Herbert and Staley just go right back to him in the big spots.  That rollout throw and over the shoulder catch was insane, even if Sammy didn’t think so when I forced her to watch it last night.
Chargers had most dropped passes and fewest third quarter points in the NFL going into the game.  I did not know that, but it is more evidence that this game was crazy.  But we also had the most 10 plus play drives and most 4th quarter points I think.  This was our third 4th quarter comeback so far.  Dallas could have been 4, but it seems we are learning.
There were so many times this team could have quit.  When it seemed like Allen had maybe fumbled and a touchdown scored.  Herbert fucking decked a guy, by the way.
I can’t even begin to get into the kicking.  The second miss literally missed the net, as our former QB 3 Trent Green said on CBS.  When that happened I saw Herbert hyping up the guys on the bench.  Who does that? Doesn’t he know when the Chargers are cooked?  I guess not.  He told Dan Patrick that football is fun on Monday.  All I can say about Staley beyond the 4th down calls is that situational awareness was key.  When he goes for it, it’s not a gimmick like it is for Ron Rivera. He really believes we will get it and Herbert will deliver.  Vic’s boys, Frankie and Danny, were pounding their chest like Wooderson in Wolf of Wall Street all day.  They’ve bought in.  The Chargers played guttier, more composed, and smarter as the game went on.  When have we ever been able to say that about them? 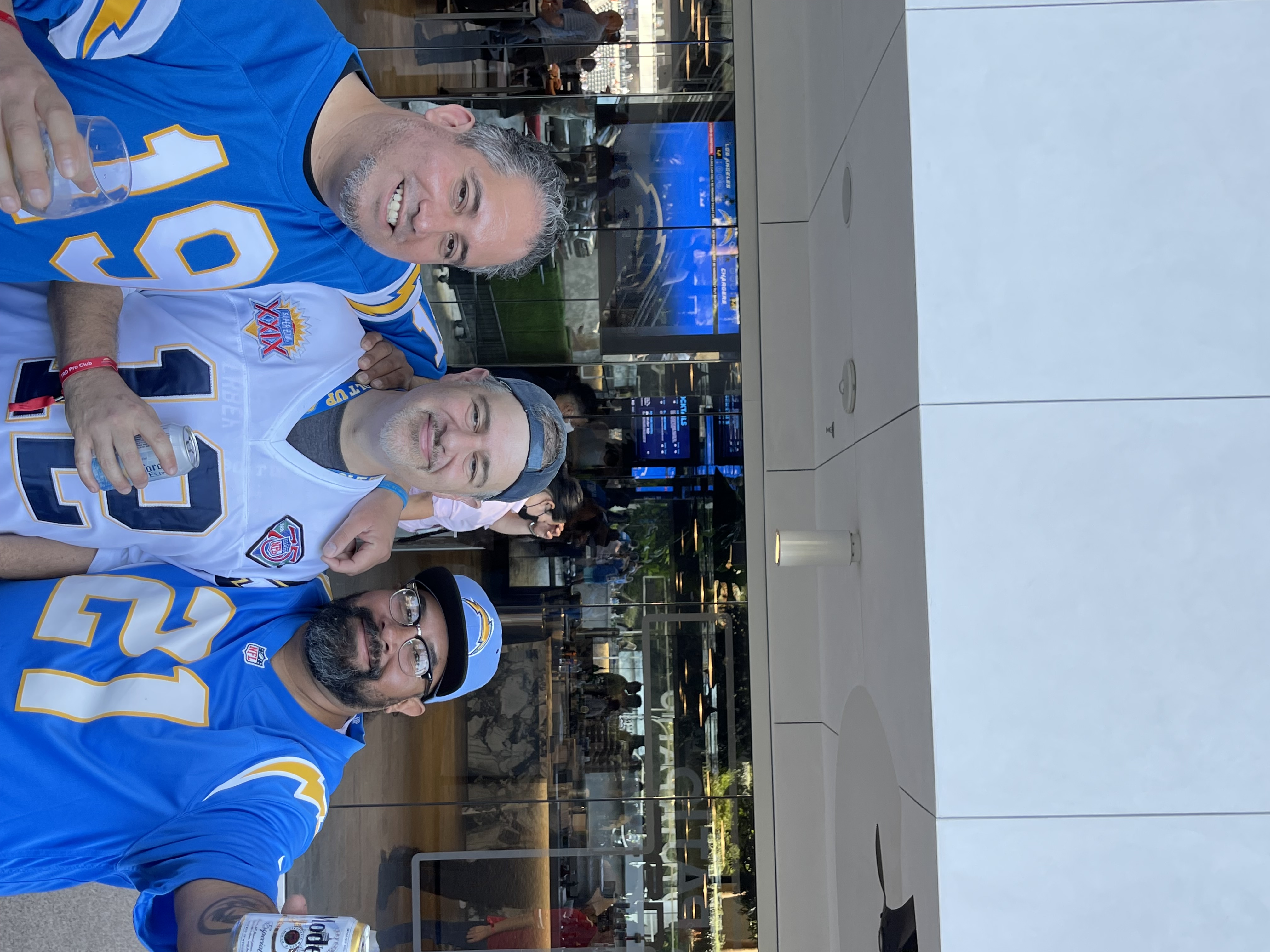 Frankie, pictured left, is the one who said that I was possibly inside his head and all about the deep cuts.  Here’s one more:

I know you love your Exile, even if it’s not on the bonus CD.  Danny, drummer and possible low-key culinary genius, figured out that the SoFi meat selection could be put into a bun with all the juice from the bottom of the tray to create a “Danwich.” Hashtag and patent forthcoming.

I have no metal cred, but here’s Gov’t Mule doing “I’m Eighteen.”  Look, I could talk all day about this team and my trip.  But they have a game tomorrow and no I am not going to Baltimore.  I’m going to let my daughter try to drive my car and get some wings with my son.

Williams may need to sit and Tranquill is out.  But Staley and Herbert have been cooking.  I don’t think we will win every week, but it seems like we can.  All that matters is that final game.  If we don’t lose it, we go where no Charger team has before…onto that fucking podium with the confetti falling.  I remember when Rangers fans had that one team who forgot how cursed they were and won it all.  The Eagles had one of those too.  The Chiefs, Saints, and Seahawks all won one.  We’re still on that list, The Tortured Twelve. It’s not a Tarantino movie, by the way.

That’s all for now, I have to move.

“Greatest Story Ever Told,” that’s a good name for a song. You can connect the dots.  Oh yeah, Urkel was at the game. Every time we made a stop I wanted “did I do that?” to be played. That’s where I got the second part of the title for this post.