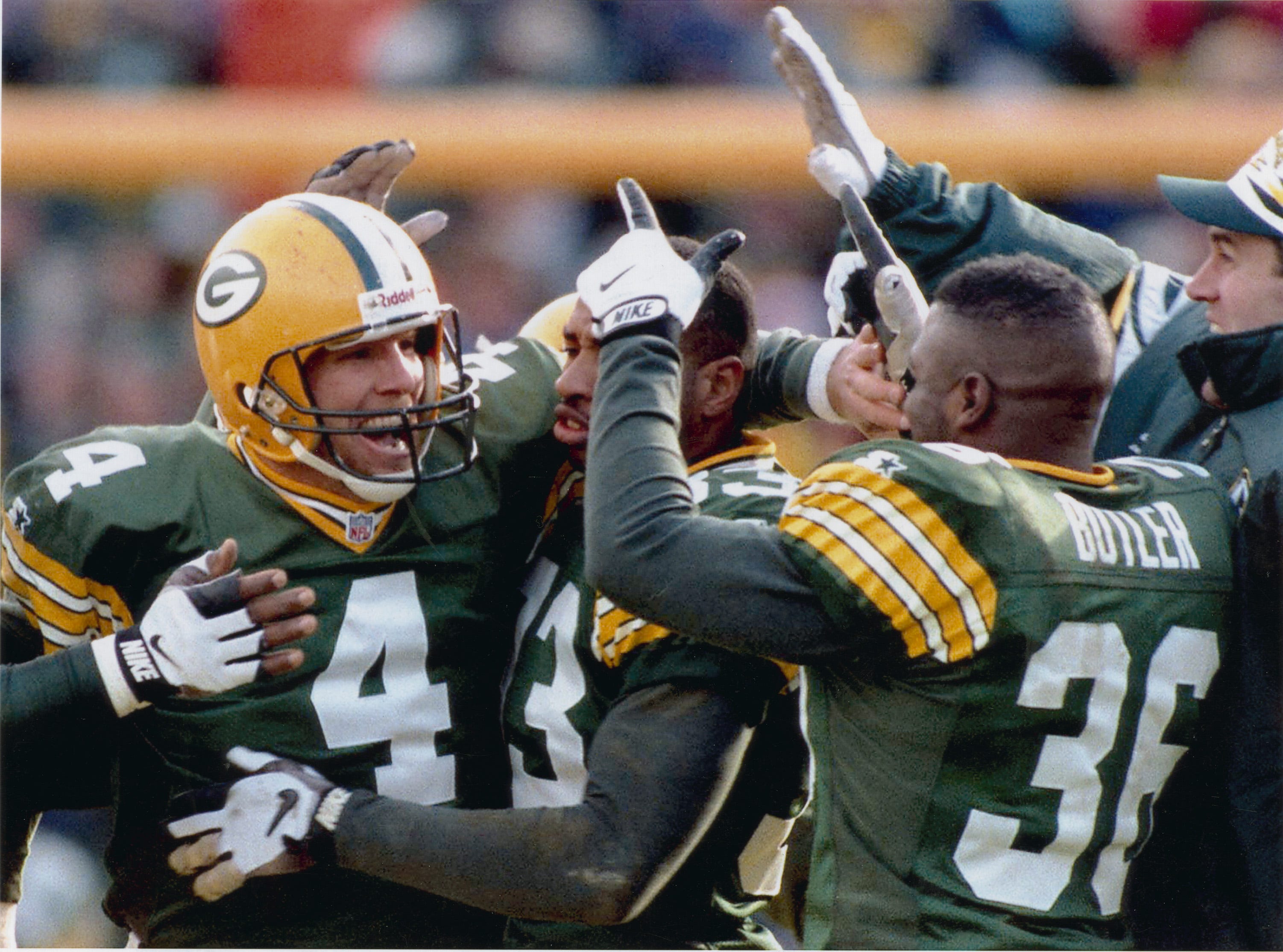 Things were not looking up for the Green Bay Packers heading into their 10th game of the 1995 season. The Pack was 5-4, one game behind the Chicago Bears in the battle for first place in the NFC Central. The NFL’s two oldest rivals were set to meet in a first place battle in Week 11 at Lambeau Field but the Packers were hurting as two of their best players were injured.

Favre had a consecutive starting streak of 54 games entering this contest while White had never missed a game in his 11-year career.

In the end, Favre and White both managed to play although White didn’t start but came into the game in the defense’s second series.

“I thought last night I might play. But we didn’t make the decision until this morning,” Favre said after the game. “It bothered me a little bit, but the tape job was almost like a cast. I was favoring it a little bit. I didn’t scramble on some plays where I probably could have.”

For a guy who wasn’t 100 percent, Favre played one heck of a football game. The native of Kiln, Mississippi, had one of the best games of his Hall of Fame career, completing 25-of-33 passes for 336 yards and five touchdowns to lead the Pack to a thrilling 35-28 win over the Bears.

How good was Favre? His quarterback rating for the game was 147.2.

“The things that I do well – improvise, make things happen – I’ve never really had to play a game where I just had to sit in there and play a control game,” Favre admitted. “Before the game, me and several players were saying that this was as nervous as we had been in years, probably dating back to college. It was such a big game, against the Bears, with first place up for grabs and I’d been hurt all week and didn’t know if I was going to come back and play. It was kind of a buildup process.”

The game was a see-saw affair. The Bears took the early lead on a touchdown pass from Erik Kramer to receiver Curtis Conway but Favre and the Packers responded when he found running back Edgar Bennett for a 17-yard touchdown pass later in the first quarter.

Then it was the Packers turn to take the lead as Favre connected with Robert Brooks on a 29-yard scoring pass. But the Bears answered back to tie it at 14-14 on a two-yard touchdown run by Rashaan Salaam on the first play of the second quarter.

The Packers regained the lead on a one-yard pass from Favre to Dorsey Levens but Kramer and the Bears tied the game just before halftime on a 46-yard touchdown pass to Conway.

Salaam’s second rushing touchdown of the game gave the Bears a 28-21 lead late in the third quarter but Favre responded right away. Antonio Freeman returned the ensuring kickoff 45 yards to the Chicago 44. On first down, Favre found Brooks again on a 44-yard scoring play and the game was tied 28-28.

Early in the fourth quarter, Favre threw his fifth touchdown pass of the game capping an eight-play, 69-yard drive with a 16-yard touchdown pass to Bennett. During the drive, he found Brooks for two key passes, one for 15 yards to convert a 3rd-and-8 and another that gained 29 yards and got the Packers into the red zone.

The Bears tried to answer and Kramer marched Chicago down the field on a 17-play drive that got them from their own 20 to the Packers 22. On 4th-and-2, Kramer tried to find Ryan Wetnight in the end zone for the tying score but he was intercepted by safety LeRoy Butler just after the two minute warning.

The Packers went three-and-out and gave Chicago one last chance to tie the game. The Bears took over at their own 36 with 1:13 left on the clock. Three completions and a pair of penalties against the Packers got Chicago to the Packers 14. On first down, Kramer looked for Jeff Graham in the end zone but cornerback Doug Evans broke up the pass. Then he looked for Michael Timpson twice but both passes fell incomplete as time expired.

Butler finished the game with a sack and an interception while White and Sean Jones each had a half sack.

The win moved the Packers into a first place tie with Chicago as both teams had 6-4 records. The Packers went 5-1 down the stretch to win their first NFC Central Division title in a non-strike season since 1972. They also went to the NFC Championship Game for the first time since the Ice Bowl in 1967.

At the end of the season, Favre won his first of three straight NFL MVP awards.

After the game, a reporter asked Favre if this game would make him change his style and encourage him to stay in the pocket more often and to improvise less.

“I doubt it,” Favre said with a grin. He was certainly right about that.