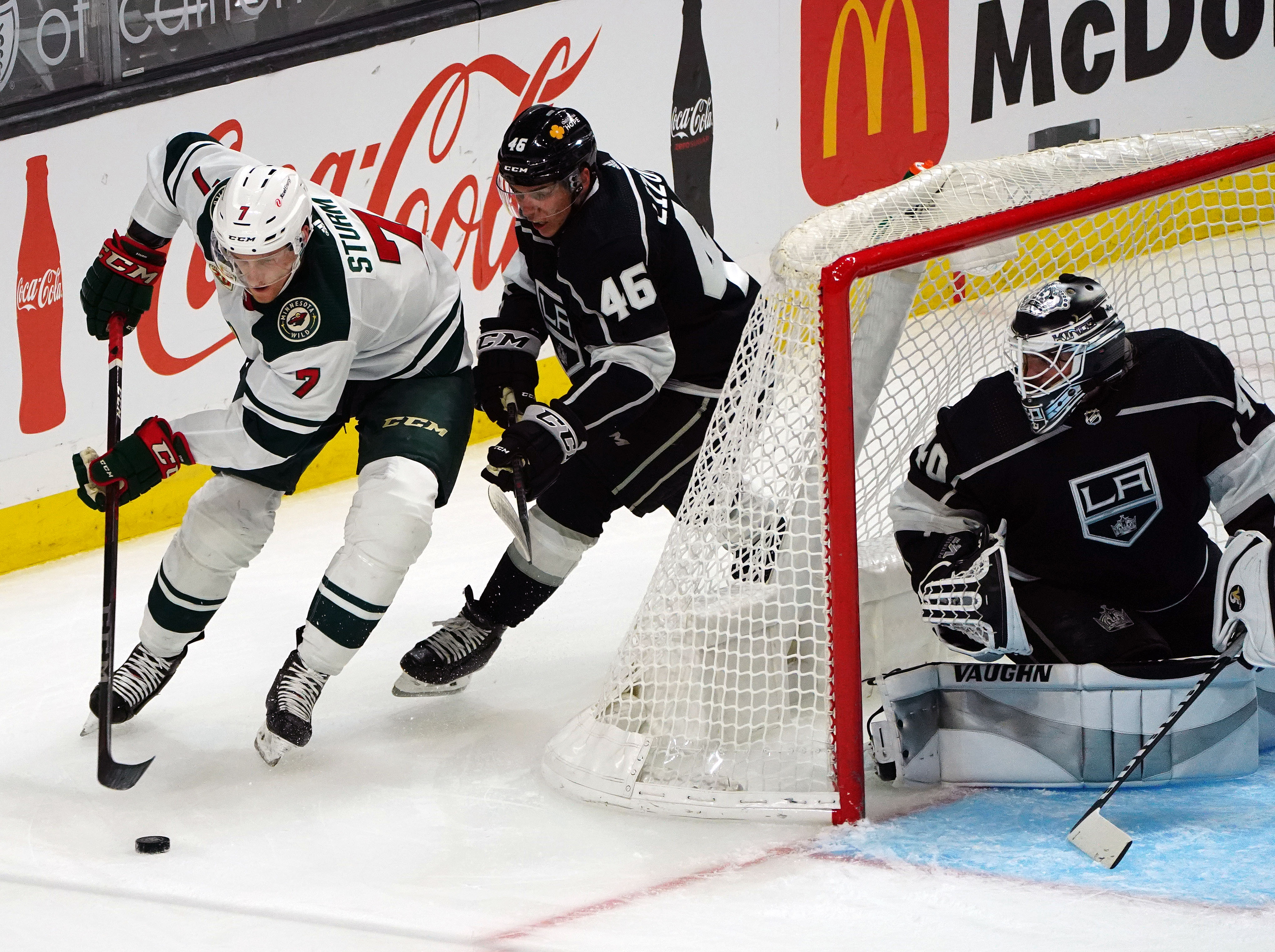 With Halloween but about two weeks ago, it’s a time for surprises. It can be pleasant surprises from your neighbor’s delightful decorations, including the occasional fright, to trouble-making teens who decide they want to toilet paper the neighborhood (hopefully those are the only highjinx they get up to), to deciding what candy to fill the bowl up for the kiddos that come to your door. For some people, Halloween is literally their favorite day/season of the year. There are people that go all out for the day, more so than they do for Christmas. One of my favorite channels on YouTube this time of year (and Christmas) belongs to a guy who is a professional lighting engineer. His light and music displays for those two holidays are everything. This year he went for the music of my high school days. Nothing quite like the surprise of Kurt Cobain in singing jack-o-lantern form.

Last night marked the official start of the 2021-22 Minnesota Wild season. For me, there were surprises, and not all of them were good. Let’s start with the good. I will admit, I was quite pleased with the first period. The team was getting shots on goal. Now mind you, it was a bit frustrating to see the number of shots generated, yet no goals came from it. I also appreciated the ability at times the Wild had at maintaining possession in the offensive zone. Let’s face it, those are two facets of the game that Minnesota has not always done well. Sure, it was the first period of the first game, but I’ll take “wins” when I can with this team. Of course, the second period felt way too much like second periods of the past. It didn’t help that Jakob Silfverberg tallied the first goal of the night just 17 seconds into the second period. I worried that considering the opponent, that Minnesota would just wither and die in front of our eyes. Surprisingly, that didn’t happen. It wasn’t a beautiful period of play, but they refused to give up. Just as Silfverberg scored early in the second period, Kevin Fiala would even up the score near the end of the same period. It was also nice, that where Anaheim scored on the power play, Minnesota did the same. Nice and symmetrical.

Another pleasant surprise from last night, is that Minnesota didn’t allow Anaheim to dominate with physicality. For almost the entirety of Minnesota’s history, the Ducks aren’t a good matchup. Whether it’s through size or simply intimidation, the Wild often crumble before our eyes. While physically the Ducks are still the stronger team, the Wild refused to tuck their tails between their legs and allow to be run roughshod over. This was very much a welcome change. Again, it was only the first game, and there’s (hopefully) 81 more to go, it was a step in the right direction. Now if they can continue this welcome surprise as the season gets longer and harder, I will definitely welcome the change.

Now, let’s talk about the unwelcome surprises. First off, as a household who pays a significant amount to Dish Network every month, who is still stuck in a dispute with Sinclair Broadcasting, it is absolutely ridiculous that I had to subscribe to ESPN+ simply to watch last night’s game. Heck, I’m surprised I wasn’t somehow subject to blackout, but at least that injustice didn’t happen. Why anyone thought we needed to go back to ESPN, is beyond me. I was happy with NBC Sports Network. Was it perfect? Absolutely not. However compared to what we were subjected to last night, I almost miss Pierre McGuire and Mike Milbury. I can’t believe I just said that. First off, ESPN is almost treating us like we no nothing about the game. The player tracker flags they insisted on, almost reminded me of the old FoxTraxx from back in the day. The flags were distracting, not helpful. Then there was the broadcast crew selected. First there was Linda Cohen, who many on Twitter thought she was broadcasting from a fast food drive-thru. And when her voice came on the air, it was much louder than the pair doing the play-by-play and analysis. And now we must talk about half of that broadcast crew. Doing play-by-play was Leah Hextal, grandaughter of Bryan Hextal and cousin to Ron Hextal. Every position in sports outside of playing, is all about who you know rather than what you know. I feel like last night was proof of that. I like to give my fellow women in sports the benefit of the doubt, but the longer I listened to her, I felt like she got the job simply to have a woman in the position. In fact, last night’s broadcast felt more like this:

In fact last night’s broadcast, between the quality of the broadcasters and the poor audio quality, almost made me wished I had just listened to the game. There was this one particular long, awkward minute or so in the third period that the only sound was from the ice and arena. I would argue that was the best minute of the game with the exception of Marcus Foligno’s game winner late in the third period. So much about the broadcast was bad, that I can’t even remember who the male member of the broadcast team was. And considering some of things that man said, he definitely reminded me of Alec Baldwin’s epic Saturday Night Live character Pete Schweddy.

Since tonight’s game is on Bally Sports, I will most likely be listening to the game. The Los Angeles Kings will definitely be an interesting opponent. Like Minnesota, they boast a 1-0 record. However, where the Wild only managed 2 goals in their win, the Kings managed 6 goals in their opening win. Not only was it six goals, it was six goals against the Vegas Golden Knights. The Kings may be very much a well-oiled machine this season. In that victory, they got a season opener hat-trick from Anze Kopitar, and well as goals from Drew Doughty, and Dustin Brown. It feels like a roster that hasn’t changed in forever. While they’re getting older, they’re definitely providing stability and a veteran presence. Hopefully for the Kings, their aging vets aren’t as controlling as certain veterans that are no longer with the Wild. While I didn’t like opening against Anaheim last night, I can’t say I’m looking forward to tonight’s game either. The Wild need to build on the pleasant surprises of last night. Los Angeles will definitely provide a challenge, and I just hope it’s a challenge that they are prepared to face.