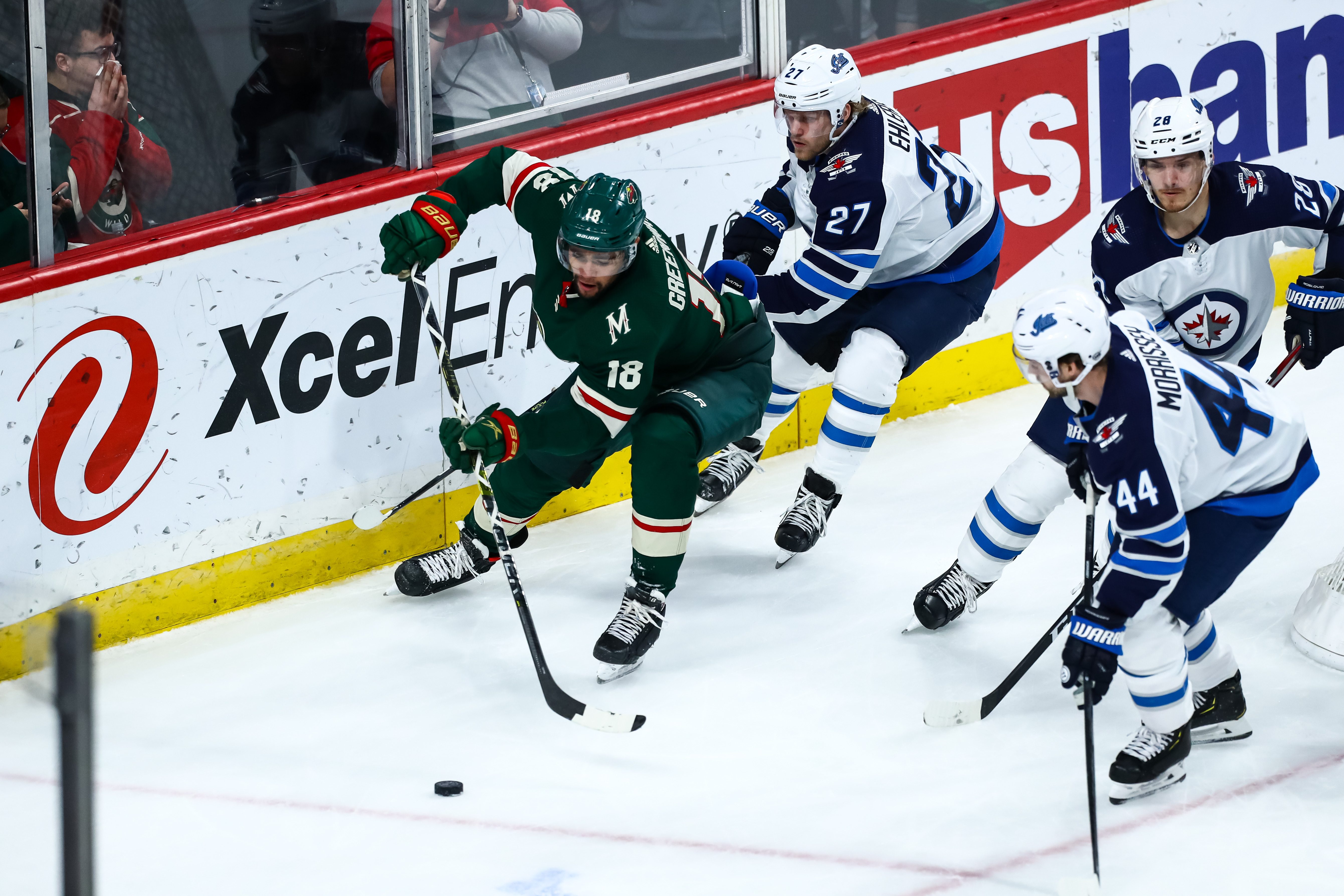 There is a saying about how it doesn’t matter how you start but its more important how you finish.  Right now, for the Minnesota Wild they might ask what if its good to both?  Minnesota started with two games in California to open the season, earning one-goal victories against the Ducks and Kings respectively.  Then the team returned to the friendly confines of Xcel Energy Center for its home opener to play against the Winnipeg Jets for the first time in two seasons due to the pandemic and re-aligned divisions.

The Jets jumped out to a fast lead on a goal by Kyle Connor.  Minnesota answered back with goal of their own by Mats Zuccarello a little over a minute later.  Winnipeg would get the go-ahead goal a few minutes later as Connor found the twine a second time on a power play tally.  Minnesota would respond late in the period on a power play of its own as Joel Eriksson Ek scored on a pretty wrap around goal to make it 2-2.

One thing that was clear throughout the game was the Jets were on a mission to try to intimidate Wild star winger Kirill Kaprizov.  Minnesota wasn’t taking too kindly at the Jets’ attempts to go after the young Russian and on the ensuing faceoff after Eriksson Ek’s game-tying goal Wild alternate captain Marcus Foligno dropped the gloves with Winnipeg’s Brendan Dillon.  It was here that Foligno added his own version of an exclamation point to an already exciting 1st period when he did Spartan style / Superman jump punch to start out the scrap against Dillon.  As you can see, the unconventional attack caught Dillon off guard literally and figuratively.  But Dillon would rally back with some good haymakers of his own, but Foligno kept battling and worked down low before landing a Mike Tyson’s Punch-Out-like uppercut that stunned him momentarily and Minnesota was able to gain control of the fight.

In the 2nd period, the Jets would strike early in the period to take back the lead at 3-2 on a goal by Josh Morrissey.  However the Wild kept battling and they’d get a bit of a fortunate bounce as Zuccarello managed to deflect a shot off a few defenders and by Connor Hellebuyck to make it 3-3 going into the 3rd.

The Jets again struck early in the 3rd period as Pierre-Luc Dubois put a shot up and over the shoulder of Cam Talbot.  Talbot’s struggles continued as Andrew Copp raced into the Wild zone and he too would find the window above the shoulder of the Minnesota netminder to give the Jets a 5-3 advantage.  The Wild looked a bit wayward the next few minutes as they struggled to generate offensive chances.  Minnesota would then crash the net as Marcus Foligno jammed a puck by Hellebuyck to cut the Jets’ lead to one.  The Wild would pull their goaltender with over 2 minutes left in search of the equalizer.  That move appeared to be premature as the Jets were able to work the puck out of their zone and Mark Scheifele buried an empty netter.  6-4 Jets, or was it?

The Wild would challenge the empty net goal on the basis the play was offsides and after further review that challenge was affirmed and Scheifele’s goal was waived off giving Minnesota a new lease on life being only down by one instead of two.  Minnesota would take full advantage of its extra-life and just a half minute later they’d cash in as Eriksson Ek nets the game-tying goal to make it 5-5 sending it to overtime.

In overtime, it was a back and forth affair as Talbot came up big on stops on Kyle Connor and Logan Stanley.  When a team commits to the attack in overtime, if you fail you are vulnerable for an odd-man rush the other way.  So when Talbot made the big save on Stanley shot and the Wild quickly countered with a 3-on-1 the other way before the puck ended up on the stick of Kirill Kaprizov who made a perfect pass to Eriksson Ek for the game winning tap in.  It also gave Eriksson Ek his first NHL hat trick.  6-5 Wild win!

This team has won 3 one-goal games so far to start the season.  It hasn’t always been pretty, but the team has shown good resilience and some increased grit and toughness.  The team stood up for itself and it was part of its leadership group stepping up to defend a teammate, something we almost never saw from the previous leadership troika.

The team now gets a few days off before it plays again on Saturday against Anaheim and Nashville on Sunday.  Hopefully that helps Talbot recharge and refocus after what was kind of a rough start this evening.  Defensively, the newcomers in Alex Goligoski, Dmitry Kulikov and Jon Merrill look like they are fitting in rather nicely.  The penalty kill could use a little work too.  But they at least have time to practice and work on those issues.

What were your thoughts on the Wild’s 1st three games of the 2021-22 NHL season?  Tell us on Twitter at @CreaseAndAssist! 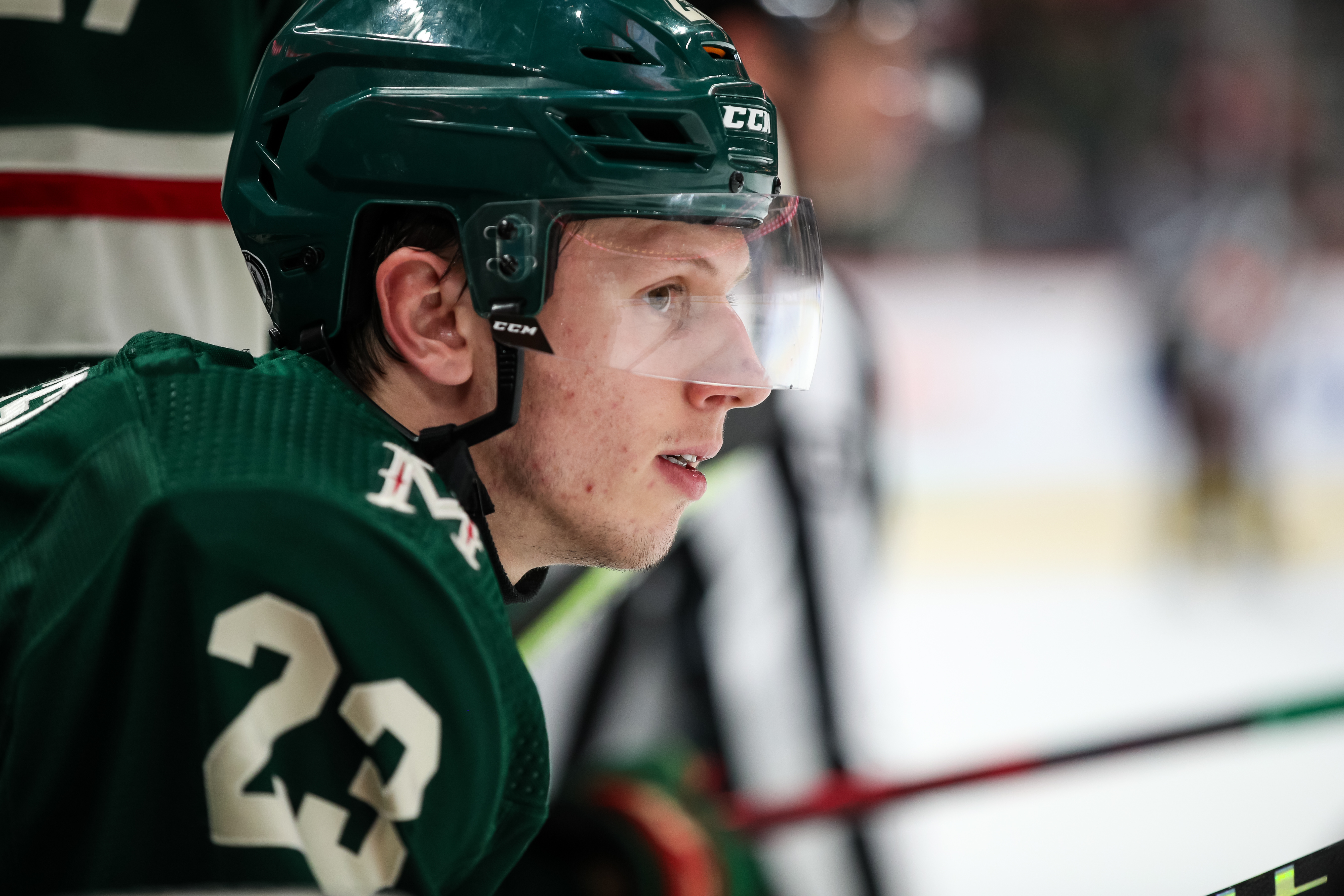 Some Wild fans lobbied hard for the team to keep youngsters Matt Boldy, Adam Beckman, Calen Addison and Marco Rossi in the lineup.  Perhaps it was to have that Kirill Kaprizov-feeling of bringing on another young ace or because it was just the envy of seeing other clubs around the league use recently drafted players and having some success.  Despite hints from Wild management that opportunities to ‘earn a spot’ were there, the team sent down the talented group of young players to its American Hockey League affiliate to be given more playing time and opportunity as well continue to learn the ropes of the professional game.

Matt Boldy’s late pre-season ankle fracture put him on the shelf, but for the other three it meant they were going to be featured prominently in the Iowa Wild lineup.  Rossi and Beckman played on the 2nd line while Addison was a part of the team’s 3rd pairing.  The Wild traveled to Austin for a 2-game series against Texas, a place where Iowa has enjoyed little success.

Iowa prevailed in game one, where they outworked the Texas Stars and prevailed with a 2-0 win on goals from veterans Kyle Rau and an empty netter from Connor Dewar.  Andrew Hammond stopped all 27 shots he faced and it was a solid opening road effort all around.  Iowa’s more veteran-laden defense corps shut the Stars down out.  Kevin Czuczman and Joe Lizotte had particularly strong games at both ends of the ice.

The rematch came on Sunday, with Iowa Wild starting Dereck Baribeau instead of ‘the Hamburglar.’  Baribeau had a decent game, stopping 28 shots but unfortunately the Wild couldn’t solve former Lakeville North star Jake Oettinger who manned the crease for Texas.

‘Iowa Wild killer’ Riley Damiani potted two power play goals for the Stars and that was more than enough.  The former Kitchener Ranger always seemed to have big games against the Iowa Wild last season.  Iowa peppered Oettinger with 44 shots on goal so it wasn’t for a lack of effort.  Shortly after Damiani’s 1st power play goal, the Wild responded back with their lone goal of the night as Marco Rossi netted his first goal of the season on a sneaky wrap around you can see in the embedded video below.

The Iowa Wild would lose 3-1 that night.  Iowa’s next game is Friday at home against the Rockford Ice Hogs with puck drop set for 7:00PM CDT.

LW – Caedan Bankier (Kamloops, WHL) ~ The lanky power forward is off to a fast start and that continued on Saturday where he had a goal on 2 shots but went an ugly 2-for-8 on his draws in the Blazers’ 5-0 route of Vancovuer.  Bankier has 6 goals, 9 points and is a +3 in 6 games this season.

RW – Josh Pillar (Kamloops, WHL) ~ The pesky winger is also having a good season so far and he had 2 assists on 2 shots in Kamloops victory over the Giants on Saturday.  Pillar has 3 goals, 9 points, 11 PIM’s and s a +4 in 6 games.

D – Carson Lambos (Winnipeg, WHL) ~ The two-way defenseman has been putting up points early in the season as he had 2 helpers on 4 shots on Saturday in a 6-3 win over Regina.  However on Sunday he was held scoreless but finished the game with 2 shots on goal and finished the night with a +1 in Winnipeg’s 3-1 win over Swift Current.  Lambos has a goal, 8 points, 15 PIM’s and is a +5 in 7 games.

D – Ryan O’Rourke (Sault Ste. Marie, OHL) ~ The Greyhounds captain was held scoreless on Saturday despite having 5 shots on goal in Sault Ste. Marie’s 5-3 loss to Owen Sound.  The Wild decided to send him back to major junior despite having played all of last season in Iowa with the hopes he’d benefit from being used in all situations there.  So far it has been a modest start to the season as he has just a lone assist and 5 PIM’s in 3 games played.

LW – Marat Khusnutdinov (SKA St. Petersburg, KHL) ~ The speedy forward has seen his ice time reduced somewhat with SKA as he only logged 13:54 in 21 shifts in Sunday’s 4-3 shootout loss to Barys Astana.  He did score in the shootout but it wasn’t enough to give SKA St. Petersburg the win.  Khusnutdinov has 3 goals, 8 points, 6 PIM’s and is a +5 in 18 games.

C – Matvey Guskov (CSKA Moscow, KHL) ~ The lanky forward has shown an ability to get involved physically as bottom 6 forward logging a little under 13 minutes per game.  He had an assist on 1 shot on goal in CSKA’s 4-3 loss to Spartak on Monday.  Guskov has 2 goals, 5 points, 5 PIM’s and is a -3 in 13 games this season.

C – Sam Hentges (St. Cloud State, NCHC) ~ The senior forward had goal in Saturday’s tough loss to in-state rival Minnesota.  It was his first of the season and he has a goal and 3 points, 4 PIM’s and is a +1 in 4 games this season.

LW – Nikita Nesterenko (Boston College, H-East) ~ The Brooklyn, New York-native had an assist in the Eagles’ 6-2 loss to Bentley Saturday night.  The sophomore has 2 helpers, 4 PIM’s and is a +2 in 4 games.

D – Marshall Warren (Boston College, H-East) ~ The junior defenseman is off to a strong start this season.  He was scoreless in the Eagles’ 6-2 loss to Bentley and finished the evening with a -2 and 4 shots on goal.  Warren has 2 goals, 4 points, and is a +2 in 4 games.

RW – Pavel Novak (Kelowna, WHL) ~ The skilled winger had two helpers on 2 shots in the Rockets’ 4-2 win over Kamloops on Friday and finished the evening with a +1 rating.  Novak has 2 goals, 6 points, 2 PIM’s in 3 games.

D – Filip Johansson (Frolunda, SHL) ~ There are signs Johansson might be a late bloomer as he is steadily earning more ice time and opportunity in Sweden’s top league.  Johansson recently scored his first goal of the SHL season and so far has a 4 points in 9 games.