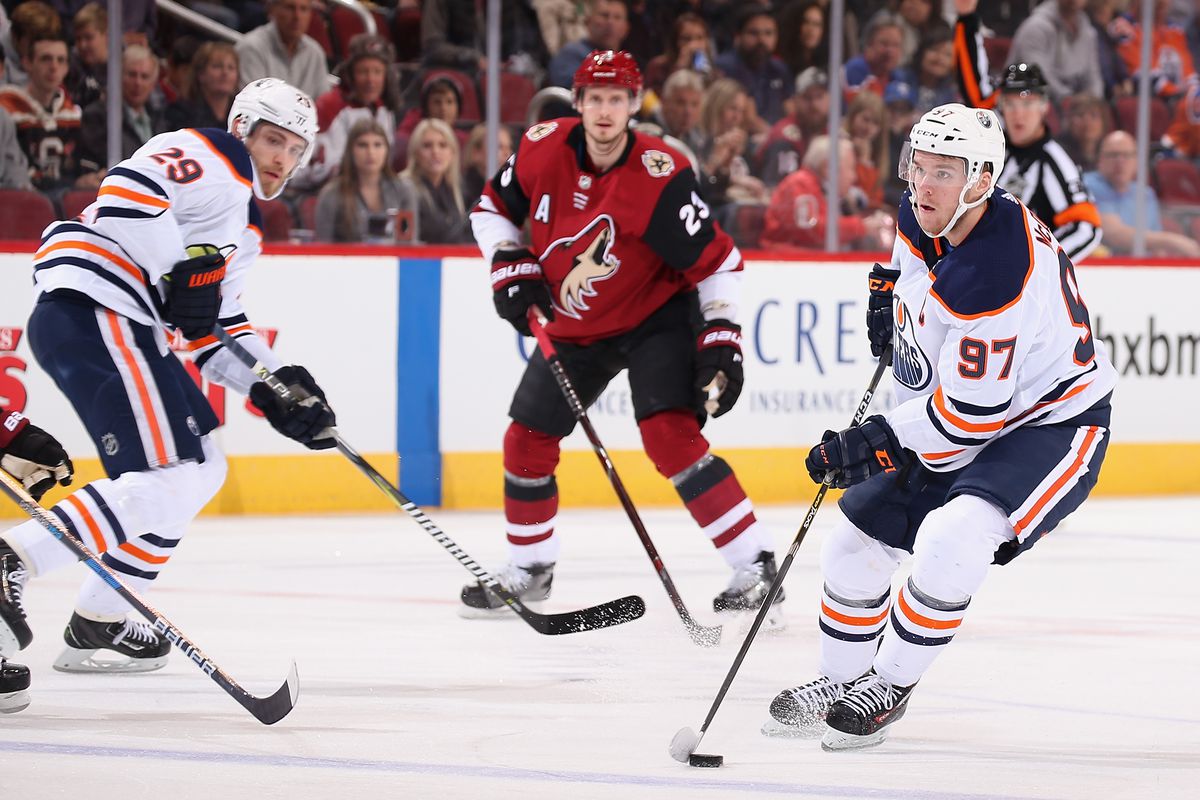 The Edmonton Oilers are coming off a frustrating yet entertaining game against the Ducks. They narrowly outshot the Ducks (37-36) however shot distribution heavily favoured the Oilers, with the bulk of their shots coming from the slot. Whereas Anaheim’s shots were distributed more evenly throughout the zone. This is not kudos to Edmonton’s defensive game as they gave up numerous high danger chances and appeared lost structurally at times. This is however kudos to Edmonton’s offensive attack as there is a clear directive of attacking from the slot regardless of whether its 5v5 or on a powerplay. The 3rd line, of Foegele, Kassian and Ryan, highlight this commitment to driving the slot. This was by no means a pretty game but Edmonton came away with the win, something they need to do against teams like Anaheim to keep pace with Vegas.

Now the Oilers head out on the road to meet, former division rival, the Arizona Coyotes. Edmonton currently sits undefeated at 3-0-0, while Arizona is winless at 0-2-1.

Karel Vejmelka gets the nod for the Coyotes, while Mikko Koskinen gets the start for the Oilers. And if you are asking yourself who Karel Vejmelka is don’t feel shame I too was at a loss when his name came up.

Edmonton #1: Continue the relentless forecheck. This will force Arizona to take penalties and put Edmonton’s lethal powerplay to work. The Oilers had 6 powerplay opportunities against the Ducks and scored on 2. For the season they are currently at scoring on 41% of their chances.

Edmonton #2: Play better defensively, to this point there has been far too much unstructured play from the Oilers defensive unit. They’ve been able to outscore their mistakes however that is not a sustainable model. The promotion for Evan Bouchard provided some stability to the top pair while Tyson Barrie struggles. Keith and Ceci have been just alright, that being said I would like to see them leaned on more in order lessen the minutes on Nurse.

Arizona #1: Absolutely stay outta the box. The Oilers PP can feast on teams and they’ve been doing so for the past 3 seasons. In order for Arizona to have success against Edmonton they will need to limit their exposure to deadly weapons. If the Coyotes can keep Edmonton off the board 5v4, they’ll have a chance to not just win tonight.

Edmonton: Mikko Koskinen is getting his first start of the season. How will he fair against the first shot he sees? He looked solid when he came in to relieve the injured Mike Smith. As a player looking to rebound on a less than impressive 2020/2021 season watch to see Koskinen rise to the occasion with smith out or we he falter? Expect big things against an Arizona team that has just 7 goals in 3 games this season and has a 20% power play.

Arizona: Karel Vejmelka is getting his second career start, third appearance, and it is safe to say Arizona’s chances of winning tonight’s game rest heavily on the players shoulders. Coming into tonight he has a save percentage of .956 and a goals against average of 1.35.

McDavid, Puljujarvi and Draisaitl have been clicking offensively, as has the 3rd line of Foegele, Kassian and Ryan. The 2nd line of Nugent Hopkins, Hyman and Yamamoto had a great 1st game however their play has dipped the past 2 games, and tonight should be a great opportunity to get the mojo going again. Expect Yamamoto to have a short leash after the other nights demotion. As for the 4th line it would be nice to see them on a more frequent basis in tonight’s game with Vegas tomorrow on the back to back. A balanced ice time dispersal could be all the difference tomorrow night. That being said Edmonton can’t sleep on Arizona, far too many times throughout the decade of darkness in Edmonton did the Oilers leave pointless when playing lack luster Coyote teams.