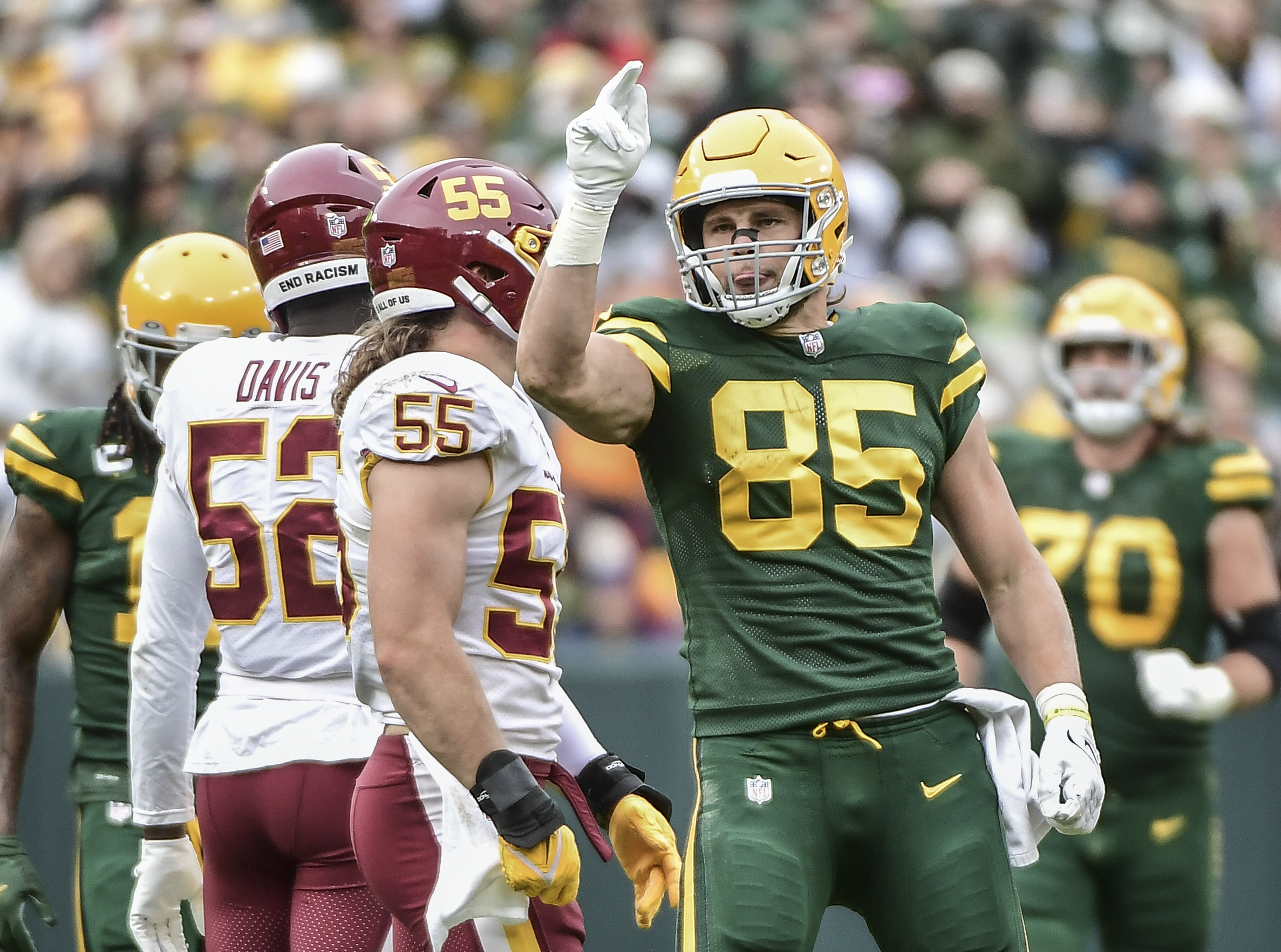 The Green Bay Packers got three touchdown passes from Aaron Rodgers and strong defense in the red zone to defeat the Washington Football Team 24-10.

It was the sixth straight win for the Packers who improved their record on the season to 6-1. The Packers are alone in first place in the NFC North, 2.5 games ahead of the Vikings who had their bye week.

The Packers have a short week now before heading west to face the Arizona Cardinals on Thursday night.

Here are 10 things we learned from the Packers victory over Washington:

Aaron Rodgers was very effective all day. The reigning league MVP finished the game by completing 27-of-35 passes for 274 yards and three touchdowns. That gave him a quarterback rating of 127.6.

Rodgers did a good job of spreading the ball around as seven different players caught passes for the Packers.

He also kept his cool as Washington pressured him throughout the game but ended the contest with just three sacks all of which came early in the contest.

Overall, Rodgers did exactly what he needed to do and the Packers earned the victory. Rodgers now has 15 touchdowns and three interceptions on the season and is on pace for 36 touchdowns and 4,153 yards over a 17-game season.

It wasn’t always pretty, but the Packers finally got some stops inside the red zone this week and it was the difference in the game.

Before this contest, the Packers had allowed touchdowns in all 15 opponents trips inside the red zone. They finally got a stop early in the third quarter when Washington quarterback Taylor Heinicke gave himself up at the one-yard line on a third down when he could have easily walked into the end zone. Then on fourth down, De’Vondre Campbell forced Heinicke to fumble and although the quarterback recovered the football, he was stopped short of the end zone.

Washington had two more opportunities in the red zone in this game and both times the Packers stopped them. The next time, the drive stalled at the Green Bay three when the defense turned it over on downs. Then, Chandon Sullivan intercepted Heinicke in the end zone to end the third consecutive Washington trip into the red zone.

This was a big step forward for the defense and hopefully something that will boost their confidence going forward. It was also the difference in this game.

The Packers were without both Za’Darius Smith, who remains on the IR with a back injury, and Preston Smith, who missed a game for the first time in his NFL career with an oblique injury.

That left only one member of the Packers top three pass rushers in the lineup and Rashan Gary answered the call. The former Michigan star finished the game with two sacks and four quarterback hits and finished second on the team with seven total tackles.

On one of his sacks, Gary stripped the ball from Heinicke and Dean Lowry pounced on the loose ball to give the Packers the ball at the Washington 27. Three plays later, the Packers scored and extended their lead to 21-7.

Gary has been able to pressure opposing quarterbacks consistently in recent weeks and he stepped up against Washington when the team needed him most.

Inside linebacker De’Vondre Campbell continues to give the Packers strong play in the middle of the defense. Again, Campbell led the Packers in tackles with 13, nearly twice as much as his closest teammate. He also forced two fumbles in this game including the stop of Heinicke on 4th-and-goal at the one which was mentioned earlier.

Campbell understands the defense and is almost always in the right place at the right time to make plays.

One thing he does very well is stop opponents from gaining yards after they catch the ball. He allows very few yards after catch, something that has plagued the Green Bay defense in recent seasons.

Campbell has solidified the middle of the Packers defense and continues to be a key part of the defense’s improved play.

While Devante Adams led the team with six catches for 76 yards, he wasn’t the only receiver who had a good game for the Packers.

Allen Lazard finished the game with five catches for 60 yards and a touchdown. His scoring play came with 15 seconds left in the half and put the Packers ahead to stay. All five of Lazard’s catches came in this drive which was a real difference maker in this game.

Tonyan has struggled all season to match his 2020 production. Against Washington, he had four catches for 63 yards and scored a touchdown in the third quarter that put the Packers ahead 21-7.

The Packers don’t need players like Lazard and Tonyan to be dominant, but they do need them to step up and make contributions at key times during games. Both delivered at key moments against Washington.

The Washington Football Team never punted in this game. Despite this, the Packers defense did come up big several times on 4th down.

For the game, Washington had four chances to convert on fourth down and they were only successful once.

On third down, the defense held Washington to 4-for-11. This means the Green Bay defense answered the call on key plays when drives were at stake and the momentum of the game could change.

In a game the Packers were outgained 430-304 and allowed 25 first downs, the defense’s ability to make stops in key situations was a big factor in this win.

The Packers offense did not try to run the ball often in this game and preferred to challenge the Washington pass defense which was ranked much lower than their run defense.

For the entire game, the Packers ran 15 times for 57 yards for a 3.8-yard average. Two of those running plays were scrambles by Rodgers who gained 17 yards. Another 13 yards came on a jet sweep to Equanimeous St. Brown.

That means the three Packers running backs gained only 27 yards on 12 carries with nobody gaining more than 19 yards rushing.

Usually, when the Packers get away from the running game, the offense struggles but against this opponent and with these matchups, the strategy was effective enough to earn the win.

As mentioned previously, the Packers running game was not very productive. The offensive line also struggled against the Washington pass rush especially early in the game.

Rodgers was sacked three times in the game with all three coming in the first half. Rodgers was also hit six times, with Montez Sweat and Jonathan Allen recording three each.

The offensive line struggled to pick up stunts and to contain the pass rush, but the Packers adjusted and called more plays that involved quicker releases after their early problems and they were able to move the football enough to win the game.

Washington’s best offensive weapon was the running of their quarterback. Heinicke ran 10 times for 95 yards in the game including a 38-yard dash which saw the Packers caught in man-to-man coverage with nobody in the middle of the field to stop the scrambling signal caller.

The Packers have often struggled to stop mobile quarterbacks and will have their hands full with Kyler Murray on Thursday in Arizona.

The Packers continue to overcome the spate of injuries that come their way. They held Washington to 10 points despite playing without two of their top three pass rushers, both of their opening day starting cornerbacks, their Pro Bowl left tackle, their starting center and a starting wide receiver. They still won the game and were in control for most of it. That shows character.

Now the schedule gets tougher as the Packers travel to Arizona on a short week to face the undefeated Cardinals. We should get an even better idea of where this team is at in the coming weeks.