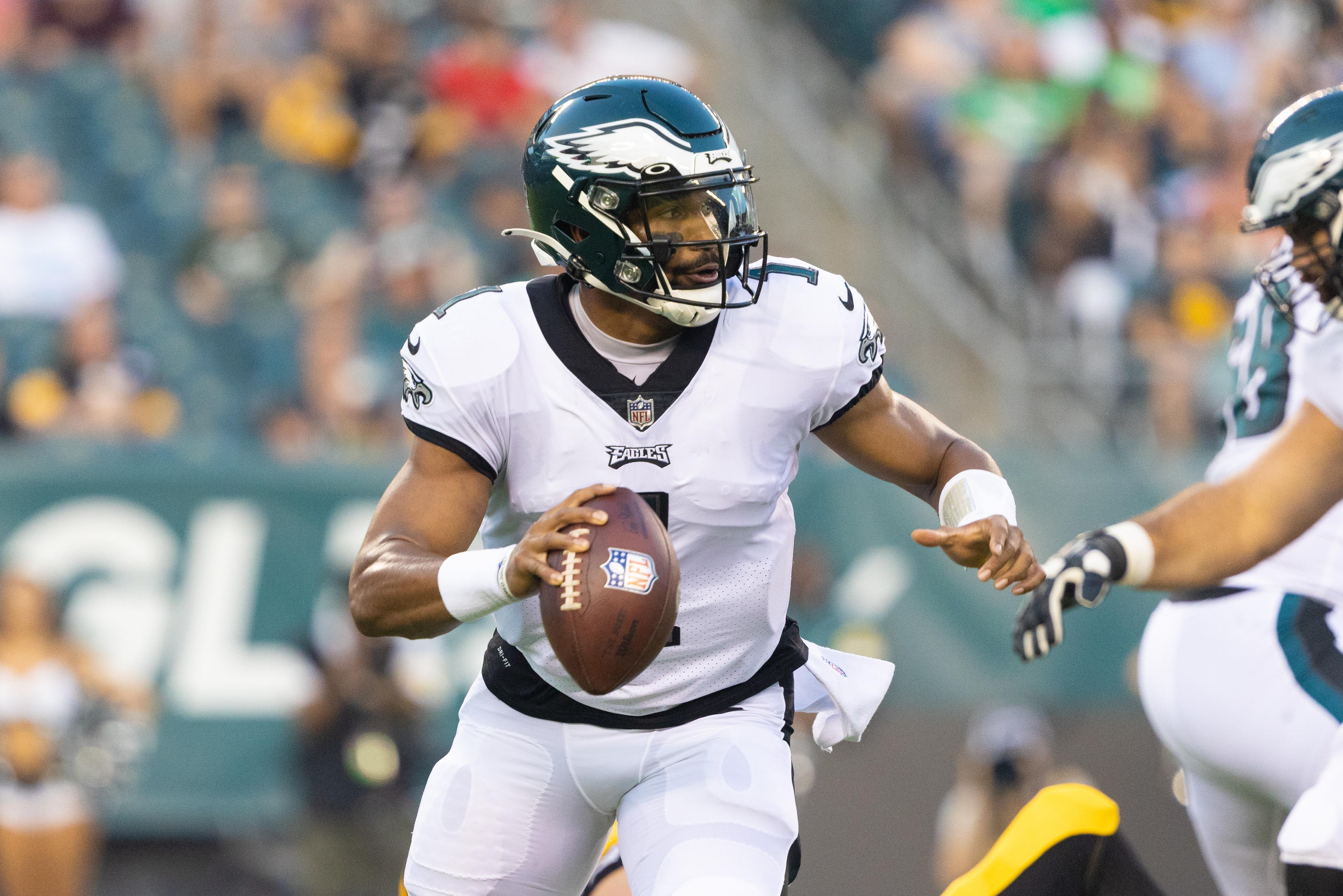 That dramatic scenario will never happen. Too bad, EYE was optimistically envisioning back in August that Hurts would run the show a whole lot better with each additional outing, and that at least the Birds would be in position to compete for the NFC East division title by late December, when suddenly Hurts would be KO’ed on a hard tackle and Flacco would come in and save the day…

The Eagles made a series of roster moves on Monday with the NFL trade deadline one week from Tuesday. Here are the moves …

The Eagles also put Gardner Minshew on the active roster and he will move up to become the team’s backup to Hurts on Sunday in Detroit.

Boom.  Pretty much all the combined roster moves signal the Eagles have declared Jalen Hurts is now in open competition for his own starting job. They also signal the team is resigned to slogging through the rest of the 2021 season without any realistic expectation of getting to the playoffs.

If true, that may be a relief to draftnik realists who understandably believe more good can come from a 4-13 season than a 7-10 season.  Even if Hurts suddenly begins to play better, there is still the looming shadow of other position deficiencies and the befuddling coaching going on and on…

If the Eagles lay an egg against Detroit on Sunday, expect a lot of grumbling in the players’ locker rooms… Fletcher Cox has already been openly critical of Jonathan Gannon’s strategy and game plans. That’s not a good sign.

HC Nick Sirianni tries to smooth things over in his press conferences. But that act is getting thinner than Jen Psaki’s hairline.

Sirianni was asked, aside from what he’s said to the coaches and players, what can he do to send a message to the team about accountability now that they’re 2-5. The head coach said that he’s keeping the same messaging as he’s had. He noted that losing a game is never acceptable, and they’re going to go through and correct problems the same way they would whether they are 5-2 or 2-5.

“We’ve talked about accountability a lot. Accountability’s not only about making corrections, it’s also pointing out when the things are right as well. So, it goes both ways there, because you want a standard met, and when the standards are met, you get excited about it. When the standards are not met, you make the corrections. So, we’re just business as usual right there. Again, things can change as far as your scheme, things can change as far as different things, but what the standard is, and the accountability, is always the same.”

This is an example of coach-speak at the most desperate level. You are either completely at a loss to explain what you are doing to make things improve, or you are just bouncing off your previous mistakes and landing on new mistakes. Accountability for bad professional football is still bad football in the end.

Then Sirianni drifted into a Biden-esque moment…

The follow-up question to Sirianni’s “accountability” answer was specifically where he thought the team was getting better, and the head coach pointed to his players getting better fundamentally and knowing the scheme and system.

“When you’re 2-5 you’re going to question a lot of things. Getting better, too, is not these drastic jumps, it’s just little-by-little each day, and so we feel like we’re getting better in a lot of different areas, figuring out who we are and what we do well.”

Shouldn’t you know by now that little-by-little “figuring it out” is not relevant to a 17-game schedule?  Does he realize he’s coaching football, not baseball?

That’s when EYE knew this season is toast.  A smart guy once said “You don’t know what you don’t know.”  If you “double down” on what you “know to be true”, what happens when it’s revealed as not true?

INJURY UPDATES— RB Miles Sanders is out for at least two-to-three weeks with what appears to be an ankle sprain.  More on that to come… Safety Anthony Harris is still on the mend with thumb and groin issues.