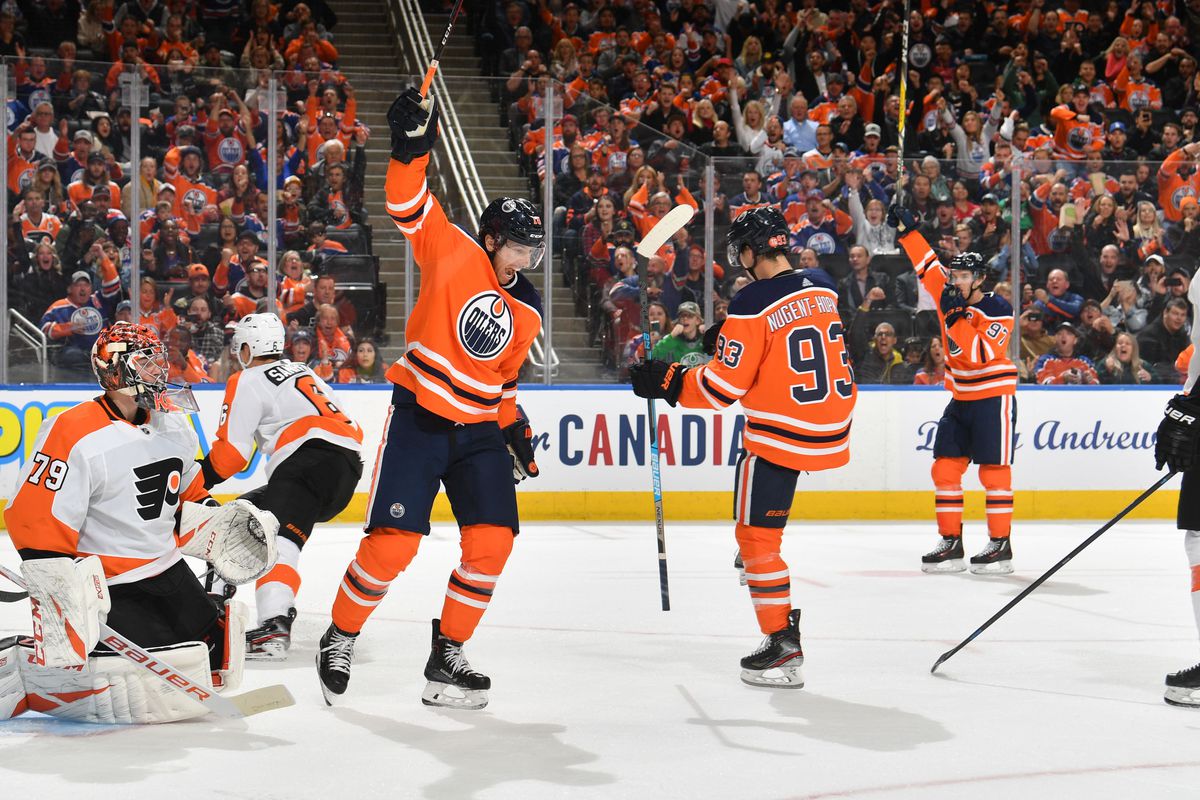 It’s been a few days since the Oilers last played, and the group will no doubt be looking to pick up where they left off when it comes to both process and results.

Outside of the barn burner against Anaheim, the Oilers have minimized the amount of mistakes, played with strong details, and brought strong efforts to the table during their 5-0-0 start to the season.

With Mike Smith still injured it will be Koskinen in net for the Oilers while the Flyers will counter with their starter Carter Hart.

Edmonton: Effort. The Oilers won’t go undefeated all season, but to see the Oilers continue to be the hardest working and most detailed team on the ice each night is all we need to worry about. Especially given the hot start it would be ideal to see this team work like they haven’t accomplished anything yet.

Forecheck. Especially given that Ellis is most likely out with injury tonight, the Oilers might be able to stall the Flyers before they can break out of their own zone with a strong forecheck. The RNH and Ryan lines should have strong nights in this regard, but we could see the Shore line get in on the action tonight if they can recapture the strong forecheck pressure they were able to establish in the preseason.

Philadelphia: Special teams. The Flyers have the league’s 4th ranked power play, but it’s still ~%10 behind the Oilers efficiency. Early on their penalty kill is lagging, sitting in the bottom third of the league. Both special teams units will be crucial if the Flyers hope to come out ahead tonight, a tall task against Tippet’s Oilers.

Edmonton: Bouchard and Barrie are likely to continue splitting time with Nurse for the time being, although if Bouchard can keep up his strong play it won’t be long until he wins the job outright.

Philadelphia: NAK is Aube-Kubel, JVR is Van Riemsdyk. The Flyers are without several players, most notably Ellis and Hayes. Braasard has filled in nicely on line 2.

Edmonton: Darnell Nurse. Like most nights the Oilers top defenceman will play almost half a game’s worth of icetime, which means he should see a lot of time against the Flyers deep and versatile forward group. Now partnered with the ascending Bouchard, this could be the early stages of one of the league’s top defence pairings. Neutralizing the Flyers attack tonight would almost assuredly result in a victory, and Nurse will no doubt be a big part of that.

Philadelphia: Defensive Additions. After a dreadful defensive performance last season the Flyers revamped their blueline, adding several veterans, not entirely dissimilar to what GM Holland did this offseason. Ryan Ellis is in all likelihood out of the lineup tonight, leaving Braun to take his place partnered with Provorov, which serves as the top pair. We should see Flyers Coach Vigneault try to get this pair on the ice against the McDavid line. Rasmus Ristolainen is with Sanheim, a pair that has been on the wrong side of early shot attempts and xG percentages, but has the physicality and defensive reputation (depends who you ask) to perhaps be deployed against strong competition. Keith Yandle has been in several Coach’s bad books over recent years, but is still a dynamic and creative passer. The Oilers will have to be wary of this, including long stretch passes off the boards behind the Oilers net. Perhaps getting McDavid out against Yandle, tired or otherwise, is a prime opportunity to victimize Yandle’s modest quickness and speed. Of course, Couturier is a premier defensive centre and will likely be hard matched against McDavid’s line.

While it shouldn’t have a huge effect on this game, the Flyers play in Vancouver tomorrow night.

Vigneault has a history of deploying players in specific ways (aka leverages), either through line matching or zone starts. Currently, of particular note, Vigneault has continued his method of playing the fourth line in statement shifts (such as after a goal against) despite underwhelming performances by the depleted line early this season.

“When you play a while in the league you realize you are never as good as you think you are or as bad as you think you are, so you just try to stay even and bring the same level of competitiveness and work ethic” is the quote from Zach Hyman yesterday that perfect encapsulates where the mindset of this group is, and why both he and the team have had so much success in the early stages of the season.

Despite not seeing much of each other over the past few years, there have been some memorable games between these two opponents, McDavid’s rookie season injury spawned a feud with Brandon Manning, while last time these teams met the Oilers chased Carter Hart after allowing 4 goals on 14 shots.

The game tonight will be on TNT in the states, the network’s first look at McDavid and the Oilers. Obviously he and Draisaitl are always players to watch, but it feels silly to say I expect a big night from Connor when he averages better than a goal and assist per game.