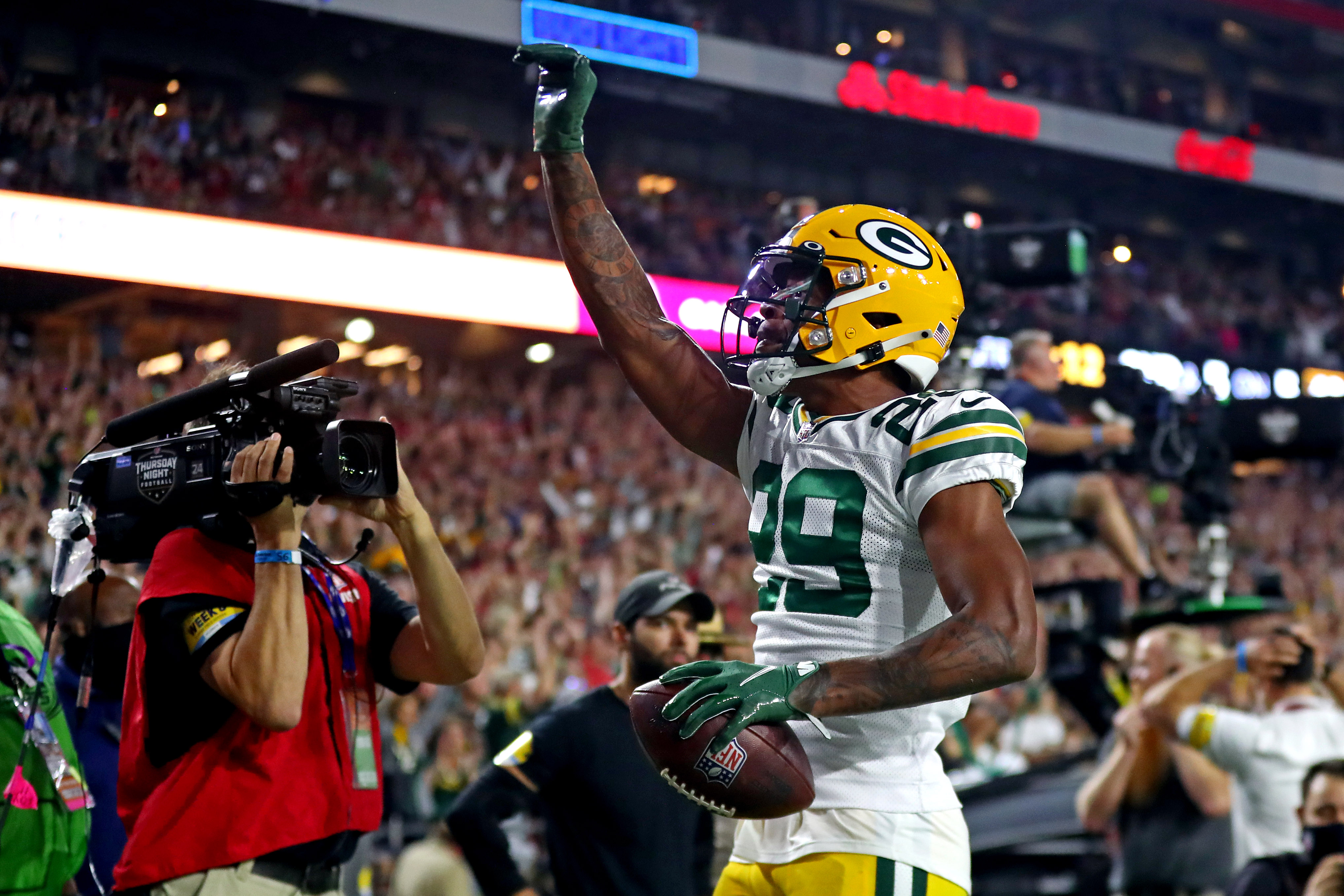 The Green Bay Packers got a last second interception by Rasul Douglas and two touchdown passes from Aaron Rodgers to Randall Cobb to defeat the Arizona Cardinals 24-21.

The Packers won the game despite a rash of injuries that had them playing without their top three wide receivers and without Robert Tonyan who was injured mid-game.

The win was the seventh straight for the Packers who are now 7-1 on the season. They are tied for the best record in the NFC with the Cardinals and now own the tie-breaker against Arizona if the two teams are tied in the standings at the end of the year.

Here are 10 things we learned from the Packers 24-21 win over the Cardinals:

How do you game plan when you are without your top three wide receivers, your starting center, your Pro Bowl left tackle and that was just on offense?

Packers head coach Matt LaFleur looked at the weapons he had and put together a game plan that leaned heavily on running backs Aaron Jones and A.J. Dillon and short, quick passes that kept the chains moving and helped keep the explosive Cardinals offense off the field. The Packers held the ball for 37:35 in this game compared to just 22:25 for the Cardinals.

LaFleur was able to make a gourmet meal without many fancy ingredients and the Packers were able to win the football game.

The time has come for Matt LaFleur to get recognition for his coaching ability. Too often, he is overlooked because members of the media mistakenly think the team’s success is all due to Rodgers. It’s time to give LaFleur credit. The Packers are now 7-0 without Adams in the lineup since LaFleur took over as coach. That is impressive.

The Packers knew they had to run the football because they were so shorthanded at receiver. The Packers also knew that defending the run was the most vulnerable part of the Cardinals defense.

Even though the Cardinals knew the Packers would be ground heavy, the offensive line and running backs did a great job of keeping the ball and the clock moving.

As a team, Green Bay rushed for 151 yards on 34 carries, a 4.4-yard average. Dillon led the way with 78 yards on 16 carries. He also held on to the football after fumbling twice last week.

Jones had 59 yards on 15 runs and a touchdown. He had another touchdown overturned by the replay booth late in the game. He also caught seven passes for 51 yards.

Dillon and Jones knew they would be a big part of the offensive game plan and they came through and delivered strong performances in the win.

The Arizona defense has been getting pressure on opposing quarterbacks all season. Even without J.J. Watt, Arizona still has players like Markus Golden and Chandler Jones who are very capable of getting after the quarterback.

The Green Bay offensive line only allowed one sack all game and it was at the line of scrimmage. Rodgers was only hit four times in this game. They also opened nice holes for the running game and on the short passes that the Packers ran so often in this game.

The Packers defense knew the offense wasn’t at full strength and that they had to find a way to stop one of the most explosive offenses in the game if the team could have a chance to win this game. They did that and then some.

The defense held Arizona to just 334 total yards and 21 points, well below their season average of 422.6-yards per game and 32.1-points per game.

In the first half, the Packers got consistent pressure on Kyler Murray and forced Arizona to punt on three of their four possessions. The Cardinals had only five first downs and 98 total yards at the half.

The defense also forced two interceptions in the second half, one by Henry Black and then the game-clinching dagger by Douglas.

Overall, the defense was effective against a high-powered offense and they did it all without their defensive coordinator, Joe Barry, who missed the game with Covid-19. They were also playing without both of their opening day starting cornerbacks in Jaire Alexander and Kevin King and their top pass rusher in Za’Darius Smith.

What a great find Rasul Douglas has been for the Packers. They signed him off the Cardinals practice squad on October 6th and he came back and made the game-clinching interception in the end zone with 12 seconds left in the game. That had to be extra satisfying for the former West Virginia star.

Douglas has helped stabilize the Packers secondary over the last three games. He stepped in on short notice and quickly found himself in the lineup. He and Eric Stokes combined to help keep the always dangerous Arizona passing attack in check for most of the game.

The Packers continued to suffer more injuries in this game. The scariest to watch was rookie running back Kylin Hill who took a hard hit directly on his knee while returning a kickoff. He did not return.

The Packers also lost defensive lineman Kingsley Keke to a concussion and tight end Robert Tonyan to a knee injury. Both left mid-game and did not return. Tyler Lancaster stepped in for Keke, Josiah Deguara for Tonyan and Malik Taylor was out to return kicks after Hill was injured.

We do not know the severity of these injuries and the Packers do have extra time now to recover before their next game in Kansas City on November 7, but all three of these players play significant roles with Tonyan and Keke being starters and Hill being the team’s primary kick returner.

The Packers lack of experience at receiver was a significant factor in this game. Other than Randall Cobb, none of the receivers out there on the field had significant game experience.

There were some highlights for these players like Juwann Winfree making his first four career NFL receptions and Equanimeous St. Brown coming up with a clutch catch on fourth down. But on several occasions, the inexperienced pass catchers failed to catch passes at the sticks to pick up first downs that the starters would have easily converted and on other occasions, there were some disappointing dropped passes.

Rodgers was clearly frustrated at times by the inconsistent receiver play, but he was able to work around it and still moved the ball. For Winfree, Amari Rodgers and Malik Taylor, these were chances to learn and grow and hopefully this experience will help them if they are called upon again later this season.

The Packers won the turnover battle 3-0 and they turned those turnovers into 10 points. A muffed punt gave the Packers the ball at the Cardinals three-yard line and led to a Mason Crosby field goal that put the Packers up 10-7 at the half.

In the third quarter, Black picked off Murray and set up the Packers at the Arizona 14. Five plays later, Rodgers found Cobb in the end zone and the Packers led 17-7.

The final turnover was the Douglas pick in the closing seconds that iced the game for the Packers.

Despite the limited offense, the Packers did not turn the ball over at all in this game. That was important as it would have been difficult for this shorthanded team to overcome those kinds of mistakes.

The Packers had issues with clock management in this game. Before the half, Green Bay had a chance to add to their 10-7 lead. Green Bay had the ball at their own 40 at the 2:00 warning with one timeout remaining. They got to midfield but took their time and had questionable play calling. The final play of the half was a Hail Mary by Rodgers on fourth down with five seconds left that fell incomplete.

In the second half, the Packers spent all three of their timeouts far too soon in a close game. Again, this was partially due to the inexperience of the receivers who weren’t always lining up in the right place.

Green Bay took their final timeout with 5:41 left in the game on a drive that came up short at the Cardinals one-yard line after Jones’ apparent touchdown was overturned by the replay booth.

Later in the drive, the Packers took a delay of game penalty because they were out of timeouts. The Packers could have clinched this win sooner if they had one more chance to stop the clock. This is something the coaching staff needs to address.

Overall, this was a memorable and gutsy performance by the Packers. This team dug deep and showed their character by defeating the NFL’s only remaining undefeated team on the road on a short week and without so many of their best players.

It is also a win that could have important consequences come playoff time. The Packers need to use their mini-bye to get healthy and prepare for the Chiefs who won’t be an easy opponent despite their recent struggles.

This was a win to remember and a win to savor.