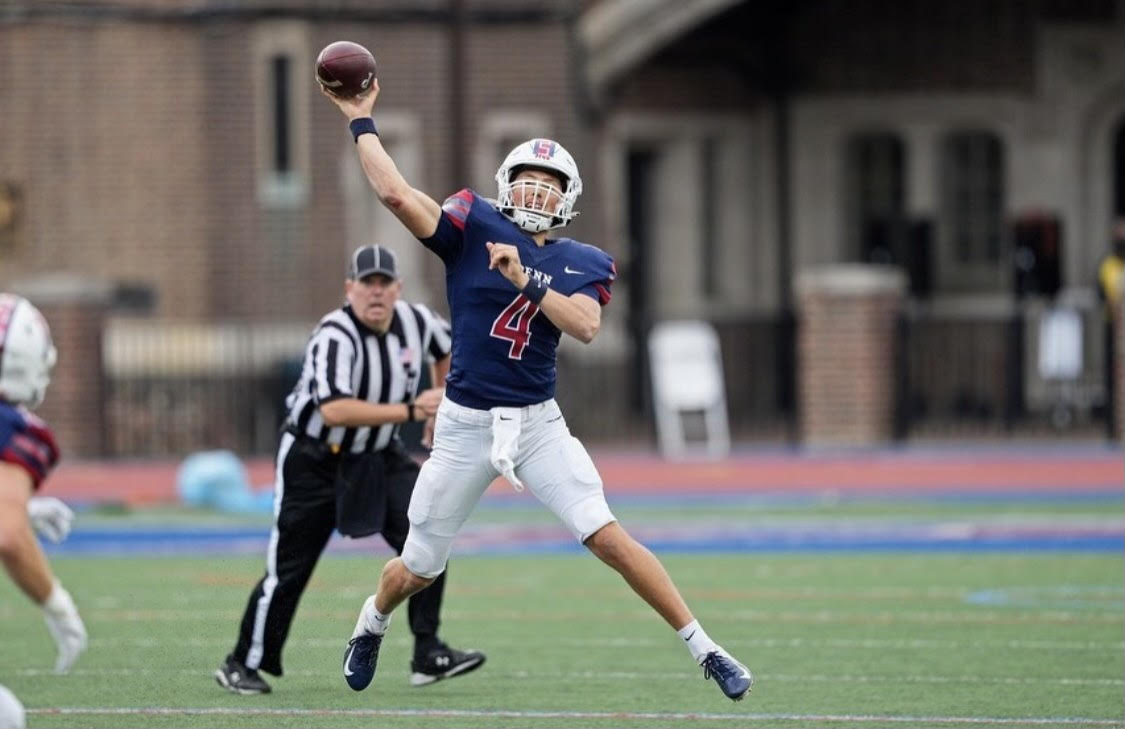 The Pennsylvania Quakers defeated the Brown Bears 45-17 on Saturday afternoon at Franklin Field.

Freshman quarterback Aidan Sayin made his second career start for Penn after debuting last week in the Quakers’ loss to the Yale Bulldogs. Sayin finished his high school football career in the spring.

“Aidan’s a very mature kid,” Quakers head coach Ray Priore said. “I know his high school coach from Carlsbad High School in California, and he just said ‘this kid got it.'” “He’s got that poise and charisma and that way about him. Some people have to think a lot, but he’s a natural player.”

“Like all the kids coming in, they’re talented when you watch a high school tape. The problem is the first pass he threw was on August 19th. When you have six other quarterbacks, how many reps can you get in the preseason to see him? We saw some things early from him, which was good, but are we going to start the season with a freshman and jump him right in? Kind of tough to do, so we waited,” Priore said.

Sayin’s best throw of the day came in the second quarter, where he evaded pressure from Brown’s defensive front and found sophomore wide receiver Joshua Casilli for the score.

“We actually messed the protection up. But I got outside and saw my guy Josh Casilli in the back of the endzone, gave him a shot, and he got it,” Sayin said.

“I’ve worked on that throw plenty of times. I think I can make any throw on the field. I just got to be confident in myself, and I know I can make the throw,” he added.

During the first five weeks of the season, Sayin was a reserve quarterback learning the offense behind senior John Quinnelly. Quinnelly started the year with a bang in the win against Bucknell but battled with an injury over the next four games.

“John played hurt after the Lafayette game. He hurt his knee and was wearing a knee brace,” Priore said. “I probably kept him in for a game or so too long. He gave tremendous effort and is a great leader for the young guys.”

The Quakers continue to utilize athlete Maurcus McDaniel at quarterback as well. McDaniel has primarily been used in the shotgun formation with three running backs.

But he did see time in a traditional shotgun formation and at receiver where he caught a seven-yard screen pass from Sayin. McDaniel is currently listed on Penn’s roster as a defensive back.

The Quakers will host Cornell next week during homecoming at Franklin Field. The Big Red are coming off a 34-16 loss to the undefeated Princeton Tigers.

“We’ve been so focused on Brown, other than the fact, that last night I got a chance to watch Cornell and Princeton on TV before I passed out for the night. They’re a good team, they’ve got a bunch of kids back, they have a lot of experience.”

“They’re always big, and physical and they’re playing two quarterbacks. From what I saw last night, the two-quarterback system is working for them. The Penn-Cornell rivalry is a big one for our alumni. Hopefully, we make them proud,” Priore added.