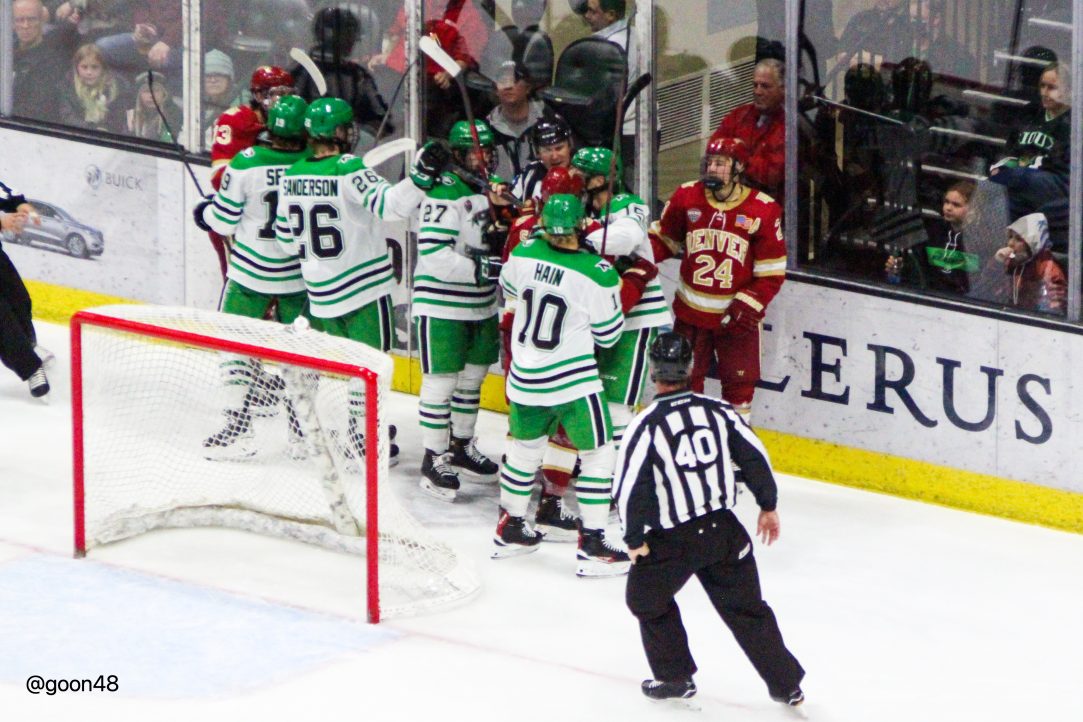 Nothing like a matchup between old friends, err, I mean old rivals. The Denver Pioneers and North Dakota Fighting Hawks don’t like each other very much. There’s a deep hatred between the two teams that have been boiling for years. On Saturday night, things boiled over. Compared to years past, it was a minor dustup. Nonetheless, things got a bit testy.

With 3:49 remaining in the game, the Pioneers lost their composure. With Magnus Chrona sitting on the bench for an extra attacker, Pioneers forward Carter Savoie hit UND captain Mark Senden in the head with a predatory elbow. There’s no doubt it was a deliberate attempt to injury. Savoie’s night ended with a five-minute major and a game misconduct.

Things would get uglier. At the 1:39 mark of the third period, Tyler Kleven hit McKade Webster with a high hit. After a short review by the on-ice officials, Kleven was assessed a five-minute major and game misconduct.

First, I imagine that both hits will probably get a look from the NCHC Head of Officials. Second, Savoie “should” be suspended for his dirty, predatory hit. Taking a page from the NHL’s Department of Player Safety: “Savoie’s hit was message sending.” Denver’s frustration was boiling over. Their top players went pointless all weekend long. Finally, their frustration boiled over.

On the other hand, Kleven’s hit was the case of a taller player going for a big check on a much smaller player and making contact with that player’s head. I don’t think it was intentional like Savoie’s. With that said, neither hit has a place in college hockey.

Tyler Kleven responds after Denver player injured his No Dak teammate. Thunderous hit and a scoreboard check. I love it @SensCentral @LalimesMartian pic.twitter.com/SePV8mFOvZ

In the last 19 games against Denver at the Ralph, UND has a 12-2-5 (.763) record against the Pioneers. Unfortunately, these were the only two games UND will play against DU in the regular season. There will be no return trip to Denver. Until we meet again.