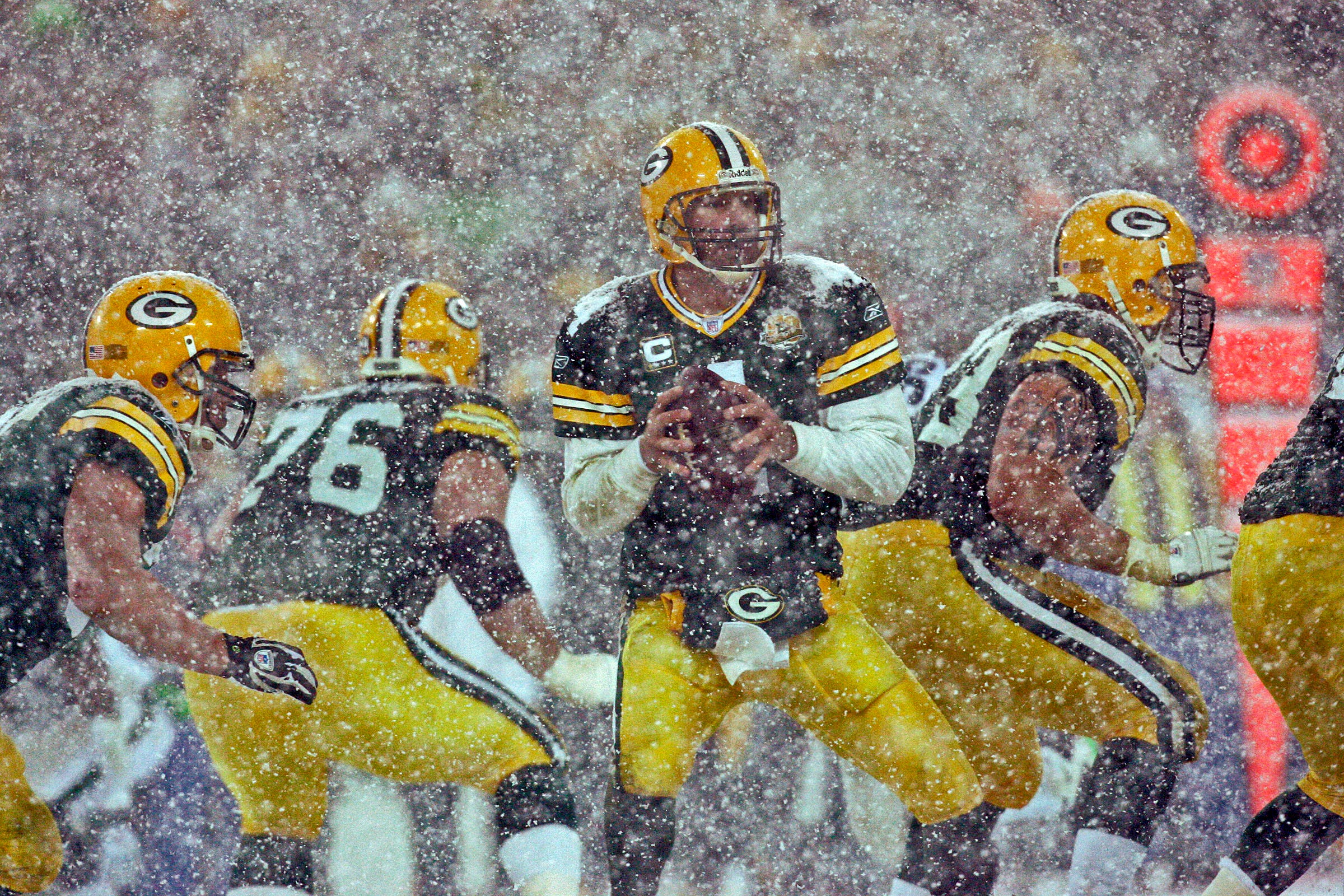 The Green Bay Packers overcame an early 14-0 deficit to beat the Seattle Seahawks in the snow to win their 2007 NFC Divisional playoff game at Lambeau Field. Running back Ryan Grant gained 201 yards on the ground and scored three touchdowns in a snowy day in Green Bay as the Packers won 42-20 to advance to the NFC Championship Game.

Nobody knew it at the time, but this game was Brett Favre’s final win as quarterback of the Green Bay Packers. His final game would come the following week in the NFC Championship Game against the New York Giants.

The game did not start well for the Packers. Grant fumbled on each of the Packers first two possessions and Seattle turned it into a quick 14-0 lead on one-yard run by running back Shaun Alexander and an 11-yard touchdown pass from Matt Hasselbeck to Bobby Engram. Green Bay trailed by two scores just 4:01 into the game.

But to his credit, Grant bounced back and had the best game of his career. The former Notre Dame star ran 27 times to set a Packers postseason record with 201 rushing yards and three touchdowns.

“Today is the type of game that tell you about somebody,” Packers cornerback Charles Woodson told the New York Times. “After two fumbles, he could have gone right in the tank, but he came back and ran as well as he ran all year.”

“We felt like we gave them 14 points,” Grant added, “I appreciate everybody staying with it, staying with me, staying on track. It’s an example of guys not backing down.”

Favre added, “He sure turned us from one-dimensional into something completely different,” when asked about Grant’s performance.

Snow started falling during the first quarter which made for a beautiful scene at Lambeau Field. It didn’t take long for the Packers to bounce back from their poor start. Favre found Greg Jennings on a 15-yard touchdown pass to get the Packers on the board midway through the opening quarter. Then Grant capped a nine-play, 64-yard drive with a one-yard touchdown run to tie the game 14-14 after the first quarter.

The Packers scored touchdowns on six straight offensive drives to put the game out of reach. On the first play of the second quarter, Atari Bigby forced Marcus Pollard to cough up the football and Aaron Kampman fell on it at the Seattle 18. Three plays later, Favre hit Jennings for a two-yard score and the Packers had a lead they would never relinquish.

Seattle pulled to within 21-17 on a 29-yard field goal by Josh Brown but the Packers finished the half with a 14-play drive that took nearly seven minutes off the clock and culminated with Grant’s second touchdown run, this time from three yards out. The Packers led 28-17 at the half.

After another Seattle field goal, the Packers added to their lead on a drive keyed by a 43-yard dash by Grant. The running back scored on a one-yard touchdown dash off the right side which gave the Packers a 42-20 lead early in the fourth quarter.

Despite the swirling wind and snowy conditions, the Packers gained 408 yards of total offense. Favre finished 18-of-23 for 173 yards and three touchdowns and no interceptions. His quarterback rating for the game was 137.6.

In this game, he became only the second quarterback in NFL history to throw for more than 5,000 yards in the postseason in his career, joining Hall of Famer Joe Montana in that elite category. Favre also improved his record to 43-5 at home when the gametime temperature was 34 degrees or colder.

Favre enjoyed every moment of playing in the snow. “I’ve been hoping for that for 17 years,” Favre admitted. “I was watching the weather all day and it’s a shame, I’m like, ‘Just give us one of those big snow games.’ I wanted to play where you couldn’t see the field, and the snowplow comes out. It keeps getting worse and worse.”

The Packers defeated some familiar faces in this game. Hasselbeck started his career as Favre’s backup with the Packers while Seahawks head coach Mike Holmgren had led the Packers to a Super Bowl win in 1996.

It was Seattle’s eighth straight playoff road loss. Meanwhile, for the Packers, it was a classic snowy playoff victory that created great memories.