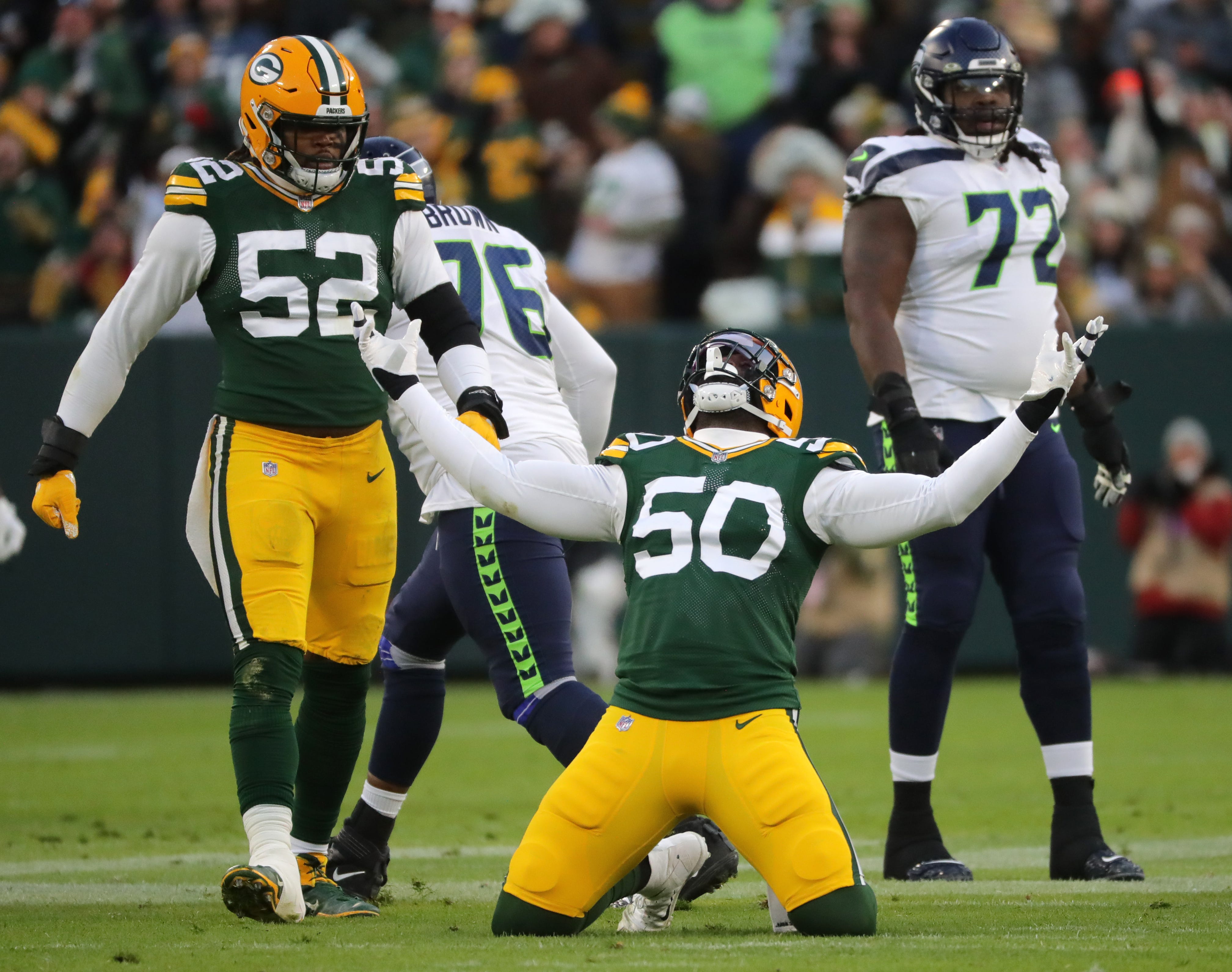 The Green Bay Packers earned their first shutout since 2018 and defeated the Seattle Seahawks 17-0 at Lambeau Field.

Aaron Rodgers returned to the lineup and threw for 292 yards in the game. A.J. Dillon ran for two touchdowns while the Packers defense shutout Russell Wilson for the first time in his 10-year NFL career.

The win improved the Packers record to 8-2 on the season and put them back as the first overall seed in the NFC playoff race.

Here are 10 things we learned from the Packers 17-0 win over Seattle:

It’s time to start giving the Green Bay defense credit. The Packers earned their first shutout since they blanked the Bills in 2018 and held the dangerous Seattle offense to just 208 total yards for the game.

How strong was the defensive play? The Seahawks only entered the red zone once all game and that drive ended when Kevin King intercepted Wilson in the end zone.

Defensive coordinator Joe Barry has his team playing sound positional defense and yet they are still aggressive at getting after opposing quarterbacks.

The longest gain of the day for Seattle was just 28 yards so the Seahawks had to earn everything they got as they tried to methodically move the ball down the field. The Packers defense didn’t let them sustain drives and the result was a shutout win for the Pack.

The injuries just keep on coming. The Packers have been losing key players to injury all season and that trend continued against Seattle.

First, edge rusher Whitney Mercilus went down with a bicep injury and did not return to the game. That reduced the Packers depth at edge.

Things got worse at that position later in the game when Rashan Gary suffered a gruesome elbow injury when a player landed on top of him. Preliminary indications are that there may not be any significant structural damage but an MRI will be conducted on Monday to determine the full extent of the injury.

Then, running back Aaron Jones suffered what appears to be a sprained MCL. It’s not clear how long the sprained knee will keep him out of the lineup and again, more tests will be conducted to clarify the extent of the injury.

The Packers next man up mentality is constantly being tested this season but they find ways to keep on winning.

Whether it was the weather conditions, the layoff due to his positive Covid test or just an off day, Rodgers didn’t have his A-game against Seattle.

He heaved up a 50-50 ball that was picked off in the third quarter and took a while to get into his rhythm. He did not throw a touchdown pass.

But by the fourth quarter, Rodgers found he could deliver those short, quick-release passes to a variety of targets and keep the chains moving and he did just that.

Although his quarterback rating was an uncharacteristically low 75.5, Rodgers was efficient and effective overall, even if he wasn’t at his best.

Marquez Valdes-Scantling had only one catch all game but it was a significant one. Rodgers found MVS for a 41-yard gain deep down the left side on the Packers opening drive of the game. It was the first time this season that Rodgers and MVS had connected on a long pass play all season.

Other teams will respect Valdes-Scantling more when he makes big plays like this and that can only help open things up underneath for MVS and the other Green Bay receivers in the second half of the season.

When Jones was injured, A.J. Dillon assumed the top running back role and he stepped up and got the job done. At first glance, his numbers weren’t outstanding, but the second-year man out of Boston College picked up a lot of tough yards and some key first downs in the second half of the game.

Dillon scored two rushing touchdowns and gained 66 yards on 21 carries for a below-average 3.1-yards per carry.

He also showed elusiveness as a receiver, gaining 62 yards on two catches including a 50-yard catch that was the longest play from scrimmage by either team in this game.

If Jones will miss a few games, the Packers will be counting on Dillon even more in the next several games.

Even though Rodgers didn’t have a great start, Adams keeps on showing why he’s one of the best receivers in the game. He finished with seven catches for 78 yards and was able to pick up some key yards after the catch.

His biggest play was a 34-yard pickup in the second quarter that helped set up the Packers first field goal of the game.

Adams continues to play at an elite level and his presence in the offense makes this team dangerous whenever he’s on the field.

Green Bay is still without Jaire Alexander but the Packers corner group of Kevin King, Eric Stokes, Rasul Douglas and Chandon Sullivan did a great job of shutting down the dangerous duo of DK Metcalf and Tyer Lockett.

Metcalf finished with just three catches for 26 yards for the game. He got so frustrated by the fourth quarter that he was ejected after he delivered an aggressive facemask penalty and took a swing at some Packers players after the whistle.

Lockett had only two catches for 23 yards all game and was generally a non-factor. In fact, the Green Bay secondary had two interceptions which matched Lockett’s catch total for the game.

The Green Bay secondary does a very good job of preventing the deep pass and their combination of man and zone coverages helped shut down one of the league’s best deep throwers in Wilson and two elite receivers in Lockett and Metcalf.

Special teams were improved in this game except for Mason Crosby’s missed field goal in the first half.

Corey Bojorquez continues to punt well and he averaged 46.7-yards per kick and placed one punt inside the 20. None of his three kicks were returned.

Amari Rodgers successfully caught all four of his punt returns and averaged 7.3-yards per runback. That’s far from elite but it did include a 16-yard runback and he looked more confident handling the ball out there.

Malik Taylor had only one kick return in this game and ran it back 32 yards. The kick coverage still could use a little more work, but overall, this game was a small step in the right direction for this much maligned unit.

Matt LaFleur stuck with the running game in this contest and it paid off for the Packers. Although the team averaged only 3.3-yards per attempt, LaFleur ran the ball 32 times which helped keep the defense fresh and off the field.

The Packers held onto the ball for an impressive 39:09 of the game compared to just 20:51 for the Seahawks.

In the second half, when protecting a slim lead, LaFleur ran the ball 19 times. It was great to see the coach learn from the mistakes he made a week ago in Kansas City when he got away from the run too soon.

With Rodgers not at 100 percent and the Seattle defense vulnerable to the run, LaFleur was smart to keep feeding the ball to Dillon, Jones and then even Patrick Taylor who got his first two career carries in the NFL and gained seven yards.

Despite all the injuries and the potential distractions this team is dealing with off the field, the Packers showed they can win games in different ways. They can run the ball and win, outscore high octane offenses if they need to or the defense can win games for them like they did today.

This bodes well for the team come playoff time, especially if they get more of their star players back and healthy. This team hasn’t played their best football yet and they are still 8-2.