Noah Syndergaard: Angel, Yet Not So Angelic

Noah Syndergaard: Angel, Yet Not So Angelic

So let’s unpack the first real development of the 2021 hot stove season:

The Angels bolster their staff with the highest-upside arm on the market — and pay a heavy price, plus a second-rounder.

To say this was a surprise is an understatement. Not so much because he went somewhere else to earn his living. It’s free agency and stuff like this happens in free agency. But that it came after Syndergaard did everything to convey his desire to return to the Mets except set it to a John Williams score is the surprise here.

"It would be a tough pill to swallow not wearing the Mets jersey next year."

Noah Syndergaard on his future: pic.twitter.com/vS72Zsypk9

Was this deceitful? No. Minds change. Things happen. Who knows what goes on behind the scenes? And who knows what was said between Noah and the Mets front office? Did Noah go back to the Mets after the Angels topped the QO offer? Did they decline? Cool, cool. But I guess my question in all this is: Why would an offer that was basically the same offer plus an extra $2.6 million, to play in a state with a tax rate that will wipe out some of that extra money (an extra $78,740 by my calculations, which means he’ll have to buy some less expensive books for his book club) enough to pull him from the team and the city that he proclaimed to love so much? Was it because of the Mets’ front office being unstable? Was it because of a matter of the heart that we don’t know about? These are questions that may or may not ever be honestly answered.

The destination also confuses me. Not from the Angels’ perspective, as it makes total sense that they would want to overpay for pitching, seeing that the last great starting pitcher they had might have been Bartolo Colón. If California was home for Syndergaard, then it would make sense. He’s from Texas. If the Rangers, who are almost as desperate for pitching as the Angels were, offered Noah the same deal as the Angels did, then it would make sense. But L.A.? And the Angels? If the Dodgers came calling with that deal, and they sold Noah on the fact that they compete for a championship every season and that he could be a huge part of that, then I could see it.

But the Angels? Outside of the fact that they have two of the most electrifying stars in baseball, the Angels are basically the West Coast Mets. So yes, this confuses me.

As for the East Coast Mets (or if you’re scoring at home: the Mets), yeah … this stinks. For a team with question marks up and down the starting rotation (I know, who doesn’t have those), having a high ceiling talent like Noah Syndergaard would have been a boon for the back end of the rotation if his injuries were truly behind him. Would you take 22 starts from Syndergaard instead of, say, 32 starts from David Peterson? I bet a lot of you would say yes.

In fact, I ran a small sample size poll. Here’s what you said:

Genuinely curious in your clicks for this poll: What would have been your preference for the back end of the rotation for the 2022 season?

The one thing I will say, and it’s in the efforts to be honest because there are always receipts out there for those interested in finding them, is this: If the Mets had this many question marks in their rotation, and they gave $21 million to a guy who pitched two major league innings since the end of the 2019 season, I would be on here with … so … many … jokes. Hell, I’ve made those jokes when the Mets signed other players that have been out of the league for years. If Noah Syndergaard was, say, a Twin, and everything else was equal, I would wonder why the hell we’re signing this big goofball with the shirtless photos taken during winters in St. Paul or some suburb of Minneapolis, which in itself would make me think he was a lunatic who would probably miss a ton of games in 2022 with a head cold. So let me at least be fair about that.

But losing Syndergaard not only stinks for this season, but it stinks because it probably feels like a betrayal to you, considering what he had been saying all along. To that I say this: I get it, but let’s also allow ourselves to learn a valuable lesson in all this. That lesson? Never trust somebody’s public persona or their “Internet Authenticity”. If you or I had met Noah and were close to him, you might get a better sense to what he’s actually thinking than what you would get following his Twitter feed.

(That’s another rant for another time. But while Twitter was supposed to be a way to get to know athletes more personally, it is in reality a window into what the athlete wants you to see. And more often than not, it’s polished and promoted. So while you might feel betrayed by Noah Syndergaard, you were in reality betrayed by Noah Syndergaard’s persona, or his social media presence, which is a betrayal only if you let yourself be betrayed. That’s a harsh way of saying “don’t trust the internet”, which probably means don’t trust me either since I’m on the Internet too.) 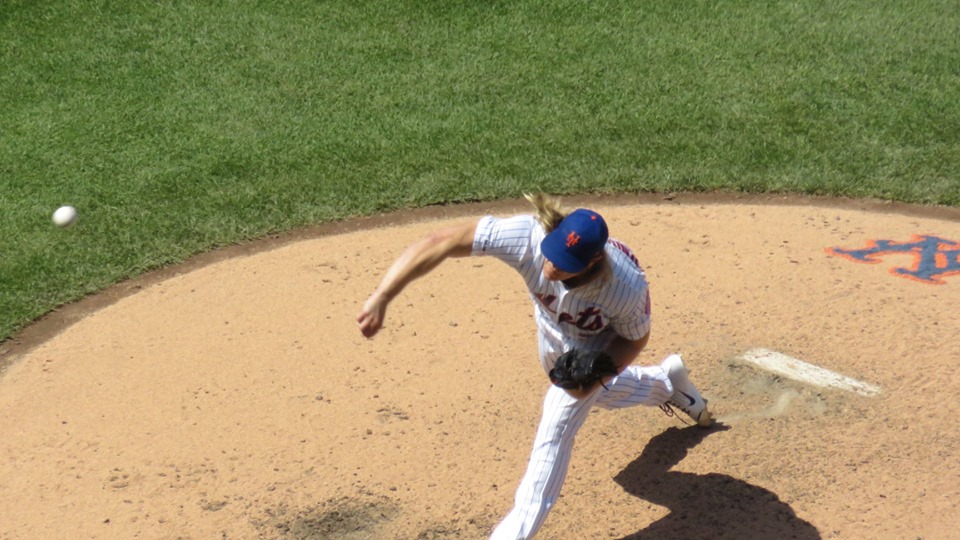 These were the days. (Metstradamus)

As for myself, I’m disappointed because I do believe that he’s going to bounce back strong this season, if there is a season. Maybe not 18-6, 2.57, but maybe 12-8, 3.94. If the Mets can get that kind of production from the back end of the rotation, at full health, then I’d sign up for it. Do I trust Billy Eppler to get that done? Do you?

I’m disappointed that Noah was not only a link to the past, but is young enough to still have been considered the present and the future. The start of the downfall of all of this, as long as we’re being honest, was Syndergaard training like a body-builder when he should have trained like a pitcher in preparing for the 2017 season. In the previous two seasons, Syndergaard won a World Series game and then outpitched Madison Bumgarner for seven innings in the wild card game. Then he decided that “Thor” was going to be more of a way of life than an actual nickname. And Tom House said that he’d be injured by June because of it, and as it turns out he was being generous. Who knows how different history would be had Syndergaard not gone down that path. (And let that be a lesson to all those pitchers that think that being “buff” is the key to hitting an untapped level. It’s not.)

I’m also disappointed quite frankly because the last time my wife got to see Noah pitch, Adam Hamari decided that he was going to be John Wayne and get Terry Collins to call him a c**k sucker for everybody to hear two years later.

Hey, that was fun. Let’s relive that:

She never got to see him pitch in person again. And a couple of weeks ago I even said to her: “hey, once Noah accepts the QO, let’s make it a point to go see him pitch. Saturday night, Monday night, Thursday night, doesn’t matter. Let’s get there for a game since it might be the last shot we get at him.”

Well, the Angels are in Yankee Stadium May 31st-June 2nd.