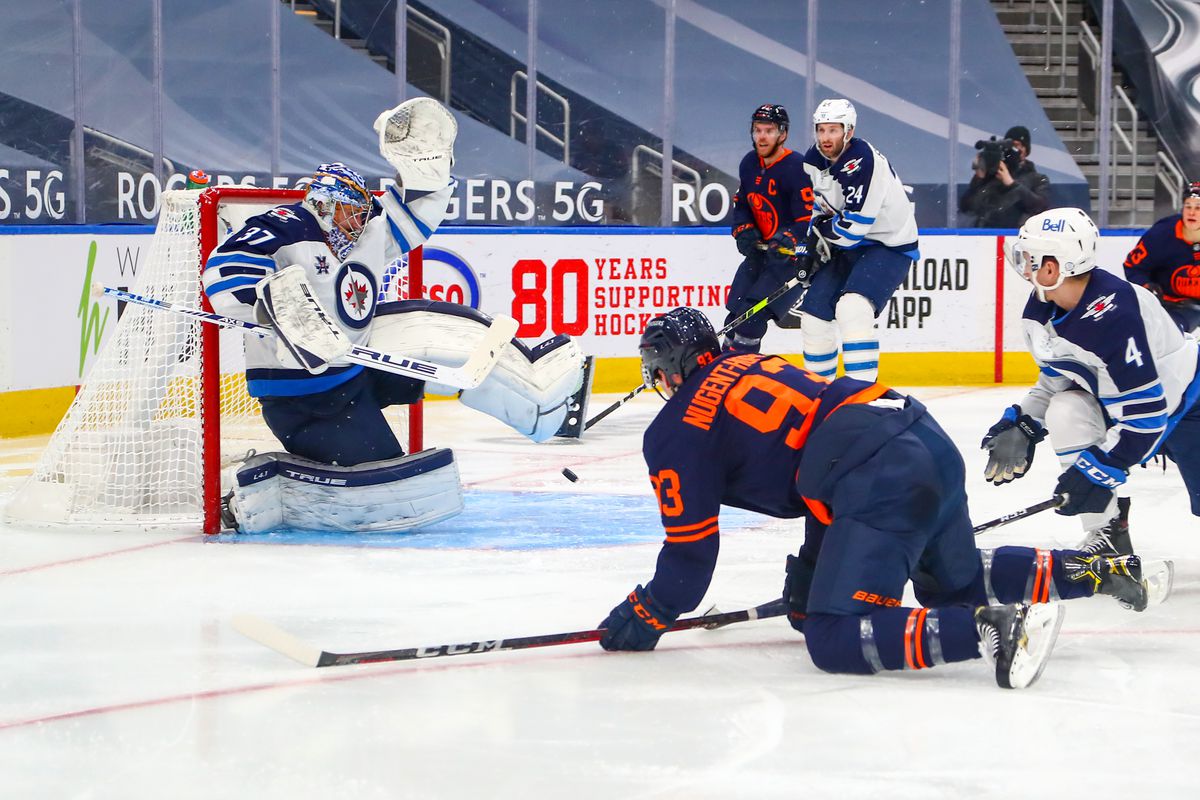 Edmonton brings its 5 game road trip, where they’ve gone 2-2-0, to a close Tuesday night against the Jets. It’s been a spirited stretch despite the .500 record, punctuated by otherworldly performances from McDavid and Draisaitl. Business as usual, apparently.

Meanwhile the Jets sit 2nd in the Central Division at 8-3-3, entering the last of a 7 game homestand where they’ve collected 9 of a possible 12 points. Of course, the elephant in the room is the first meaningful matchup between the teams since the “closest sweep ever”. Needless to say, the teams and fan bases are well acquainted with each other.

The Jets are as rested as can be expected, and we’ll likely see Hellebuyck in goal against Koskinen. The teams play each other next, Thursday in Edmonton.

Winnipeg: There’s a really high bar to beat the Oilers these days, as usual it starts with containing McDavid and Draisaitl, which comes down to:

Edmonton: it looks as though Zack Kassian is back in the lineup tonight.

Winnipeg: Stastny is out with a lower body injury, while a player I think has some potential, Samberg, is out with a high ankle sprain.

Edmonton: the Oilers very much needed secondary scoring in the form of the Ryan McLeod goal against St. Louis, but the centre is likely in for a test against the Dubois or Scheifele lines should Coach Maurice choose to get the matchup. Of course, Leon Draisaitl has his line playing at a ridiculous level, enough to keep him and McDavid separated when the Oilers are back at home.

At this point it’s pretty clear Evan Bouchard is fully established in his Coach’s trust, as he and Nurse play the most minutes and the toughest assignments. For now it’s great to have a pair to lean on so heavily, but perhaps at some point spreading the wealth a bit more by separating the two might be explored. Perhaps Edmonton doesn’t have the personnel to pull it off, regardless it’s great to see Bouchard living up to his potential.

Winnipeg: For my money, Kyle Connor is the Jets best forward. Dubois has found chemistry alongside him and Wheeler, leaving Scheifele and Ehlers to drive a strong 2nd line. The bottom 6 really speaks to the Jets team building philosophy, big defensively minded forwards, with a pair of interesting players in Vesalainen and the elder Svechnikov brother, both of whom carry some draft pedigree. Svechnikov, in particular, has been blossoming after some injury riddled seasons with Detroit. The firepower to keep pace is definitely there if the Oilers are loose defensively.

The Jets back end has been revamped and improved since last season. Schmidt and Dillon are helping their partners thrive, but if you’re a fan of hugely-tall defencemen Logan Stanley is the real deal. He looks to be beginning a good NHL career on the best blueline Winnipeg has iced in years.