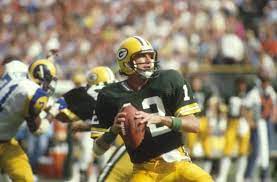 Things didn’t look good for the Green Bay Packers in their 1982 season opener against the Los Angeles Rams at Milwaukee County Stadium. They trailed 23-0 at the half and looked lethargic.

As the teams left the field at the half, boos echoed at the stadium. Starting quarterback Lynn Dickey had thrown two interceptions and lost two fumbles in the first half and the Packers had five total turnovers before the break. Running back Gerry Ellis left the game with a knee injury which further hurt the Pack. Bart Starr’s team just looked flat.

But when the teams came out for the second half, the Packers turned it all around. They scored 35 unanswered points to beat the Rams 35-23.

In the first half, the Rams took advantage of the Packers turnovers to take control of the game. Wendell Tyler opened the scoring with a four-yard touchdown run in the first quarter. Bert Jones threw an eight-yard touchdown pass to tight end Mike Barber in the second quarter and barefooted kicker Mike Lansford booted three field goals to give the Rams a 23-0 lead.

Starr said he never considered replacing the struggling Dickey at halftime. “It’s easy to think in terms of ‘maybe you should make a change’”, Starr said. “But I’ve seen too many good quarterbacks go even three quarters and not be having a very good day and all of a sudden they find it.”

In the second half, Dickey found it and he looked like a different player. The Packers came alive on both sides of the ball. The Packers got on the board with a four-yard touchdown pass from Dickey to tight end Paul Coffman and the lead was cut to 23-7.

The Packers defense stepped up and didn’t allow the Rams a first down for the entire third quarter and gave up only four first downs in the second half. The defense sacked Jones four times with Mike Douglass, Ezra Johnson, Terry Jones and Casey Merrill each trapping Jones behind the line of scrimmage.

Later in the third quarter, running back Eddie Lee Ivery scored on a three-yard touchdown run and the Packers pulled to within 23-14.

The Packers had the momentum and they kept it up in the fourth quarter. Dickey found future Hall of Famer James Lofton for a 15-yard touchdown pass and the Packers were within two points at 23-21. The score was set up by a 50-yard bomb from Dickey to John Jefferson.

On the ensuing kickoff, reserve linebacker Guy Prather hit kick returner Robert Alexander to force a fumble. Prather also fell on the loose ball and the Packers had the ball at the Rams 10. Dickey quickly took advantage and found Coffman on a 10-yard pass to give Green Bay a 28-23 lead.

The Rams tried to respond and started a drive but linebacker George Cumby intercepted Jones at the Green Bay 30 to end that threat. The Packers converted on the turnover as Ivery ran the ball 27 yards for a touchdown to make it 35-23.

Ivery had a strong game, running for 109 yards and two touchdowns and catching two passes for 32 yards. Jefferson led all Packers receivers with six catches for 116 yards while Coffman had two touchdown catches.

Jones, who was making his first start for the Rams after being acquired in a trade from the Baltimore Colts was blunt in his postgame comments. “Damn, we should have won that game,” he told reporters. “It’s tough to lose anytime, but this way certainly sticks a finger in the sore.”

After the game, Starr called the performance, “The greatest comeback I’ve ever witnessed. I’m at a loss for words to tell you how proud I am of this football team,” as his team got off to a 1-0 start. The Packers would beat the Giants on Monday Night Football the following week to get off to a 2-0 start before a players’ strike disrupted the season. The Packers finished the year 5-3-1 and made the playoffs for the first time in a decade.

University of North Dakota defenseman Tyler Kleven is a rugged, physical defenseman. The Fargo, North Dakota native is 6″4″ 214 pounds and is a physical...