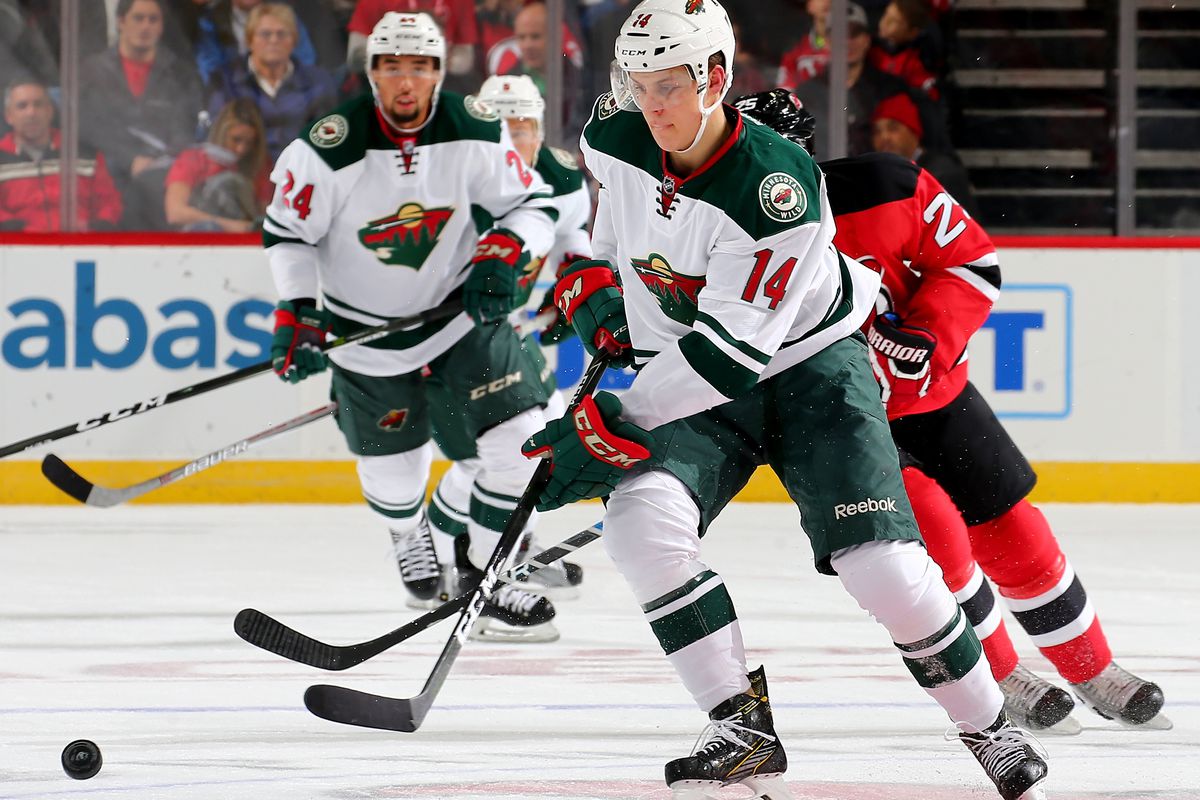 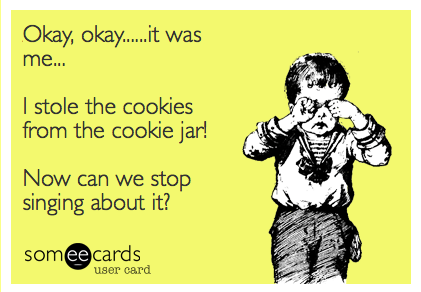 It’s amazing some times, how certain songs and rhymes from childhood suddenly come to mind. Some have better memories attached to them than others, but the fact remains, we remember many of these. I will admit, while I have no bad memories attached to the classic “Who Stole the Cookies from the Cookie Jar” activity, it is simply one that I never enjoyed. It was quite boring. There was no actual melody attached to it. And to this day, I still haven’t quite figured out what the point of it was. So, when I found the above ecard, I was kind of tickled, as it perfectly expressed how I feel about it. There are much better songs and rhymes out there, so let’s just move on. However, I wouldn’t mind an actual cookie from the cookie jar.

Minnesota beat the Devils 3-2 in a shootout last week in Newark. If the Wild players, coaches, and fans take a moment to do an honest reflection of their performance in that game, they know they stole two points from New Jersey. After a decent first period, Minnesota more or less coasted the rest of the game. It’s sad, that we’ve seen so many games like this. Minnesota should count their lucky stars, as the Devils hit the post at least four times, when they should have easily been goals. Thankfully, Cam Talbot had one of his better games, which allowed Minnesota to escape with a win in the standings.

You can bet the Devils will be very motivated to settle the score tonight. Especially since talented young center, Jack Hughes is back in the lineup. No doubt, his return will help New Jersey balance out the rest of their lines, which gave Minnesota plenty of trouble in that game. They are probably hopeful that Hughes’ return can spark their dismal power play, currently converting at 12.5%, which is 29th in the league. One player in particular who looked especially hungry last week, was rookie Dawson Mercer. The former Chicoutimi Sangueneens star has impressed with his poise, ability to slide off of checks, and his terrific hands. He’s arguably been the Devils’ biggest surprise this season. Of course he and Hughes are not the only young talent the Devils have up front. The very shifty Jesper Bratt and the young power forward Pavel Zacha can drive you crazy in the offensive zone. Zacha lit the lamp against the Wild last week. Skilled left wing, Andreas Johnsson has also been a good find for New Jersey General Manager Tom Fitzgerald. Veterans Jimmy Vesey and Tomas Tatar have brought speed even if his offense hasn’t quite arrived just yet. Nico Hischier seems to be regressing, but he might benefit with Hughes’ return as it could have him shift in the lineup to a place where his skill could benefit from having to go against a lesser line. Yegor Sharangovich had the game-tying goal the last time the two clubs played, and he’s another player who could ignite offensively with Hughes back in the lineup.

On defense, Dougie Hamilton, seems to be getting more and more comfortable as well as activating offensively (and more frequently). That’s a good thing for a team that can sometimes struggle to score. Ryan Graves seems to be adjusting to his new team after being a huge pain against the Wild in his Colorado Avalanche days. P.K. Subban is skilled, but seems less prominant now that Hamilton is there to be the assertive defenseman Subban used to be. Jonas Siegenthaler got knocked around quite a bit the last time these two teams played. One would think, he would like to return the favor.

I would be surprised if the New Jersey Devils went with anyone besides Mackenzie Blackwood between the pipes. He’s played well enough to give his team a chance to win. Although, maybe just to change things up a bit, Devils’ head coach Lindy Ruff might give Jonathan Bernier the start. As much as I think this game would be another great opportunity for Kaapo Kahkonen to play, unless he plays lights out, I’d be surprised if Wild head coach Dean Evason didn’t make Talbot the starter tonight.

While Minnesota has been playing decently enough recently, I still don’t trust them. As I mentioned earlier, they still play too many games where they have one great period, and forget to show up for the other two. It’s frustrating to watch. Yes, they’re near the top of the league in fourth place for goals for per game, but as the old saying goes, “defense wins championships.” They haven’t quite figured out yet how to stop the opposition for putting up as many goals as they do. And for as much as Minnesota scores, they also haven’t quite mastered the power play. I tend to tune out during most power plays, as it’s a good guess that they’ll spend more time dumping and retrieving, than actually spending time in the offensive zone. And then when they do get set up in the offensive zone, it’s either pass, pass, pass or they’re taking low-percentage shots with no one ready for the rebound. I know, it seems weird that someone who follows the Minnesota Wild would complain about them scoring goals, after years and years where if they managed just three goals, there would be a chance to win. However, they need to figure out team defense and the special teams quickly, because the success they’re having now, I doubt will last much longer. And I can guarantee, that Saint Louis and Nashville have Minnesota clearly in their sights.

I have nothing against Minnesota stealing a win. But I’d like to see them do it with conviction. If you’re going to win, win in a decided manner. Not in the manner they did last week against New Jersey. You can pretty much bet, they worked on their angles and shooting since we last played, and I don’t think we’ll see the pipe saving this team again. I would like to see Minnesota put up another 5 or 6 goal night with only allowing 1 or 2. If they can start to do that on a regular basis, I would feel more comfortable with this team. Instead, I’m just waiting for the shoe to drop, as well as Minnesota’s place in the standings.