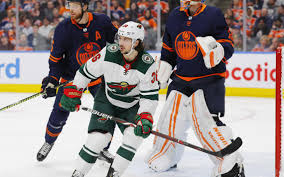 Once upon a time, in a galaxy far, far away, the Edmonton Oilers used to be a fun punchline. Year after year, they annoyed the rest of the league fanbases by winning the NHL Entry Draft lottery, to take the first overall pick, time and time again. At times, they whiffed with such notable picks like Nail Yakupov or even Tyler Hall (to a degree). The team seemed to take the highest rated forward in the draft season after season, yet it never really changed the team’s trajectory from being near the bottom of the league’s standings. In fact, it was fun to watch them continually circle the drain, even with all of those first overall picks. It became the running joke, that no matter who they picked, nothing was going to change in Edmonton. And I think everyone outside of Edmonton was quite fine with that.

However, you can only fail so many times. Finally the organization realized they must commit themselves to more than just scoring like they did with their dynasty teams of the past. The first of many chances, was to hire Dave Tippett as coach. While Tippett came to fame as a power play coach for the Los Angeles Kings, his teams have always shown an attention to detail defensively. This new focus on team defense has finally transformed the Oilers from being a two-player team that vastly underperformed to being one of the league’s better club. Funny how a focus on team defense in Edmonton has changed their fortunes, because I remember Edmonton, Colorado, and Vancouver fans being some of the biggest critics of Jacques Lemaire.

Offensively, the Oilers are led by Connor McDavid and Leon Draisaitl. They are best 1-2 punch in the NHL, as they are #2 and #1, respectively, in league scoring. There are signed these two players have slowed down a bit in recent games, but they still give Edmonton two go-to threats that few other teams in the NHL can match. Ryan Nugent-Hopkins is a set up man on Draisaitl’s line and Kailer Yamamoto, Zach Hyman, and Jesse Puljujarvi (who is back and scoring again after restoring his confidence in Finland) round out the top two lines. Providing grit and toughness for the Oilers, is resident tough guy, Zack Kassian. The rest of the Oilers bottom six forwards shouldn’t be overlooked, as they have a nice mix of speed and grit, which is exactly what a team needs from their third and fourth lines.

Defense can’t be overlooked either. On the back end, Kris Russell is a shot blocking king, while Tyson Barrie is the power play quarterback that helps keep the Oilers’ man advantage units the most lethal in the NHL. Darnell Nurse has returned from injury and Evan Bouchard is a promising young defenseman, who can do a little bit of everything. Rookie Philip Broberg and Marcus Niemelainen fill out the rest of the defense that helps make life in front of the Edmonton crease tolerable for whoever is in goal that night.

Between the pipes, Mikko Koskinen finally feels the relief of having a team that does play defensively. Not only are they playing team defense, but they’re doing so responsibly. That makes a huge difference for any goaltender. He had had his best season as an Oilers goaltender so far, and he is clearly their go-to, #1 option so far. Stuart Skinner is a relatively unknown backup, but as long as the team plays defensively responsible hockey in front of him, he looks capable in a backup role.

If there’s one place where the Oilers are absolutely lethal, it is this. There power play, has them scoring at an almost 35% rate. The best strategy to combat the power play, is simply to not give them a power play. If Minnesota can keep this to 5-on-5 as much as possible, they can keep this game as close as possible. In fact, on paper, a 5-on-5 game would be a great game to watch, as Minnesota and Edmonton are pretty even when it comes to scoring. They’re also very similar when it comes to goals against per game. Yet, when it comes to special teams, Edmonton kills most teams in the league both on the power play and penalty kill. Minnesota cannot afford to play the special teams game. With Minnesota playing as well as they have, it would not surprise me that we would be facing Koskinen. And with his recent play, it would also come as no surprise that Wild head coach Dean Evason starts Cam Talbot between the pipes for Minnesota.

While he’s on this road trip, it’s already been reported that team captain, Jared Spurgeon will not play tonight. He’s been practicing, and at this time, is expected to make his return against San Jose. Of course that isn’t exactly set in stone either, as I would think it’s a little harder to judge medical fitness after an injury while on a roadtrip as opposed to being in your home training facilities. It will be nice to get Spurgeon back in the lineup, however I have to say neither the team nor the blueline fell apart while he was out. In fact, I haven’t had a lot of complaints about Minnesota’s defensemen this season, and in fact we’ve had the surprise in the play of third pairing blueliner, Dimitri Kulikov.

So, don’t expect to face either a punchline or a punching bag. Neither is true of tonight’s opponent. We just have to hope, that we don’t become the butt of the joke in Edmonton.