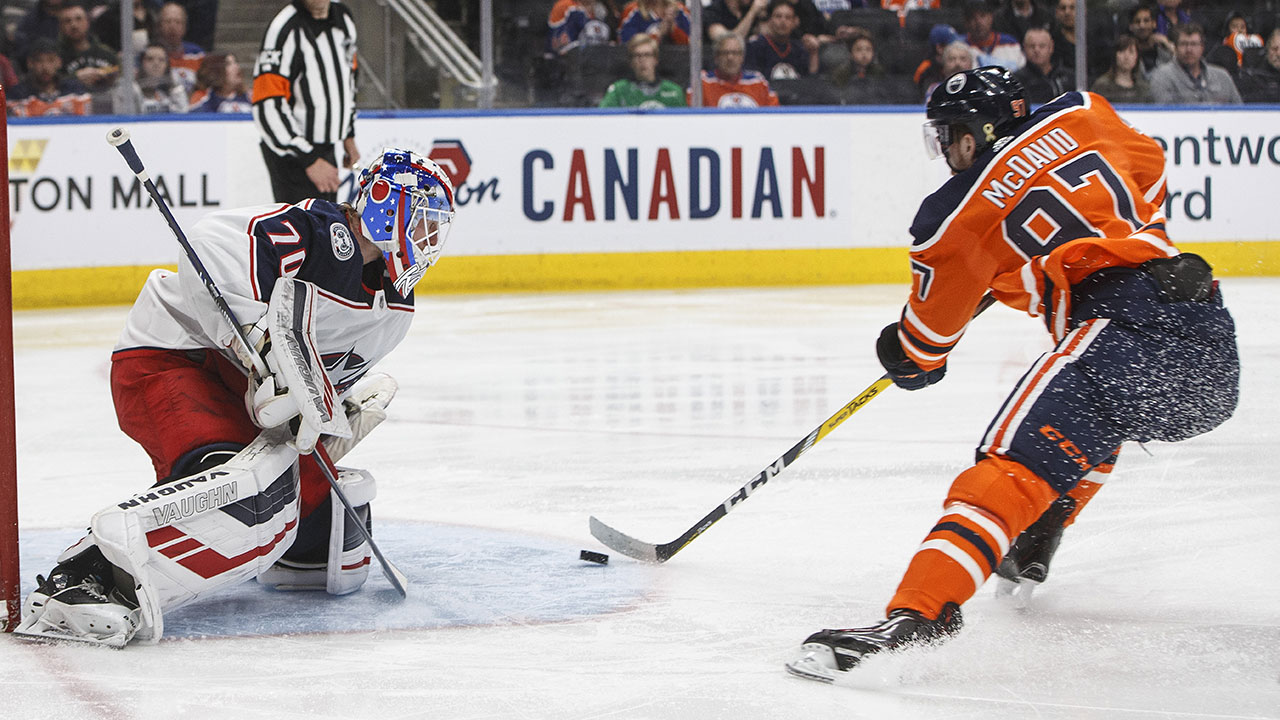 The Oilers 6 game home stand is, mercifully perhaps, coming to an end. At this point we’re all aware of how things have been going, falling behind early in 6 straight losses, all in regulation, picking up 2 out of the 14 possible points so far over halfway through December. The mood is worsening across the fanbase, yes because of the current losing skid, but also by the seemingly perpetual lack of success over the course of the McDavid era.

With COVID situations snowballing throughout the league, every team’s situation is in a state of flux, to the extent that players have been pulled mid game. Given the Oilers recently added some names to the COVID protocols list, including coach Tippett, more positive tests are a possibility as we approach game time, so you’ll have to forgive me if I don’t guess the lineup correctly. Let’s hope that no one else gets sick and that those that are make an expeditious and full recovery.

Visiting tonight are the Blue Jackets, who have probably surpassed the mild expectations most had for them preseason with their 14-12-1 record. That being said the Oilers will be taking on a weaker team than they’ve been playing of late, and are no doubt the favourites tonight as the Jackets are but 5-9-0 on the road.

Though the Jackets turned over key pieces this summer, their roster has some strong players and intriguing youth, anchored by strong goaltending with Elvis Merzlikins getting the start tonight. Desperate for a win, and with Mike Smith’s return on the horizon, it’s possible Koskinen gets another start in net for the Oilers, although he has been relied upon a bit too heavily, and I reckon Skinner deserves another start before he is likely sent back to AHL Bakersfield.

Edmonton:
K.I.S.S. aka keep it simple stupid. With things spiralling the way they are the Oilers will have to focus on their Ps and Qs. Start on time, heck score the first goal. Bring attention to detail throughout the entirety of the game, as any easy goals against would no doubt feel like a devastating blow.
Control the flow of play. We saw long stretches where the Oilers did this against the Maple Leafs, but again against a weaker opponent it would be nice to see the team put together a strong effort tonight in this facet.

Columbus:
Score early. The Jackets are not Sharks but they need to smell the blood in the water here.
Check. If the Jackets play well enough defensively in carrying out a strong game plan, they will be well positioned to take home points tonight. Don’t give the Oilers a chance to regain their confidence.

Edmonton: Smith, Koekkoek, and Russell remain on IR, Hyman is day-to-day, McLeod is in COVID protocols.

Columbus: Laine, Kukan, and Boqvist are on IR.

Edmonton: at least for a game, Foegele brought some energy to the top 6. If he’s able to mesh with McDavid it could go a long way for the depth of this roster as it would free up Hyman to a different line, perhaps even pushing Yamamoto down to the 3rd line, as his lack of production (even shots) has gone quiet. Perhaps down the road Yamamoto and McLeod can form the start of a good 3rd line, for now both Kassian and Sceviour seem like they could compliment them well. The rugged duo will be with Derek Ryan, who seems best served in a limited role at this stage of his career. Perhaps, though, his smarts will form a good compliment with his linemates. At this point the 4th line are all fighting just to stay in the lineup.

Bouchard and Nurse are a solid top pair, and amidst all the criticisms of the Oilers roster their presence should not be overlooked as a positive. I do wonder if we reach the point where the Oilers aren’t better served sharing the wealth, but there’s worse problems to have than 2 high level defenders playing well together. I do think that Keith and Ceci cover each other’s strengths and weaknesses somewhat symbiotically, and that they could be an effective 2nd pair provided that the 3rd pair is pushing them for minutes. Unfortunately, Barrie has not been able to deliver that kind of play, and I don’t think Niemelainen, Koekkoek, or Russell can prop him up enough to get to that level. At least for now Barrie is able to rack up points on the power play where he can still contribute, perhaps enough to buoy any potential trade value.

Columbus: The Jackets run all 4 lines to an extent, using special teams to boost key players’ icetime. Bjorkstrand looks better and better the more you look into his underlying numbers, and has been a nice pick for an underrated player for a few years now. Jenner won’t score 30 every year (and hasn’t even hit 20 in a while) but is exactly the type of ruthless competitor with a versatile and responsible skill set that every team could use. Texier is an interesting player with some tricks up his sleeve, and has already bounced up and down the lineup in his young career. Roslovic has moments of brilliance with high level skill, but with Domi and Voracek is a line made up of players who should be sheltered in a offensively focused role. Sillinger seems to have hit a bit of a rookie wall, but is very impressive given he was drafted in 2021. He’s a smart player who can create turnovers in high danger areas and isn’t afraid to get into middle ice and generate shots. With Nyquist’s speed on his wing this could be a dangerous line on the forecheck, especially considering Chinakhov is on the other flank. One of the most surprising first round picks in recent memory, Chinakhov has a great defensive stick and can generate takeaways, he has a shot that can be dangerous from distance as well.

Werenski is of course the main piece on the back end, averaging over 26 minutes a game. Similar to Nurse, he has the size, strength, speed, and skill to be effective in all phases of the game, including a good shot. I was very surprised that Bean only cost a 2nd round pick this summer, and especially with Boqvist out I will be focused on seeing the highly skilled defenceman’s game. Gavrikov has the physicality to be a good shutdown defender and is a strong candidate for a best-on-best team Russia, should such a thing ever happen. Peeke and Carlsson have worked their way into regular spots for now, and appropriately so given they are both approaching their mid 20s. Bayreuther is a journeyman depth defenceman who has some offensive abilities.

It’s about an hour to kickoff. There’s really not enough time to talk about the roller coaster of emotions from the win against the Giants...