Saint Louis leads the series at 3-2

Welcome to (potential) elimination day. I know, it’s not the kind of thing many of you even want to contemplate, but it’s reality. If you’ve been a Minnesota Wild fan since Day 1, you know this feeling well. Of course, those of us who have been here from the beginning were spoiled early by the 2002-03 Cinderella playoffs. But if we’re honest with ourselves, that season was special and improbable, a season that really shouldn’t have happened. But it did, and now it is forever part of our psyche. As amazing as that run was, it kind of hampers us as well. You can’t help but look back and wonder “how did that team make it to the Western Conference Finals, but this team can’t make it past the first round?” It’s frustrating, but sadly it’s part of this organization’s modus operandi.

Before I started writing this morning, I wondered what this playoffs would be like if we went back to the format from the 2002-03 season. I don’t know about you, but I really miss when the first two rounds meant you could either play a divisional or conference opponent. This having to fight your way out of the division first feels so stifling and repetitive. The only teams that have a chance of playing outside of their division in the first round are the wild card teams. This season, both wild card teams, Dallas and Nashville, are Central Division teams.  If we used the old format, Minnesota would be playing Dallas this round. Sure, still same division, but at least a little more variety than playing Saint Louis every year in the first round.

As scary as this seems, on a day where elimination is possible, it has come to light that this team almost coaches themselves. If you haven’t read Michael Russo’s most recent article on the The Athletic I highly suggest that you do. In it, Russo reports that head coach Dean Evason pretty much lets the team coach themselves. Evason still creates the lines and calls the lines, but it’s the players themselves that determine the flow of the offense. Adding to that, Evason reminds the players to keep their head in the game and to play to the whistle. Then, when things don’t go right, like after Game 5, Evason and his coaches let the players do their own meeting, and it seems the players said everything he would have. They’re a responsible and aware bunch, we just need that to play out on the ice tonight.

While it might be a bit scary having a team where it seems like the head coach it but a figurehead, it seems to work with this roster. Yes, we have highly skilled players like Kirill Kaprizov and Kevin Fiala mixed with role players and grit. But what we seem to be missing is the ego. This sense of chemistry would never have occurred this season had Bill Guerin not bought out Ryan Suter and Zach Parise. Parise may have been fine on his own, but it was Suter calling the shots. And if you heard the interview by former Predators’ teammate, Jason Arnott, you will hear the tale of the Suter that many of believed was in that locker room. Trust me people, he was not a good teammate on or off the ice.

But back to Russo’s article. In it, he points out that things changed for the Blues, when their coach, Craig Berube started making line changes as well as starting Jordan Binnington over Ville Husso. It is time now for Evason to be a coach. As Russo said, Berube “threw his lines in a blender and scrambled everything.” Now, with teams like the Blues or the Avalanche, that works as they have talent top to bottom and just about any combination would work. I don’t feel quite as comfortable completely blowing things up on the Wild’s lines, but it’s clear some adjustments need to happen. With Kaprizov, he can find the puck regardless of who he’s skating with. The concern though is that Mats Zucarello and Ryan Hartman are mostly prepared for crazy, no-look passes from their skilled linemate. I don’t know if other forwards are quite as prepared.

Berube has also been successful in making adjustments that take Minnesota off their game. In Games 2 and 3, Minnesota’s line of Jordan Greenway, Joel Eriksson Ek, and Marcus Foligno was a menace to the Blues. In Game 4, Berube countered that line with David Perron, Ryan O’Reilly, and Brayden Schenn. That adjustment to lineup resulted in grief for the so-called GREEF line. And then on top of that, the Wild failed to take advantage of a decimated Blues’ blue line. It is these missed steps and opportunities, which will be the Wild’s greatest regret. Because let’s face it, this is probably going to be Minnesota’s only chance for a while, considering the salary cap log jam that is coming their way.

I also don’t know if this is the game where Evason pulls a Berube and switches up the goaltending. I understand the reason why he’s gone with Marc-Andre Fleury for these first five games. He has the experience and Stanley Cups to back him up. However, he doesn’t have Sidney Crosby and Evgeni Malkin in front of him. He’s also older than he was in those three Stanley Cup years. I think it also is a bit of a slap to the face to Cam Talbot. Now, I’m not the biggest Talbot or goaltender fan out there. However, Talbot is a major reason why this team is where they are today. If Jacques Lemaire could make the decision to swap goalies when his team was down 3-1 in a series, then Evason can as well.

We can talk about lines and goaltenders all we want, but ultimately this team needs to find both offense and defense. Offensively, this team cannot depend solely on Kaprizov. Sure, when he scores it’s exciting, especially as he seems to make something out of nothing. However, there are 11 other skaters who can (and need t0) score as well. There is absolutely no excuse for Fiala not being in the Top Five scorers. And as an aside, he needs to stay out of the penalty box. In fact the entire team needs to stay out of the box. Everyone knows the officials are calling everything. Well everything but the Blues’ constant interference, but that’s another story. I wish I knew why this team is so ineffective at clearing the puck on the penalty kill, but that just might be one of life’s greatest mysteries.

If this team cannot adjust, then they don’t deserve to advance. Teams need to be able to overcome adversity and not just rely on what happened in the regular season. The post-season is a new season and needs to be treated as such. But until we see this team take their stand and not rest on what they did in Games 2 and 3 and what happened in the regular season, it will be another lather-rinse-repeat season of first round exits. I want to see this team be who they can be, but we need them to believe and to go out and do it. They need to come out with focus and determination, but not play so tight that it stymies creativity. And let’s face it, this is a team that plays its best when they’re having fun.

As cliche as it sounds, hockey is still just a game, so go out and enjoy it. 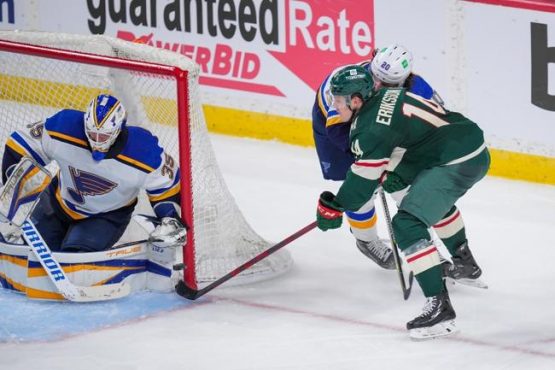