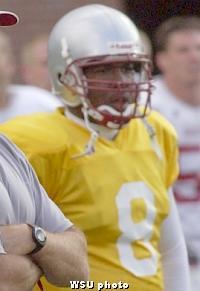 Great read on the 2005 class and how many of those kids are already playing THIS year. At least double the amount of kids are actually seeing playing time, with (get this) NINE true frosh and 3 JC’s playing already! I won’t post the article word for word as it’s a premium deal, but I’ll highlight it here:

1) The Cougars have never played as many rookies to start a season as they have this year. So far, 12 players total signed for the ’05 class have played.

2) Arkelon Hall, who hasn’t played (and absolutely won’t this year) already won the Offensive Scout Team award for the Nevada game. He’s really looking good and they are excited about his future! 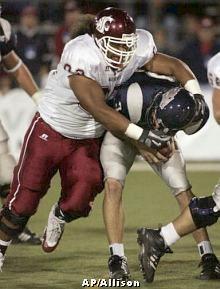 3) Ahmu is making the most impact of any frosh right now, starting at D-tackle and while overwhelmed vs. Idaho, responded much better vs. Nevada, including his first NCAA sack. It looks to be just a matter of time before he’s wreaking havoc on a regular basis. Hopefully he can do more than just hold the fort until Ropati returns, hopefully he’ll assume a regular role as being the first D-tackle off the bench to help keep the starters fresh.

4) DeWayne Patterson played really well vs. Idaho and fits in very well as the now-backup safety behind Abdullah, as well as on all kickoff and punt converages (he forced the fumble vs. Idaho on the first kickoff of the season). He also had a sack among his 5 tackles vs. Idaho.

5) Lorenzo Bursey and Lance Broadus are the two other JC transfers who already are in the mix. Doba said last week that the kickoff return team needs to get a few things ironed out because Bursey looks ready to break one. Doba also mentioned Broadus, who sprained the AC joint in his shoulder against Nevada, has some weight to gain but he sees him becoming a definite plus for the Cougs providing a speed rush off the end. Broadus’s size might indicate linebacker rather than defensive end at most schools, but most schools don’t have the trio of true freshmen the Cougs do at LB. 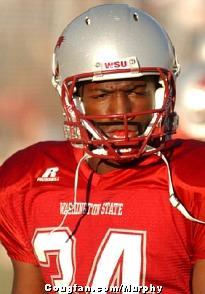 6) Courtney Williams was all over the field against the Vandals, just as he was during the WSU fall camp.The speed merchant had five special teams tackles on his way to earning the Assassin and Game Breaker weekly awards, and was nominated for Pac-10 special teams player of the week.Opponents, as evidenced by Nevada in Week Two, will put a big red X on him the rest of the way but with his speed — his 47.28 over 400-meters was at one point the nation’s fifth-best among high schoolers earlier this year — WSU’s special teams looks to have received an immediate upgrade. 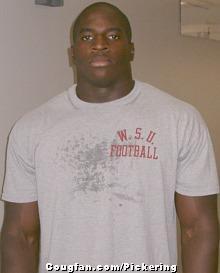 7) Oh those young LB’s! Linebackers Cory Evans (6-2, 215), Jason Stripling (6-0, 215) and Greg Trent (5-10, 230) have the coaches very excited about what the future holds at Washington State — the triumvirate already holds the No. 2 spots on the depth chart. Ferocious hitters, they all have speed to thrill. Linebackers coach Leon Burtnett said the true freshmen have things to learn, but they’re better by far than any group of freshmen ‘backers he’s had in his three years on the Palouse.Trent led all first year players with four tackles against Nevada — all solo. Evans had three and Stripling added one of his own. Oh yeah, Trent LIVES in the weight room. He looks like he means business??

8) Demaundry Woolridge with his 15 carries for 133 yards, including 70 on the one carry and his first TD (we actually scored a TD in a goal-line situation? Amazing!). Doba said Tuesday afternoon that Woolridge could remain the No. 2 running back even after Kevin McCall returns from injury. With speed, power and fearlessness, Woolridge’s crimson future looks bright indeed.

Others mentioned are Brandon Gibson, the 6-1, 195 lb kid who had his first NCAA TD vs. Nevada and has been doing a serious Jason Hill impression all through camp this fall (and many believe Gibson will turn out to be the best player in the class); Michael Willis, the 6-3, 220lb monster safety who hit Marty Martin so hard in a scrimmage that some observers said it’s one of the most brutal hits they’ve ever seen and were amazed Martin got up, albeit dazed and confused!

MAKE NO MISTAKE, the speed and talent in this class looks to provide immediate benefits this season. But over the long haul, just wait till this group gets some time under their belts.