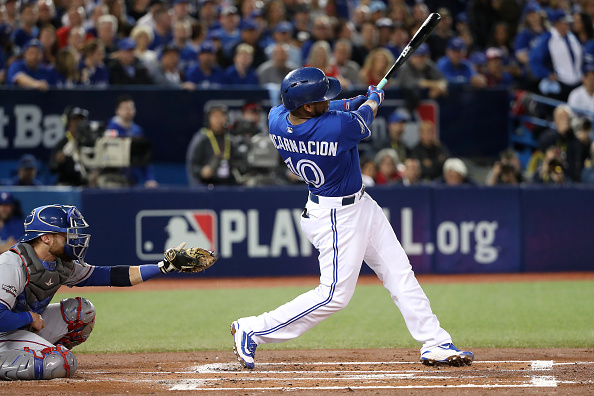 The Toronto Blue Jays and Cleveland Indians meet for a best-of-seven American League Championship series with the winner advancing to the World Series.

In the AL wild card game, the Blue Jays beat the Baltimore Orioles to advance to the American League Division Series against the Texas Rangers and proceeded to sweep the AL West champions. The Cleveland Indians swept the AL East champion Boston Red Sox handily to face the Blue Jays.

The main question for the Cleveland Indians in Game 1 is which Corey Kluber will show? Will it be the Kluber who was roughed up for five runs in 3 1/3 innings on July 3 against the Blue Jays? Or will it be the Kluber that went 6 2/3 innings in late August surrendering two runs on six hits while striking out eight hitters?

Kluber will have to keep the ball down against a Blue Jays team that hit 221 home runs during the regular season and has some of the best power hitters in the major leagues in their lineup with Josh Donaldson, Jose Bautista, and Edwin Encarnacion.

The big question for the Blue Jays is will Marco Estrada continue his two-year dominance in the playoffs? Since the 2015 American League Division Series against the Texas Rangers, Estrada has started four games, throwing a combined 27 2/3 innings, allowing six runs, striking out 21, and only walking one.

The 33-year-old All-Star will also have to deal with a speedy Indians’ team that stole 134 bases during the regular season, which does not match up well with Estrada giving up 12 stolen bases in 13 attempts. The Indians will run and Estrada must be able to quell the speed of this Cleveland team. Some of the Indians’ biggest running threats include Rajai Davis (43 SB/6 CS), Jose Ramirez (22SB/7 CS), Francisco Lindor (19 SB/5 CS), and Jason Kipnis (15 SB/3 CS).

This series, offensively, pits speed against power. On the pitching side of things, the Indians bolstered the back-end of their bullpen with the acquisition of Andrew Miller, but lost two key components of their rotation in September; Carlos Carrasco and Danny Salazar.

On the other hand, the Blue Jays will most likely rely on starters J.A. Happ, 23-year-old Aaron Sanchez, and possibly 25-year-old Marcus Stroman throughout the remainder of the series. The Indians will rely on Trevor Bauer and Josh Tomlin as their starters for the rest of the series and will need their bullpen to bridge the gap throughout the series.

PREDICTION: The Blue Jays’ power coupled with the Cleveland Indians lack of starting pitcher depth will allow the Blue Jays to overwork the Indians bullpen early on in the series. This will set the tone and the Blue Jays will win the series in five games.