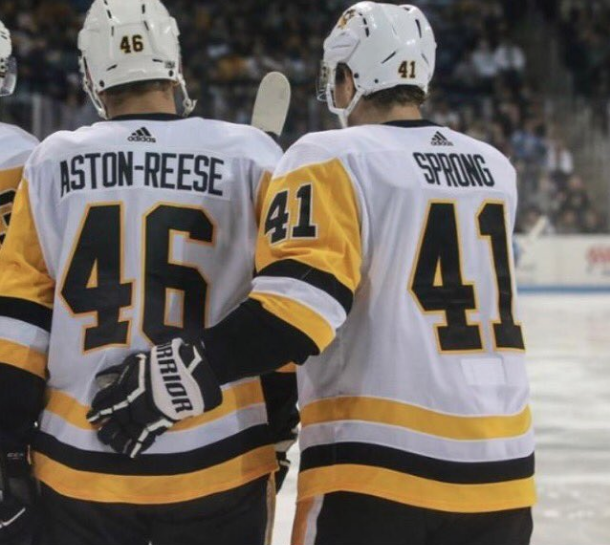 As it currently stands, there are no rookies on the Pittsburgh Penguins’ training camp roster. Notable names such as defenseman Lukas Bengtsson, as well as forwards Adam Johnson, Zach Aston-Reese and Daniel Sprong were sent down to the Wilkes-Barre/Scranton Penguins, the AHL affiliate of Pittsburgh. While I doubt, and I doubt anyone truly believes that these names will all remain in the AHL for the entire season…they may contribute to this year’s Wilkes-Barre/Scranton Penguins, heading into their 19th season, being the best yet in its storied history…perhaps even help them win their first ever Calder Cup championship. Well, just why do I think that?

Let’s start off with a history lesson: the Wilkes-Barre/Scranton Penguins have only failed to qualify for the playoffs twice in their 18-season history (this season being the 19th), and only have two first-round exists in their history. They’ve won the Macgregor Kilpatrick Trophy twice (the NHL equivalent being the President’s Trophy), and won their respective conference championship three times, and won their respective division title four times. Out of all of this accomplishments, out of all of those seasons, there’s only been one team trophy that’s eluded them: The Calder Cup (with the NHL equivalent being, of course, Lord Stanley’s Cup.) So…is this year their year? I think it might be! But, just a few more history lessons to lay out why I think this is the year.

While it’s a pretty common thought that your season is a win if you actually win the championship and a bust if you don’t, I’d like to to define Wilkes-Barre/Scranton’s best season by regular season performance mainly due to it being a larger sample size than a playoff performance (not to knock those teams that made it to the Calder Cup Final, but regular season success is more reliable for the purpose of this comparison.)

The best regular season this team has ever had comes down to their 2010-11 and 2016-17 seasons, as these are the seasons in which the team won the Macgregor Kilpatrick Trophy…but the 2010-11 season was just too dominant. With a record of 58-21-0-1 (only one shootout loss and no overtime losses!), as well as 261 goals for and 183 goals against (a goal differential of +78!!!), this team looked to be unstoppable. Sadly, they’d lose in 6 games to the Charlotte Checkers in the second round, but the regular season was truly something to be marveled. The team-leading scorer was a familiar name in winger Brett Sterling (who is currently a Chicago Wolf (…Wolve?), scoring 27 goals for 53 points in 65 games. Behind him was centerman Ryan Craig, who led the team in assists with 29 and accumulated a total of 48 points over a 71-game span. The goaltending was split between John Curry and Brad Theissen. The former played 41 games, recording a 2.44 goals against average and a .905 save percentage. The latter played 46 games, recording a stellar 1.94 goals against average and a .922 save percentage. Patrick Killeen also played a couple of games, however his numbers are…ugly. Yikes.

Anyhow, the scoring was pretty evenly spread out among the team, and they shredded the AHL with their performances. However, there wasn’t necessarily a lot of huge names on the team, with the most highly touted prospect (at that time) being Eric Tangradi. This year? This year is different.

You have Hobey Baker finalist, center and winger Zach Aston-Reese, who lead the NCAA in points with 63 in a 33 game span, and was in the top ten in Northeastern University’s scoring for every year he played there.

You have winger Daniel Sprong, who consistently set records for the QMJHL’s Charlottetown Islanders including becoming the 2nd highest scorer in the franchise’s history (and would have likely totally eclipsed the leader if he had as many games played) and never in his junior career averaged under a point per game (in fact, he averaged over a goal per game in his third and last season with Charlottetown.)

You have defenseman Lukas Bengtsson, who has a brilliant offensive skillset, NHL-caliber skating with insanely good-looking strides, and powered through postural orthostatic tachycardia syndrome (POTS) to have a fantastic rookie season, even if limited to 16 games, with WBS…to quote Bengtsson himself, who is now feeling much better after practicing a regimen which neutralizes the effects of his condition: “I have that in my back thoughts, that if I did that good in the season without knowing (about POTS), how good can I be now when I know? So I’m really excited. Of course it will take time. I haven’t played games since the sixth of January. But I take it day by day, and I’m really excited to be here.” You have college star Adam Johnson, who scored an admirable 37 points in 43 games during his sophomore season with the University of Minnesota-Duluth and was even in consideration for the third-line center position of the Pittsburgh Penguins during this year’s training camp…you have young defensemen and college offensive dynamos Jeff Taylor and Dylan Zink, you have the rigid Teddy Blueger, you have the all-star goalie Tristan Jarry…I could truly go on. The amount of young talent on this team that could easily fit in with the NHL affiliate is truly overflowing.

But it doesn’t stop at young talent. WBS legend (in my mind, anyway), AHL All-Star, and captain Tom Kostopolous is back for yet another season. Former AHL All-Stars Chris Summers, reliable offensive defenseman Zach Trotman, and the rigid Jared Tinordi — all AHL veterans in their own right — are along for the ride as well.

I won’t spend this entire piece listing the entire roster that WBS general manager Bill Guerin has assembled for this year. But what can be said is a TON of this talent has an insanely bright future, and even if you look at the present, most of them could probably play in the NHL without struggling to look the part of an NHL-caliber player. Bengtsson could easily play himself into the top six of Pittsburgh, Aston-Reese’s future is undoubtedly in the top six, and Sprong is going to shred the league with either Crosby or Malkin in the not-so-distant future. And if you’re worried about goaltending with the departure of Marc-André Fleury (which, with Murray, you 100% shouldn’t be), Tristan Jarry’s AHL all-star experience at the young age of 22 is going to take the AHL by force and, eventually, recreate a deadly goaltending duo for Pittsburgh.

This is a team with a VERY realistic chance to become Calder Cup Champions, if a Wilkes-Barre/Scranton Penguins team ever had one.