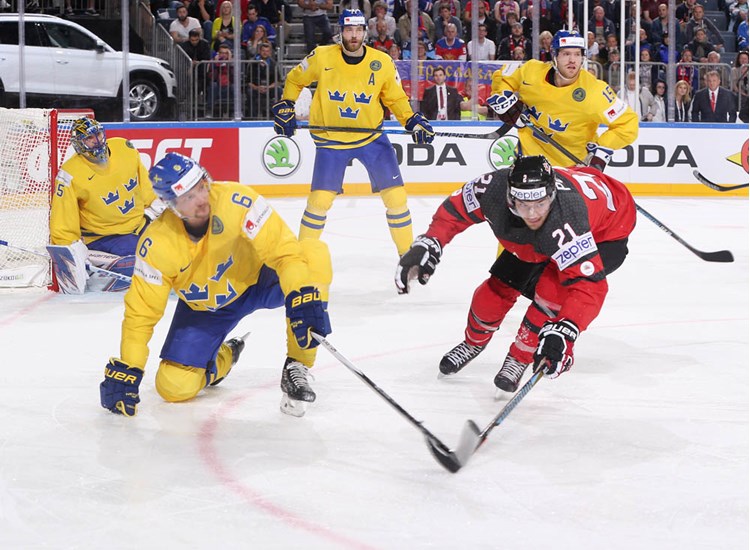 Canada, trying to win a third straight gold, has to settle for silver.

It was a game of bounces, a game full of tension from the opening minute that only got heavier as the game wore on. Canada had the better of play throughout, including superb penalty killing, but while Sweden failed to do much in the way of offense, Canada failed to translate its puck pursuit and possession into goals.

The first period was cautiously played by both sides, but that didn’t mean it was without chances. Sweden had the only two power plays of the first 20 minutes, but Canada’s penalty killers were flawless.

Canada had the best two chances to score. Mark Scheifele and Nathan MacKinnon created some speed through center ice and hooked up for a nice passing play in the Sweden zone, Scheifele finishing by ripping a shot off the post behind Lundqvist.

Later, a long Ryan O’Reilly shot was kicked out, and Matt Duchene got the rebound but couldn’t tuck it in.

Canada played flawless defense for most of two periods and had the majority of puck possession and scoring chances. An early penalty in the second to Nicklas Backstrom gave the Canadians a couple of good chances, but they couldn’t convert.

Mike Matheson made a nice rush around the Sweden goal, but no one was in front for his centering pass. Soon after Gabriel Landeskog nailed a quick one-timer, but Pickard was right there to make the save.

Backstrom took another penalty at the end of the period, and this led to the game’s first goal on a crazy play. Canada lost the puck inside its blue line and Colton Parayko tried to sweep it away. Victor Hedman backhanded the puck on goal merely trying to get the puck deep on the penalty kill, but it bounced and floated and dribbled between Pickard’s pads with only 20.8 seconds left in the period.

All that perfect defense from Canada gave way to bad luck, a fluky goal, and a 1-0 Sweden lead on a short-handed goal.

Canada didn’t score on that power play to start the third, but it got another soon after and did score on an equally strange play. Mitch Marner took a shot and O’Reilly got the rebound. His shot went off Lundqvist’s stick, off his mask, over his shoulder and in at 1:58 to even the count at 1-1.

The rest of the period felt like overtime, and both teams survived late penalties to, indeed, send the game to a 20-minute fourth period. (IIHF)

Victor Hedman had an unassisted shorthanded goal. The only goal scored in regulation.

Brayden Point was stopped in his shootout attempt.

Ever-plucky Finland rallied from a 4-0 second-period deficit to make it 4-3 in the third, but couldn’t complete the comeback.

“For two periods we were fine, then we gave our opponent a chance and they scored three goals,” said Kucherov. “We could have got nervous because there was still a lot of time remaining, but we stayed calm. We stayed confident, Vasilevski did great and we didn’t take too many penalties.”

Under head coach Oleg Znarok, Russia also won gold in 2014, silver in 2015, and bronze last year in Moscow. This bronze somewhat makes up for the disappointment of blowing a 2-0 lead after 40 minutes versus Canada and losing 4-2 in the semi-finals.

“We are happy with a bronze but not satisfied,” said Kiselevich. “We didn’t lose to Team Canada yesterday, we lost to ourselves. Canada was good, but we played a stupid third period. We didn’t play for the gold, but got a bronze.”

Mikko Rantanen had a goal and an assist, and Mikko Lehtonen and Veli-Matti Savinainen also tallied for Finland, while Sebastian Aho had two helpers. The Finns came fourth after taking silver in both 2014 and 2016. They last won the Worlds in 2011.

Goalie Joonas Korpisalo got the start for Finland, even though Harri Sateri blanked the U.S. 2-0 in the quarter-finals and made 37 saves in the 4-1 semi-final loss to Sweden. But coach Lauri Marjamaki would yank Korpisalo in favor of Sateri halfway through this game.

In front of 16,182 spectators at LANXESS Arena, the Finns gave it a valiant effort, but also made too many mistakes and let the opportunistic Russians grab a big lead.

“We had a really good game against the U.S. to make it to the semi-finals, but yesterday Sweden was a lot better than us,” said Finnish assistant captain Valtteri Filppula. “Today, we had a chance, but we couldn’t get it done. Russia played well.”

Expectations were inflated after the Finns won the World Juniors in Helsinki and the U18 World Championship in North Dakota last year. The Finns never really hit their stride at this year’s Worlds, but eliminating the unexpectedly flat American squad at least guaranteed them a respectable outcome. Head coach Lauri Marjamaki and his staff faced criticism after a last-place finish at September’s World Cup of Hockey and a lackluster round-robin in Paris.

The Russians struck first at 6:58, as Gusev’s high slap shot from the right faceoff circle flew past Korpisalo on the short side. The 25-year-old forward from Gagarin Cup champion SKA St. Petersburg has shown as a Worlds rookie.

In the second period, the Russians made it 2-0 on a 2-on-1 shorthanded break. Nichushkin exploded down the right side and sent the puck over to Tkachyov, who made no mistake at 1:48.

Korpisalo couldn’t stop Gusev when Artemi Panarin set him up down low on the power play to roof it at 7:01 for a 3-0 lead. The Finnish goalie misplayed a Kiselevich shot off his right arm and into the net just 1:07 later, and that was it for Korpisalo, as Sateri came in.

“It was difficult to come in like that, after sitting on the bench for half the game, but that’s our job,” said Sateri. “You have to be ready to jump in.”

After Russian captain Anton Belov handed the puck away in his own zone, Rantanen spoiled Vasilevski’s shutout bid, tapping in a Filppula set-up with 27 seconds left in the middle frame.

At 1:16 of the third period, Lehtonen cut the deficit to 4-2 with a long floater that bounced in off Vasilevski’s left arm. The Finnish fans got into a frenzy when Rantanen set Savinainen up in front for a power-play marker that made it 4-3 at 5:29.

Znarok had a genuine reason for concern at this point – after all, his players had already let Canada come back the day before – and called his timeout to regroup. It worked. On a solo dash, Kucherov crushed Finnish hopes, barging around defenseman Joonas Jarvinen to bang his own rebound past Sateri for a 5-3 lead at 9:49.

With nothing to lose, the Finns pulled their goalie for a sixth skater with 3:16 left. During a frantic scramble, Belov was helped off the ice after twisting his leg, and Finland called its timeout. But there wasn’t enough time to pull off a miracle.

“It’s disappointing,” said Jarvinen. “We started poorly and didn’t get the results we wanted from the round-robin. Now, to end the season in a loss is disappointing.”

Still, Finland has lots of good things to look forward to, and that goes beyond its crop of young talent. At the IIHF Congress in Cologne, it was awarded the 2022 IIHF Ice Hockey World Championship, which will take place in Tampere and Helsinki. (IIHF)

Andrei Vasilevskiy was voted goalie of the tournament.