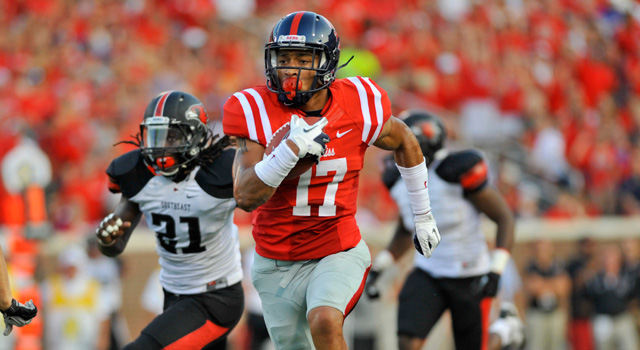 -For the South team, the quarterback battle is Tennessee’s Josh Dobbs vs. California’s Davis Webb. Webb’s arm talent is clearly the better of the two, but he has some the same lumbering concerns as a mobile passer that Mallett had without nearly the same finishing ability as a passer when off balance. Webb is intriguing, but his placement isn’t there and, when forced outside the pocket or off balance, has serious misfires.

-Josh Dobbs maybe had the better day today, but he wasn’t without warts. His footwork in drops is still a bit too slow and deliberate, even from shotgun. But his mechanics are fine, he adjusts his arm angle well and had easily the best ball placement on throws. Like Dak Prescott last year, Dobbs is taking him what his receivers  giving  him and the offense dictates, and he looks overall composed during practices (and in interviews).

-All of the running backs on the South roster showed signs of NFL value, but Matt Dayes of NC State seperated himself a bit today. He has huge hands, and it showed up in some one-on-one pass blocking and pass catching drills. He’s balanced and has plus change of direction, but it’s his subtle elusiveness without big movements at the second level that may be the biggest indicitment of his NFL upside.

-San Diego State’s Donnel Pumphrey has to prove to teams that he can be an asset at receiver, because he won’t get a chance to be a full-time runner in the NFL despite producing the most rushing yards in FBS history over his career. As a receiver, he showed plus separation from linebackers, a patience as a route runner and the separating speed to beat linebackers to the periemter and down the field. His Darren Sproles/DeAnthony Thomas comparisons may start to hold water.

– Chad Williams (Grambling State) had quite the interesting day, he started off with a blow by versus Tre White (LSU) in which White held him and he was still able to make the catch. Williams showed off his quickness off the line of scrimmage and his acceleration to get deep. During 11 on 11’s Williams made a terrific stiff arm on San Diego State’s Demontae Kazee. Coming into this week Williams was relatively unknown. Today he made quite the splash displaying his athletic ability and physicality. He even got in a fist fight with Rayshawn Jenkins (Miami FL).

–Evan Engram (Ole Miss) is just a matchup nightmare. While in-line he has the quickness to get off the ball and makes sharp breaks into his route. The separation created is just ridiculous. Engram showed off his soft hands today routinely getting past linebackers and safeties. He may not classify as a prototypical tight end, however, after this week he should firmly be a top-100 pick based off of his receiving prowess.

–LSU’s Travin Dural caught fire at the end of practice. He was finding ways to get open at the top of the route and give himself ample room to make a clean catch. Once the ball was his, Dural booked it up the field and showed off his speed. Dural may be mostly a speed threat, but there is surely value in that.

-North Caroina’s Ryan Switzer catches flak for being a short receiver, but he can play. He’s a demon when sifting through zone coverage and he makes contested catches with little trouble. Switzer was easily the best receiver at winning plays off the line during practices. None of the South cornerbacks could keep their hands on him. Size be damned, Switzer has the skills to get open versus anyone and find space.

-UCLA offensive tackle Conor McDermott still shows signs of not being able to stay on par with speed rushers or even come close to containing them for that matter. He needs to show that he can stay engaged as his recovery ability is nothing impressive as today it showed when facing Texas A&M defensive end Daeshon Hall.
-Troy offensive tackle Antonio Garcia was hyped up plenty before the week and has been at least OK so far. He showed his quickness today being more of a puncher than a hugger and showed the leg drive to power through defenders. He needs to stay lower to prevent from losing the battle against the more flexible edge rushers.
-Kentucky center Jon Toth had an up and down day. He showed the ability to stay engaged with a quick initial punch but if he didn’t gain the advantage off the snap he was toast. Toth lost the quickness and power battle when facing a couple of quick inside moves by either Alabama tackle Dalvin Tomlinson or Tulane standout defensive tackle Tanzel Smart.
Defensive Line

-One of the big winners from today was Kansas State’s Jordan Willis. While he appeared to have some lateral quickness and stiffness concerns as an edge rusher, but he limited those bend issues a bit by working between blockers with good lower half explosion and finishing through contact. He’s active, aggressive, and has the athleticism to test really well at the NFL Combine.

–Montravius Adams of Auburn had a sporadic day of ups and downs. When staying low to the ground firing off with the proper pad level, Adams was hard to contain shooting his hands quickly inside and controlling the blocker. Problem is, Adams has yet to show the proper pad level this week and he continues to get engulfed by opposing linemen.
-UCLA defensive lineman Eddie Vanderdoes shows glimpses of something promising but then will wash it away with a lack of balance and athleticism. Vanderdoes struggles to stay on his feet as he continually falls forward not even standing a chance at affecting the play. He showed impressive bend today but that may have been more of a fluke than something that may be a consistent part of his game.
–Carlos Watkins of Clemson seems to be one of the more athletic defensive tackles in Mobile. Offensive linemen had a hard time catching up with his speed as he showed off his quickness and power. He wasn’t all that effective with his bull rush today but his quick hands caused him to get by blockers.
-The short and stocky Tanzel Smart of Tulane had an average day with wow moments but also some hiccups when referencing his feet. Smart showed an effective inside rip move multiple times. When attacking as a bull rusher he showed the proper leg drive to put the blocker on skates. Smart struggled to stay balanced, as he would lean forward and fall on his face almost every other rep.

-Most of the linebackers weren’t all that impressive today, most notably Alabama’s Ryan Anderson and Clemson’s Ben Boulware. Anderson doesn’t have the top end athleticism or bend to really thrive outside of a reliable 3-4 linebacker role, and Boulware simply can’t compensate for his lack of length with bend or short-area explosiveness. Neither have helped themselves all that much this week.

-Florida’s Alex Anzalone probably had the most intriguing day, showing great range and sideline to sideline speed, including hanging with Donnel Pumphrey on a vertical route. Promising in a relatively lackluster linebacker group.

–Cam Sutton (Tennessee) was taking reps at safety, nickel corner, and outside corner today, which was noteworthy. He certainly showed his versatility with fluid hips quickly changing directions in and out of receiver breaks. Sutton was matched up versus O.J. Howard (Alabama) a few times and came away with two pass break ups right on Howard’s hip pocket. Sutton is physical and plays with the right technique to adjust.

–Corn Elder (Miami FL) rebounded today after a rough first day. He showed the ability to play press man coverage and off man today. Against Ryan Switzer (UNC) he successfully jammed him off the line and broke up the route. Later on, Elder was matched up against speedster Taywan Taylor (WKU) and stayed stride for stride. Elder’s acceleration to get to his top speed is uncanny and he plays much bigger than his frame may suggest.

-Physical corners are all the rave and San Diego State’s Damontae Kazee fits the bill. Kazee is an aggressive cornerback, both throughout the route and when attacking the ball in the air. He is the type of cornerback that won’t give any leniency to wide receivers who don’t want to play physical. Kazee runs into some penalty trouble, but his peaks make him worth it.

-Florida State’s Marquez White played “field corner” for Florida State when Jalen Ramsey was at the school, and White’s responsibilities forced him to cover more space than Ramsey. White flashed that same speed and range today. In terms of athleticism, Marquez White is probably the best cornerback on the South team. White flashed his foot speed and range during drills, as well as in 1-on-1s and team drills.