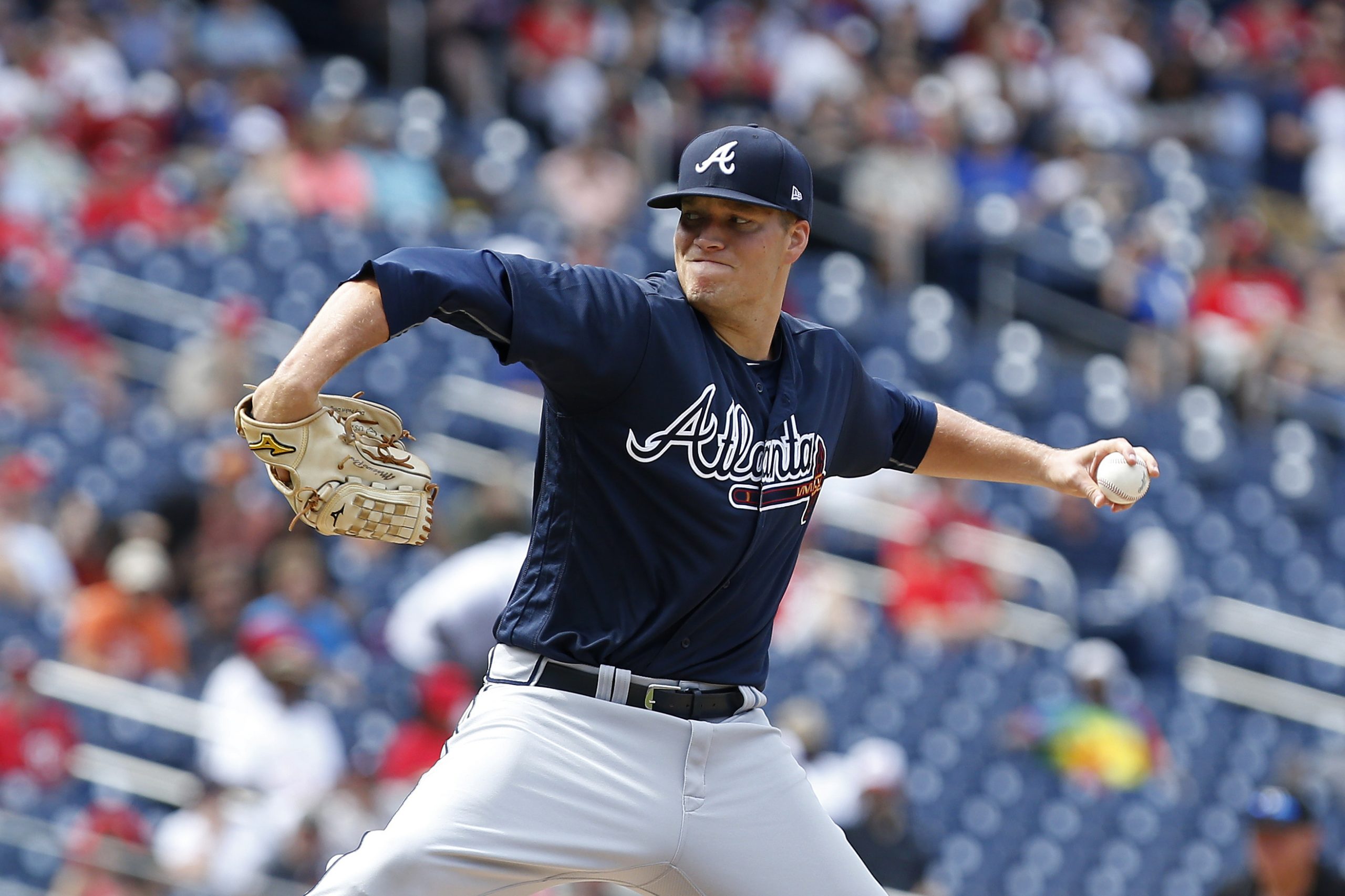 (This ongoing series looks at each player who played with the Braves in 2018 and currently remains in the organization. Today, I’m going to look at some role players who saw limited action.)

2018: Once acquired for Jhoulys Chacin early in the 2016 season, McCreery was a curious addition to the 40-man roster last winter. The 6’9″ behemoth has always had off-the-charts stuff, but as is common for Braves’ pitchers, can he control it? In 2017, the answer was no. He walked 5.5 batters per nine innings. In 2018, that number only got worse. He did make his major league debut and didn’t walk anyone. Unfortunately, he did give up four hits and two runs.

Contract Details: Turns 26 on New Year’s Eve this year. Will not be arbitration-eligible until after 2021 at the earliest and team-controlled through at least the 2024 season. Used his first of three options this season.

Previewing 2019: McCreery is difficult to hit and he’s going to get his strikeouts. But the soon-to-be 26-year-old needs to show he can throw some strikes. It’s long been his Achilles Heel and until he can change that, he remains an interesting, but frustrating prospect arm. His other big issue is the logjam among left-hand relievers. Currently, that includes Jesse Biddle, A.J. Minter, and Jonny Venters. You also add Grant Dayton, Sam Freeman, Max Fried, Luiz Gohara, and Jacob Lindgren in the mix. Oh, and other arms like Corbin Clouse and Thomas Burrows – both with better control and whose stuff is just as good. McCreery has his supporters in the front office, but his time on the 40-man roster could be limited.

Did you know? In his one performance this year, McCreery became a record holder for the Braves. With a height of 6 feet, 9 inches, McCreery is the tallest pitcher to ever play for the Braves. Gene Conley, who played for six years in the 50’s for Boston/Milwaukee, held the record for many years at 6’8″. Three other pitchers tied him – Phil Stockman in 2006, Kameron Loe in 2013, and Brandon McCarthy this season. But McCreery quite literally stands above them.

2018: Once considered a third baseman of the future when he was acquired, along with Mike Foltynewicz, for Evan Gattis, Ruiz has seemingly went backwards over the last two seasons after posting a .342 wOBA in Triple-A during 2016. His fall offensively in Triple-A is only made worse by a .189/.282/.302 line in the majors over 195 PA. If there was a bonus to his 2018 season, it was that he looked much more comfortable at first base and even logged time in left field and right field, making him a more interesting bench piece.

Contract Details: Turns 25 on May 22nd of next year. Will not be arbitration-eligible until after 2021 at the earliest and team-controlled through at least the 2024 season. Used his final option this season and will be out-of-options for 2019.

Previewing 2019: Everyone likes Ruiz. He’s a hard worker who, through sheer determination, has turned himself into a plus defender at third base. But he’s short on gifts and it shows in the batter’s box. This season, he sought to cut down on his swing and struck out a lot less (about 7% less than the last two seasons). But he also sacrificed power, finishing with his worst slugging percentage since rookie ball in 2012.

At most, Ruiz profiles as a bench player who could be an option against right-hand pitching at third base, but more of a worst-case situation. For instance, if your starting third baseman went down, perhaps you go with Ruiz and another player for a few weeks. Atlanta could have done that to open the year, but opted instead for Ryan Flaherty. Perhaps Alex Anthopoulos would have given Ruiz a longer look if he wasn’t so new on the job. Perhaps not.

Out-of-options and without a clear path to the majors after three years in Triple-A, Ruiz seems like a possible goner this off-season. Atlanta would like to get something for him, sure, but it’s likely that Ruiz will be at most a throw-in to a deal or dealt for another team’s project.

Did you know? Ruiz was drafted out of Bishop Amat Memorial High School. He’ll have a long way to go to challenge for the most hits from the school’s alumni. That honor goes to longtime Ranger Michael Young, though to be fair, he went on to attend college at UC-Santa Barbara. The most hits by a BAM HS (if they don’t call it that, they should) alumni who didn’t go to college? Danny Walton, who played nine years in the majors – mostly during the 70’s. Only 174 career hits so Ruiz needs just 143 more.

2018: The Angels gave Rivera $2.8 million last winter to back up 2017 Gold Glover Martin Maldonado. Rivera, however, spent much of the 2018 season on the shelf. He only played 30 times for the Angels, including 87 plate appearances. Atlanta acquired him right before the roster deadline on August 31 and he would only play three times for the Braves, going 0-for-4. He was on the postseason roster for the NLDS against the Dodgers, but bench coach Walt Weiss was pretty candid about Rivera’s spot. “We never get the upper hand on matchups. They’ve got All-Stars on their bench. We’ve got pinch-runners, a third catcher we never want to play.” Did someone hug Rivera after hearing that?

Contract Details: His $2.8 million contract ends after the World Series and he will be an unrestricted free agency. He has less than eight years of service time.

Previewing 2019: The Braves have already extended Tyler Flowers’ contract and are looking to improve at catcher. Rivera was just depth anyway and probably wouldn’t have made the postseason roster if the Braves had the kind of bench they wanted. Rivera has a well-earned reputation as a defense-first catcher with decent framing skills and great footwork. But when you have a career .271 wOBA, you’re never going to be anyone’s first choice.

Did you know? Rene Rivera’s first major league home run came off Woody Williams on June 26, 2005. The Mariners, Rivera’s team, lost 5-4, with Rudy Seanez and Trevor Hoffman following Williams. Hoffman is the only one of those three pitchers to throw a pitch this decade and that was 2010, the Hall of Famer’s last year.