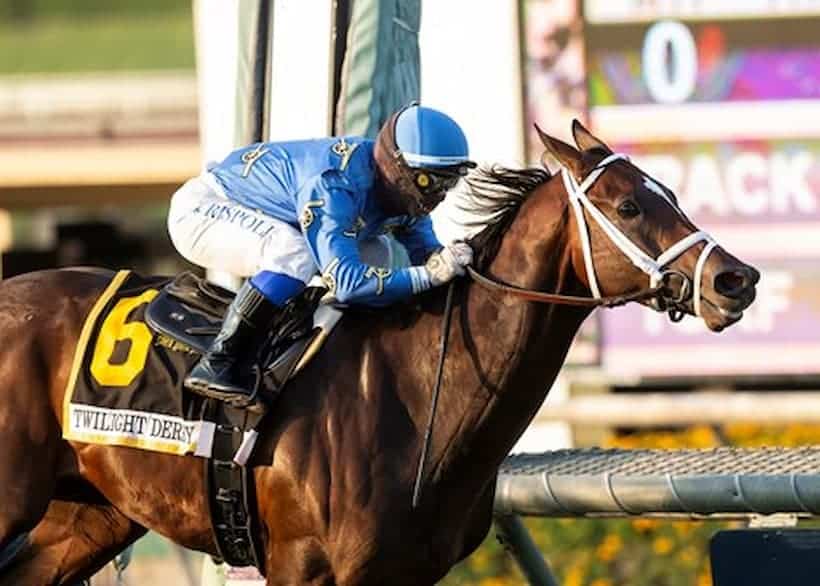 The Arlington Million is being run at Churchill Downs for the first time this Saturday, so horse racing fans will all witness a bit of US racing history. We’ve a nine strong field heading to post for the lucrative pot, so to help find the winner of the 2022 Arlington Million we’ve put together the best recent trends.

DID YOU KNOW? ALL of the last 10 Arlington Million winners were aged between 4-6 years-old

What Date/Time Is The 2022 Arlington Million?

Run over 1m 1f, the Arlington Million is for 3+ year-olds will be staged this year at the home of the Kentucky Derby – Churchill Downs racecourse – (formerly run at Arlington Park)

You can bet on the Arlington Million with BetOnline and also get a 50% welcome bonus (up to $1,000) to use on the race.

Help find the winner of Saturday’s Arlington Million using our key trends and stats. Appy these to the 2022 Arlington Million runners and find the best profiles based on previous winners of the race. (Note: The race was run at Arlington Park from 2021 back)

It’s hard to ignore the good record of the Chad Brown yard in the Million – they’ve mopped up 3 of the last four runnings, so their entry Sacred Life is sure to be popular. However, being a 7 year-old the trends suggest he’s got it to do. ALL of the last 10 winners were aged beteween 4-6 years-old and we’ve only had one winner aged 7 (or older) since 1985! 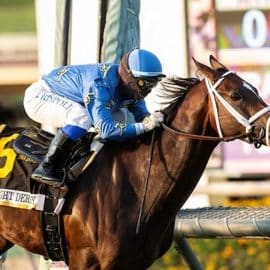 4 year-olds have the best recent record – winning 6 of the last 10, so Cellist and Santin will tick this trend. While 60% of the last 10 winners also finished in the top three. Of the 9 runners this is a plus for Cavalry Charge, Field Pass, Sacred Life and SMOOTH LIKE STRAIT @ 5/2 with BetOnline , who all hit the top three in their most recent outings.

Of that bunch, it’s the Michael McCarthy-trained Smooth Like Strait that makes the most appeal. This 5 year-old is as consistent as they come after winning 7 times and finishing in the first three in a massive 18 of his 21 starts (86%).

Being a 5 year-old he ticks the main age trends, plus after running second in thr G1 Shoemaker Mile last time at Santa Anita also fits the ‘top 3 last run’ stat.

He’s also won at Churchill Downs before (2020), when winning the War Chant Stakes over a mile. This 1m1f trip is probabaly at the high-end of his stamina limits, but he has won over the distance before when taking the G2 Twilight Derby at Santa Anita in 2020.

The icing on the cake is jockey John R Velazquez, who will bring bundles of experience to the table as he looks for his first Million win.

Of those at bigger prices, the Dallas Stewart runner CAVALRY CHARGE @ 20/1 with BetOnline can outrun his odds. Yes, his recent form has been patchy but he’s a winner here at Churchill Downs over this 1m1f trip. His last win was back in February in the G3 Fair Grounds Stakes and had Santin, who is much lower in the betting here, back in fourth that day too.

A recent second in at Indiana Grand was a fair prep run for this and being a 5 year-old also is one of 7 (of the 9 runners) that tick the age stat. Regular rider David Cohen rides.

See below the nine 2022 Arlington Million runners and their profiles, plus the latest betting odds from with BetOnline

This Juddmonte-owned 6 year-old gelding has been handed gate 1 and we’ve only seen one Arlington Million winner from the inside draw in the last 10 runnings (but these were run at Arlington Park). Trained by Brad Cox, he was last seen finishing fifth of 11 on July 15th in the Forbidden Apple (G3) at Saratoga – beaten 3 1/4 lengths. The Dansili gelding did, however, win two starts ago as the 2/1 market leader in the Dinner Party (G2) at Pimlico, while since 2015 we’ve seen two 6 year-old winners of the Arlington Million (Mondialiste and The Pizza Man)

Trainer Chad Brown is the main man when it comes to the Arlington Million – he’s landed the big pot three times in the last four runnings. He runs Sacred Life this year in a bid to enhance that record. The 7-year-old has been handed gate 2 and comes here in wining form after landing the Monmouth Stakes (G3) in New Jersey on 18th June.  He’s been freshened up since, but despite coming from a yard you have to respect in this race, Sacred Life is yet to place better than third from his four previous Grade 1 starts. Finally, being a 7 year-old also looks a big negative – the last 10 Arlington Million winners have been aged between 4-6 years-old, while since 1985 we’ve only seen one winner aged 7 or older (The Tin Man, 2008).

Handed draw 3 and will represent trainer Mike Maker, who is yet to win the Arlington Million. Finished third in the Arlington Stakes here at Churchill Downs – going down by only a neck. Since then, after finishing second in the Texas Turf Classic at Lone Star Park (16th July), the 5-year-old Lemon Drop Kid horse was elevated to the winners’ enclosure after stewards decided first-place finisher Megacity, who also runs in this race, interfered with him in the home stretch.

Handled by the California-based Michael McCarthy and heads into the race being given draw 4. The 5 year-old has got a very consistent profie with five silver medal finishes and a bronze from his last 6 races. His last win now came back in May 21 in the Shoemaker Mile (G1) at Santa Anita, so does have winning form at the top table. John Velázquez, who is yet to win the Arlington Million, is expected to get the ride and will be Smooth Like Strait’s third different pilot in his last three races. One of the leading chances.

Another from the Mike Maker yard and has been give gate 5. This 7 year-old will get an opportunity to turn the tables on Field Star after he was deemed to have interfered with the horse in the Texas Turf Classic this season. The gelding’s six wins have included five allowances and one maiden. This will be Megacity’s first time in a Grade 1 race, but the age trend (being a 7 year-old) suggests he’s got a lot to do.

Trained by Brendan Walsh, this Godolphin-bred 4 year-old won the Turf Classic (G1) on Kentucky Derby day here at Churchill Downs over the same course and distance as the Arlington Million. He’s since, however, finished a poor sixth in the Manhattan (G1) at Belmont Park (11th June) after rider Tyler Gaffalione, who will ride again here, lost his crop in the closing stages. With proven track form and age on his side it would be no shock to see him bounce back. 6 of the last 10 Million winners have been aged 4. Another that looks to have a big shout.

Drawn 7 and another of the older horses in the race at 7-years-old in the race. Trained by Brian Lynch, and is also another that has track form under his belt after winning the Arlington Stakes (G3) here at Churchill on June 4th. His overall form at the track is decent too (3-3-1-1) so might be one for the place players, but will need to become the oldest Arlington Million winner since The Tin Man (2008).

Gate 8 for this Dallas Stewart-trained 5 year-old. Heads here with a bit to prove as he’s not won in four starts – his last win came on 19th Feb in a Fair Grounds Stakes (G3) and had Santin in behind that day too. This gelding has since finished second in his most recent race in the Jonathan B. Schuster Memorial at Horseshoe Indianapolis on 9th July.

This 4 year-old is drawn to the outside post in 9. Trained by Rusty Arnold Cellist is a two-time stakes winner who has track-winning form too. He won here over the longer 1m4f trip, so we know he stays, but the worry on that front is will he have the pace to keep up with the rest? On a plus, he’s got a good record at this venue, so the switch here is in his favour and 6 of the last 10 winners of the Million have been aged 4.

RELATED: Arlington Million To Be Run at Churchill Downs On Saturday 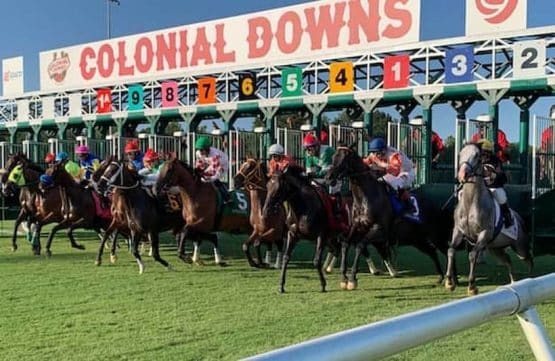 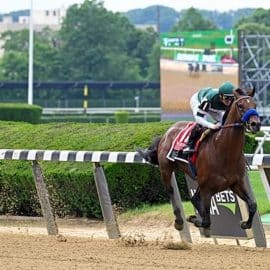 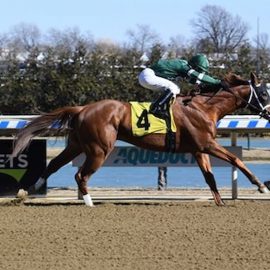 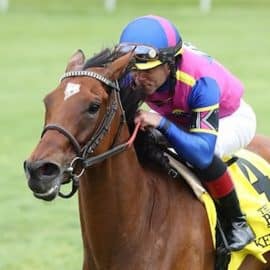 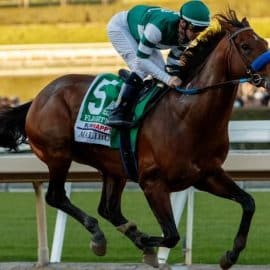 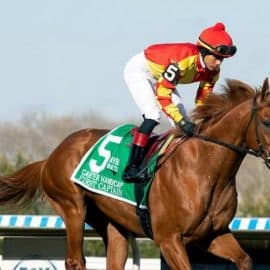 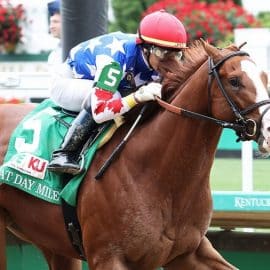