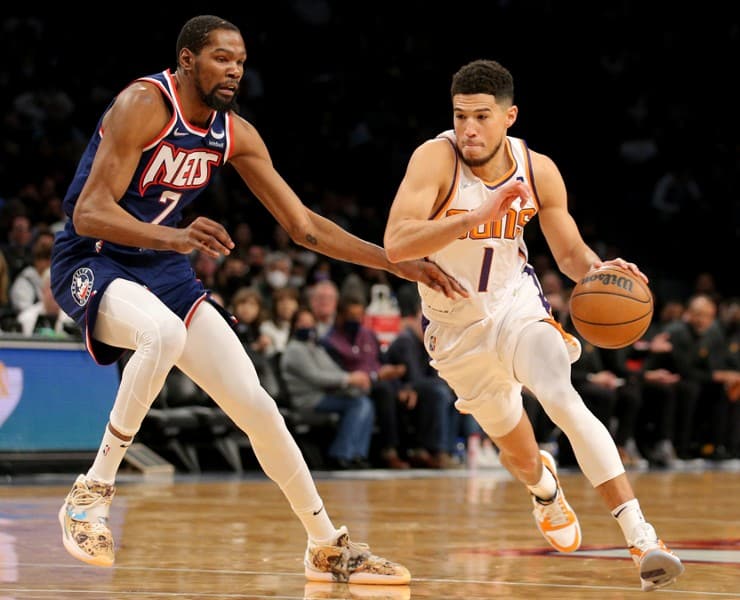 With NBA free agency underway this offseason, the 2023 NBA championship odds have been updated; the Suns are now the top favorite. Per the BetOnline sportsbook, the Suns have +600 odds of returning to the NBA Finals and winning their first championship in the 2022-23 season.

Other NBA betting picks, news, sports betting content and rumors are under the tab above.

Last season, the Suns finished 64-18 (.780), ranking at the top of the Western Conference. One of the latest NBA trade rumors pertains to Devin Booker and Kevin Durant. If Nets G.M. Sean Marks pulls the trigger on this trade, the move would impact the Suns’ title odds for next season. Then again, maybe the trade won’t happen. Find out why down below.

Moreover, Kevon Looney and Gary Payton II are currently negotiating new contracts with the Warriors front office. If Golden State can retain Looney, the center will help keep the team’s title odds for the 2022-23 season in the top 3. Check out the BetOnline list of the top contenders’ 2023 NBA championship odds.

In the 2021-22 season, after the Suns beat the Lakers in their season finale, they finished with a franchise record 64 wins. During the 2022 NBA Playoffs, the Suns lost in seven games versus the Mavericks in the second round. Last season, Phoenix became just the third team in NBA history to have 64 or more wins and not reach the conference finals.

Regarding the Durant-Booker NBA trade rumor, put it to bed. It’s not happening. An argument can be made that such a move would neither benefit nor hurt either team. In reality, due to the Ben Simmons situation, Devin Booker is on the list of players who cannot be traded to the Nets for Kevin Durant. A team cannot have two players signed to a designated rookie extension deal.

Furthermore, Booker signed a four-year, $214 million contract extension with the Suns on Thursday. In a total of 68 games played in the 2021-22 regular season, Booker averaged 26.8 points, 5.0 rebounds and 4.8 assists per game. If Durant gets traded to Phoenix, the Suns will likely remain the top favorite for next season.

Durant and Booker would be unstoppable, Ayton and Bridges traded?

On the other hand, Durant averaged 29.9 points, 7.4 rebounds and 6.4 assists per game in 55 games played. Statistically, the two-time MVP is the better player. So, why not have both Durant and Booker together on the same team? Add Chris Paul into the mix, too. It would be a heck of a trio.

Paul signed a multi-year contract extension with the Suns in 2021 as well. He put up 23 points per game versus the Pelicans in the first round of the postseason. As for Booker, he averaged 23.4 points, 5.3 rebounds and 4.6 assists against the Mavericks in the second round of the playoffs.

Additionally, two players on the trade block for Phoenix right now are Deandre Ayton and Mikal Bridges. Ayton led the Suns in rebounds last season, averaging 8.9 rebounds per game. And the center averaged 17.9 points per game. As for Bridges, he played every game last season.

The forward averaged 14.2 points, 4.2 rebounds and 2.3 assists per game. Not only would the Nets receive Ayton and Bridges, but the team would also acquire multiple first-round draft picks. The deal sounds ridiculous; however, a king’s ransom is to be expected for a superstar talent. Other articles related to the NBA top favorite are on the main page.