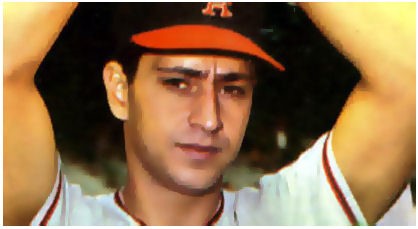 “This crowd about to explode. Ball one, strike one the count. Can he do it? … There’s two men away … Belinsky now looks out toward center field … turns, walks back on the hill … and the 1-1 pitch … is swung on, it’s popped up into shallow left field … into foul territory goes Torres … it’s going to be a no-hitter … IT’S A NO-HITTER FOR BELINSKY! (Radio partner exclaims “Whooo hoooo!”) Belinsky a no-hitter! How about that one? Belinsky, in his fourth Major League start, has startled 15,000 fans here tonight. His teammates mob him. And I have (pause) seen my third no-hitter.”

It’s hard to blame announcer Buddy Blattner for getting so wrapped up in the excitement of Belinsky’s no-hitter that he felt compelled to drop in that personal detail at the end of his call. After all, nobody expected the former pool hustler from Trenton, N.J., to pitch a no-hitter in his fourth major league start. Not even Belinsky himself.

“If I’d known I was gonna pitch a no-hitter today, I would have gotten a haircut,” he said after the game.

And that, in a nutshell, was Bo Belinsky in 1962 – always conscious of his image, even when his on-field successes were actually keeping up with his off-field ones. No starting pitcher likely got more mileage out of 28 career victories than Robert “Bo” Belinsky.

“Bo had more fun off the field than he did on the field,” said former big league first baseman Mike Hegan. For an amazing couple of months of the Angels second season, however, Belinksy meant good times whatever he was doing.

Freed from minor league purgatory in the Orioles organization the previous November when the Angels selected him in the Rule 5 draft, Belinsky immediately felt right at home in Los Angeles, where both the baseball and society writers ate up his antics. Despite having spent five years in the minor leagues with the Pirates and Orioles, Belinsky held out for an additional $2,000 on his rookie contract.

And then an amazing thing happened: Belinsky actually appeared to be worth it. He won his first start, April 18, 3-2 over the Kansas City Athletics. Then he beat the Indians, 6-2, on April 25 at home, and again on May 1, 8-6, at Cleveland.

Back at Chavez Ravine and starting on three-day’s rest, Belinsky found himself flirting with something other than a Hollywood starlet.

He struck out the first two Orioles during a 1-2-3 first, but a walk and hit batter put him in a jam in the second. Belinsky escaped, however, thanks to a groundout and another strikeout. In the fourth, the Orioles loaded the bases with one out following two walks and an error by third baseman Felix Torres. But Belinsky struck out Dave Nicholson and Ron Hansen flew out to deep center field to end the inning.

Meanwhile, the Angels pushed across single runs in the first and second, but were held to only three hits of their own for the next six innings. Didn’t matter. Belinsky got stronger and retired 12 of 13 Orioles heading into the ninth.

Jackie Brandt struck out to start the inning, Belinsky’s ninth and final strikeout of the game. Then Gus Triandos grounded out to Joe Koppe at short, setting up the final showdown with Nicholson, who’d struck out twice. Nicholson popped out to Torres in foul territory and Belinsky made history, throwing not only the first no-hitter in Angels history, but the first at newly-built Dodger Stadium.

Unfortunately, Belinsky’s story doesn’t stop there, though, as the promising rookie’s drinking and carousing finally started to catch up with him. He lost 9 of his final 12 starts and finished what once seemed like a dream season a mediocre 10-11.

1963 got worse as he slumped to 2-9, making just 13 big league starts and seeing his ERA swell to 5.75. 1964 was better (9-8, 2.86), but an August hotel room fight with Los Angeles Times writer Braven Dyer was the last straw for the Angels, who suspended Belinsky for the remainder of the season and shipped him off to Philadelphia for Rudy May and Costen Shockley later that winter.

Belinsky’s star burned bright and fast in Los Angeles, but for an expansion team with no previous sense of identity, for a couple of years he was the face of the franchise. And though his pitching didn’t always match, Belinsky made sure that face looked good.