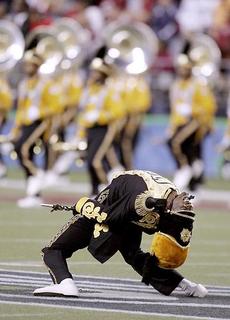 Just one thing, really. Not much to complain about in a 48-7 blowout win, but, as Doba said, the team was flat in the second quarter. You could tell he could see this one coming, talking up Grambling all week, repeatedly saying he doesn’t want the team to lose their focus, the bye week is staring them in the face, it’s a 1-AA opponent, blah blah BLAH!

It felt a heck of a lot like the Idaho game, as we were up 14-0 7 minutes into the first quarter, but then we let up. Brink didn’t play so well in the first half, just 8-for-15 for 112 yards. I know the stats say he wasn’t sacked, but Rooster was there and he saw it, Brink took some serious shots in that first half. They blitzed a lot, sometimes bringing both safeties and even though Brink made them pay, he took some hits. In the post-game Brink said it was tough in the first half since they hadn’t seen tape of them this year, only back to last year, but they adjusted well and blew them out the rest of the way.

Like Doba said, these guys have some athletes, although as Rooster would probably also acknowledge, the Cougs were CLEARLY the superior team in terms of speed and athleticism. That said, the Grambling O and D lines were HUGE! They look big on paper, but in person, they were gigantic! As Rooster said after the game, “they all looked like French from Wildcats (the Goldie Hawn football movie!?), and he was right! Mkristo said it best in describing Jonathan Banks, a 6-8, 360-lb O-tackle: “The guy I was playing against was the biggest human being I’ve seen in my life.” He wasn’t kidding. They were HUGE, but alas, awfully slow, thus the 7 sacks.

A few nuggets – Brink and Hill have something special going, even all the way back to the Colorado game last year. They were in the same recruiting class of 2003, and Brink said the time they spent working with each other that first year laid a good foundation. His first TD catch yesterday was just perfect, Brink threw a great ball in the corner of the end zone and Hill elevated and made a great catch, showing just how fantastic his hands really are.

It’s amazing also to think that Hill has only been a starter for 14 games in his WSU career, and he already has 18 career TD catches, already 6 in 3 games this year. Oh yeah, he’s just 4 TD’s away from the school record of 22! The way the Beavs pass D looked vs. Louisville, he might tie that record on 10/1!

Notice that Loren Langley is 100% for the season? 15-for-15 extra points, 5-for-5 field goals. I don’t care who you are playing, if you have an accurate kicker that is money inside 40 yards, that could be a huge difference once conference play starts. Look back to the 2002-2003 seasons, Drew Dunning saved several games for us that year (kept us in the Apple cup in ’03, basically won the New Mexico game in ’03 with 5 FG’s, the USC game in 2002, etc). As poor as the kicking game was last year, it’s clearly improved this year and will play itself out over the season.

All that said, looking ahead, we’re starting to get a better picture of who is good and who isn’t in the Pac. Here’s the way I see it:

Elite: USC obviously (how about this? Their first 8 plays vs. Arkansas? 4 TD’s!)

How will things play out for our Cougs? I think it’s clear now that the key to the season is going to be the next 3 games. @OSU, then home for Stanford and UCLA. We must win 2 of those 3 games, period, or else bowl hopes could be in serious jeopardy. With the brutal run of 5 games to close the season after that (@Cal, @USC, ASU, Oregon and UW), it’s likely we’ll be underdogs in at least 4 of those games, and the 5th one at the end of the season, well, I won’t even say it!

It’s just so hard to know where we are given the quality of the 3 teams we just played. Is the Idaho win worth anything now that they were blown out vs. UW? Is the Nevada blowout on the road worth more now that they beat UNLV – who beat Idaho the week before? Yes it was nice to outgain Grambling by better than 2-to-1 in total yards, but what does that even mean??

Doba said it as did a few players after the game on the radio, but this bye week is coming at a good time. Doba elaborated that a lot of players have papers due later next week, so for Monday, Tuesday and Wednesday, they will NOT practice. Only studying. Then they’ll get after it on Thursday and put in extra time on OSU. So in more ways than one, this is a great time to take a breather. Meanwhile let OSU try and “find themselves” against ASU. If they thought Louisville threw the ball well, wait until they get a load of ASU’s passing attack! They could be a seriously down-in-the-dumps team come 10/1.